is world-renowned as a hotbed of footballing talent – and it seems its zoo animals are no exception.

So much so that ‘s newest baby polar bear has been named Hertha, after the city’s largest football team, because of her prowess with a ball.

Hertha was born on December 1 in the city’s Tierpark zoo and is the heir to late lamented superstar Knut, who drew huge crowds to a rival zoo, Berlin’s Zoological Garden, until he died suddenly in 2011. 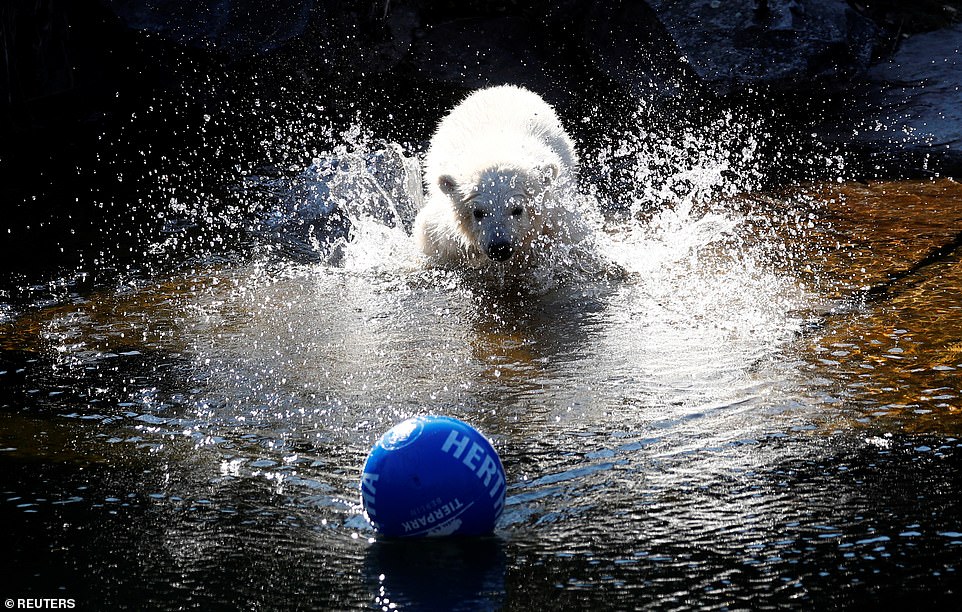 The Tierpark Berlin zoo named its female polar bear cub Hertha, after the city’s main football team, on Tuesday three months after she was born in December last year 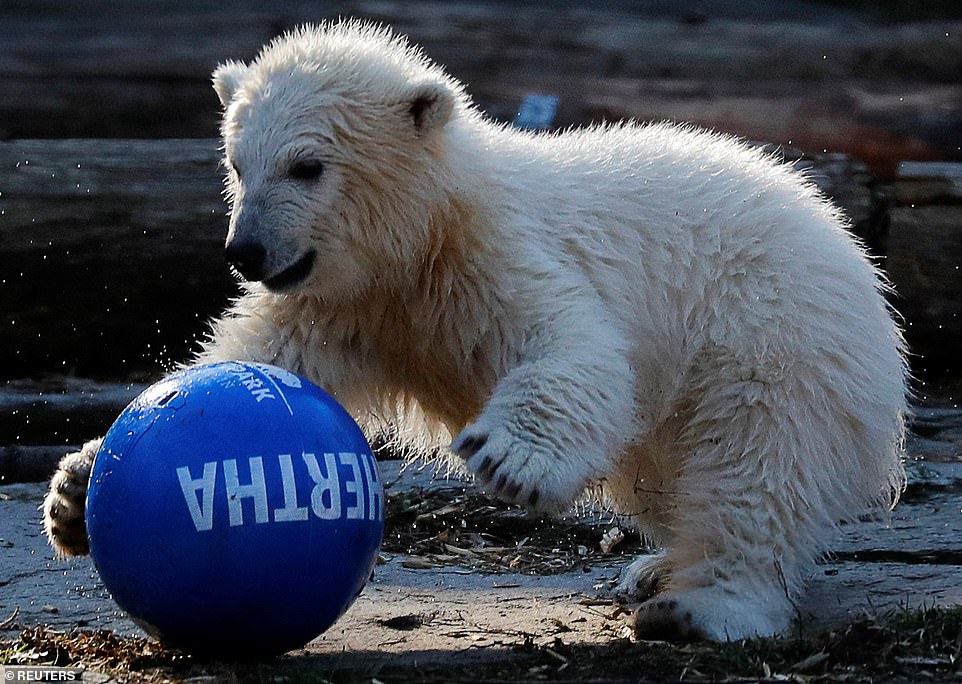 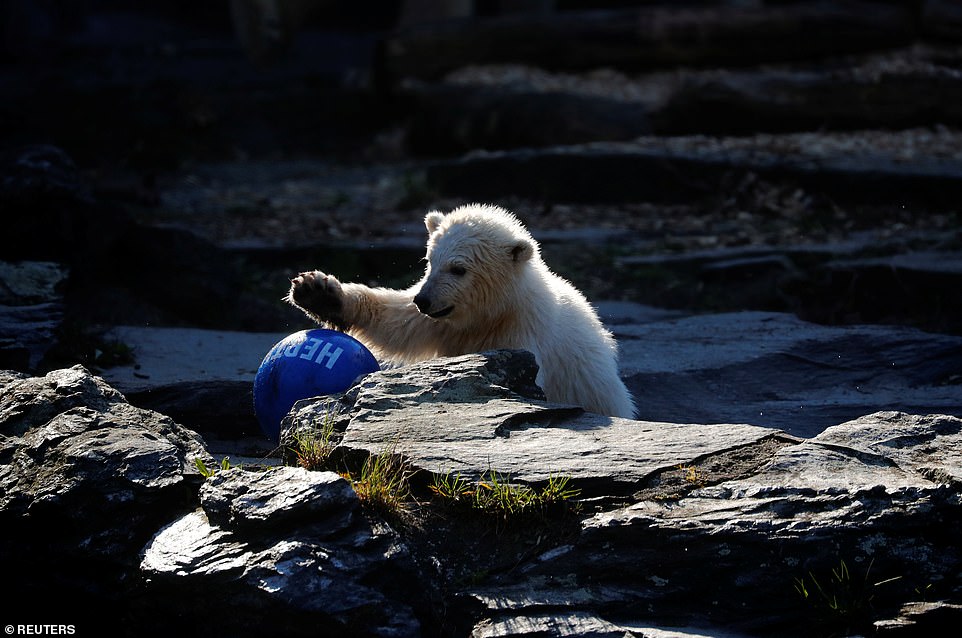 Hertha was born in December, but keepers held off naming her because it is common for polar bears to die within in the first three months. When it became obvious she would survive, they gave her the name 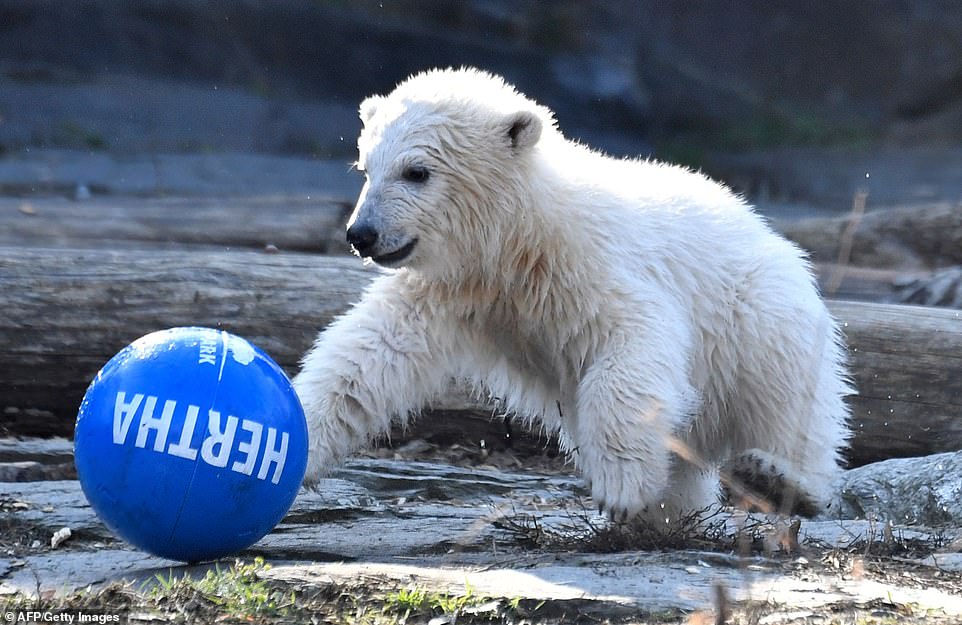 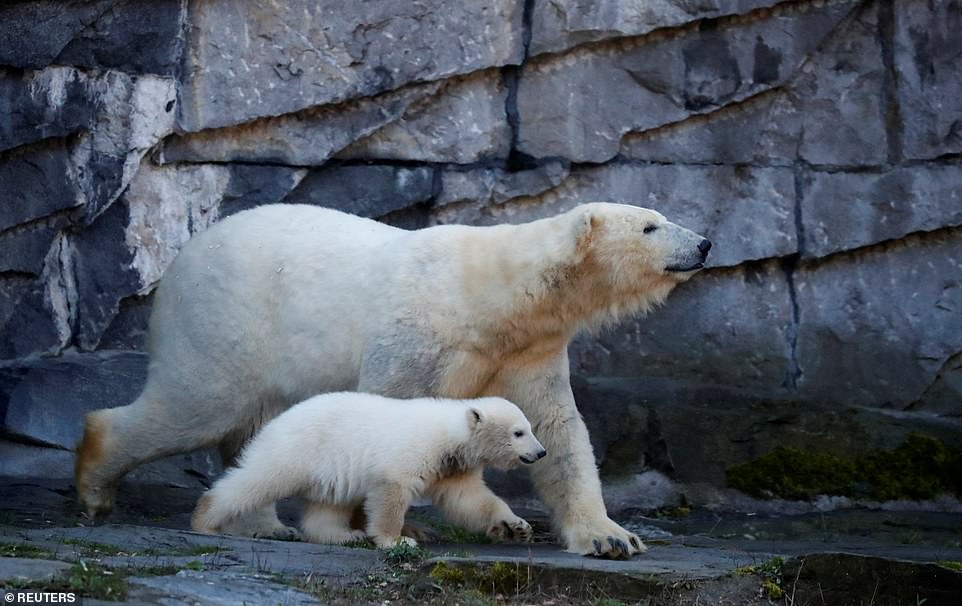 Mother Tonja has given birth to three cubs in the last two years, all of whom have died in the first few months of life, but Hertha managed to pull through

After the eagerly anticipated announcement the football club quickly unveiled posters showing off Hertha under the slogan: ‘In Berlin you can be everything. Even a polar bear called Hertha’.

The club also posted a video of its grizzly bear mascot ‘Herthinho’ travelling from its Olympic Stadium ground in west Berlin to Tierpark in the east to meet the latest arrival.

Hertha was greeted by a phalanx of cameras last month when she stepped out in public, frolicking with her mother Tonja in Tierpark’s polar bear enclosure at a media photo-op.

The mortality of polar bears tends to be very high in the first weeks and Tonja lost three of her cubs in less than two years. 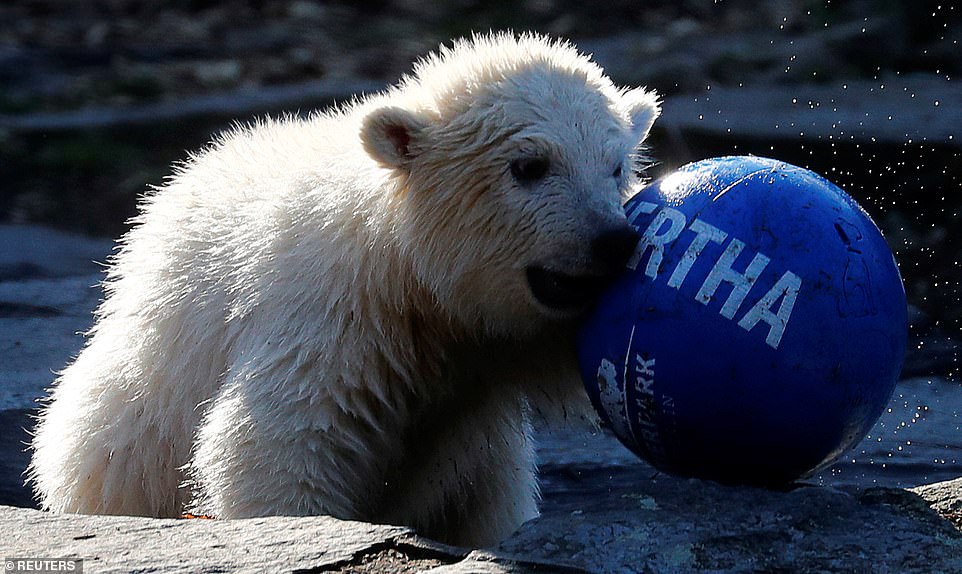 The young cub will now become one of the city’s star attractions, taking over from Knut – another polar bear who was born in 2006 but passed away suddenly in 2011 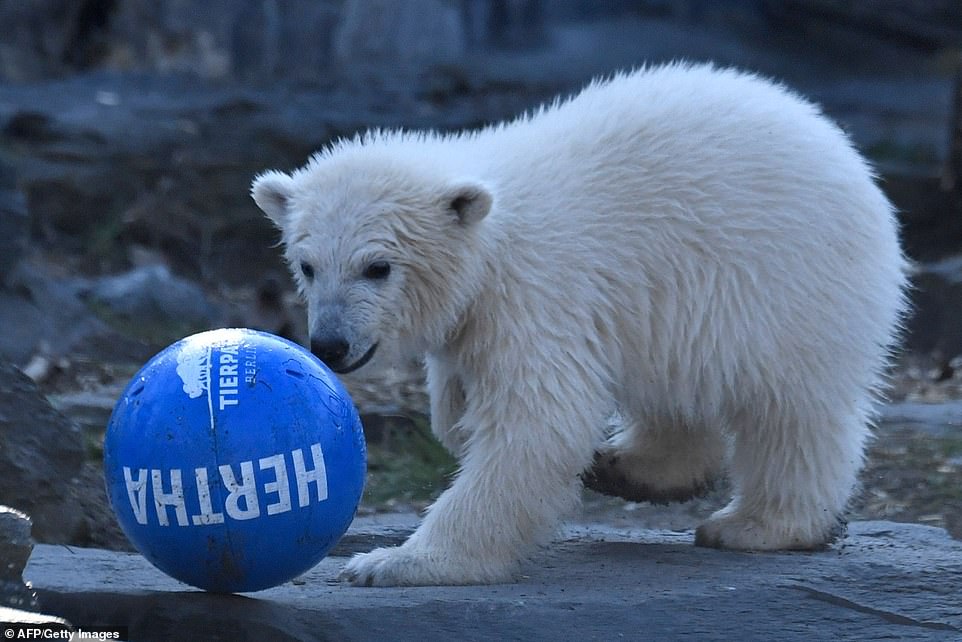 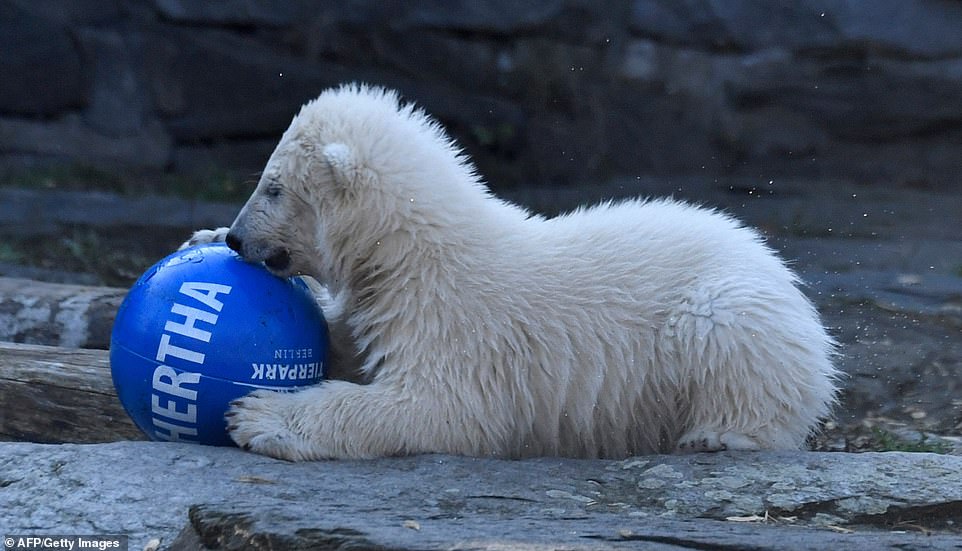 Hertha seemed to enjoy the gift so much that she had soon tired herself out by running around after it. At one point mother Tonja had to fetch it from the deep end of the moat after she knocked it down there 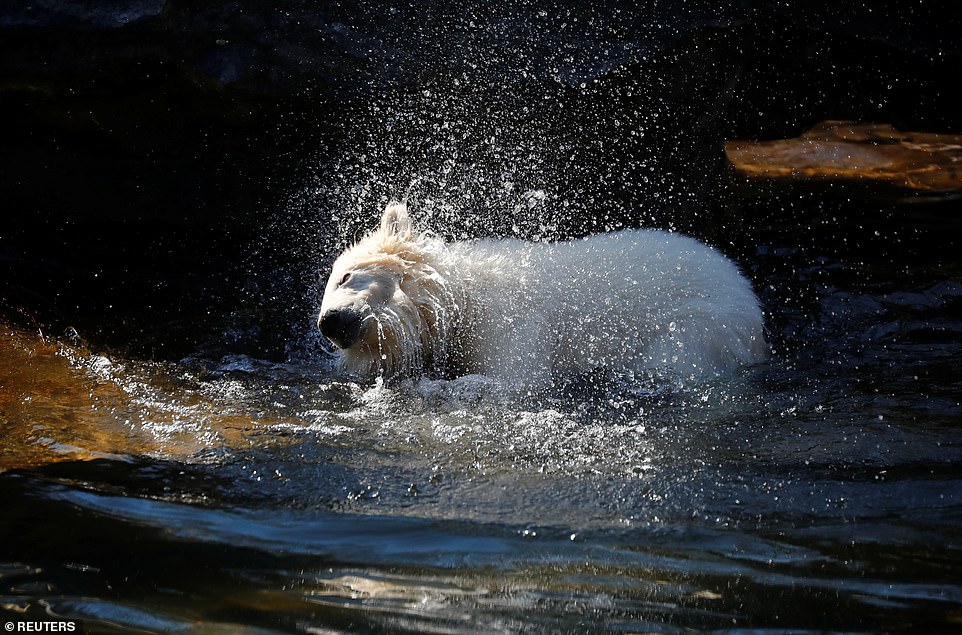 To the great relief of her keepers, Hertha has made it through the crucial first three months when a captive cub’s chances of survival hang in the balance.

To celebrate, Hertha has now been named, but her father Wolodja, who has been moved to a zoo in the Netherlands, will miss the celebrations.

Every birth of a polar bear is greeted with delight in Berlin since Knut became an overnight celebrity, as visitors flocked to glimpse the white cub, born in 2006.

Berliners took Knut to their hearts after he was abandoned by his mother and raised by Thomas Doerflein, a zoo employee who also became a minor celebrity.

A European Union breeding plan is attempting to boost numbers of the bear, whose population in the wild is estimated at around 26,000. 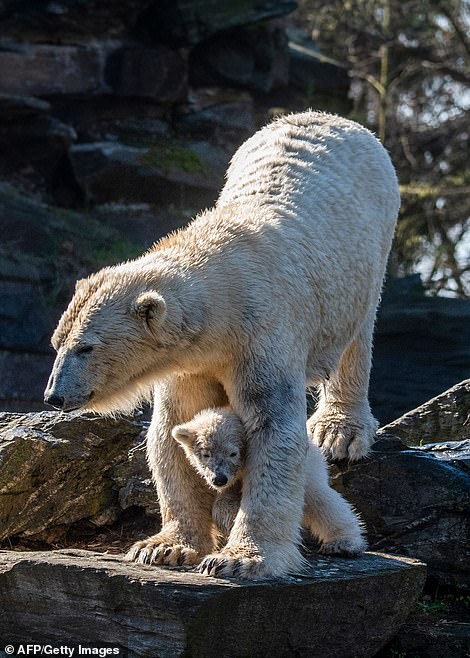 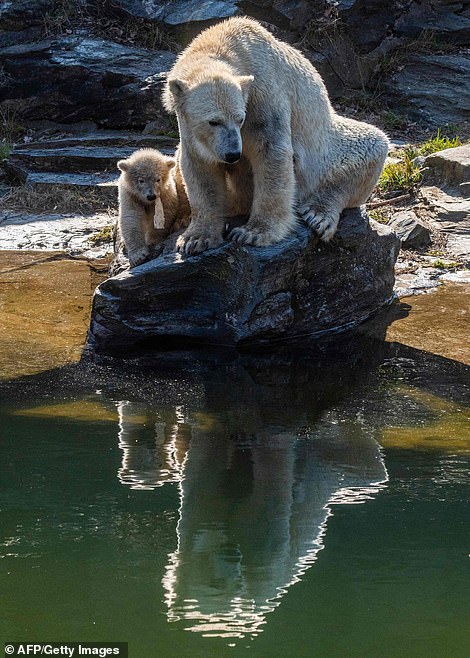 Mother Tonja has lost her last three cubs in the first few months of life, but seemed to be taking to motherhood like an old pro as she walked around her enclosure with Hertha 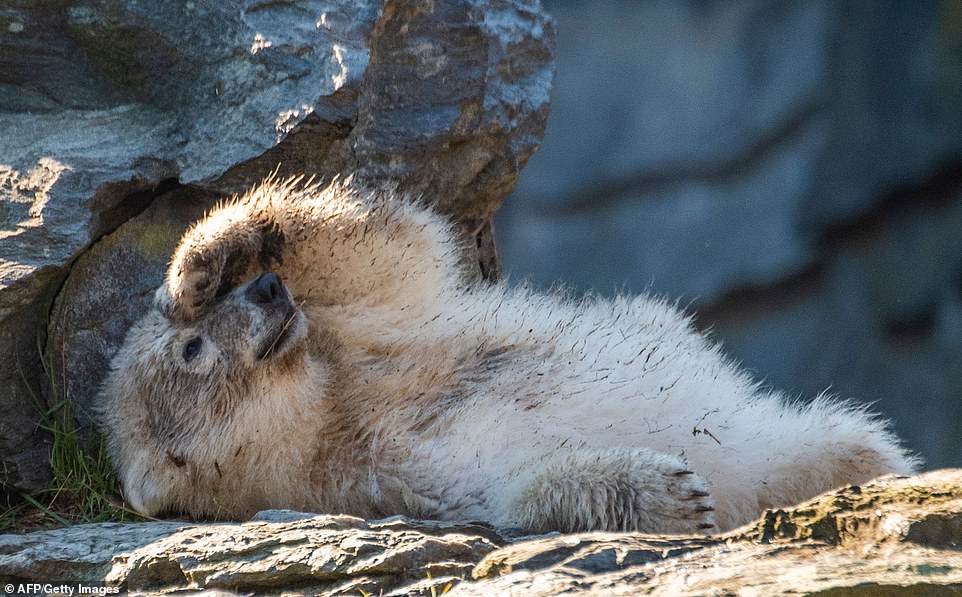 The young bear went for a lie-down after playing with her ball, enjoying some of the early spring sunshine in Berlin 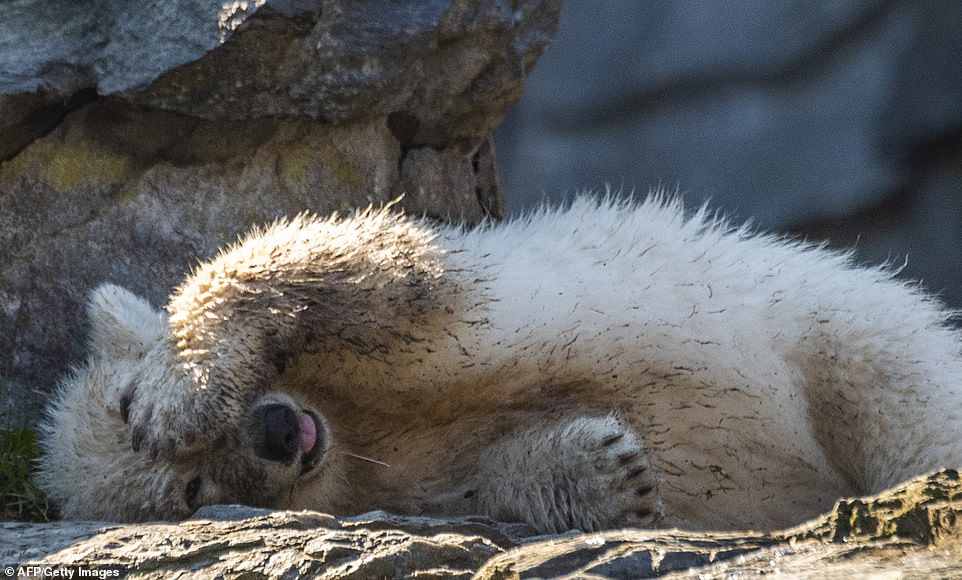 Hertha pulls a cheeky face for the cameras after showing off her football skills at the Tierpark zoo, in Berlin 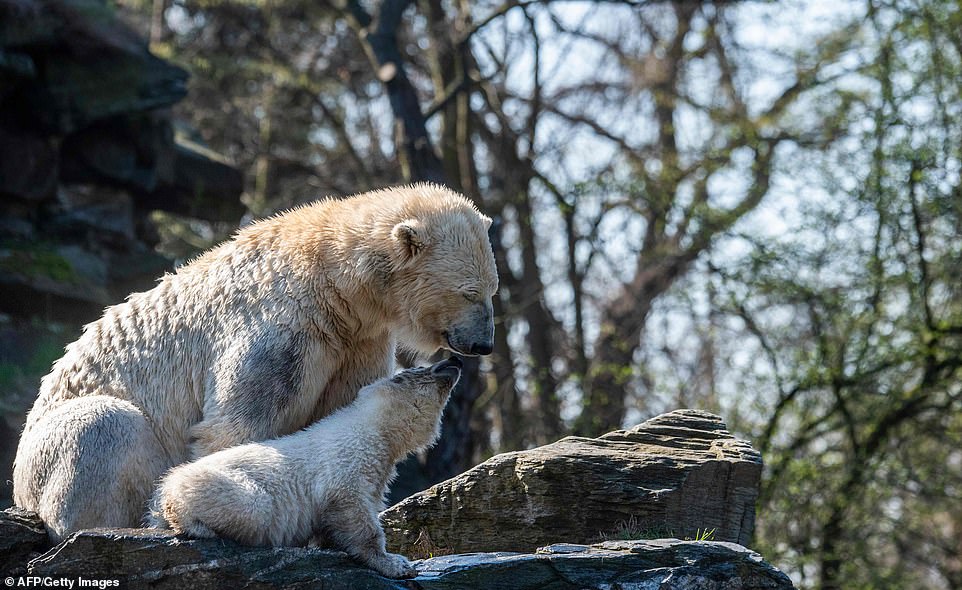 Chris Evans slams Kanye West's call for 13th Amendment to be abolished
Brutal first winter storm kills at least eight across the US
Nearly 500 Central American migrants have entered the US illegally within one week in AZ
Lone survivor of Florida bank massacre ran out a back door to escape
Mother tells how she bravely ran away from incestuous polygamous cult at 17
Utah drunk driver, 19, said he hit girl, 11, 'because she was white,' told her 'we all die sometime'
Deutsche Bank prepares for layoffs in New York City
Second 'unknown origin' case of coronavirus is confirmed in California