A racehorse died in the arms of his trainer after a vehicle towing him was involved in a 100mph head-on crash which ripped the side of his horsebox off.

Six-time winner Rockwood was being transported back along the A15 near Lincoln after a race when the accident happened.

Driver Graeme Scantlebury claims a van going the opposite way was veering towards them but he said he couldn’t avoid the collision and the side of their horsebox was ripped off. 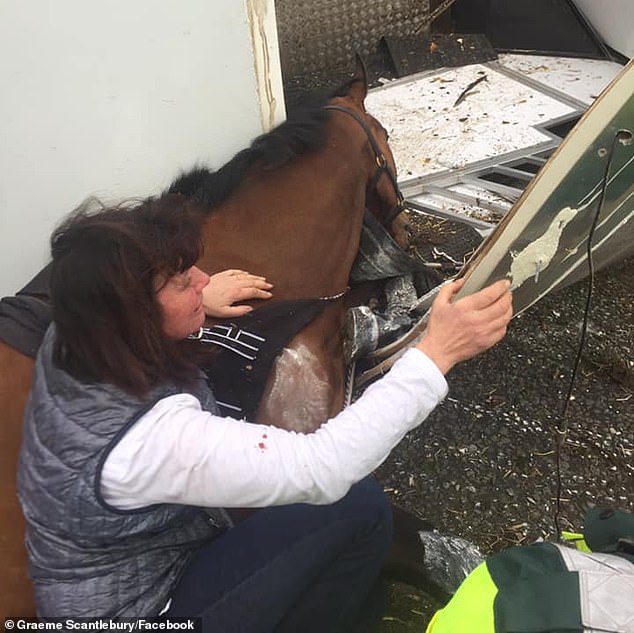 Rockwood the racehorse died after a 100mph head-on crash with a van that allegedly veered off course and ripped off the side of Rockwood’s horsebox like the ‘top of a sardine can’. Pictured is inconsolable trainer Karen Mclintock holding ‘Rocky’ as he died 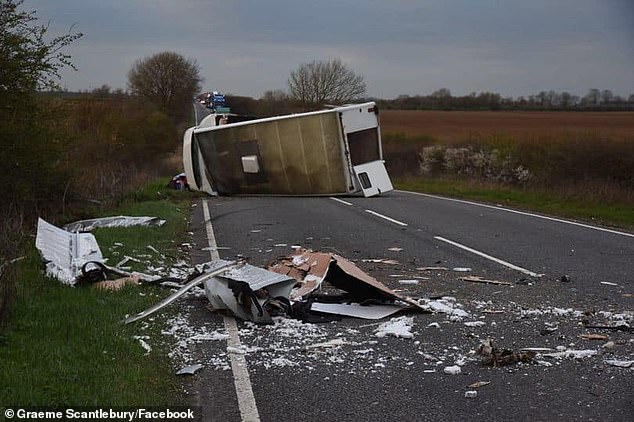 Driver Graeme Scantlebury posted a message on Facebook about the incident. He said: ‘We ran around the wagon to find poor Rocky breathing his last breaths as Karen, the most caring of trainers, became inconsolable as he died in her arms’

Both Mr Scantlebury and trainer Karen Mclintock miraculously escaped with barely a scratch but they couldn’t save Rockwood – known as Rocky.

Police are investigating the crash which happened last Wednesday – Ms Mclintock’s birthday – as they made their way back from Market Rasen racecourse.

Mr Scantlebury posted on Facebook: ‘The 27th of March was just a normal day for me, transporting horses up and down the country. I was booked to take a horse named Rockwood to Market Rasen for Karen Mclintock Racing.

‘The day started well with the horse picked up on time, loaded and a photo taken of Rocky happily eating his hay for the connections. We set off in good time and Karen informed me it was her birthday, everything was good.

‘During the three-and-a-half hour journey the conversation turned to the amount of crashes we see and the near misses we have had on these long journeys.

‘I commented that by the law of averages it is bound to happen to me someday, not expecting that six hours later, it would.’

The post continues to say: ‘We arrived at the races, Rocky ran well in his first hurdle race, the owners were happy and Karen celebrated her birthday with a glass of wine along side the owners.

‘We left the race course with Rocky loaded fine. He started tucking into his hay like a little super star and we set off.

‘As a legal horse transporter you do everything you can to minimise the risks, you have all the licences required, insurance, vehicle inspected by the FTA for DEFRA, however you cannot legislate for the other drivers on the road.’

Mr Scantlebury then spoke of the moments leading up to the horrific head-on collision.

He said: ‘We entered the A15, a road notorious for crashes and fatalities, we were driving along at 50mph as Karen was on her phone thanking everyone for their birthday wishes when she hears me shout “f**k”.

‘The reason being that there was a van travelling in the opposite direction veering onto my side of the road.

‘I made the split second decision to put my horses box into the ditch.

‘I had all four wheels on the grass. Sadly, this was not good enough and the van still hit us at probable a combined speed of over 100mph.

‘The impact was so hard it flipped my 2500kg wagon carrying a 450kg horse onto its side, completely ripping the side off like the top of a sardine can. 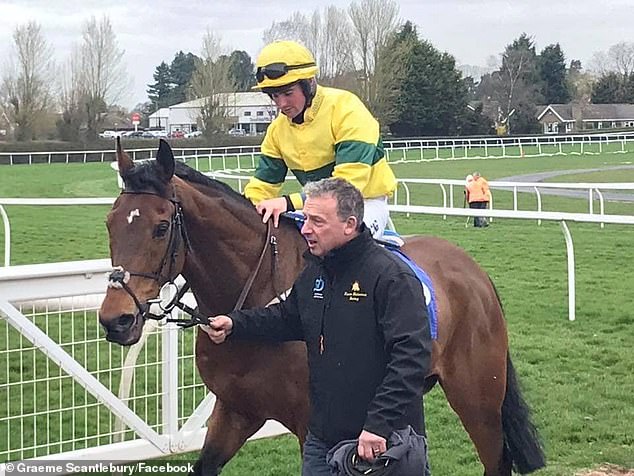 Police are still investigating the cause of the crash, which happened on Ms Mclinktock’s birthday last week, and killed Rocky (pictured) 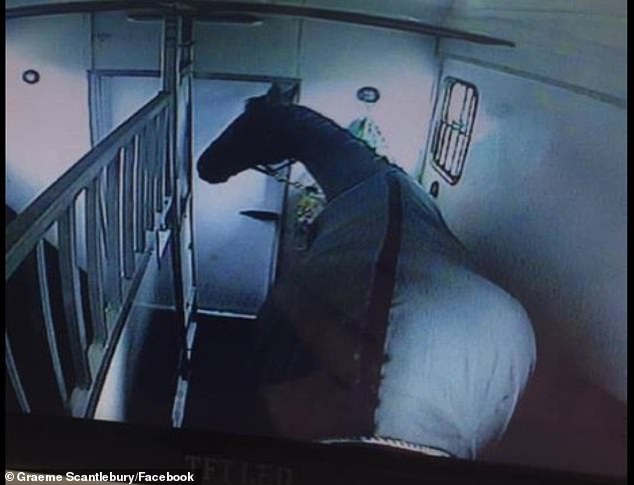 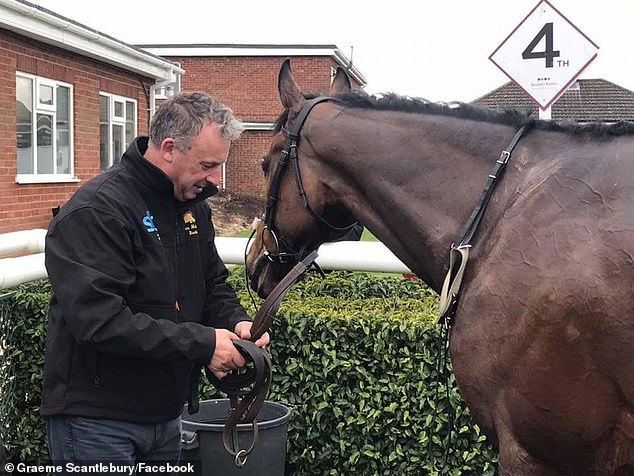 ‘You can imagine my relief when I realised I was still alive and to hear Karen say she was okay.

‘The panic then set in as we needed to get out for Rocky, with the help of some very kind fellow drivers we got out with barely a scratch on us.

‘We ran around the wagon to find poor Rocky breathing his last breaths as Karen, the most caring of trainers, became inconsolable as he died in her arms.

‘He was a kind horse that only ever wanted to please.

Mr Scantlebury has spoken of the heartache he has felt since Rocky died in the crash.

He said: ‘When I said earlier we escaped (driver of the van included) with minimal physical injuries, the mental side has been surprisingly difficult to comprehend.

‘I have spent the last two days bursting into tears for no apparent reason.

‘I would also like to thank everyone who stopped and helped that day and the witnesses who gave evidence to the police.’

Lincolnshire Police are investigating the cause of the crash. 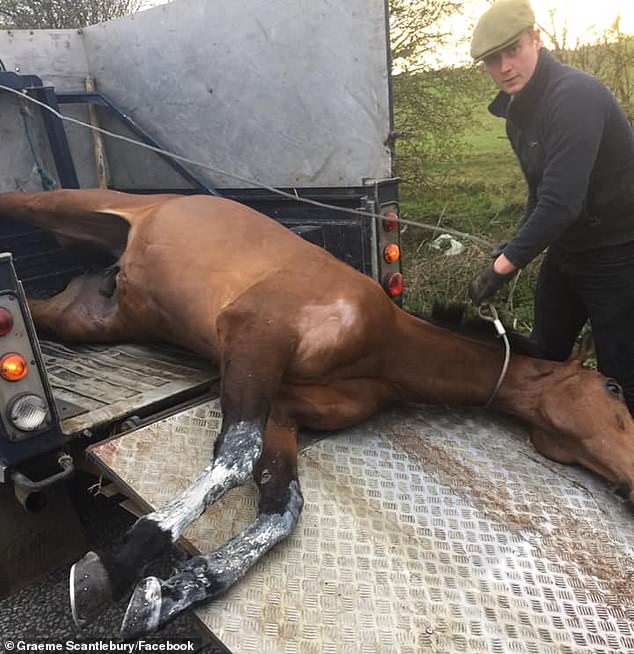 While Mr Scantlebury and Ms Mclinktock managed to escape the head-on crash without any serious injury, Rocky was already taking his last breaths when the pair got out of the vehicle. Mr Scantlebury wrote on Facebook: ‘The impact was so hard it flipped my 2500kg wagon carrying a 450kg horse onto its side, completely ripping the side off like the top of a sardine can’. Pictured is Rocky after the crash 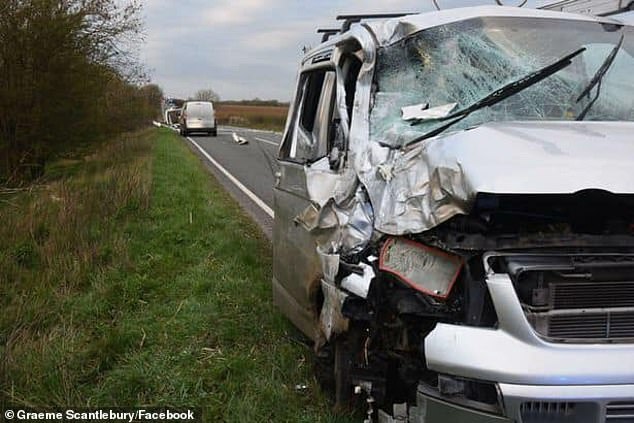 Lincolnshire Police are investigating the cause of the crash which happened on the A15 near Lincoln. Pictured is the scene after the crash

British Fuel customary variable tariff prospects face...
British woman who bought baby twins over the internet for £8,200 pleads with them to get in touch
Bungling lemming plotters are gripped by chaotic infighting
Drug drivers on Britain's roads are up by half, with 37 motorists testing positive
'Private security firms handcuffing thugs is a criminal betrayal of 200 years of policing'
Queen is joined by Prince Charles and Princess Anne as she attends a Sunday service in Balmoral
Men who are on statins may have a reduced risk of developing lethal prostate cancer
Extinction Rebellion protesters around the world slam Scott Morrison over Australia's bushfires