Saturday Night Live poked fun at the Jussie Smollett case this weekend after all charges against the Empire star were dropped.

The evening’s host Sandra Oh was joined by Chris Redd, playing Smollett, in a red MAGA hat as he tried to explain his lateness to his bosses on the show.

After turning up late to a meeting discussing his future on Empire Redd’s Smollett says: ‘Guys, you’re not going to believe what just happened to me.

‘I know what you’re thinking but it’s not that. I got attacked again.’

In the new sketch executives, played by Kate McKinnon, Ego Nwodim and Mickey Day, reply: ‘That’s exactly what we were thinking, Jussie.’

Redd’s Smollett replies: ‘Oh, good, so you believe me.’

He goes onto claim he is ‘still the gay Tupac’ who was able to fight off his attackers because he is ‘the gay Mike Tyson’.

At a sold-out concert in West Hollywood, California, in February the real Smollett announced that he fought back against his attackers, calling himself ‘the gay Tupac’. 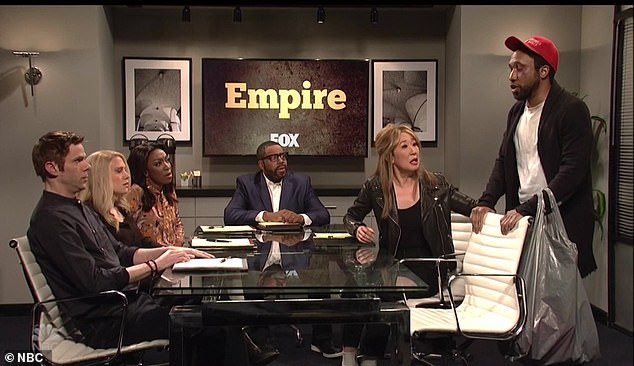 Saturday Night Live poked fun at the Jussie Smollett case this weekend with Chris Redd reprising his role at the actor, far right 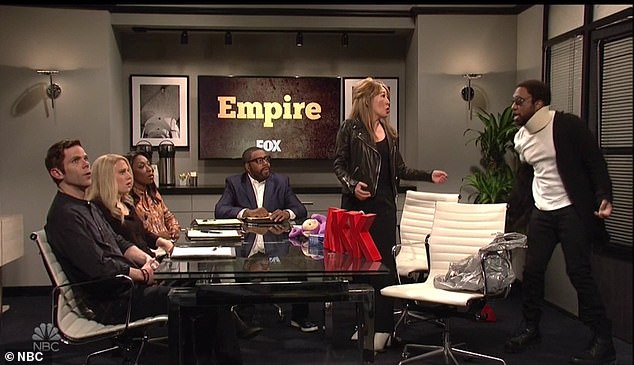 When Oh’s manager fires her client he leaves the office before returning, this time wearing a neck brace and sunglasses

Playing his manager Oh replies: ‘Nobody know what’s that means. You know why this story is hard to believe, right?’

Redd’s Smollett then takes out a bag of clues he says was left by his attacker containing Crest White Strips, a Teletubby, and the letters KKK.

He says: ‘The killer left me a bunch of clues.’

‘Hang on, there’s more stuff. Oh, a receipt, I need that. Car keys, definitely need those. Oh, a teletubby. And it’s the gay one.’

When the show producers suggest calling the police over his attack, character Jussie replies: ‘No, no, no, no, they said I can never call again. That’s part of the deal.’ 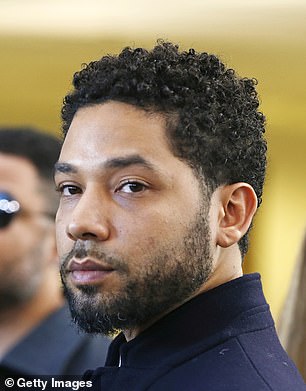 And when told he is about to be fired he goes onto claim: ‘What? You can’t fire me. I made this show, man! I aim the gay Lee Daniels.’

When Oh’s manager also fires her client he leaves the office before returning, this time wearing a neck brace and sunglasses.

He says: ‘You’re not going to believe what happened to me this time.’

Soon after Smollett’s charges were dropped on Tuesday morning, Fox issued a statement to say it was ‘gratified’ by the outcome.

He was excluded from the final two episodes of the show’s current season which were filmed after his arrest.

Meanwhile, the very prosecutors who dropped the case have spoken out to say they believe Smollett, 36, is guilty and the city’s mayor has billed him for $130,000 – the amount that was spent on police overtime investigating the January 29 attack. 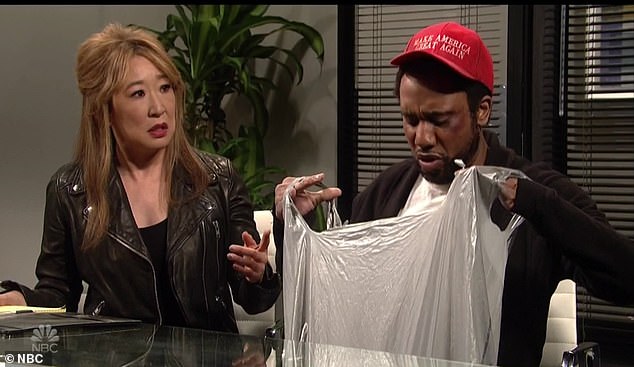 Redd’s Smollett then takes out a bag of clues he says was left by his attacker containing Crest White Strips, a Teletubby, and the letters KKK 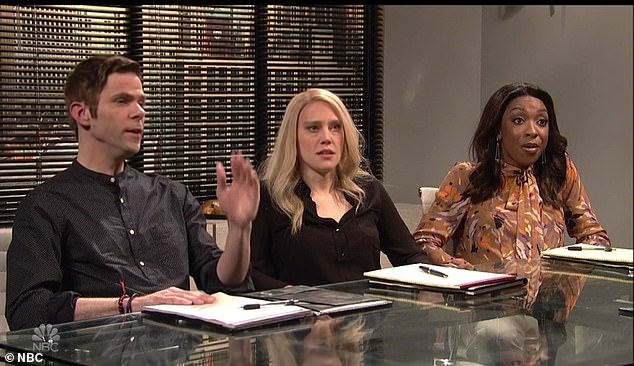 The executives, played by Kate McKinnon, Ego Nwodim and Mickey Day, fire Jussie in the sketch after he claims to have been attacked again 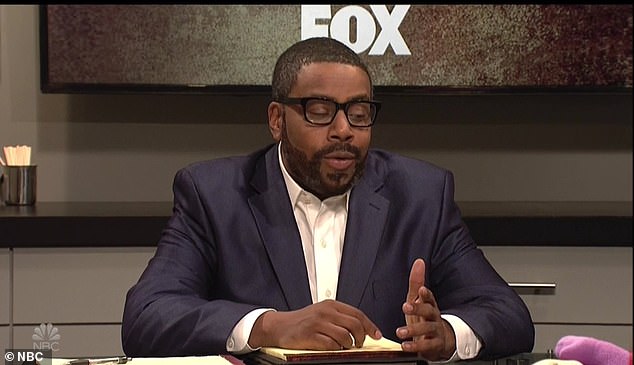 Smollett maintains that he is innocent and said in a press conference at the courthouse after the hearing: ‘I would not be my mother’s son if I was capable of one drop of what I’ve been accused.

‘I would not bring my family, our lives or the movement through a fire like this. I just wouldn’t.’

On Thursday morning, Smollett’s lawyer Tina Glandian went on Good Morning America and suggested that the reason he told police his attackers were white was because they might have been wearing make-up.