A Brooklyn bodega owner took matters into his own hands after a mob attempted to  steal a teenager’s moped right  from under him in broad daylight.

Surveillance video captured the frenetic attack which showed the unidentified 17-year-old riding his moped along the sidewalk when all of a sudden from out of nowhere he was confronted by five youths.

One of the men hit the teen across the face with a metal pipe causing him to jump off the moped and run inside the store. One of the assailants then hopped on the moped and speeds off. The attack left the victim with a laceration on his head. 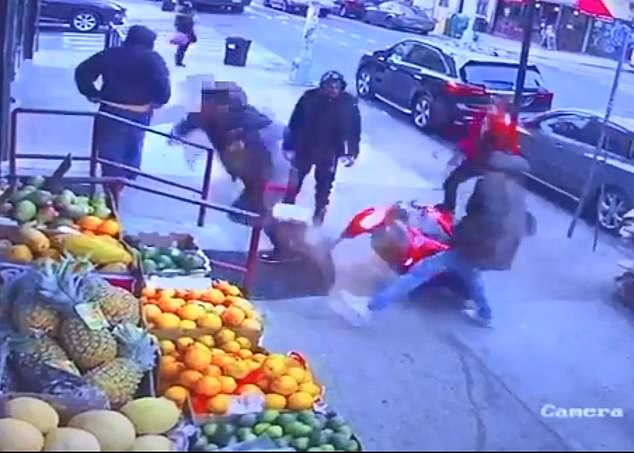 Police said a group of five men threatened a 17-year-old at knifepoint as he sat on his gas-powered moped. The teen can be seen scrambling inside a nearby store

The brave store owner, Vincent Millan, came out to see what all the commotion was about and holding a bike seat in his hand threatened the teens while other shop workers and customers ran to the door in order to prevent the mob from getting inside the store.

The attackers furiously kicked and smashed at the front entrance, but it was no use.

‘I figured the door isn’t going to hold for much longer so I came outside and said, ‘What the f*** are you guys doing?’ Millan told The Daily News. ‘And right away, they started circling me. I had my bike seat in my hands. They’re breaking bats over my head, my face, hitting me in my face with I don’t know how many objects.’

Millan was so enraged by what was happening he even smashed the windshield of one of the one suspect’s car, while he knocked another down on the sidewalk during a scuffle. 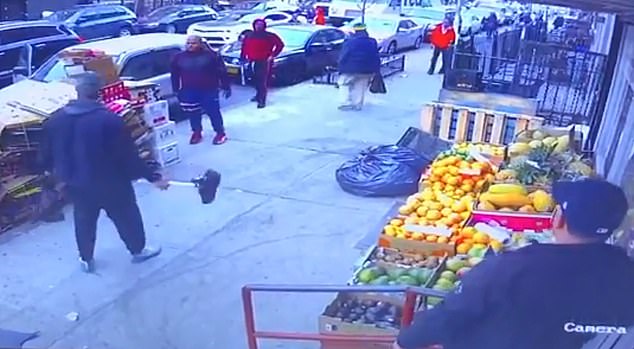 A brave store owner, Vincent Millan, came out to challenge the mob and used a bike seat to try and ward them off despite being outnumbered 4-1 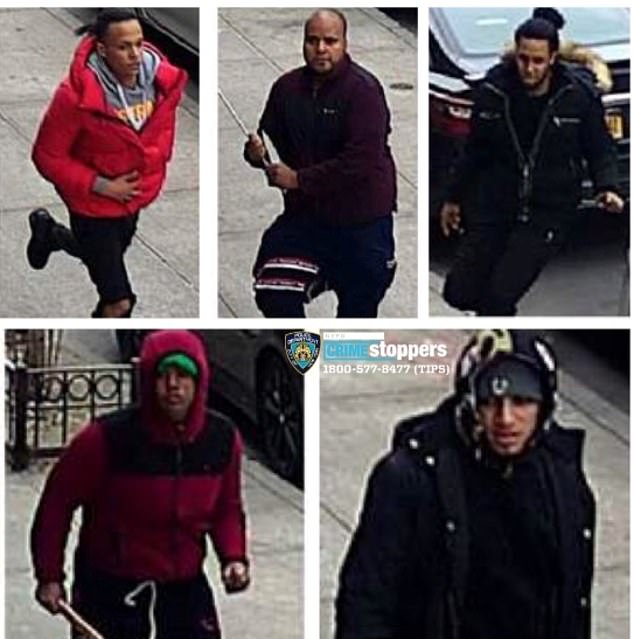 Despite being outnumbered 4-1 including challenging one man wielding a knife, Millan was determined to prevent any harm from coming to the teen.

‘I had to stop these guys from dragging this kid out,’ he explained to the  ‘How could I live with myself if I just let them?’

He told the paper that he thought about an eerily similar attack in the Bronx last June that saw Lesandro (Junior) Guzman-Feliz’s murder as he tried to escape from a gang before being stabbed to death.

A video of the brutal killing showed Junior being pulled the bodega and being hacked and slashed.

‘That flashed in my head when it happened,’ Millan told the News. ‘I said, ‘Nah, you’re not coming in here to do what you did up in the Bronx.” 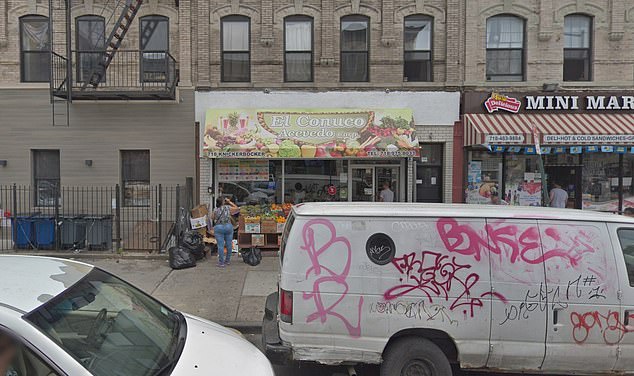 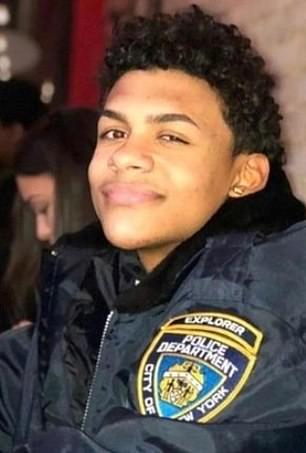 The Brooklyn attack brought back memories of a similar killing in the Bronx last June of Lesandro (Junior) Guzman-Feliz, 15, who was murdered as he tried to escape from a gang before being stabbed to death

Other workers at the store also thought exactly the same. Jones Garcia, 20, said he had a flashback to the Bronx execution of Junior.

‘The first moment the teen came into the store, that’s when it came into my mind — it’s like what happened in the Bronx,’ said Garcia. ‘If he didn’t run into the store he would have been really injured. Or maybe dead.’

‘When I saw the knife and stuff and the way they were trying to get in the store, I thought, ‘This is something,’ she recalled. ‘It’s not just the stealing the bike. It was the same thing that happened to Junior.’

A 16-year-old boy who sped off on the moped was arrested 15 minutes later after slamming into a car. He was charged with assault, possession of stolen property, possession of marijuana and driving the wrong way.

A second suspect, 26-year-old Ramon Garcia-Disla of Brooklyn, was caught and charged with robbery, gang assault and assault.

Hero firefighter and one other man protect girls, kids from gunfire
Mom says her son's teacher gave him a ‘Dumb and Dumber’ haircut for violating school's dress code
Woman claims a vibrator cured her depression
Piers Morgan makes pitch to replace 'embarrassing' Theresa May as next PM
Father who raped his son for three years and committed sex crimes will serve just TWO years in jail
Bill Barr says Left is 'sabotaging' the President by waging 'scorched earth war of resistance'
Arizona father, 33, beats his four-year-old son to death with a GUITAR
Three officers shot and wounded in Texas after gunman opens fire and barricades himself in a home