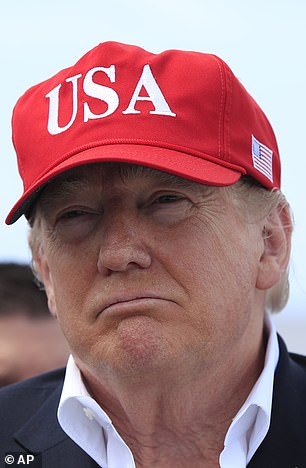 Donald Trump, (pictured), has announced that he is cutting financial assistance to the Northern Triangle countries of El Salvador, Honduras and Guatemala

has announced that he is cutting financial assistance to the Northern Triangle countries of El Salvador, Honduras and Guatemala.

Trump hinted at the cuts on Friday, as a Mexican minister claimed that the ‘mother of all caravans’ with more than 20,000 people was being organized by Honduras.

reported Trump as saying: ‘I’ve ended payments to Guatemala, to Honduras, and to El Salvador. No money goes there anymore.

Trump said the funds totaled $500 million, but it wasn’t clear if that figure was accurate.

The State Department announced in December that the U.S. would mobilize $5.8 billion in public and private american investment to the three countries.

But Trump claimed those financial aid programs would end saying: ‘We’re not paying them anymore because they haven’t done a thing for us.’ Most migrants from the three countries come to the U.S.

For years the Government here has worked with them to help their political environments and economies and end violence so that migrants wouldn’t leave. 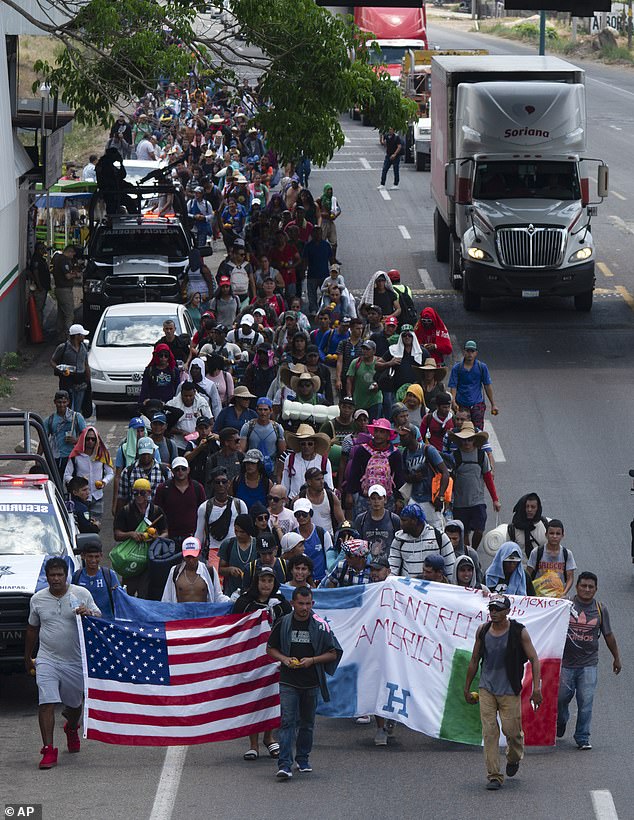 A caravan of about 2,500 Central Americans and Cubans, (pictured),  is currently making its way through Mexico’s southern state of Chiapas. The group was pictured in Tapachula on in Mexico on Thursday

A State Department spokesperson told ABC News: ‘At the Secretary’s instruction, we are carrying out the President’s direction and ending FY [fiscal year] 2017 and FY 2018 foreign assistance programs for the Northern Triangle.’

But U.S. Secretary of State Mike Pompeo testified before the House of Representatives on Wednesday about the administration’s efforts.

He claimed the told him to use U.S. funding to ‘develop a set of programs that reward effective outcomes, that reward good leadership, that get us to a place where we actually achieve the outcomes.’

Meanwhile the government of Honduras said on Friday it rejected comments by a Mexican minister that the “mother of all caravans,” with more than 20,000 people, was being organized in the Central American nation.

Mexican Interior Minister Olga Sanchez Cordero told local press earlier this week that the government was aware that ‘a new caravan is being formed in Honduras that they call the mother of all caravans. 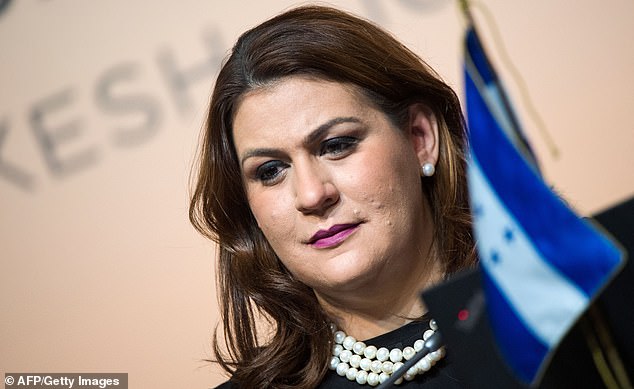 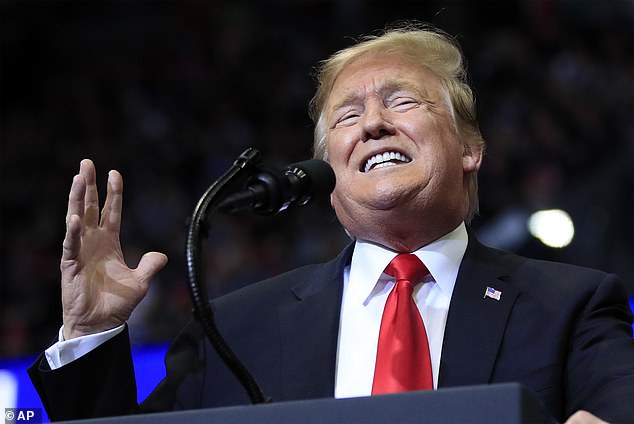 Trump threatened on Friday to close the U.S. border with Mexico next week, potentially disrupting millions of legal border crossings and billions of dollars in trade

‘They are thinking that it can be more than 20,000 people.’ The Mexican interior ministry did not immediately respond to a request for comment.

Trump threatened on Friday to close the U.S. border with Mexico next week, potentially disrupting millions of legal border crossings and billions of dollars in trade, if Mexico does not stop migrants from reaching the United States.

‘It could mean all trade’ with Mexico, Trump said when questioned Friday by reporters in Florida. ‘We will close it for a long time.’

Trump has been promising for more than two years to build a long, impenetrable wall along the border to stop illegal immigration, though Congress has been reluctant to provide the money he needs. 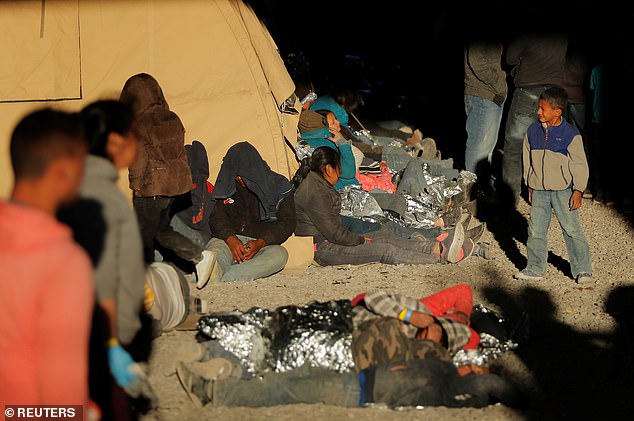 A young boy walks near other migrants lying on the ground inside an enclosure, where they are being held after crossing the border between Mexico and the United States illegally 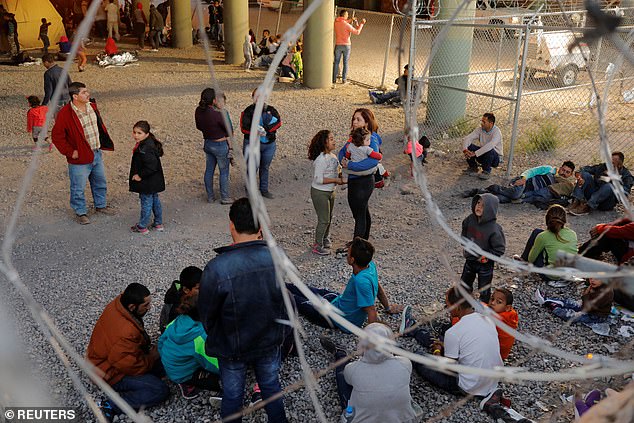 Migrants from Central America wait inside of an enclosure, where they are being held by U.S. Customs and Border Protection in El Paso, Texas on Friday

In the meantime, he has repeatedly threatened to close the border, but this time, with a new surge of migrants heading north , he gave a definite timetable.

A substantial closure could have an especially heavy impact on cross-border communities from San Diego to South Texas, as well as supermarkets that sell Mexican produce, factories that rely on imported parts, and other businesses across the U.S.

The U.S. and Mexico trade about $1.7 billion in goods daily, according to the U.S. Chamber of Commerce, which said closing the border would be ‘an unmitigated economic debacle’ that would threaten 5 million American jobs.

Trump tweeted Friday morning, ‘If Mexico doesn’t immediately stop ALL illegal immigration coming into the United States through our Southern Border, I will be CLOSING the Border, or large sections of the Border, next week.’ 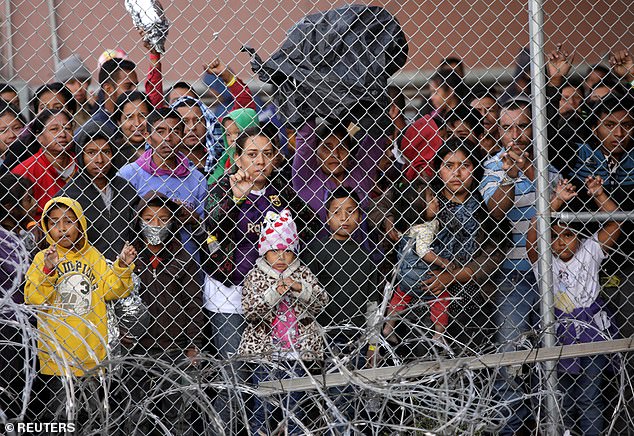 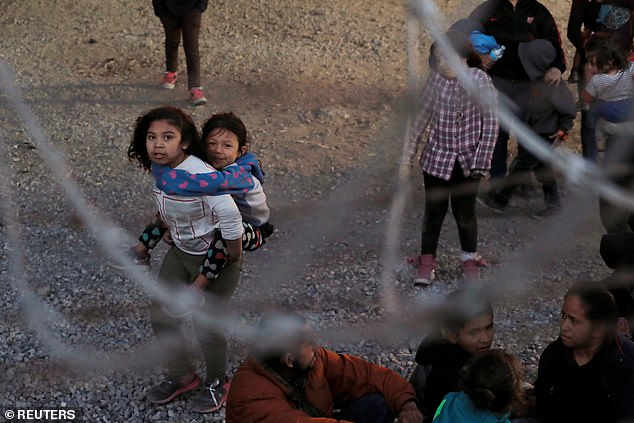 A young girl carries a child on her back inside an enclosure, where they are being held by U.S. Customs and Border Protection in El Paso on Friday

Many people who cross the border illegally ultimately request asylum under U.S. law, which does not require asylum seekers to enter at an official crossing.

Short of a widespread shutdown, Nielsen said the U.S. might close designated ports of entry to re-deploy staff to help process parents and children. Ports of entry are official crossing points that are used by residents and commercial vehicles.

“If we have to close ports to take care of all of the numbers who are coming, we will do that,” Nielsen said. “So it’s on the table, but what we’re doing is a very structured process based on operational needs.”

The White House did not immediately respond to questions about whether Trump’s possible action would apply to air travel.

Criminal networks charge thousands of dollars a person to move migrants through Mexico, increasingly in large groups toward remote sections of the border.

A caravan of about 2,500 Central Americans and Cubans is currently making its way through Mexico’s southern state of Chiapas.

The largest of last year’s caravans in Mexico contained about 7,000 people at its peak, though some estimates ran as high as 10,000 at some points.

Mexico appears to be both tiring of the caravans and eager not to anger the United States.

It has stopped granting migrants humanitarian visas at the border, and towns along the well-traveled route to Mexico City sometimes no longer allow caravans to spend the night.

Viagra may very well be a brand new miracle treatment for BLINDNESS, scientists declare
Nice white shark discovered useless with purple hue alongside Cape Cod seashore
Far-right protesters march in Germany after man killed 'by migrants'
Sea lettuce next to a discarded carrier bag reveals how easy it is to mistake rubbish for food
Pilot pleads not guilty to indecent exposure at airport
Doctors are up to 37% less likely to screen you for cancer later in the day
Georgia high school senior graduates with a perfect attendance record
Banks have made at least $10 BILLION in fees for processing paycheck protection program funds