This is the incredible moment a fleet of B-52 Stratofortress bombers returned to the UK after an exercise in Norway, bringing back memories of the US bomber trails from WWII.

The planes came to the UK in the largest US bomber deployment since the War and landed at RAF Fairford in Gloucestershire.

Six bombers, which carry nuclear weapons and precision-guided munitions, and 400 personnel arrived as a visual display of the US’s commitment to NATO amid rising tensions with Russia.

They returned to RAF Fairford after flying over Norway and stunning photos of them in flight recall similar scenes of US bombers from WWII.

Then, the B-17 Flying Fortress was employed in a bombing campaign of German targets and many planes were based at UK airfields.

B-52s have been a mainstay of the United States military for decades and are expected to remain in active service until beyond 2050. 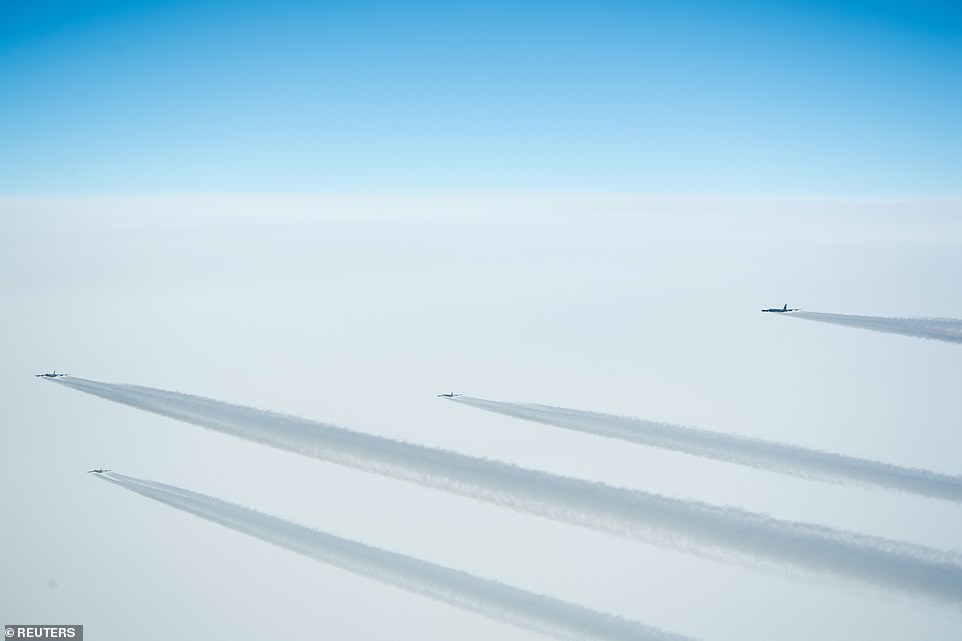 A fleet of B-52 Stratrofortress long-range bombers fly over Norway as they return to RAF Fairford. The jet-powered planes have flown in from Barksdale Air Force Base in Louisiana as part of a new deployment of the USAF Bomber Task Force in England 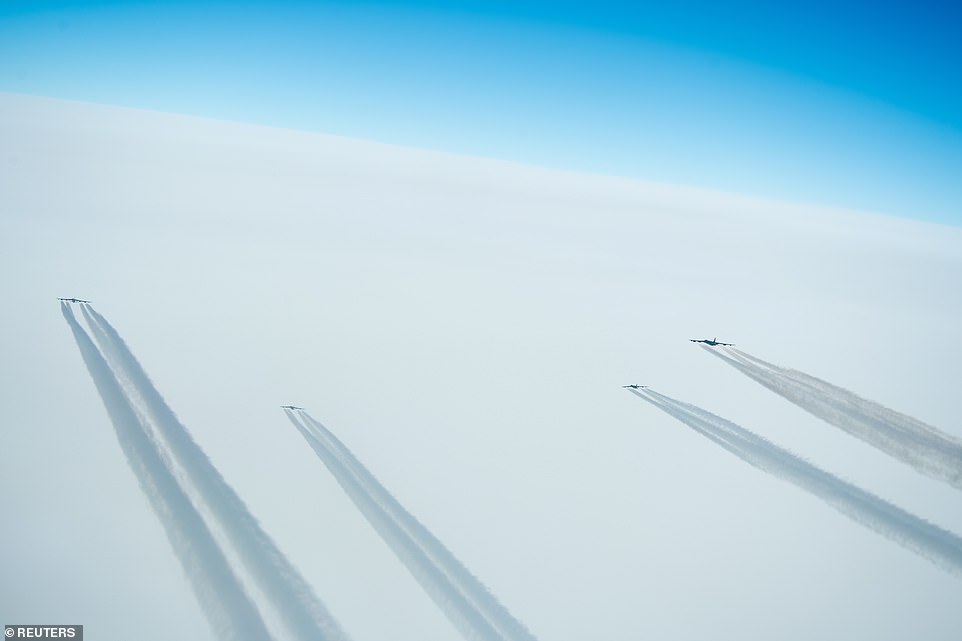 The long-range bombers carry nuclear weapons and precision-guided munitions and six of them, with 400 personnel, have come to the UK as a show of the US’s commitment to NATO. Lieutenant Colonel Mike Esposito said: ‘The significance for us is that we’re able to get in the airspace and train with our allied partners’ 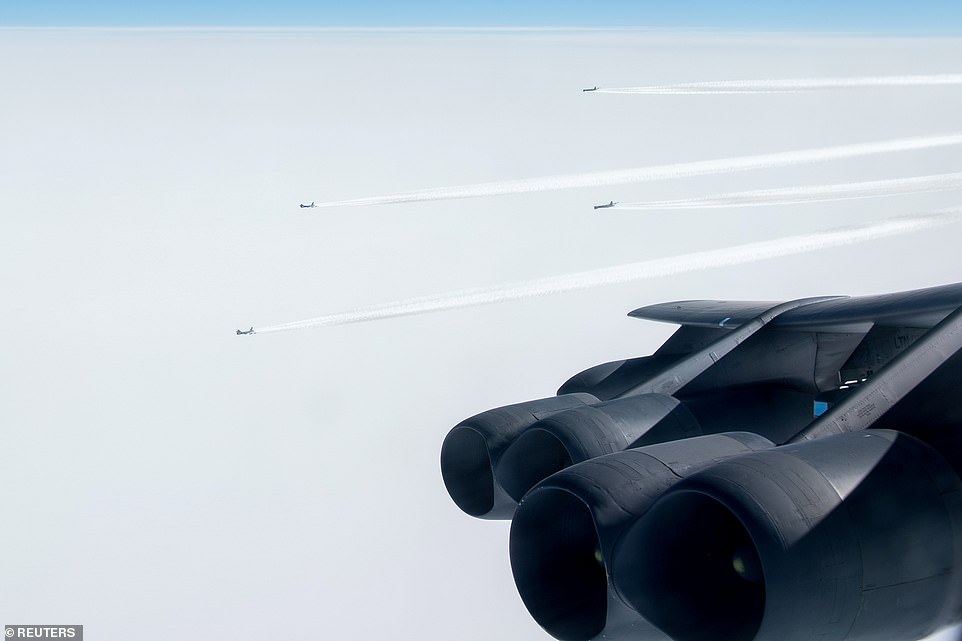 The bomber has a combat range of nearly 9,000 miles without refuelling and can carry 32,000kg of weapons. Its first flight was in 1952 and it is expected to serve into the 2050s 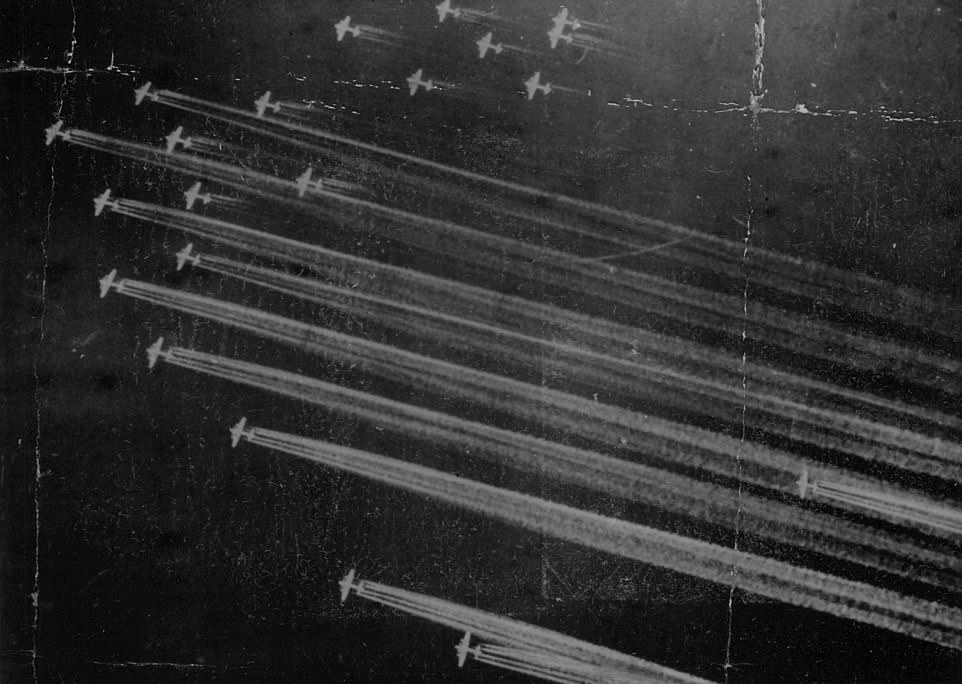 The images bring back memories of the vapour trails from the B-17 Flying Fortresses from WWII on their bombing missions to Berlin. The four-engined heavy bombers were based at airfields in southern England during their strategic bombing campaign against the Nazis 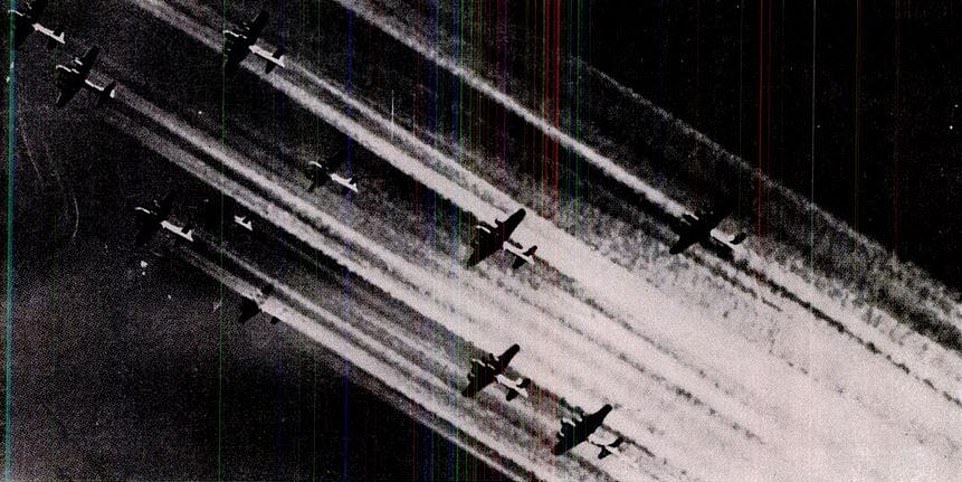 The US B-17 bombers began its war operations with the RAF in 1941 after the allies entered into an agreement to acquire 20 aircraft. The planes were primarily involved in the bombing of German military targets such as airfields, docks, warehouses and U-boat pens 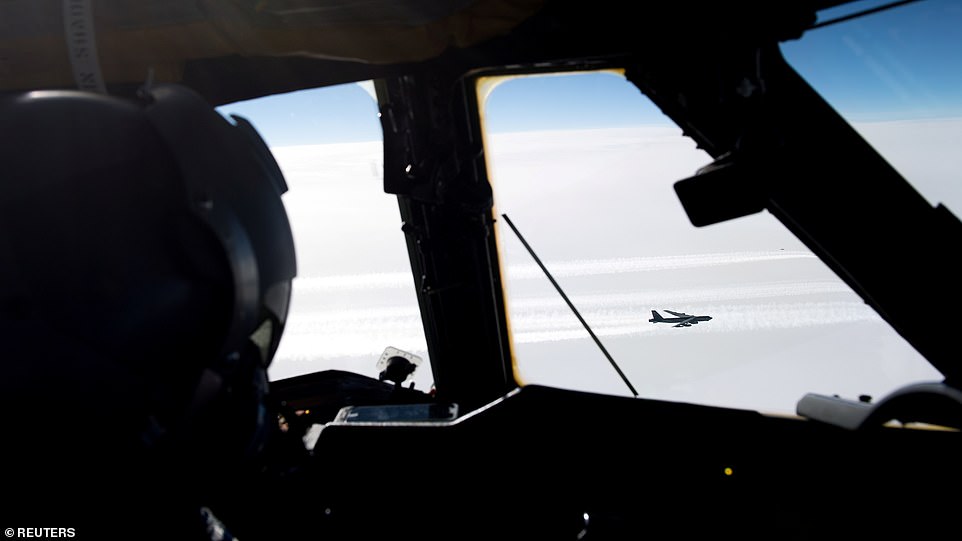 The B-52 bombers have joined the US European Command area of operations and they could be part of a deployment for flying training and ‘theatre integration’. The aircraft is capable of flying at high subsonic speeds at altitudes up to 50,000 feet 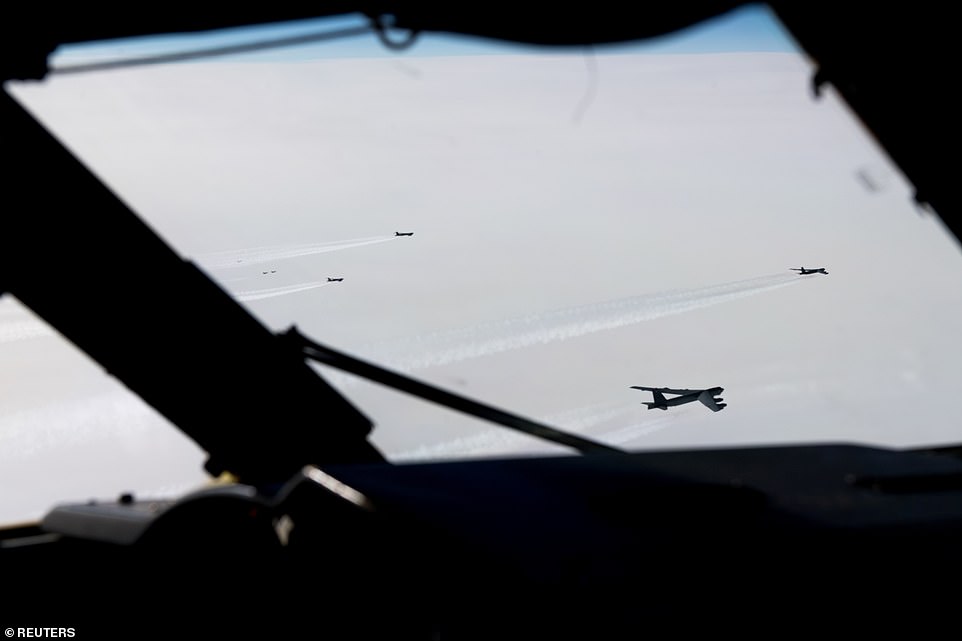 Strikes carried out by the B-52s were crucial to the success of Operation Desert Storm in 1991. The planes delivered 40 per cent of all weapons dropped by the coalition forces against Iraq. The B-52 is capable of dropping or launching gravity bombs, cluster bombs, precision guided missiles and joint direct attack munitions 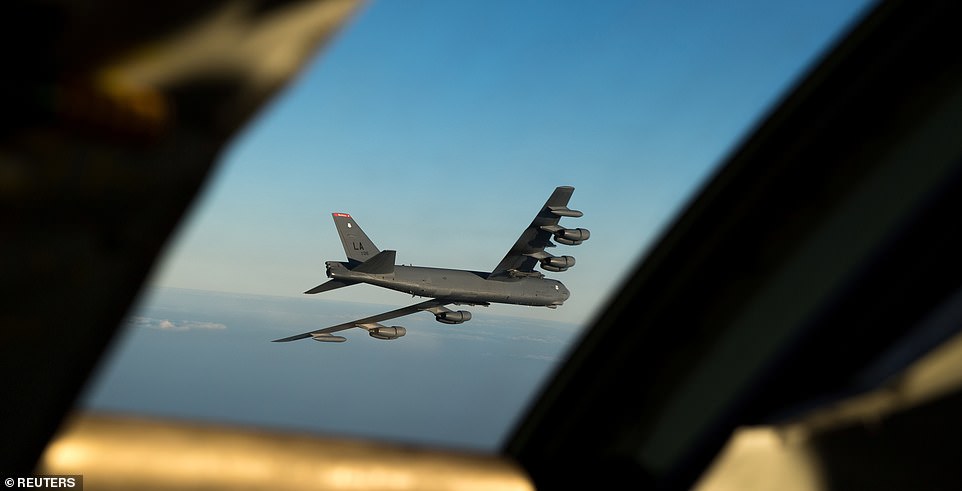 The planes, which weigh approximately 83,250 kilograms, have a top speed of 650mph. They will be operating out of RAF Fairford and could become a fixture of the Gloucestershire skies 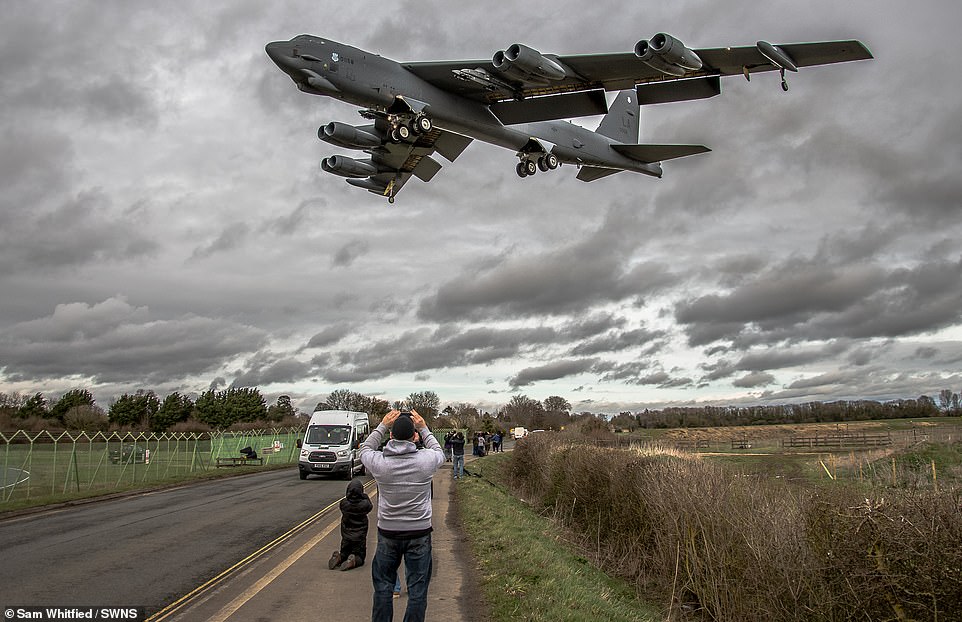 This is the incredible moment that a US Airforce B-52 Stratofortress bomber came in to land for the first time at RAF Fairford two weeks ago. The planes have since been on a show of US strength around Europe 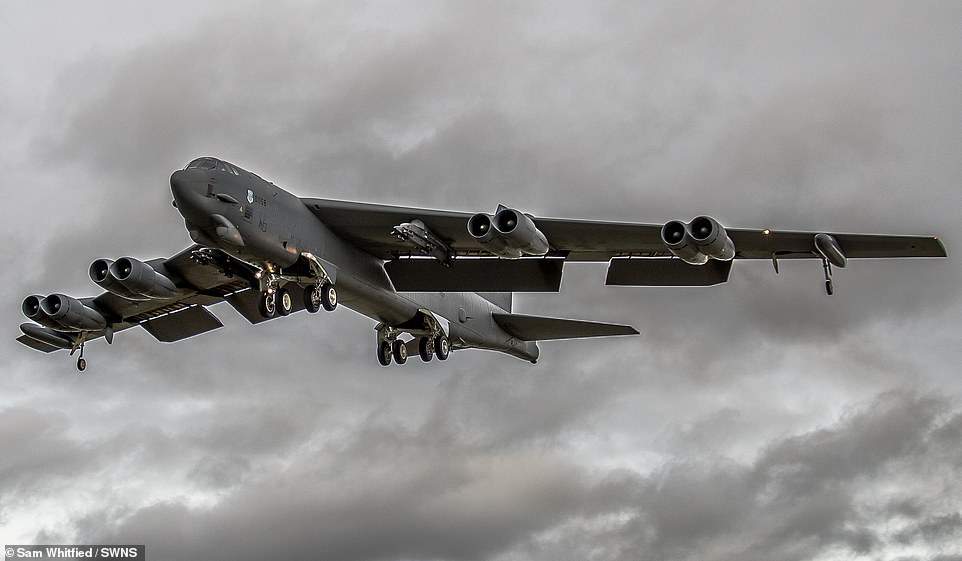 The military show of force is the largest deployment of a US single bomber platform since 2003 for Operation Iraqi Freedom. 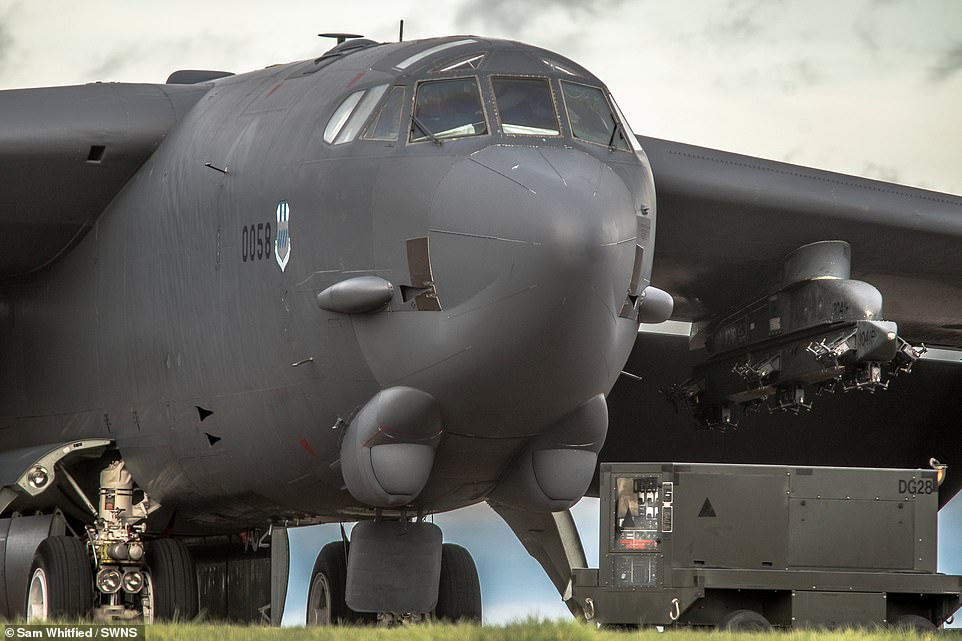 The bombers have been taking part in exercises over a huge area, from the Arctic all the way down to the Sahara desert to show the US’s commitment to NATO amid rising tensions with Russia