The fake German heiress accused of duping people out of millions of dollars in a socialite scam refused to enter court on Friday because she was unhappy with her clothes then cried in front of a judge before changing and returning.

Anna Sorokin, 28, is accused of fraud for allegedly trying to get a $22 million loan to open a private arts club by dishonestly claiming she had a $67 million fortune.

She went by the name Anna Delvey and duped hotels, bankers and socialites by claiming to be a German heiress.  As part of her defense, her lawyer Todd Spodek has hired a celebrity stylist to dress her in high end labels.

There was a hold up on Friday morning when, after appearing before a judge in Michael Kors, Yves Saint Laurent and Victoria Beckham earlier in the week, Anna was confronted with an outfit she did not like.

She protested and refused to enter the courtroom, delaying the proceedings and infuriating judge Diane Kiesel.

Her lawyer said it was because the clothes were ‘dirt’ and unpressed. There was also a vague claim to her feeling sick and thinking that other inmates at Riker’s Island were not treating her kindly.

When she eventually entered the court, Sorokin cried in front of the judge until she was able to change into an outfit her stylist, Anastasia Walker, had put together for her.

Sorokin then reappeared in court, smiling, in a crumpled white shirt and black pants. 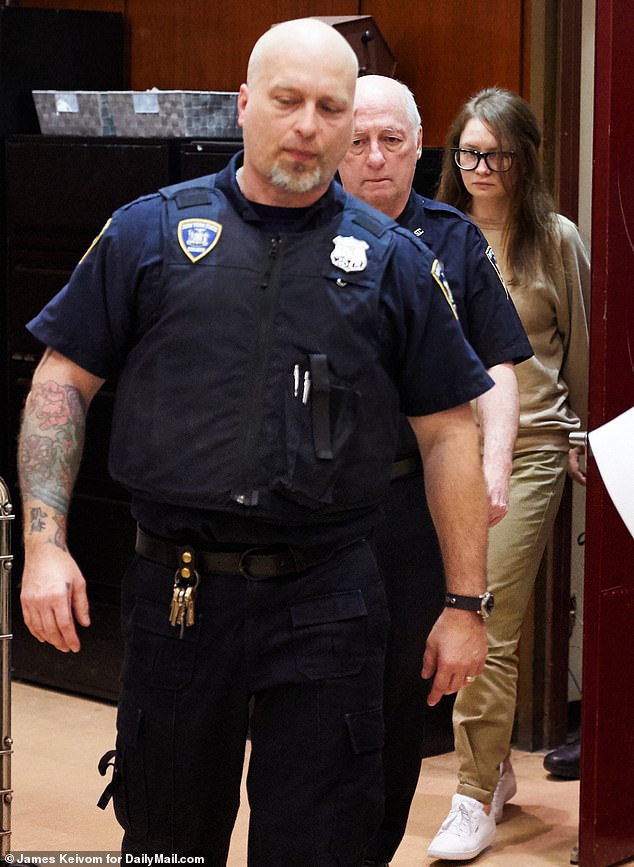 Anna Sorokin walks into the courtroom in Manhattan on Friday scowling after refusing to appear because she was not happy with her outfit. She is shown in prison clothes, a far cry from the designer outfit she was put in by her stylist the day before 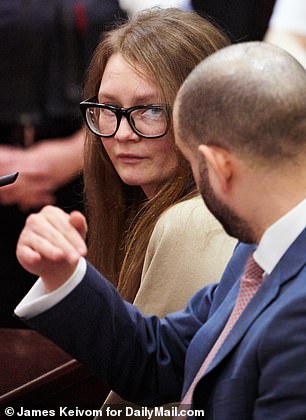 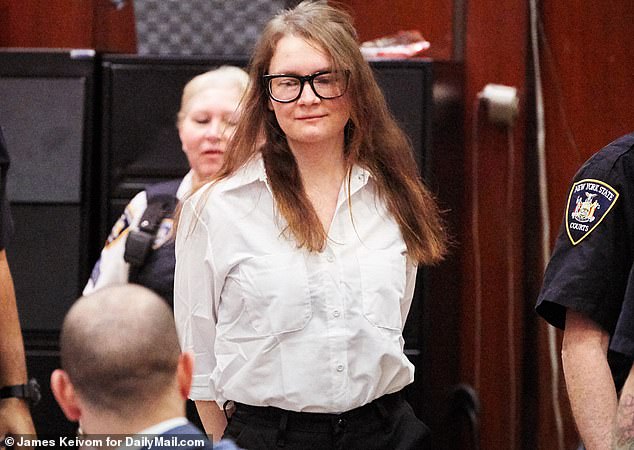 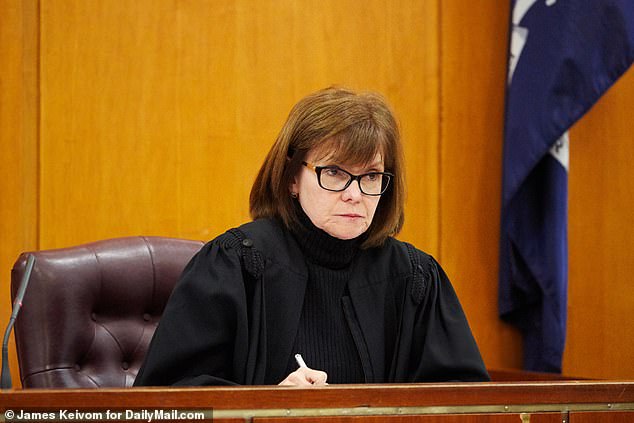 When she reappeared, she was wearing a white shirt, black pants and was in a decidedly better mood 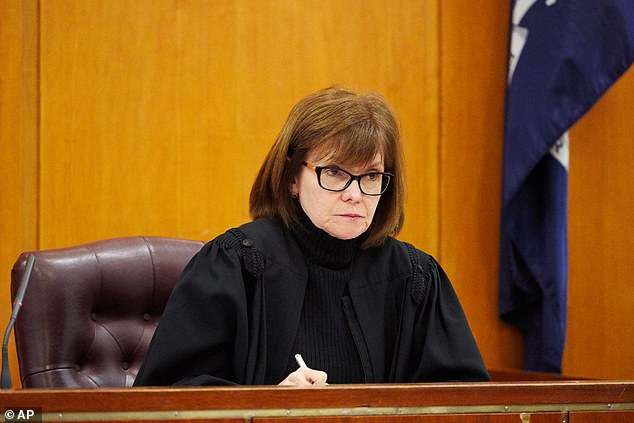 Unimpressed: Judge Diane Kiesel said she would not allow Sorokin to hold up the trial with her fashion emergency

Before she appeared, Judge Kiesel fumed: ‘Your client seems a little too concerned about her clothing.

Your client seems a little too concerned about her clothing. This is a trial. She’s a defendant.
Judge Diane Kiesel

‘This is a trial. She’s a defendant. I’m sorry her clothing aren’t up to her standards.

‘Are you asking me to stop this trial because of the clothing? She’s got to be here,’ she said, according to , which attended the trial.

There was some confusion over what Sorokin’s problem was.

‘She did’t want to appear in her Riker’s clothes. Her clothes are dirty and not pressed.

‘She’s dressed in sweatpants… she feels like she’s not being treated well by other inmates,’ her lawyer Todd Spodek told the court.

The judge replied: ‘She seems to be tired or upset because of the nature of her clothing. I’ve gotten mixed signals here and when other defendants give me mixed signals, I’ve called them out and asked them about the nature of the sickness.

‘I don’t think Sorokin should get special treatment.

‘If she refuses to show up for reasons I think are not legitimate, this case is going to go on with an empty chair,’ she said.

Sorokin’s team has enlisted the services of stylist Anastasia Walker, who has worked with the likes of Courtney Love, T-Pain, and G-Eazy, and who is dressing her in Yves Saint Laurent, Michael Kors and Victoria Beckham.

Walker said she got put in touch with the accused fraudster by their mutual friend Neff Davis.

She said she wanted to help after seeing Sorokin dressed in a $200 outfit from H&M for jury selection.

Her legal team scrambled to get the outfit because they were worried she would look guilty if she was dressed in her prison slacks.

‘The main reason I decided to help out was because of our mutual friend. 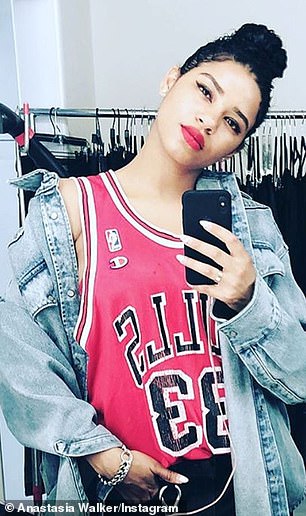 ‘I’m always happy to help, and I love what I do. If it works and I can make it happen, then why not?’ she told Elle on Friday.

Walker would not reveal who is paying her. She said she and Anna had discussions on the phone about how she wanted to be dressed.

‘I really tried to focus on classic silhouettes and classic pieces in general. [The all-black] may change in the future—we may go lighter.

‘It is mysterious chic, and although it’s getting a lot of media attention, this is still her real life. People have made comments that she doesn’t take life seriously, but to me black is just a strong and powerful color. It’s serious,’ she said.

The one item she did not need to add were the defendant’s ‘signature’ Celine glasses.

On Thursday, Ryan Salem of City National Bank testified Thursday about Sorokin’s attempt to get a $22 million loan to open a private arts club.

The bank denied that request but, despite a host of red flags, agreed to lend her $100,000 that Sorokin promised to repay within days.

Salem said the financial statements the one-time darling of the New York City social scene provided in support of the loan ‘didn’t add up.’ 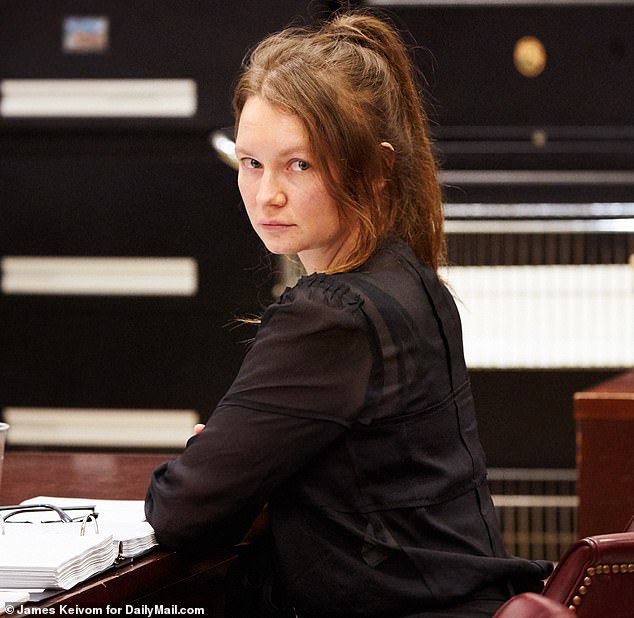 Anna Sorokin, pictured at New York State Supreme Court Thursday, refused to come to court on Friday morning because she was unhappy with her outfit

Prosecutors say the faux heiress left a significant paper-trail in her bid to defraud banks and is accused of swindling various people and businesses out of tens of thousands of dollars in a 10-month odyssey for a taste of the high life.

‘We always believed that she had money,’ Salem said, referring to a fortune of some $67 million that Sorokin claimed to have at her disposal overseas.

‘She seemed to speak the language.

She understood the financial jargon that you need to know to interact and transact in this environment.’

Sorokin’s lawyer says she never intended to commit a crime and planned to pay back any money she borrowed.

Jurors viewed dozens of emails Thursday between Salem and Sorokin, who became increasingly hard to pin down when the bank demanded repayment.

Salem, who spent the day on the witness stand, said his dealings with Sorokin hurt his credibility within the bank. 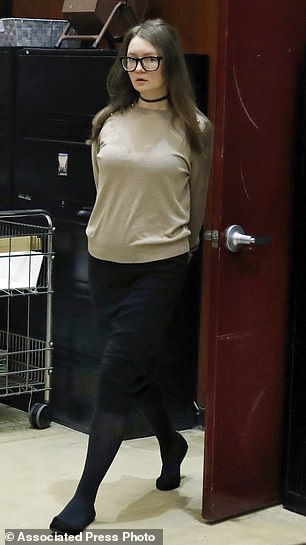 Anna’s courtroom looks have included a beige sweater and skirt. She removed the sweater to reveal a plunging top

‘I went to bat for somebody who at the end of the day was not somebody to go to bat for,’ he said.

The faux heiress, currently on trial in Manhattan Supreme Court, turned heads on the first day her trial on Wednesday when she showed up to court in a sleek, low cut black dress and choker. 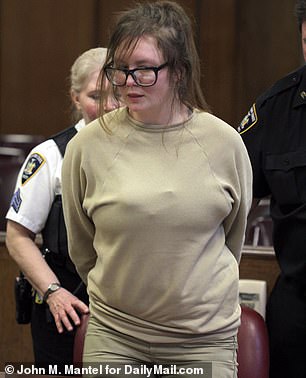 It was a stark contrast to the Rikers Island prison uniform and unkempt appearance she sported during an earlier court date. She is pictured above in February during a hearing

She is accused of swindling various people and businesses out of tens of thousands of dollars in a 10-month odyssey for a taste of the high life.

Her attorneys had also reportedly tried to get her into stilettos but the Department of Corrections deemed them to be too dangerous.

An Instagram account titled AnnaDelveyCourtLooks has since been created and features two variations of the outfit she wore during the first day of the trial.

During the trial on Wednesday, the jury heard that Sorokin lived in luxury New York hotel rooms she couldn’t afford, promised a friend an all-expenses paid trip to Morocco and then stuck her with the $62,000 bill, and peddled bogus bank statements in a quest for a $22 million loan.

Sorokin, jailed since her arrest, faces deportation to Germany regardless of the outcome of the trial because authorities say she overstayed her visa.

She denies the charges and insists she was always trying to be seen as a businesswoman.