An Oregon mother has slammed the hospital that discharged her infant daughter hours before she fell into a coma and later died of strep-related meningitis.

The first-time mother told hospital staff that she had tested positive for a strep infection when she was pregnant and believed the little girl may have contracted it.

However, nurses gave Evianna a saline drip and Tylenol and sent her home, reported the .

As her condition deteriorated, McCall took her daughter back to the ER, where she was diagnosed with bacterial meningitis that she had, indeed, developed from strep bacteria.

Evianna was transferred to a hospital in Portland, but it was too late. Just 48 hours after the first symptoms began, she passed away.

McCall said she wants to turn the tragedy into a lesson for health professionals to be educated on the signs of meningitis and for parents to recognize them as well so they can make sure their child is treated in time. 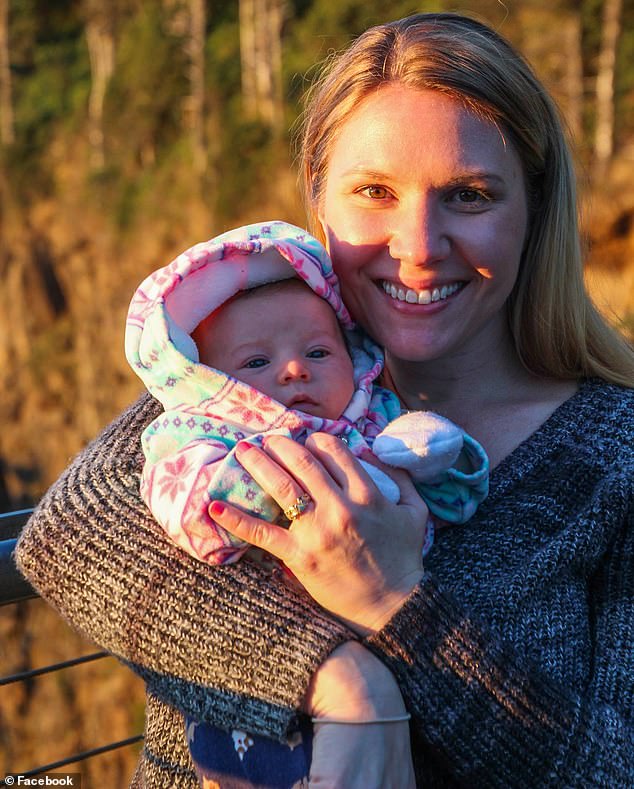 Ginger McCall’s seven-week-old daughter, Evianna, had a fever and heavy breathing on March 15. Nurses in the ER at Salem Health said she had a viral infection, gave her fluids and Tylenol, and discharged her. Pictured: McCall with Evianna 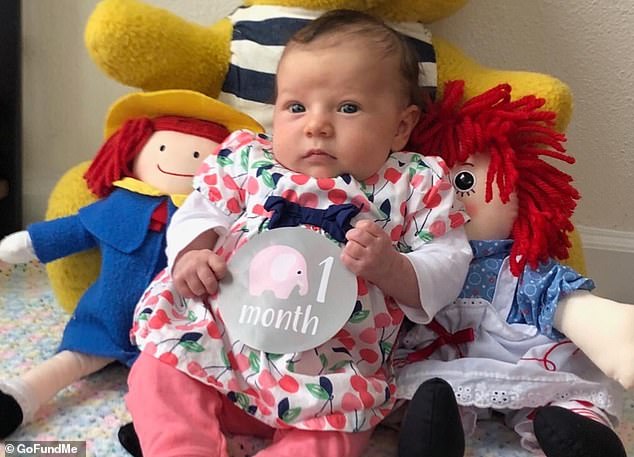 McCall took her daughter to the pediatrician in Salem, Oregon, that same day, who told her to go back to the ER. That’s when doctors finally recognized that Evianna (pictured) had bacterial meningitis

McCall told the Statesman Journal that she was ecstatic when she discovered that she and her husband, Omar Quintero, were expecting their first child.

While she was pregnant, she developed Group B streptococcus, a bacterial infection that can be found in a pregnant woman’s vagina or rectum.

According to the Centers for Disease Control and Prevention (CDC), it’s found in 25 percent of expectant mothers.

Not every baby born to a woman with Group B strep will become ill, but the infection can be passed to the infant during delivery.

Evianna was born on January 24 and, for her first few weeks of life, neither her mother nor father noticed anything was wrong.

But, on the morning of March 15, McCall said her daughter was running a fever of 101.9F, so she and her mother-in-law rushed Evianna to the emergency room at Salem Health Hospital. 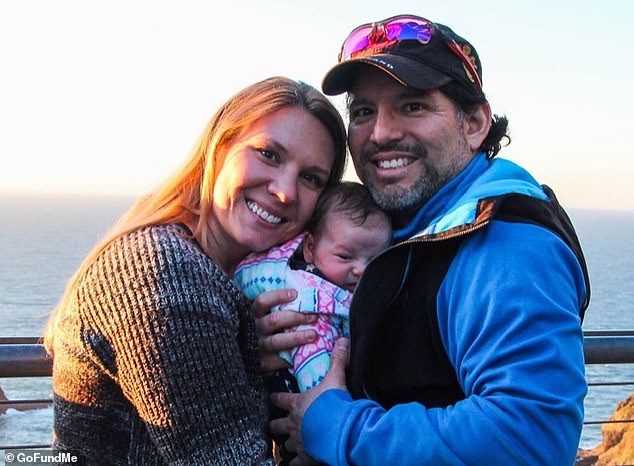 McCall had developed Group B streptococcus, a bacterial infection that is found in 25 percent of pregnant women’s vaginas or rectums. Pictured, left to right: McCall, Evianna and her husband Omar Quintero 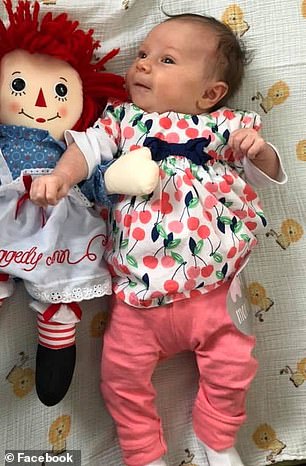 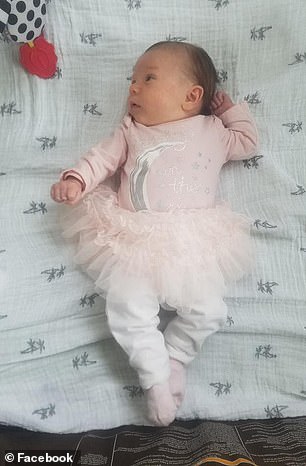 The infection had been passed during delivery and Evianna developed late-onset Group B strep disease, which had made her appear healthy at birth and during her first few weeks of life

She told staff about her Group B strep diagnosis, but claims doctors dismissed her concerns.

Nurses said she had a simple viral infection, gave her fluids and Tylenol, and discharged her, even though she still had a fever.

They went back home, but Evianna was making a noise that McCall likened to a  ‘terrible mewing/crying’.

She called the pediatrician who, after seeing the infant, told McCall to go back to the emergency room immediately.

‘I figured the doctors would be able to fix it,’ McCall told the Statesman Journal. ‘I remember thinking: “We don’t live in the 1800s. Surely someone will save my child”.’

It was then that hospital staff performed a spinal tap and diagnosed Evianna with bacterial meningitis.

Meningitis occurs when the protective membranes that cover the brain and spinal cord become inflamed.

Evianna had developed the disease due to late-onset Group B strep disease, which had made her appear healthy at birth and during her first few weeks of life.

However, once the disease presents itself, symptoms include fever, lethargy, difficulty feeding and difficulty breathing.

About four to six percent of all babies who develop Group B strep disease will die, according to the CDC. 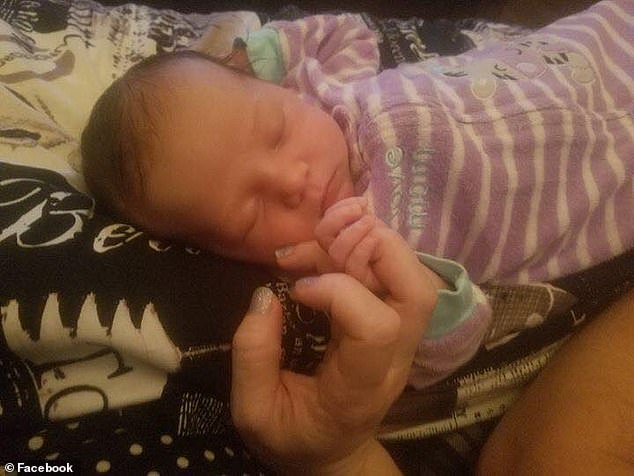 Evianna (pictured) was transferred to Oregon Health & Science University Doernbecher Children’s Hospital in Portland, where her vital signs dropped and she was put on life support 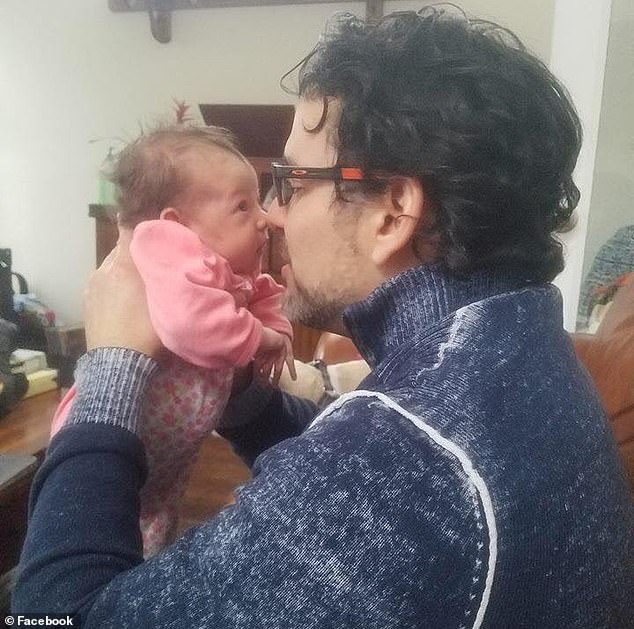 On March 17, doctors told McCall and her husband that their daughter was brain dead. Her parents elected to withdraw life support. Pictured: Evianna with her father

At this point, Evianna’s health was deteriorating rapidly and she was nearly comatose by the time the ER stabilized her enough to have her transferred to Oregon Health & Science University Doernbecher Children’s Hospital in Portland.

‘They did their very best, but, by the time she got there, it was just too late,’ McCall said.

Evianna’s vital signs began dropping and the next day, March 17, doctors told McCall and her husband that their daughter was brain dead.

Around 4,100 cases of bacterial meningitis are reported every year, causing 500 deaths, according to the CDC.

‘I will never get to know what color her eyes would’ve been or what her voice would’ve sounded like or who she would’ve grown up to be,’ McCall told the Statesman Journal. ‘That just kills me.’

Looking back, she said she wishes staff at Salem Health had paid closer attention to the cry Evianna was making – a tell-tale sign of meningitis in a baby.

She said she doesn’t have any plans to sue the hospital, and just wants to make sure other parents know the symptoms so they can make sure their children get proper treatment.

McCall’s sister has set up a page to help cover funeral and living expenses.

Mac Miller dead at 26: Rapper said overdosing was 'just not cool'
Florida couple find a hidden camera on Carnival Cruise ship
Why can’t so many young, healthy men make love without a little blue pill?
more than 3,000 patients possibly exposed to HIV, hepatitis in New Jersey surgery center
Can gel manicures give you skin cancer? Top dermatologist explains
Cincinnati Zoo's beloved hippo makes her annual pick for the big game and vomits a lettuce leaf
Nurses gather on rooftops of hospitals in Florida and Tennessee to pray
Trump says 'I am your law and order president'