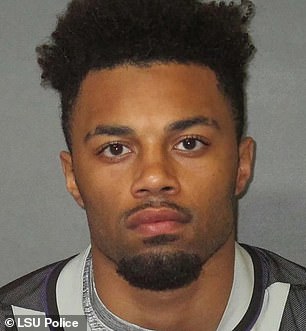 A Louisiana State University football player has been accused of raping a ‘blacked out’ woman who asked to use his bathroom on the college campus Sunday.

Tae Provens, 19, was arrested and booked on a third-degree rape charge Wednesday, after a few days before the female told police at the Baton Rouge school that he sexually assaulted her around 3am when he gave her permission to use his toilet.

The female claims she and a friend were visiting his apartment at Riverbend Hall and had been there an hour and a half when he followed her into his en-suite bathroom and she began to lose consciousness.

The woman said she had been drinking earlier in the night.

Police said the woman accused Provens – who is 5ft 11in and weighs 185 pounds – of removing her clothing. ‘Next thing she remembers is her shirt coming off and trying to hold on to her underwear as it was being taken off,’ the police statement reads.

The alleged victim claimed the LSU Tigers running back – whose full name is Alfonso Tymaseol Provens – went behind her then began to vaginally rape her when she was face down on a bed so she told him: ‘No, no. no.’

‘She stated this caused Provens to stop temporarily but then he went behind her and attempted to penetrate her again,’ the police report said. 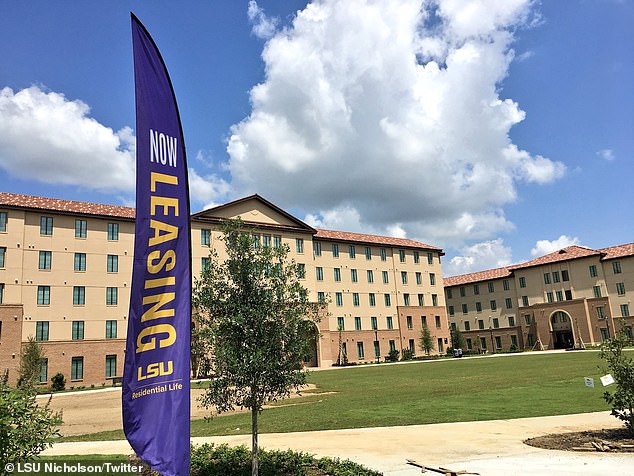 Provens’ accuser alleged she eventually freed herself from underneath him, put her clothes on and left the bedroom.

Law enforcement spoke to a woman who saw the accuser leave the sportsman’s room and the witness confirmed the accuser was upset.

The female who spoke to the alleged victim says she asked if Provens had sex with her even though she said no and the victim responded ‘yes’.

Provens – an Interdisciplinary Studies student – told the witness he had sex with her but stopped when she said ‘no’, according to police documents.

Freshman Provens – originally from Gurley, Alabama – shared on his Twitter page just three days before the allegations, that he was leaving the university.

The alleged victim says she asked to use his bathroom and he took her to one inside his bedroom. Pictured is a rendering of a two-bedroom apartment at Riverbend Hall 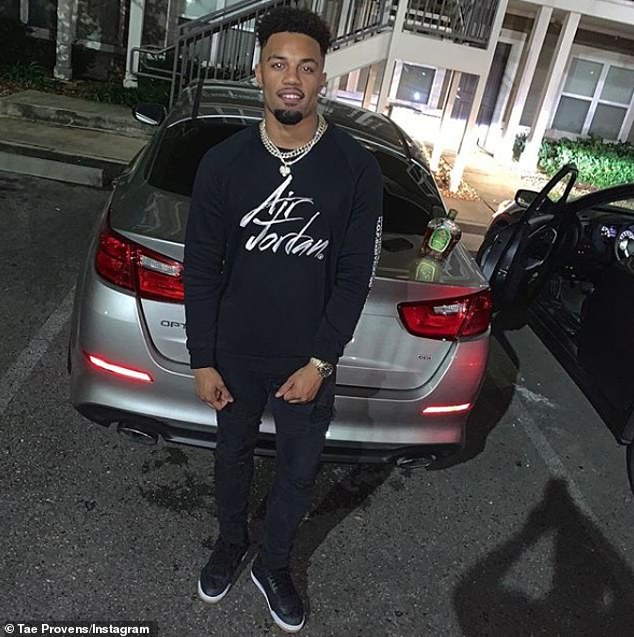 Affidavit says the accuser told Provens ‘No, no. no’ as he allegedly sexually assaulted her 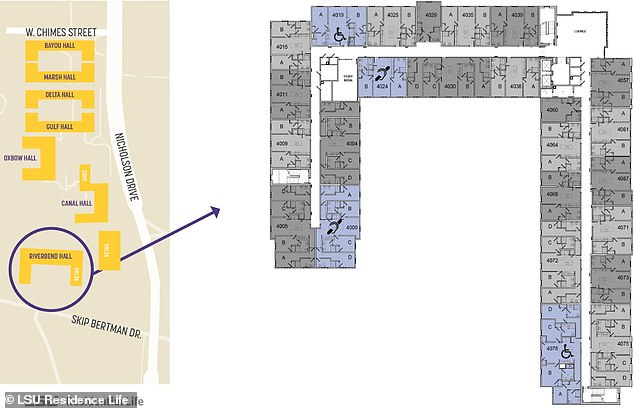 ‘LSU will always have a special place in my heart,’ Provens wrote on a note application and shared the screenshot on the micro-blogging website.

‘I have decided to separate myself from LSU and pursue my dreams somewhere else! I have nothing but love and respect for LSU and wish them nothing but the best in the near future.’

A university spokesperson confirmed Provens’ arrest to  and said he has hasn’t been a part of LSU Tigers activities since he entered the NCAA transfer portal on March 21.

He enrolled with the team January 2018 and played two games as a freshman.

Provens told the witness he had sex with her but stopped when she said ‘no’, according to police documents

‘We take any and all allegations like these seriously, and currently, this is a law enforcement investigation,’ Ernie Ballard said in a statement.

‘Once the law enforcement component is completed, the Office of Student Advocacy & Accountability and the Title IX office will conduct their investigation as well.

‘At LSU, we’re committed to ending sexual violence and maintaining a community of respect, and an alleged incident like this goes against everything we stand for within our community.’

They added that the unidentified alleged victim has the school’s support.

Ballard continued: ‘Our thoughts go out to the victim in this incident and every resource available through the university is being offered through the LSU CARE Team.’ 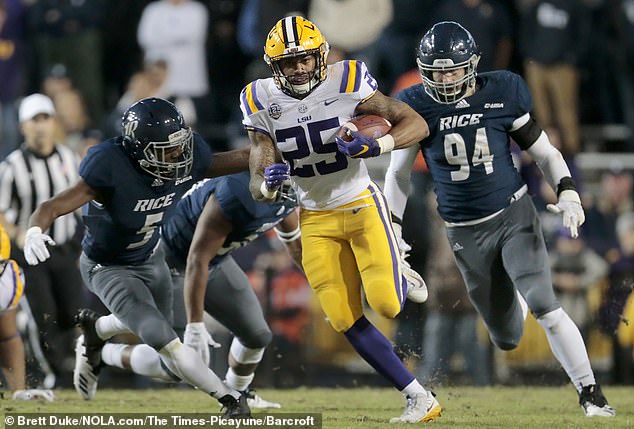 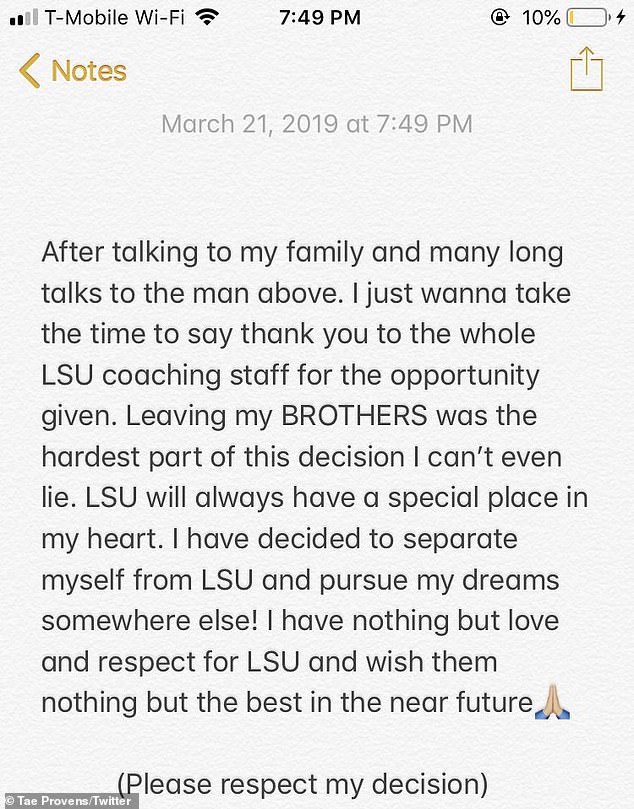 Freshman Provens – originally from Gurley, Alabama – shared on his Twitter page three days before the alleged incident, that he was leaving the university 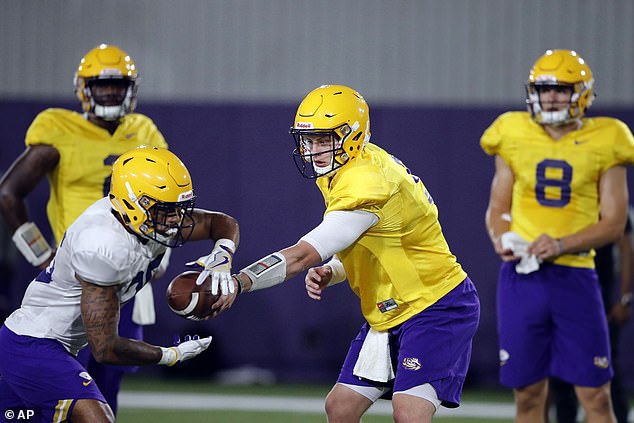 Provens (left during their NCAA college football practice in Baton Rouge on August 6, 2018) wrote on social media: ‘I have decided to separate myself from LSU and pursue my dreams somewhere else! I have nothing but love and respect for LSU’

What it is prefer to be a 34-year-old mom and a forensic trauma cleaner
If Diana had worn a seatbelt she would have been at Harry's wedding says 9/11 pathologist
Shopper provokes hilarious reaction on Twitter after receiving huge receipt
Venezuelans defy border blockade to enter Colombia as Juan Guaido calls for protests
Mark Zuckerberg says it's not Facebook's job to identify political ads
Katy Perry, Taylor Swift and Eminem inspire a cult member to pursue a pop music career
Trump brags he did better than Obamacare with new executive order
Mother-of-two lives with 90% of her body covered in psoriasis plaques