Police were called in to move up to 17 caravans off a football training ground after travellers allegedly broke into the car park and swarmed the leisure centre’s toilets.

The adults were putting out washing and cleaning their caravans but children were reportedly urinating on the grass.

An elderly woman who lives near the Crook Log Leisure Centre, Bexleyheath, south-east , said she could also hear music blasting at around 10pm on Monday night – with cars driving up and down to the site.

A spokesman for the leisure centre said: ‘There were around 30 people with their caravans and up to four dogs running around.’ 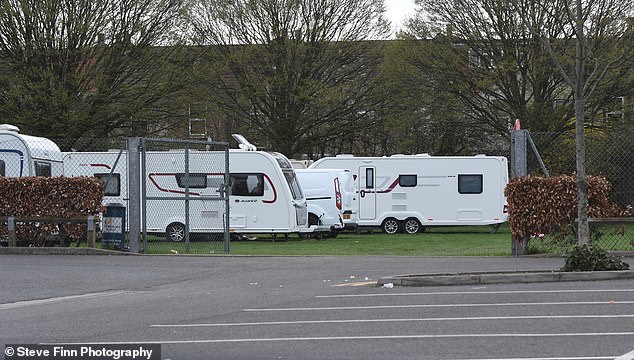 Up to 30 travellers in 17 caravans allegedly breached the gates at the Crook Log Leisure Centre in Bexleyheath, south-east London 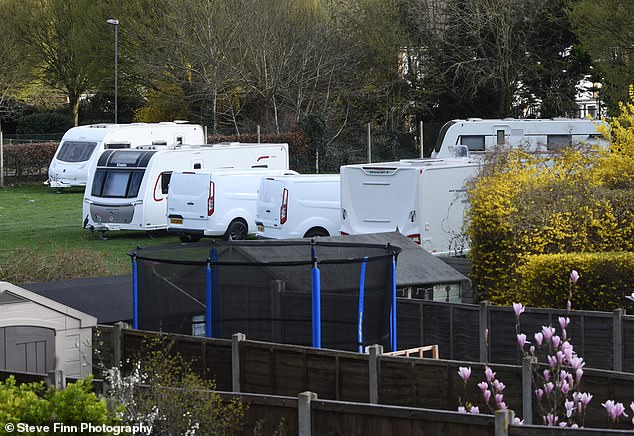 He continued: ‘They just drove in through the gates and must have broke the lock last night.

‘I did have some staff trying to stop them coming through though.’

He said they were ‘very abusive’ to leisure centre staff and kept going into the building to use the toilets.

‘It was unbelievable. They said they just wanted to stay overnight, they said they were going to move the next day and were just using the centre as a pit stop.’

He added: ‘They just kept coming in the building asking to use the toilets.

‘We let them in two or three at a time but they didn’t listen and just kept coming in.

‘It felt uncomfortable. I don’t prejudice against them but they were abusive towards my staff and the mess they have left behind is bad. I have got to pick it all up tonight.’ 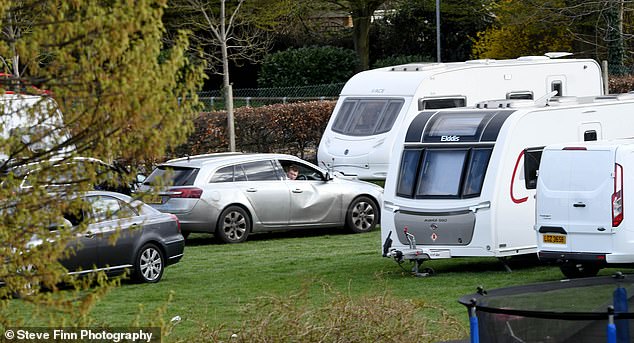 A spokesman for the leisure centre said: ‘They just drove in through the gates and must have broke the lock last night’ 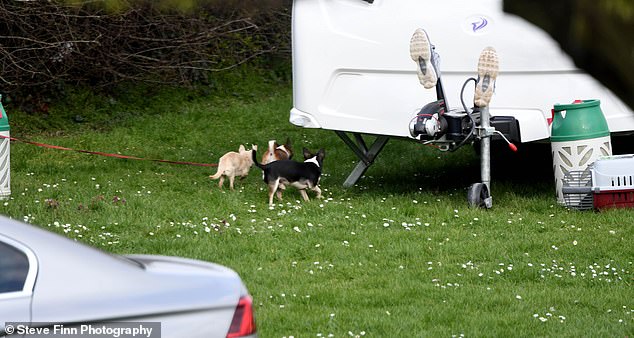 The travellers had around four dogs with them. Leisure centre staff allegedly received abusive comments when the group tried to use the centre’s toilets

Police confirmed the travellers drove on to the field at around 6.30pm on Monday.

A Twitter user, who is believed to live in the area, said: ‘Lots of travellers, there rubbish and dogs on playing field beside leisure centre.

‘Please use my increased council tax to rid the children’s playing field of this problem Asap. #eyesore#unwanted.’

Bexley Council said it had taken action to move the travellers today.

‘We are aware of this and are working with the local police to resolve the matter,’ a spokesman from the council told a local news outlet.

They added: ‘Section 61 notices have been served, which means there is a legal requirement for the site to be cleared of all vehicles today,’ 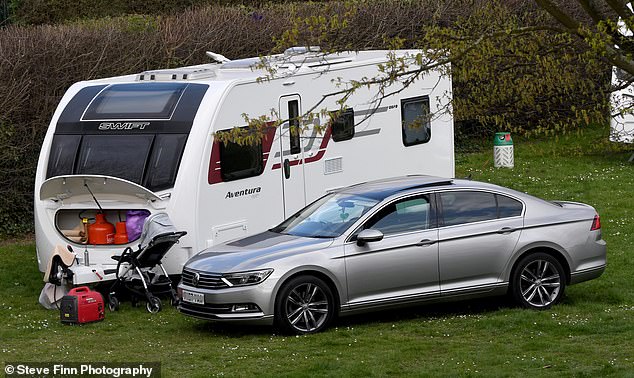 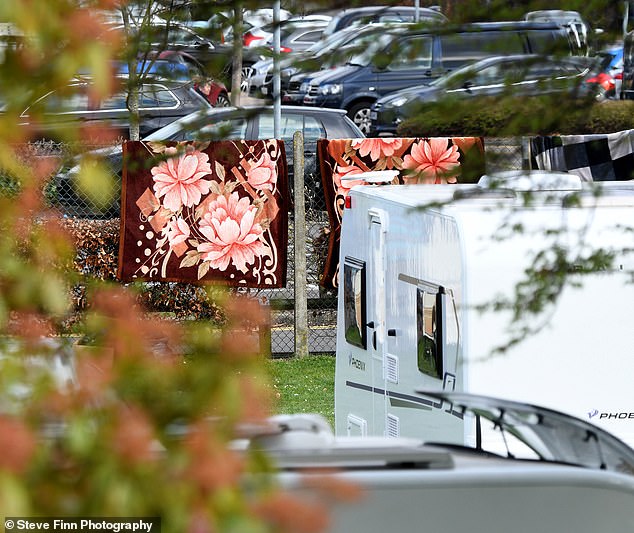 Metropolitan Police said the travellers were moved from the site at 6.20pm tonight after the council’s Section 61 notice was sanctioned 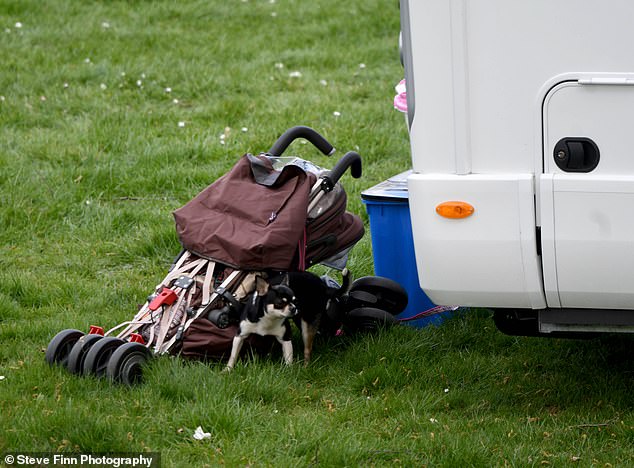 There were reports that the children with the group had urinated on the grass at the centre, while the adults using its toilets and showers

The Metropolitan Police moved the travellers from the site at 6.20pm tonight after the Council’s Section 61 notice was sanctioned.

It came after caravans took over a Tesco car park near Wembley yesterday.

At least 12 caravans, mobile homes and vans were left over scores of parking spaces meant for customers at the store, which is less than a mile from Wembley Stadium. 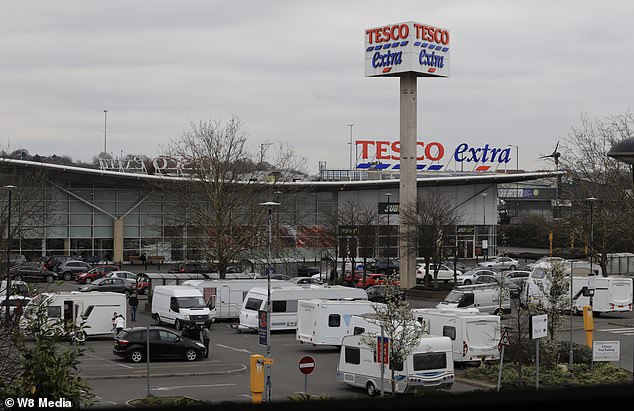 Shoppers were shocked when a group of travellers took over their Tesco Extra car park in Wembley, north-west London 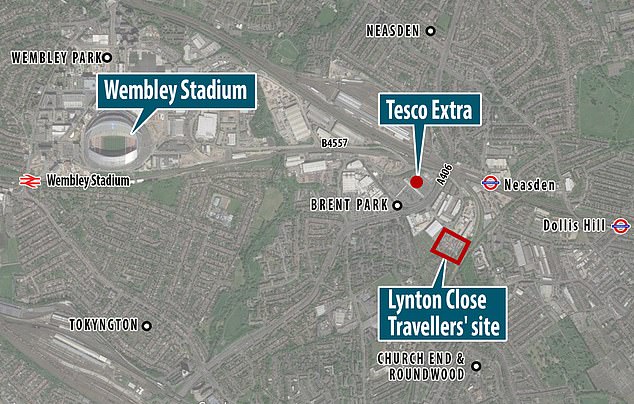 Women from the group were seen pushing babies around in shopping trolleys after appearing from their homes in dressing gowns.

The store remained open and was serving customers as normal yesterday and a spokesman said business was unaffected. Brent Council said they were not involved.

It is not clear if the two groups of travellers are linked.