Armed police are in a stand-off with two suspected burglars who fled onto a rooftop when officers saw them tampering with a motorbike.

Footage from the incident shows the duo on the rooftops in Kingsgate Road, near Kilburn, northwest London, throwing roof tiles at police below.

More than a dozen police officers are thought to be at the scene after a member of the public reportedly saw one of the men carrying a gun.

Police were alerted to the men at around 5pm after they were seen tampering with a motorbike – before the duo fled onto the rooftops and have been there ever since.

An eyewitness, told MailOnline: ‘Apparently it is a suspected burglary gone wrong and when police approached them they got up on the roof and started ripping off roof tiles and throwing them at the police. 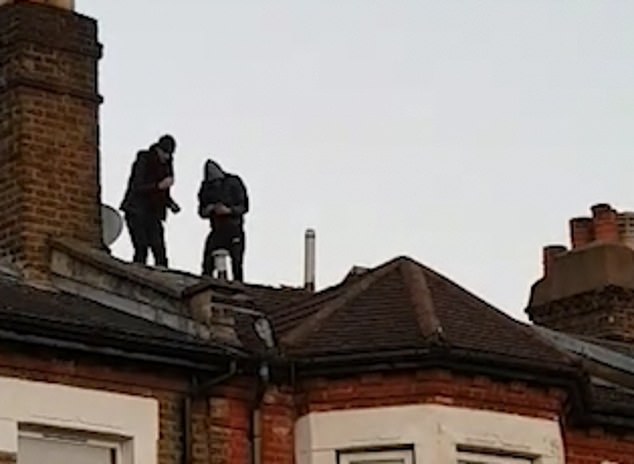 More than a dozen police officers are currently at the scene, and the men are reportedly throwing roof tiles at police in Kilburn, northwest London

‘I saw one of the men with what looked like a knife, or could be a piece of roof tile, making stabbing motions towards the police.

‘The man walking around on the mobile phone said ‘I want to die’ and seemed completely out of it.

‘He was on the phone the entire time. I’m not sure to who.

‘The two of them somehow found some chairs from somewhere and were collecting glass and other roof tiles and ripped up a Velux window.

‘There are a lot of armed police there at the moment and a large area has been cordoned off, we were told someone might have a gun.’ 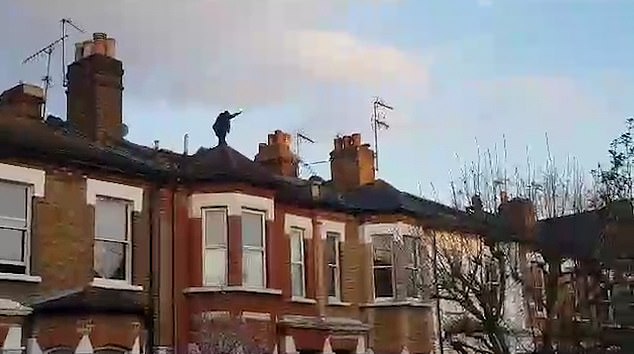 At the start of the clip one of the men can be seen traversing the rooftops while his friend sits on a raised part of the roof – a helicopter can be heard overhead.

You can then see one of the men repeatedly hitting a part of the roof, with what looks like a roof tile.

A spokesman for the Met Police said: ‘At 17:11hrs on 26 March police observed two males seen tampering with a motorcycle in Mazemot Avenue, NW6.

‘They were challenged by police and fled, making their way onto the roof of a nearby building in Kingsgate Road, where they currently remain.

‘A member of the public reported seeing one of the men in possession of a firearm. This has not yet been confirmed.

‘Specialist firearms officers are in attendance as a precaution. No arrests. Cordons and road closures are in place.’

Rebecca Judd shows off her cleavage in a stunning strapless purple lace at Brownlows
Take Me Out contestant's get matching tattoos during their first date
Kylie Jenner shares sweet snap cradling baby niece Dream as she posts throwbacks
Melania is glamorous in grey for Armistice commemorations in Paris
Strike action in Birmingham leaves rubbish left over from Christmas piled high in the streets
Alesha MacPhail’s mother reveals six-year-old daughter’s last words to her sister
David Beckham kisses Harper on the cheek while Victoria relaxes as family continue Italian getaway
Coronavirus death toll nears 1,800 as more than 71,000 have now caught the deadly infection