A cook book from 1688 that contains ‘wacky’ home remedies to tackle serious diseases such as tuberculosis and the plague with ‘infused horse dung’ and ‘snail water’ may also contain the oldest curry recipe in Britain.

The earliest known UK recipe for curry was written in a 1747 cookbook by -based chef Hannah Glasse.

This book, which has belonged to the same unnamed family since it was written, was added to until around 1755, with the curry recipe one of the last entries.

Experts believe it is most likely to have been written in the 1750s based on a handwriting analysis, with four people thought to have contributed to the book.

Another reason the recipe was likely written after 1747 is the mention of soy, which was not commonly used in western Europe until the 1770s, although would have been available to wealthy families earlier.

The book was started in 1688 by Mrs Sarah Jackson, who worked as a cook for the household and has access to many of the ingredients mentioned.

The more peculiar tonics include snail water, which is made by grinding garden snails in a pot with herbs and fennel before boiling them in milk and then adding mint and sweetening with sugar to taste. The concoction would then be given to those suffering from tuberculosis, a disease of the lungs that caused sufferers to cough up blood and usually killed half of those who had it through weight loss and fever until the mid 1900s when vaccines were created. 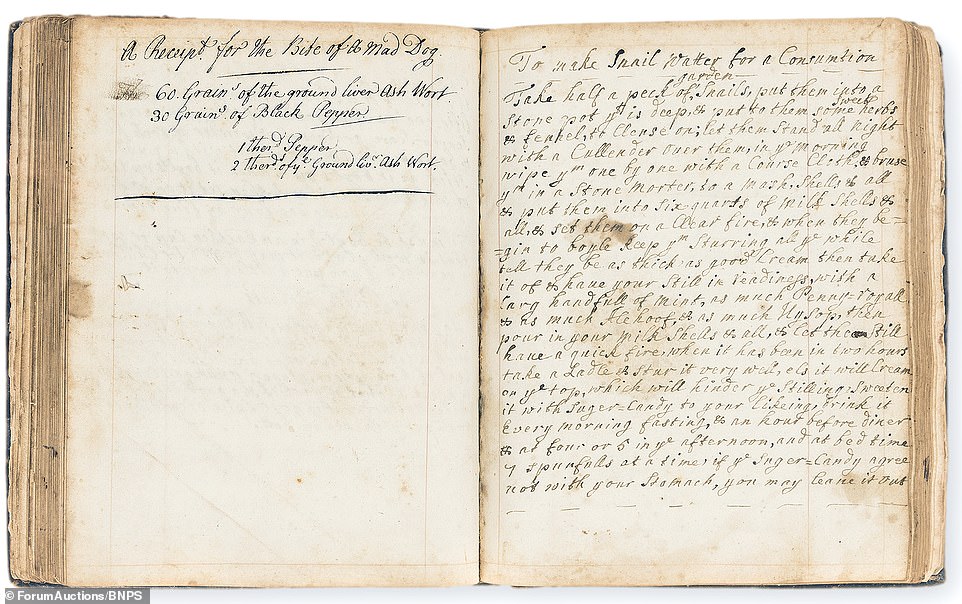 A 300-year-old cookery and home remedies book, pictured, has been unearthed and will be sold at auction where it is believed it could fetch up to £6,000. It details recipes for ‘wacky’ cures for a variety of illnesses including tuberculosis and the plague. The book belonged to an unnamed family and has been passed down and added to through the generations. The book was started in 1688 by Sarah Jackson, who is believed to have been the family’s cook and would have had access to the ingredients it mentions. This page reveals how to make ‘snail water’ to tackle consumption, now known as tuberculosis 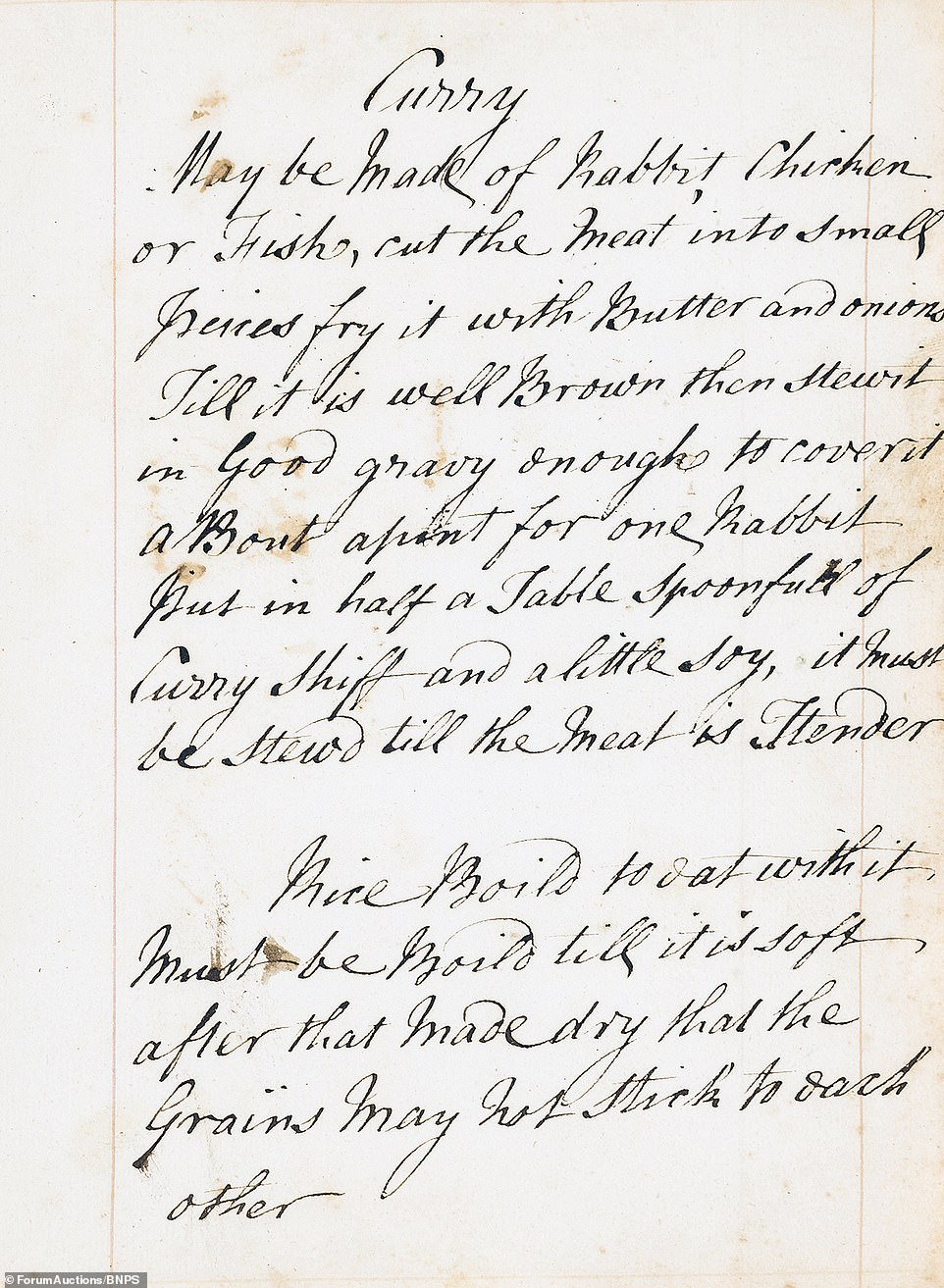 One of the most eye-catching pages in the book is an early recipe for curry, pictured, suggesting the cook use rabbit, chicken or fish. It is unknown exactly when this recipe was added but Forum Auctions believe it is from the 1750s, making it one of the earliest to ever appear in Britain. The first curry recipe on record is from 1747, published by London-based cook Hannah Glasse. This book’s recipe is also one of the most straight-forward among the pages and could easily be followed today, suggesting the meat be fried in butter until brown before the curry mixture is added 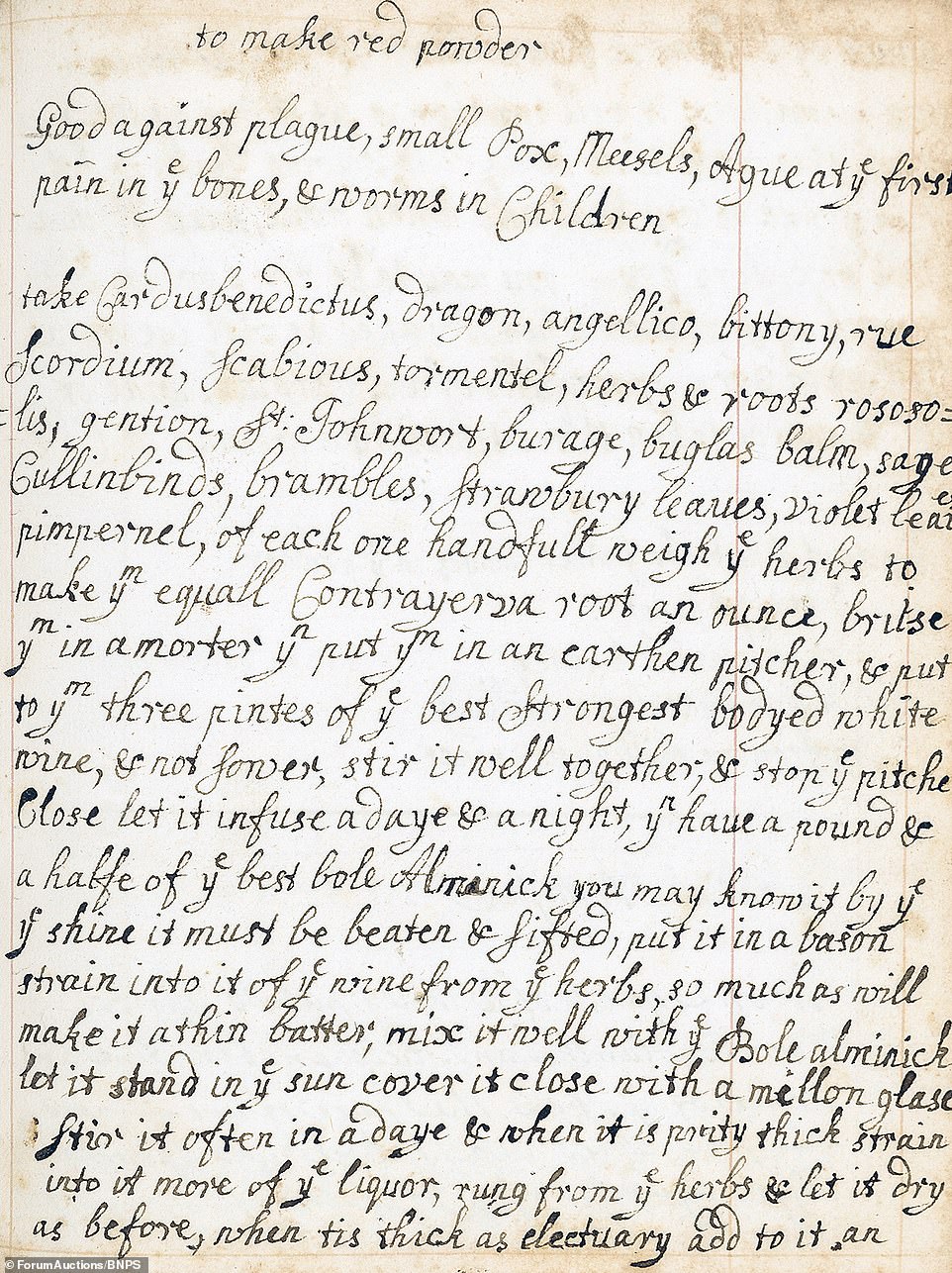 One of the recipes, pictured, reveals how to make a ‘red powder’ used to combat the plague, smallpox, measles and parasites in children. Although some of the text is illegible, it suggests using a combination of herbs and flowers alongside white wine to create a thin batter which should be left to stand in the sun 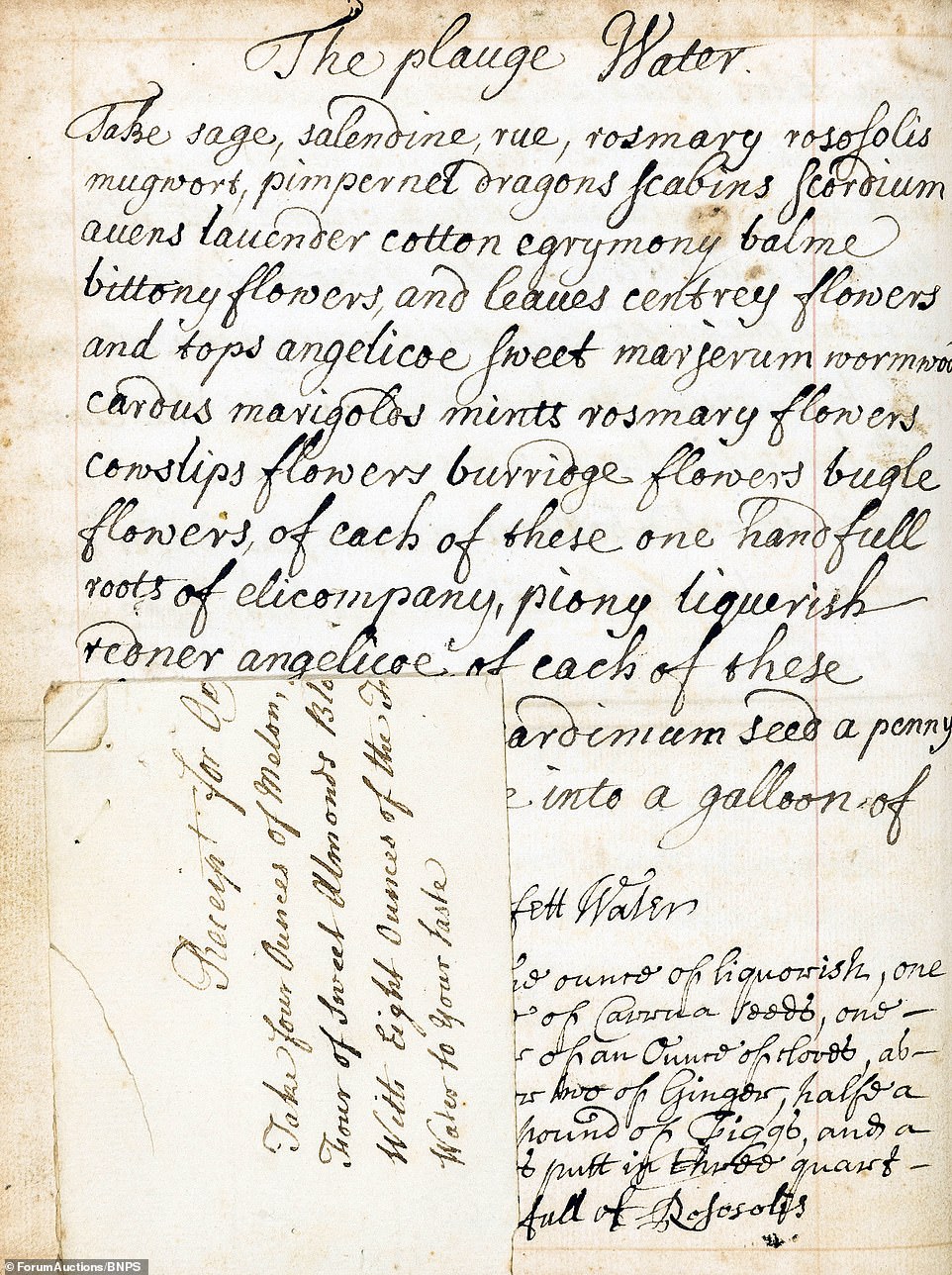 Another home remedy is for Plague Water, pictured. It is another remedy that relies on a mixture of herbs including sage and rosemary alongside the lavender cotton flowers and a variety of other plants and spices including ginger. The book also suggests the water should be taken alongside melon and sweet almonds, likely to improve the taste. This is likely to be one of the earliest recipes written because the plague killed around 100,000 people in London between 1665 and 1666, leaving the public fearful of another bout for many years to come 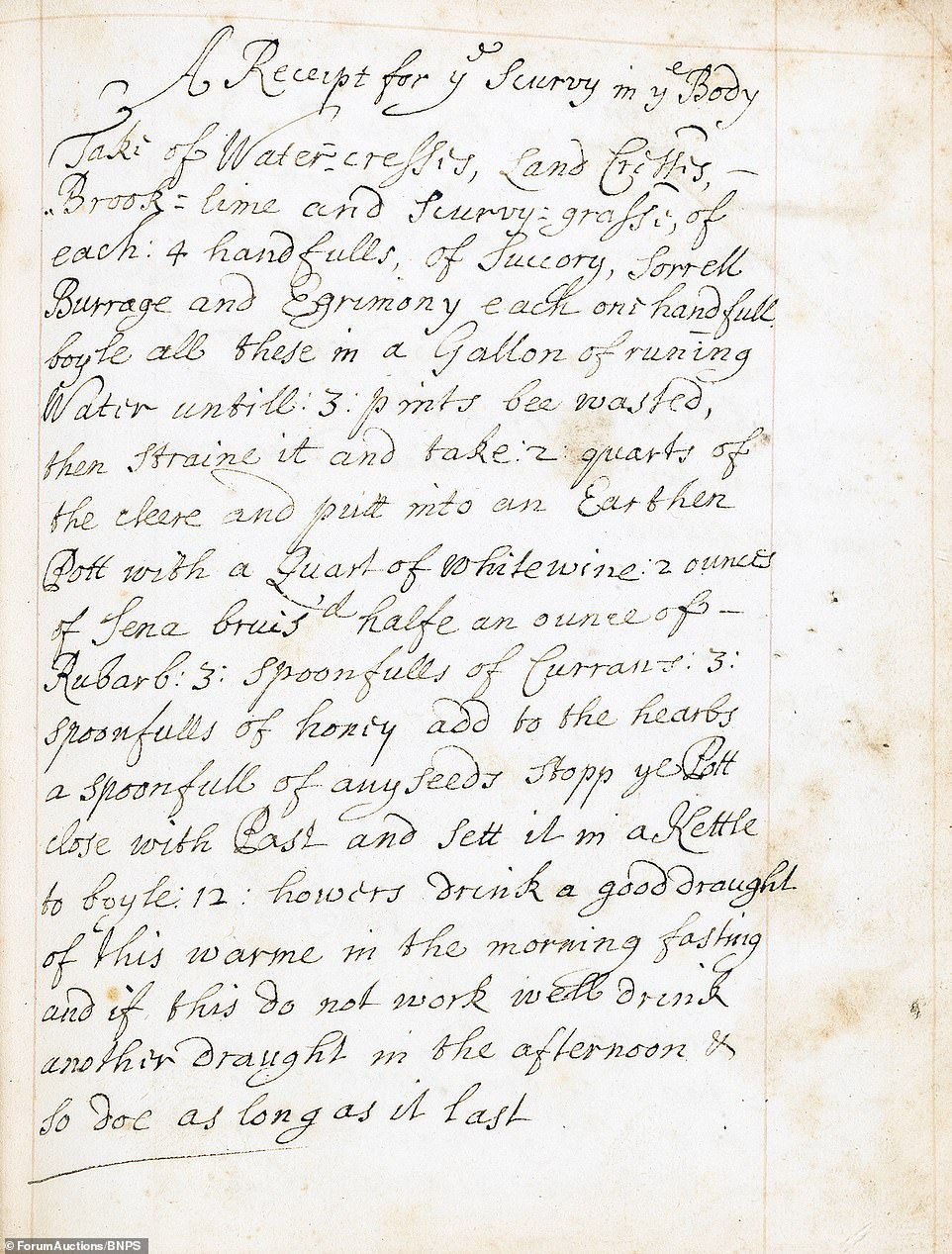 This page reveals a method to combat scurvy, a condition where the body lacks vitamin C. Symptoms include muscle weakness, blood infections, gum disease and eventually death, with sailors frequently afflicted by it due to malnutrition on long voyages. The ingredients include watercress and lime, which would provide the vitamin C, and are combined with white wine to create a boiled drink that should be taken once in the morning and afternoon for as long as it takes until cured

The recipe manuscript is now being sold for the first time at London-based Forum Auctions with an estimate of £6,000.

Among the unusual recipes is ingredients for ‘plague-water’ – mixing herbs and plants such as sage, celandine, rosemary, mugwort and cardamom seed in a ‘gallon of brandy’.

Plague-water was a well-known remedy in the 17th century intended to prevent or cure the illness and Samuel Pepys referenced it in his diary in 1665 saying he was given a bottle of plague-water to take home.

Animal waste was commonly used in medicine in this time period for all sorts of ailments and treatments, including for poultices for burns during the Great Fire of London.

There is an incomplete recipe for infusing horse dung that does not make it clear what it would be used for.

There is also a powder for ‘the bite of a mad dog’ and a red powder ‘good against plague, smallpox, measels, ague at ye first pain in ye bones and worms in children’. 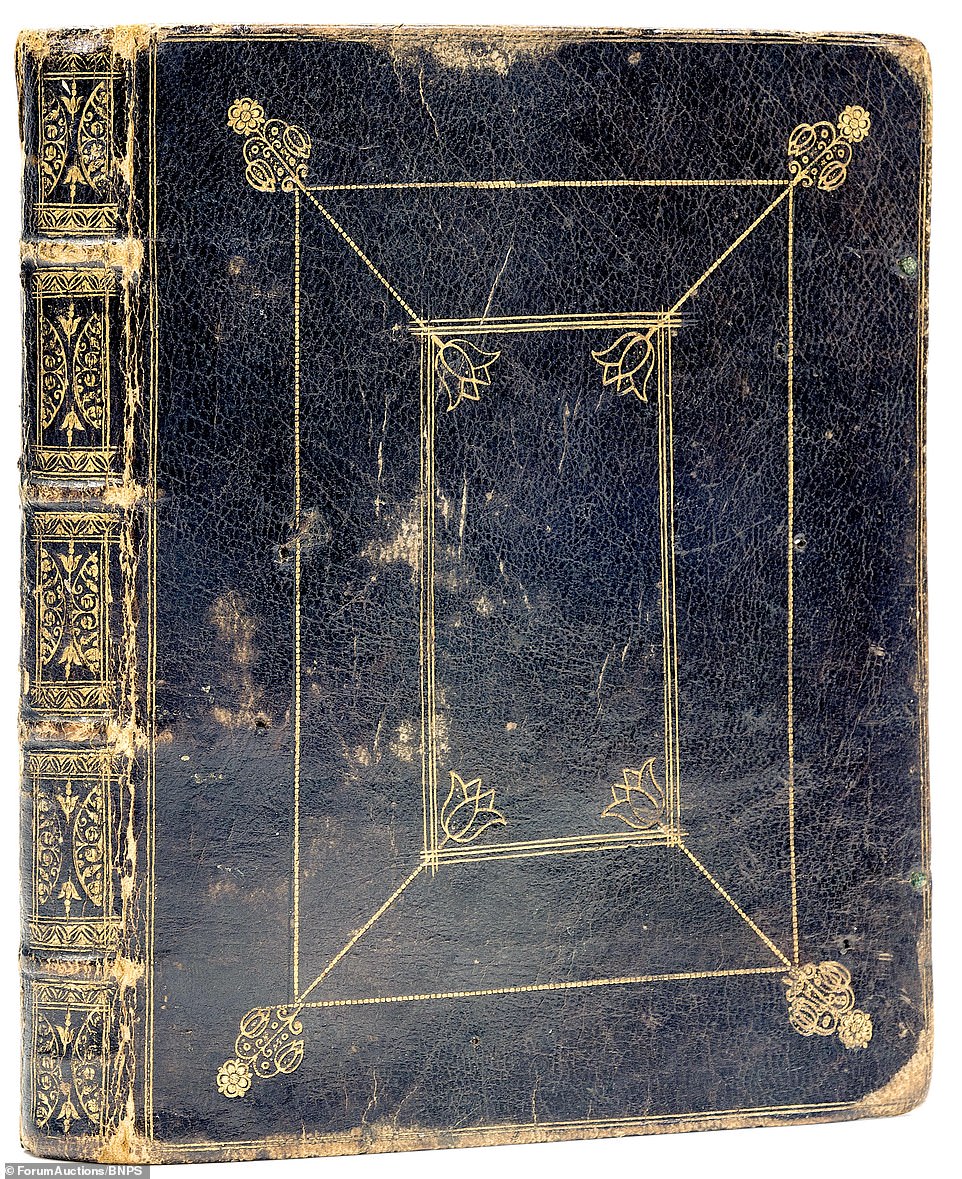 The book, pictured, has passed down within an unnamed family for generations and auction house Forum Auctions said its condition was among the best they have ever had. It has never been sold before and the auctioneers believe this will help generate interest and drive up the price 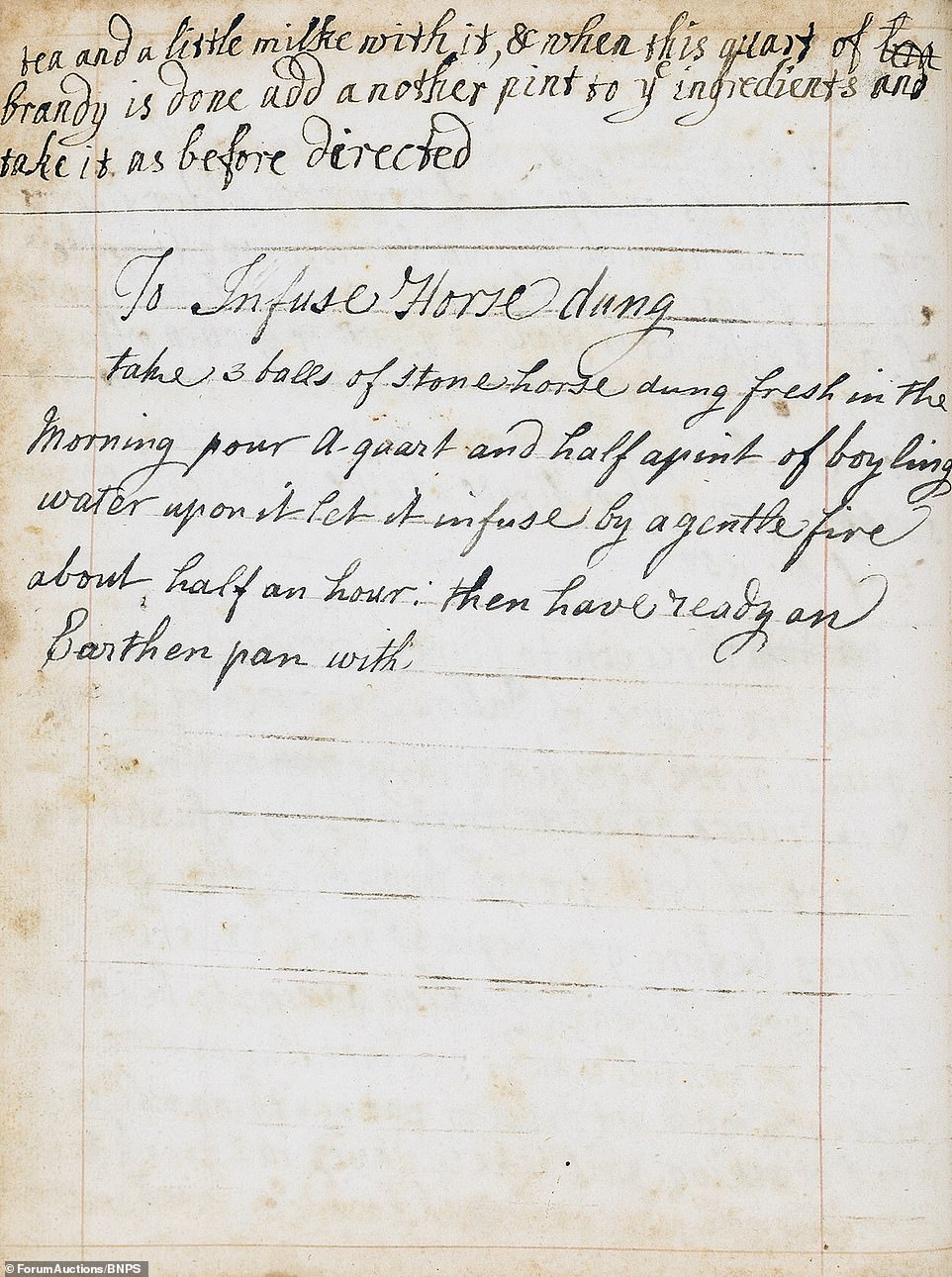 Animal waste was frequently used in medicine during the 1600s and this recipe suggests how to create a remedy of infused horse dung by collecting faeces ‘fresh in the morning’ and then putting it in a pan with boiling water before placing it over a ‘gentle’ fire for half an hour. It is unknown what this concoction would be used to treat

Max Hasler, from Forum Auctions, said: ‘This is a receipt book, it was a sort of cross between medical and cookery recipes.

‘The lady of the house would have access to the herbs so as well as doing the cooking and planning how the kitchen worked, she would also be the one making tonics and medicines for the household.

‘The book was started by a Mrs Sarah Jackson – she would have been senior staff in the household – but is written in different handwriting so it was clearly passed down the generations and covers a period of just under 100 years.

‘It gives us a really good snapshot of life in those times, what herbs and spices they had access to, what they were using daily, what people thought about illnesses then. 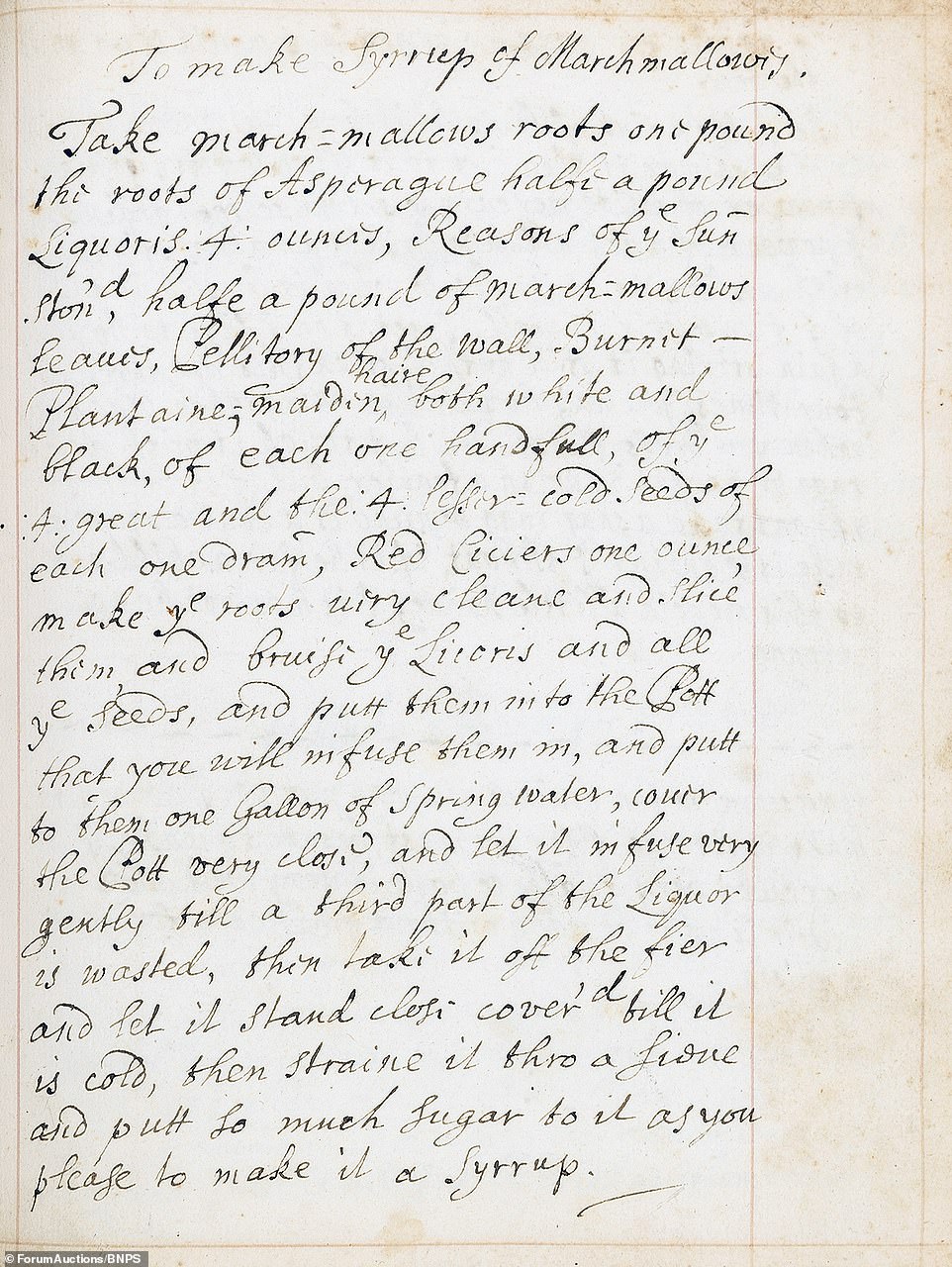 One of the more appealing recipes in the book is for marshmallows, pictured. The confectionery has been made since the times of the Ancient Egyptians who were believed to offer them as treats to royalty. Made from the mallow plant, they have also been used to treat coughs and sore throats throughout history. This recipe calls for them to be made using mallow roots and liquorice combined with water and sugar to create a syrup 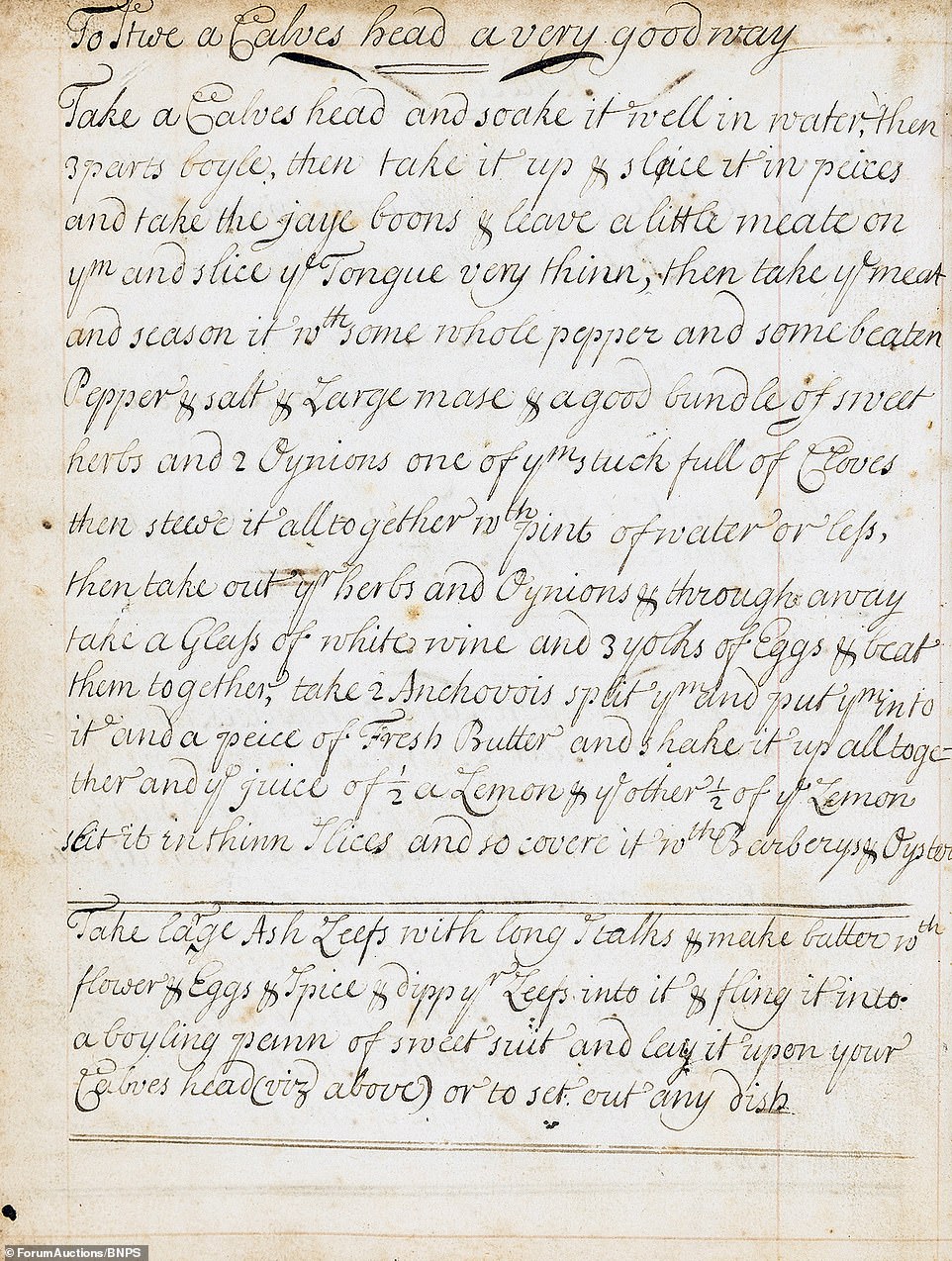 The most bizarre recipes in the book is how to stew a calve’s head ‘in a very good way’, pictured. The head should be soaked in water, chopped up, seasoned with pepper, herbs and onion and then mixed with wine and eggs. Oysters and anchovies are also suggested for the stew to add extra flavour

‘The book has come from within a family it has been with for years and has never been sold before.

‘It is in very good condition, probably one of the best ones we have had.

‘It’s in a very pretty binding – normally they are falling apart because they are so used in the kitchen.

‘This has never been sold before and I think a lot of collectors and institutions are really interested in this sort of period.’

The recipe book will be sold in London tomorrow.

Beyonce puts on a loved-up display with husband Jay-Z in Sardinia
I’d rather trust Bernie Madoff with my money than Alexandria Ocasio-Cortez
Labour unveil taxes on homeowners who have a garden and forces of sale of land on the cheap
Britney Spears forgets her troubles while yachting with boyfriend Sam Asghari in Miami
Warner Bros UK studios fire: Blaze where Harry Potter and James Bond were filmed
007 crews set up base on Scottish estate for Bond 25 shoot
Men who are on statins may have a reduced risk of developing lethal prostate cancer
Driver blocks in fire engine by leaving their car in front of station doors