French President rolled out the red carpet for Chinese leader Xi Jinping at a state visit that included the signing of a multi-billion euro deal between European aircraft maker Airbus to .

The French presidency said the China Aviation Supplies Holding Company has ordered 290 Airbus A320 and 10 Airbus A350 planes.

The amount of the deal was not specified. The global amount of the sale is estimated to 30 billion euros ($34 billion) at list prices, although buyers often secure discounts.

‘We are honored to support the growth of China’s civil aviation with our leading aircraft families,’ said Guillaume Faury, president of Airbus Commercial Aircraft. 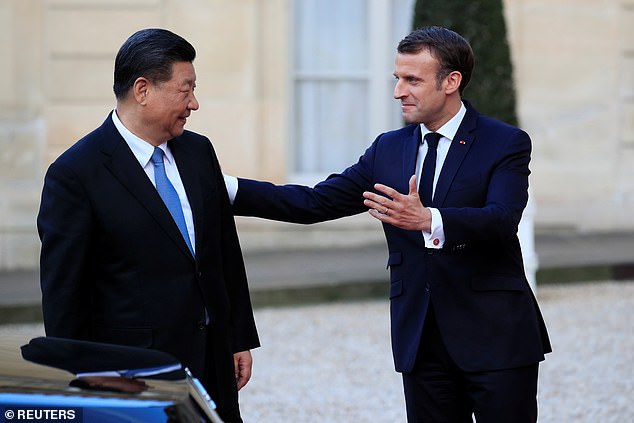 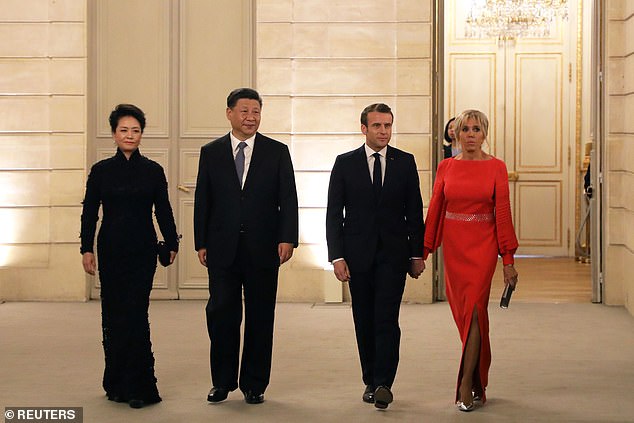 French President Emmanuel Macron, his wife Brigitte Macron, Chinese President Xi Jinping and his wife Peng Liyuan arrive to attend a state dinner for the Chinese president at the Elysee Palace in Paris 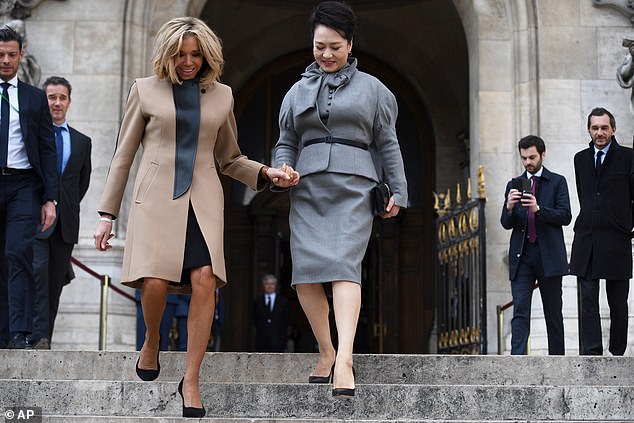 ‘Our expanding footprint in China demonstrates our lasting confidence in the Chinese market and our long-term commitment to China and our partners.’

Other major business deals on renewable energy and the food industry were signed Monday in the presence of Xi at the Elysee presidential palace in Paris, in addition to bilateral agreements.

Both countries agreed on a protocol allowing the French exports of chicken meat to China.

Earlier in the day, Macron welcomed Xi and his wife, Peng Liuan, at the Arc de Triomphe monument in Paris.

The French National Guard played the country’s anthems. Both leaders laid a wreath at the Unknown Soldier from World War I whose tomb is under the monument. 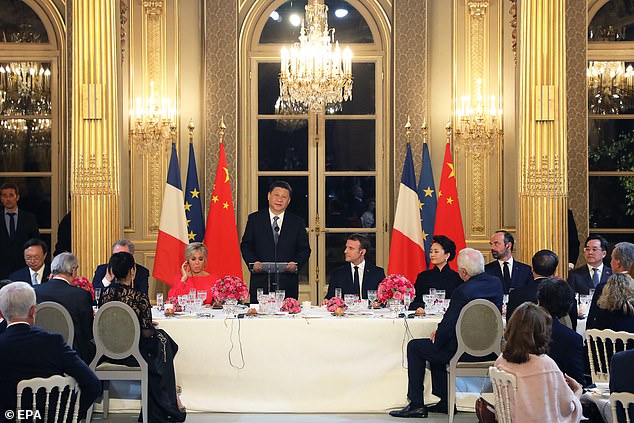 They then headed to the Elysee presidential palace for a meeting and a ceremony for the signing of agreements.

Later, the Chinese president was to be honored with a state dinner at the Elysee, with guests including French actor Alain Delon, Michelin-starred chef Alain Ducasse and French-Chinese painter Yan Pei-Ming and Chinese actress Gong Li.

Xi and Macron also confirmed the opening of a branch for the Paris modern art museum, the Pompidou Center, in Shanghai this fall.

The Chinese leader, who previously visited Italy and Monaco to sign deals, arrived in France on Sunday evening where he had a private dinner with Macron in the resort town of Beaulieu-sur-Mer on the French Riviera.

Europe wants to increase its trade with China but on European terms, especially amid U.S.-China trade tensions.

Inside Jasmine Yarbrough's hen night at $11,500-a-night hens party
Christmas shoppers told to avoid cheap electricals as they are often FAKE
Controversial TV Historian Mary Beard collects her damehood from Prince William
Labour accuses May of failing to offer 'real change or compromise' as Brexit negotiations stall
The 40 seats where Boris Johnson can win election including those that could fall to tactical voting
SEBASTIAN SHAKESPEARE: Amber Rudd's book is set to reveal no love lost with Boris Johnson
Social distancing CAN be done in schools, insists government minister Brandon Lewis
First white stork chicks born in Britain for 600 years peer out of their nest for first time