British travellers will no longer be allowed to use EU lanes at ports and airports if there is a No Deal , Brussels said yesterday.

Warning that ‘no deal’ was now ‘increasingly likely’, the European Commission issued an update saying that UK nationals would get their passports stamped when arriving and leaving the continent and would be subject to additional checks.

‘Border guards may ask you to provide information, for instance on the duration and purpose of your stay, as well as on your means of subsistence during your stay,’ it said. 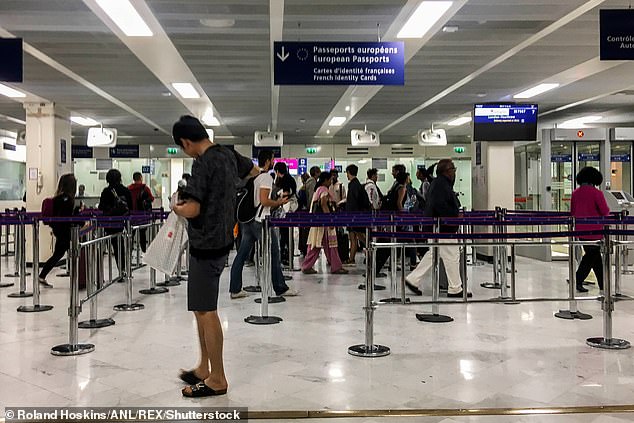 British travellers will no longer be allowed to use EU lanes at ports and airports if there is a No Deal Brexit, Brussels said yesterday. Pictured, stock image showing an EU passport lane in Paris

Officials confirmed that British citizens would be able to travel in the EU for up to 90 days without needing visas if the UK granted the same arrangement to Europeans.

‘Your passport will be stamped both when you enter the EU and when you leave it, so that this period of 90 days, which is visa-free, can be calculated,’ the Commission added.

As the UK will no longer be a member of the EU, British travellers will be entitled to a refund of VAT paid on goods purchased during stays on the continent ‘provided that the goods are presented to customs with the VAT refund documents when you leave’.

Brussels yesterday warned that a No Deal Brexit is becoming ‘increasingly likely’.

The European Commission said it had ‘completed’ its preparations for the possibility of the country leaving the EU without a deal on April 12.

But it warned that it would nonetheless cause ‘significant disruption for citizens and businesses’.

If the UK leaves without a deal there will be no transition period, meaning that goods being exported to the EU are immediately subject to checks and tariffs. The Commission said ‘significant delays’ would be expected at the borders.

It said member states ‘have made considerable preparations at ports and airports’ to ensure the extra checks for passengers ‘are done as efficiently as possible, but they may nevertheless cause delays’.