Democrat Kirsten Gillibrand branded a ‘coward’ on Sunday as she formally launched her presidential bid at a rally outside of his hotel.

Gillibrand presented herself as a ‘brave’ alternative to the Republican president, who she blasted as braggadocios in remarks that followed an introduction by and a hug from her longtime friend Connie Britton, of ‘Nashville’ and ‘Friday Night Lights’ fame.

She also took a jab at fellow senators seeking the presidency, saying that she has stood up to Trump more than anybody else in the U.S. Senate.

‘President Trump is tearing apart the fabric of this country. He puts his name in bold on every building,’ she said. ‘He does this because he wants you to believe he is strong. He is not. Our president is a coward.’ 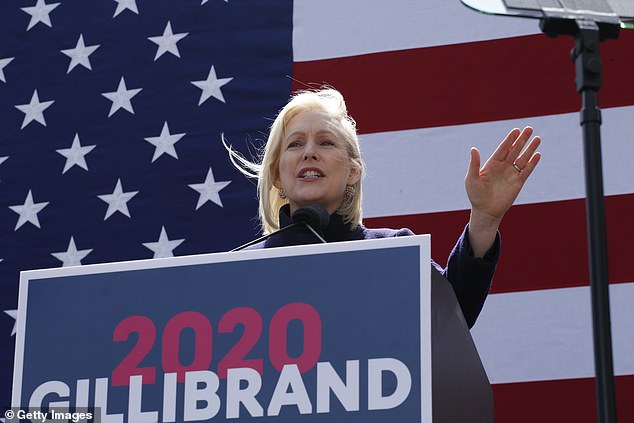 Speaking from Trump International Hotel & Tower near Central Park, Gillibrand told attendees, ‘Look up at that tower, a shrine to greed division and vanity. Now, look around you, the greater strength by far is ours.’

Gillibrand’s campaign unveiled ‘bravery’ as the theme of her 2020 in the lead-up to the speech.

She tore into Trump for his border wall proposal and proclaimed that ‘racism and fear’ and ‘banning Muslims’ are not national security strategies.

‘The Mueller report must be made public. All of it. Nobody in this country, not even the president is above the law or immune from accountability,’ she said.

Gillibrand said she would implement a national paid family leave policy and the Green New Deal, saying America does not ‘have time to waste’ when it comes to the climate.

She took the stage after sexual assault survivors, Dreamers and Britton, who she roomed with one summer in college as part of a study abroad program in China.

‘It’s pretty unusual to you know like know the person. and I find myself in the rare position of actually knowing the person :my friend who is running for president. that’s so crazy right?’

She added: ‘It really isn’t, if you know her like I know her.

‘I could have seen that it was obvious that this could, that this should happen, that Kirsten always had what it would take to be president,’ she said. ‘Though as young women, we would never have allowed ourselves to dream that.’ 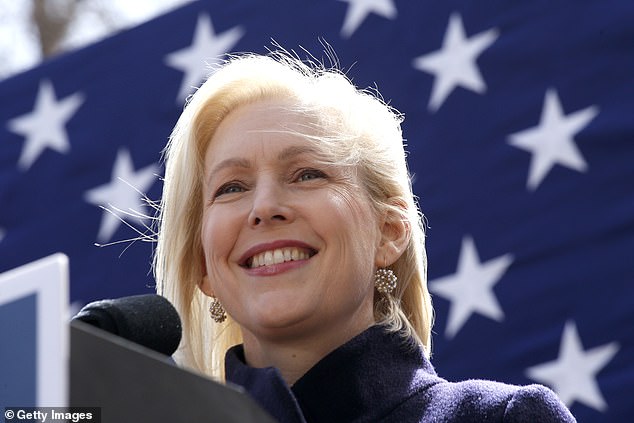 Gillibrand presented herself as a ‘brave’ alternative to the Republican president, who she blasted by name as braggadocios 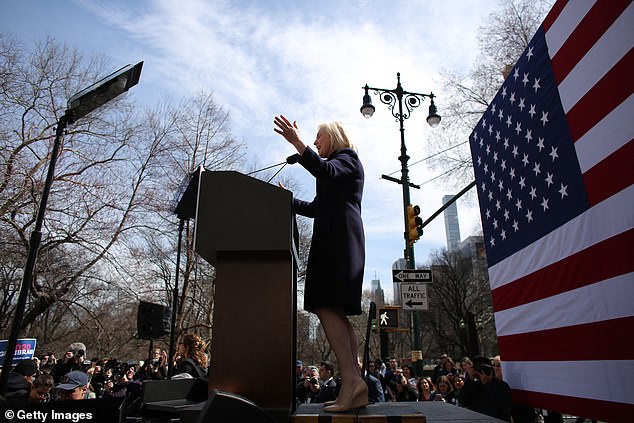 Speaking from Trump International hotel near Central Park, Gillibrand directed attendees, ‘Look up at that Tower, a shrine to greed division and vanity. Now, look around you, the greater strength by far is ours’

Britton claimed ‘our country is in a storm right now,’ and Gillibrand can lead America out.

‘She cannot be knocked down, guys. Not in front of Trump Plaza, or anywhere else’ said Britton of her longtime friend.

The actress’ introduction of the New York senator followed a string of endorsements from women Gillibrand had worked with over the years.

‘My fight is your fight. Your fight is my fight. And our fight is her fight,’ said Lisdy Contreras-Giron, an immigration activist and Dreamer. ‘Together we’re stronger together and together we will rise.’

‘Hate blindsided us to make us think that “make America great again” was putting personal agendas before the people,’ she said. ‘Hate will not win … Hate will be defeated. Brave will win. Families belong together.’

End Rape On Campus co-founder Annie Clark opened up about her sexual assault while she was a student at the University of North Carolina.

She recalled how Gillibrand, who she would go on to work with on a campus sexual assault prevention bill, invited her and other students who showed at at the senator’s office into her home and made them dinner.

‘It’s brave to stand up to your own political party when there are instances of racism and sexism there,’ she said of Gillibrand.

Activist Jackie Rowe-Adams, encouraged attendees to ‘stop being scared’ and use their voices.

For ‘so many years have’ men have sat at the table ‘and they removed us from the table,’ she charged. 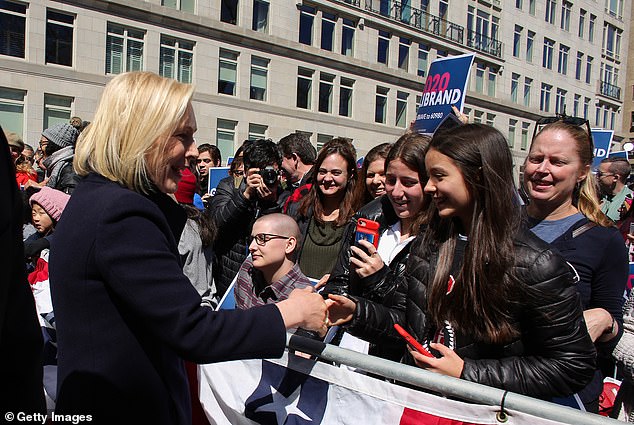 ‘But it’s over now,’ she claimed. ‘And No. 45 – we coming after you. We got a lady, we got a lady that’s gonna deal with all the issues of the world. So get ready, cause here we come. So let me say this: ain’t no stopping us now, because we are on the move. ‘

Tanya Asapansa-Johnson Walker also took aim at Trump saying, ‘I’m a proud black transgender woman, and I know 45 hates women. As soon as identified as a woman, it was like a step down in society. As soon as I identified as transgender, I’ve been targeted by the Trump administration.’

She said she was an honorably discharged veteran.

‘I served my country. People who did not serve our country should not have the right say who can join our military,’ stated.