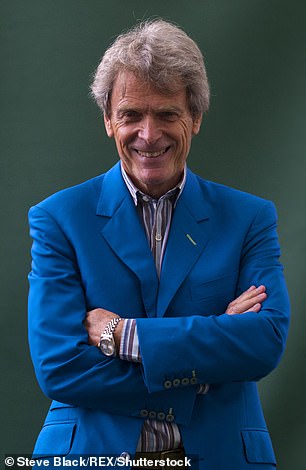 John Hegarty, advertising Guru. Häagen-Dazs, Boddingtons and Levi have all been energised by this man’s vision

One of Britain’s most influential advertising gurus has called for internet giants to be broken up, accusing them of ‘sucking money out’ of the economy and damaging business and society.

In a withering attack, Sir John Hegarty – the man behind the famous 1980s Levi’s laundrette advert and Audi’s ‘Vorsprung durch Technik’ slogan – said companies such as and must be regulated more strictly because they have ‘turned into monopolies’ and are not putting enough back into the economy.

Google and Facebook have become so powerful that experts believe they account for as much as 90 per cent of all new digital advertising spending in the UK.

Sir John, a legend in the advertising industry who helped set up giants Saatchi & Saatchi and Bartle Bogle Hegarty, believes it is inevitable the Silicon Valley firms will be broken up. ‘They’re sucking money out [of the economy], not paying tax on it, and destroying what they’ve left behind,’ he told The Mail on Sunday.

‘All corporations will want to monopolise. It’s in their nature. They’ll grow as fast and as big as they can, exclude competition, dominate the market, keep it where it is.’ But he believes there will be a break-up, with the possibility of Facebook being forced to sell Instagram.

His criticism follows the release of a damning review into digital competition for the Government by Jason Furman, a former adviser to Barack Obama.

Mr Furman called on the UK to lead a global crackdown on the tech giants’ dominance and accused the firms of ‘bullying tactics’. He said the Competition and Markets Authority should be given powers to block takeovers of smaller rivals.

The report said the US tech giants had swallowed up 400 smaller firms over the past decade, highlighting Facebook’s takeovers of Instagram and messaging service WhatsApp, as well as Microsoft’s deal to buy LinkedIn, the social media platform aimed at professionals.

Last week, Google was fined €1.5 billion by the European Commission for stifling competition in online advertising. But Sir John said: ‘Google are making nearly $9 billion [profit] a quarter so when you fine them €1.5 billion, it’s like taking somebody out for lunch.’

The Latest: Nevada top doctor has no US medical license
Domestic violence campaigners accuse BBC of 'gaslighting' Sean Walsh's ex girlfriend
The nativity scene so tiny it can fit inside the eye of a needle and is only visible by microscope
SECOND England player in 'cocaine shame'
Put up a statue to Del Boy outside the tower he made his home, says Boycie
Hunt and Javid sound alarm over Huawei deal and signal potential u-turn
Flight attendants reveal their weirdest experiences on board - including a woman who practiced yoga
Coronavirus UK: Sadiq Khan accused of putting lives at risk