Special Counsel Robert Mueller’s investigation into ‘s role in the 2016 U.S. election has ensnared dozens of people, including several advisers to President and a series of Russian nationals and companies.

Rod Rosenstein, the No. 2 U.S. Justice Department official, in May 2017 appointed Mueller to look into Russian interference, whether members of Trump’s campaign coordinated with Moscow officials and whether the Republican president has unlawfully sought to obstruct the probe.

Russia denies election interference. Mueller has handed in a report on his investigation, the Department of Justice said on Friday.

The following are those who have pleaded guilty or have been indicted in Mueller’s inquiry. 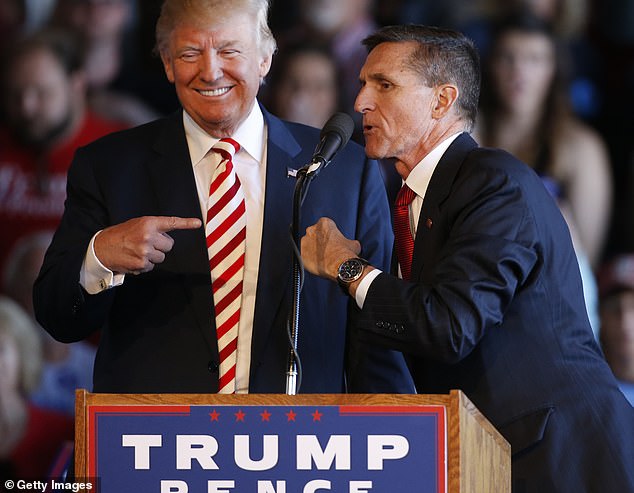 Trump (L) jokes with retired Gen. Michael Flynn as they speak at a rally at Grand Junction Regional Airport on October 18, 2016 in Grand Junction Colorado

Flynn was President Trump’s former National Security Advisor and Robert Mueller’s most senior scalp to date. He previously served when he was a three star general as President Obama’s director of the Defense Intelligence Agency but was fired. 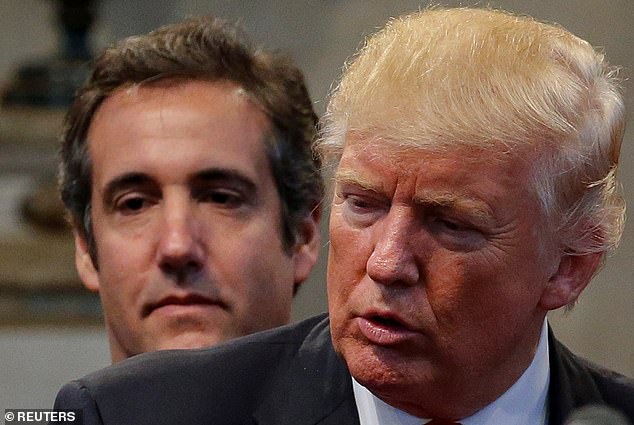 Trump’s personal attorney Michael Cohen stands behind Trump as a group of supporters lay hands on Trump in prayer during a campaign stop at the New Spirit Revival Center church in Cleveland Heights, Ohio, September 21, 2016

Pleaded guilty to eight counts including fraud and two campaign finance violations in August 2018. Pleaded guilty to further count of lying to Congress in November 2018. Sentenced to three years in prison and $2 million in fines and forfeitures in December 2018.

He also admitted tax fraud by lying about his income from loans he made, money from taxi medallions he owned, and other sources of income, at a cost to the Treasury of $1.3 million.

And he admitted lying to Congress in a rare use of the offense. The judge in his case let him report for prison on March 6 and recommended he serve it in a medium-security facility close to New York City. 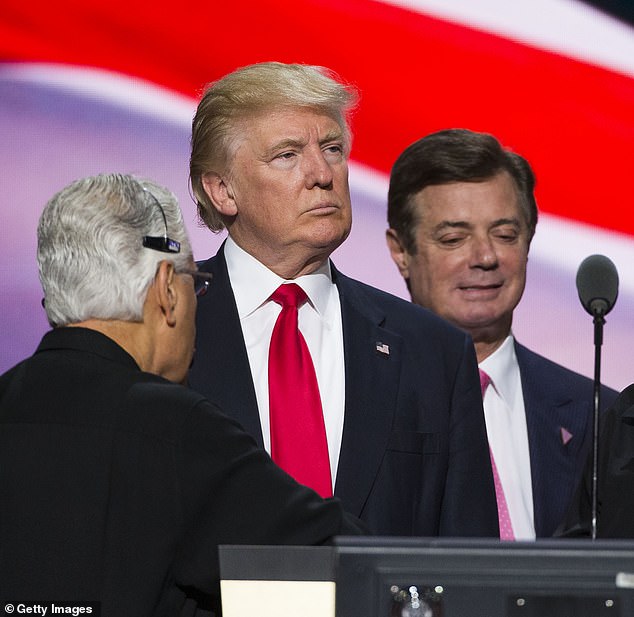 Trump with campaign chairman Paul Manafort at the Quicken Loans Arena in Cleveland, Ohio, in 2016

Found guilty of eight charges of bank and tax fraud in August 2018. Sentenced to 47 months in March 2019. Pleaded guilty to two further charges – witness tampering and conspiracy against the United States. Jailed for total of seven and a half years in two separate sentences. Additionally indicted for mortgage fraud by Manhattan District Attorney, using evidence previously presented by Mueller.

Manafort worked for Trump’s campaign from March 2016 and chaired it from June to August 2016, overseeing Trump being adopted as Republican candidate at the Republican National Convention in Cleveland. He is the most senior campaign official to be implicated by Mueller. Manafort was one of Washington D.C.’s longest-term and most influential lobbyists but in 2015, his money dried up and the next year he turned to Trump for help, offering to be his campaign chairman for free – in the hope of making more money afterwards. But Mueller unwound his previous finances and discovered years of tax and bank fraud as he coined in cash from pro-Russia political parties and oligarchs in Ukraine.

Manafort pleaded not guilty to 18 charges of tax and bank fraud but was convicted of eight counts in August 2018. The jury was deadlocked on the other 10 charges. A second trial on charges of failing to register as a foreign agent due in September did not happen when he pleaded guilty to conspiracy against the United States and witness tampering in a plea bargain. He was supposed to co-operate with Mueller but failed to.

Minutes after his second sentencing hearing in March 2019, he was indicted on 16 counts of fraud and conspiracy by the Manhattan District Attorney Cyrus Vance Jr., using evidence which included documents previously presented at his first federal trial. The president has no pardon power over charges by district and state attorneys. 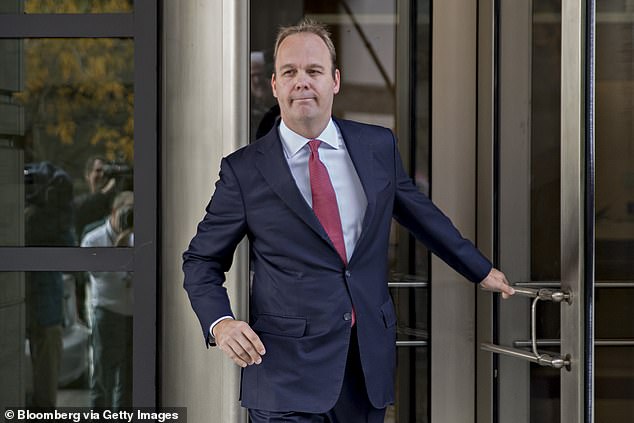 Rick Gates, former deputy campaign manager for Donald Trump, walks out of the U.S. Courthouse after a bond hearing in Washington, D.C., on Monday, November 6, 2017

Pleaded guilty to conspiracy against the United States and making false statements in February 2018. Awaiting sentence.

Gates was Manafort’s former deputy at political consulting firm DMP International. He admitted to conspiring to defraud the U.S. government on financial activity, and to lying to investigators about a meeting Manafort had with a member of congress in 2013. As a result of his guilty plea and promise of cooperation, prosecutors vacated charges against Gates on bank fraud, bank fraud conspiracy, failure to disclose foreign bank accounts, filing false tax returns, helping prepare false tax filings, and falsely amending tax returns. 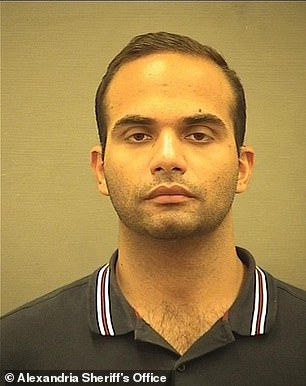 He admitted to lying to special counsel investigators about his contacts with London professor Josef Mifsud and Ivan Timofeev, the director of a Russian government-funded think tank.

He has agreed to cooperate with the special counsel investigation. 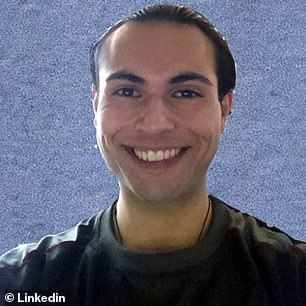 Pinedo is a 28-year-old computer specialist from Santa Paula, California

Pleaded guilty to identity fraud in February 2018. Sentenced to a year in prison

Pinedo is a 28-year-old computer specialist from Santa Paula, California. He admitted to selling bank account numbers to Russian nationals over the internet that he had obtained using stolen identities.

He has agreed to cooperate with the special counsel investigation.

Van der Zwaan was a Dutch attorney for Skadden Arps who worked on a Ukrainian political analysis report for Paul Manafort in 2012.

He admitted to lying to special counsel investigators about when he last spoke with Rick Gates and Konstantin Kilimnik. His law firm say he was fired. 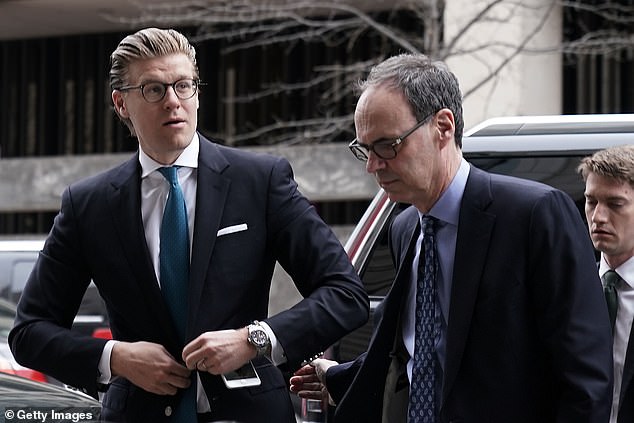 Pleaded guilty in August 2018 to failing to register as a lobbyist while doing work for a Ukrainian political party. Awaiting sentence

Patten, a long-time D.C. lobbyist was a business partner of Paul Manafort. He pleaded guilty to admitting to arranging an illegal $50,000 donation to Trump’s inauguration.

He arranged for an American ‘straw donor’ to pay $50,000 to the inaugural committee, knowing that it was actually for a Ukrainian businessman.

Neither the American or the Ukrainian have been named. 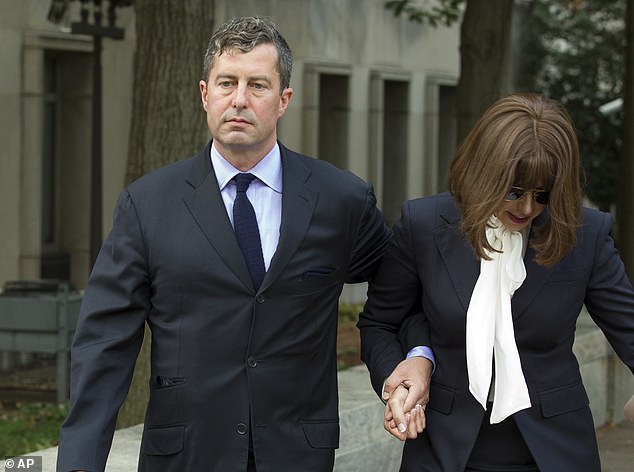 Patten (left), a long-time D.C. lobbyist was a business partner of Paul Manafort. He pleaded guilty to admitting to arranging an illegal $50,000 donation to Trump’s inauguration

Indicted for obstruction of justice and conspiracy to obstruct justice. At large, probably in Russia.

Kilimnik is a former employee of Manafort’s political consulting firm and helped him with lobbying work in Ukraine. He is accused of witness tampering, after he allegedly contacted individuals who had worked with Manafort to remind them that Manafort only performed lobbying work for them outside of the U.S.

He has been linked to Russian intelligence and is currently thought to be in Russia – effectively beyond the reach of extradition by Mueller’s team. 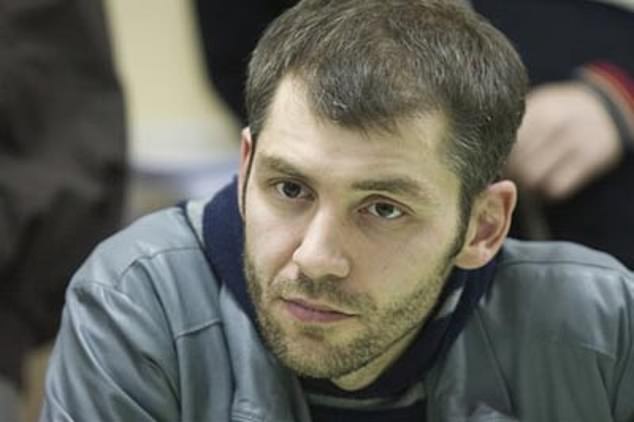 Twenty-five Russian nationals and three Russian entities have been indicted for conspiracy to defraud the United States. They remain at large in Russia.

Vladimir Putin has ridiculed the charges. Russia effectively bars extradition of its nationals. The only prospect Mueller has of bringing any in front of a U.S. jury is if Interpol has their names on an international stop list – which is not made public – and they set foot in a territory which extradites to the U.S. 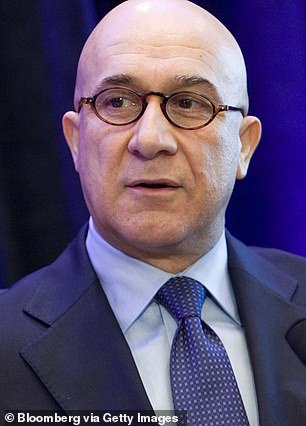 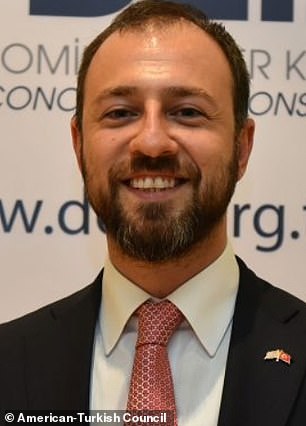 Kian, an Iranian-American was arrested and appeared in court charged with a conspiracy to illegally lobby the U.S government without registering as a foreign agent. Their co-conspirator was Flynn, who is called ‘Person A’ in the indictment and is not charged, offering some insight into what charges he escaped with his plea deal.

Kian, vice-president of Flynn’s former lobbying firm, is alleged to have plotted with Alptekin to try to change U.S. policy on an exiled Turkish cleric, Fethullah Gulen, who lives in Pennsylvania and who is accused by Turkey’s strongman president Recep Tayyip Erdogan, of trying to depose him.

Erdogan’s government wanted him extradited from the U.S. and paid Flynn’s firm through Alptekin for lobbying, including an op-ed in The Hill calling for Gulen to be ejected. Flynn and Kian both lied that the op-ed was not paid for by the Turkish government.

The indictment is a sign of how Mueller is taking an interest in more than just Russian involvement in the 2016 election. 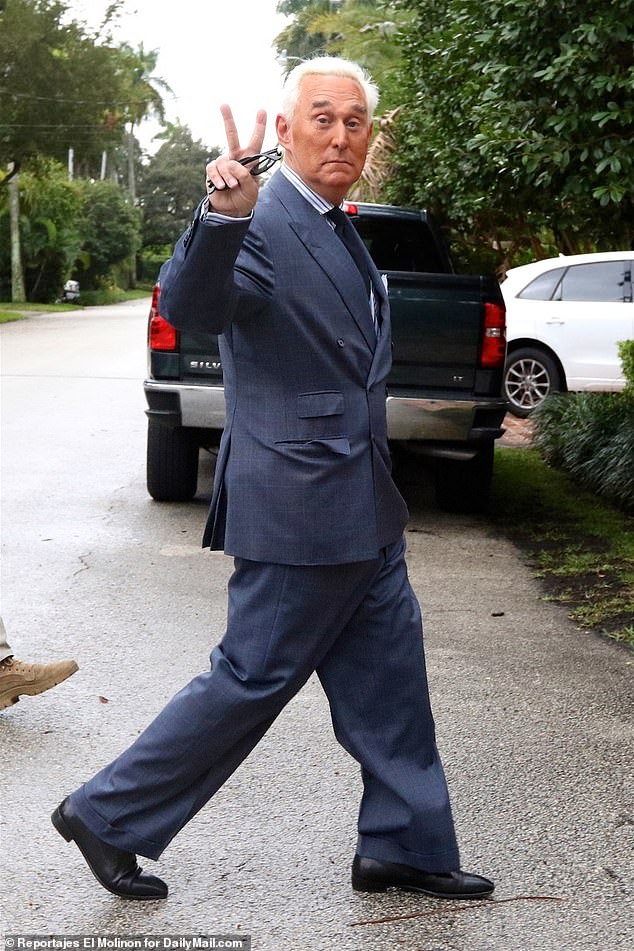 Roger Stone, a former Trump campaign official and longtime informal advisor to Trump, was indited on seven counts including obstruction of justice, witness tampering, and lying to Congress about his communications with WikiLeaks in January 2019

Roger Stone, a former Trump campaign official and longtime informal advisor to Trump, was indited on seven counts including obstruction of justice, witness tampering, and lying to Congress about his communications with WikiLeaks in January 2019. Awaiting trial.

Stone was a person of interest to Mueller’s investigators long before his January indictment, thanks in part due to his public pronouncements as well as internal emails about his contacts with WikiLeks.

In campaign texts and emails, many of which had already been publicly revealed before showing up in Mueller’s indictment, Stone communicated with associates about WikiLeaks following reports the organization had obtained a cache of Clinton-related emails.

Stone, a former Nixon campaign adviser who has the disgraced former president’s face permanently tattooed on his back, has long been portrayed as a central figure in the election interference scandal, but as recently as January 4 told Dailymail.com that he doesn’t expect to be indicted.

‘They got nothing,’ he said of the special counsel’s investigation.

According to the federal indictment, Stone gave ‘false and misleading’ testimony about his requests for information from WikiLeaks. He then pressured a witness, comedian Randy Credico, to take the Fifth Amendment rather than testify, and pressured him in a series of emails. Following a prolonged dispute over testimony, he called him a ‘rat’ and threatened to ‘take that dog away from you’, in reference to Credico’s pet, Bianca. Stone warned him: ‘Let’s get it on. Prepare to die.’