President has departed Mar-a-Lago for his golf course on Saturday morning, appearing carefree but remaining silent on after special counsel Robert Mueller filed his final report.

Trump’s motorcade arrived at Trump International Golf Club in West Palm Beach, shortly after 9am on Saturday, with sunny skies above and a forecast high of 77 degrees.

En route, he was spotted perusing a newspaper, and wearing reading glasses, a red ‘USA’ hat and white polo shirt. There was no word on any planned golf partners for the day.

On Friday, a senior Justice Department official said that Mueller will file no more indictments with federal courts, meaning the president, his inner circle of present and former confidants and his family members are out of immediate legal jeopardy. 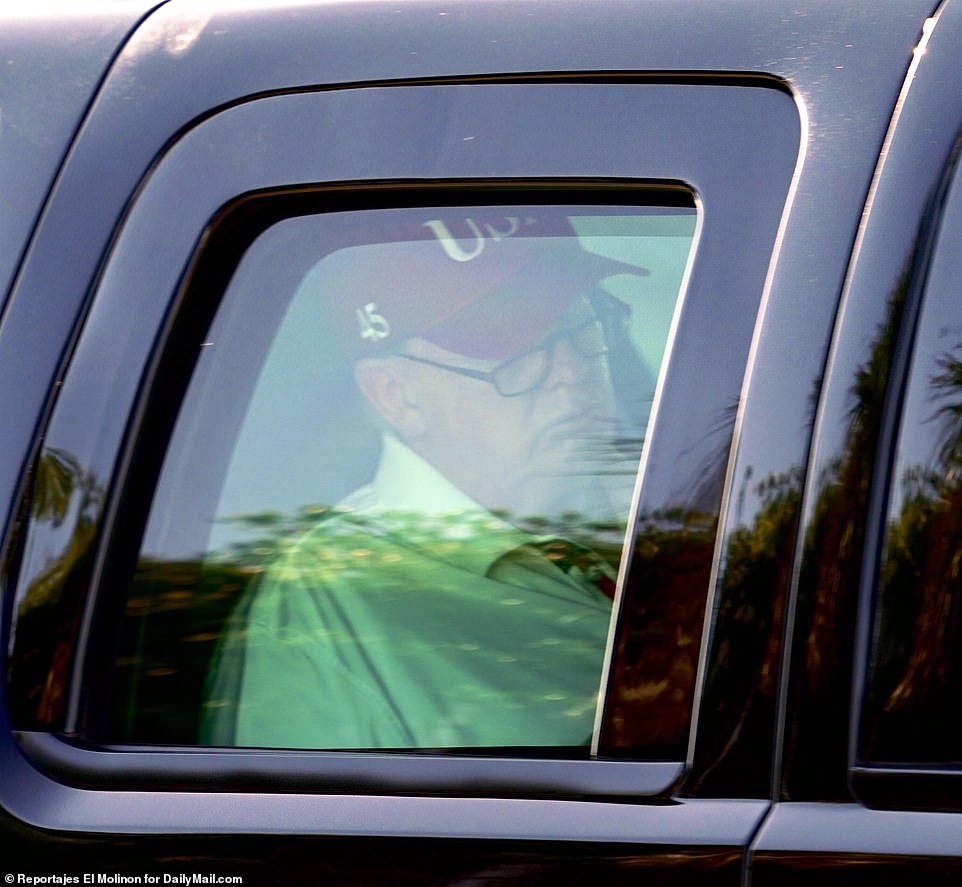 Trump is spotted publicly for the first time since word of Mueller’s report broke, appearing carefree as his motorcade rolled from Mar-a-lago to Trump International Golf Club in West Palm Beach, Florida on Saturday morning 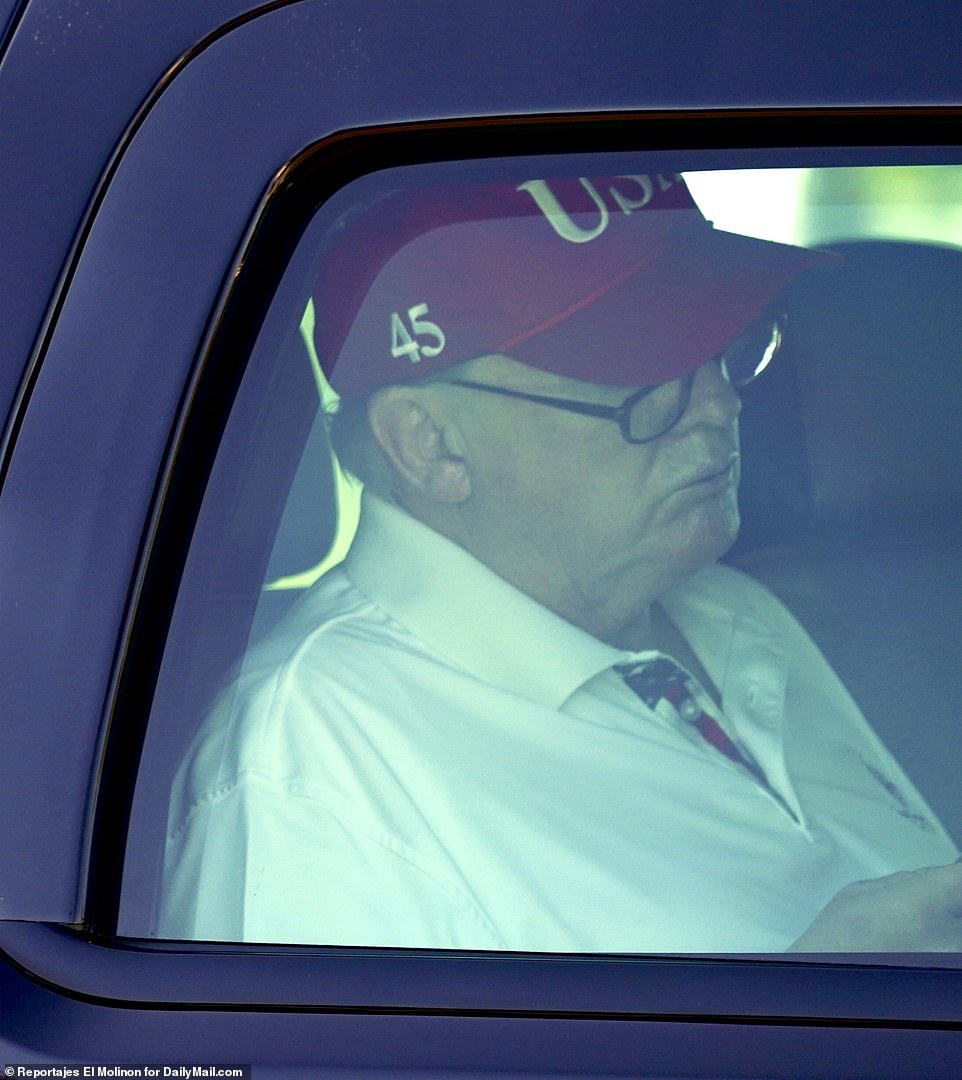 Trump was seen perusing a newspaper, and wearing reading glasses, a red ‘USA’ hat and white polo shirt. There was no word on any planned golf partners for the day, though the weather forecast was ideal at 77 and sunny 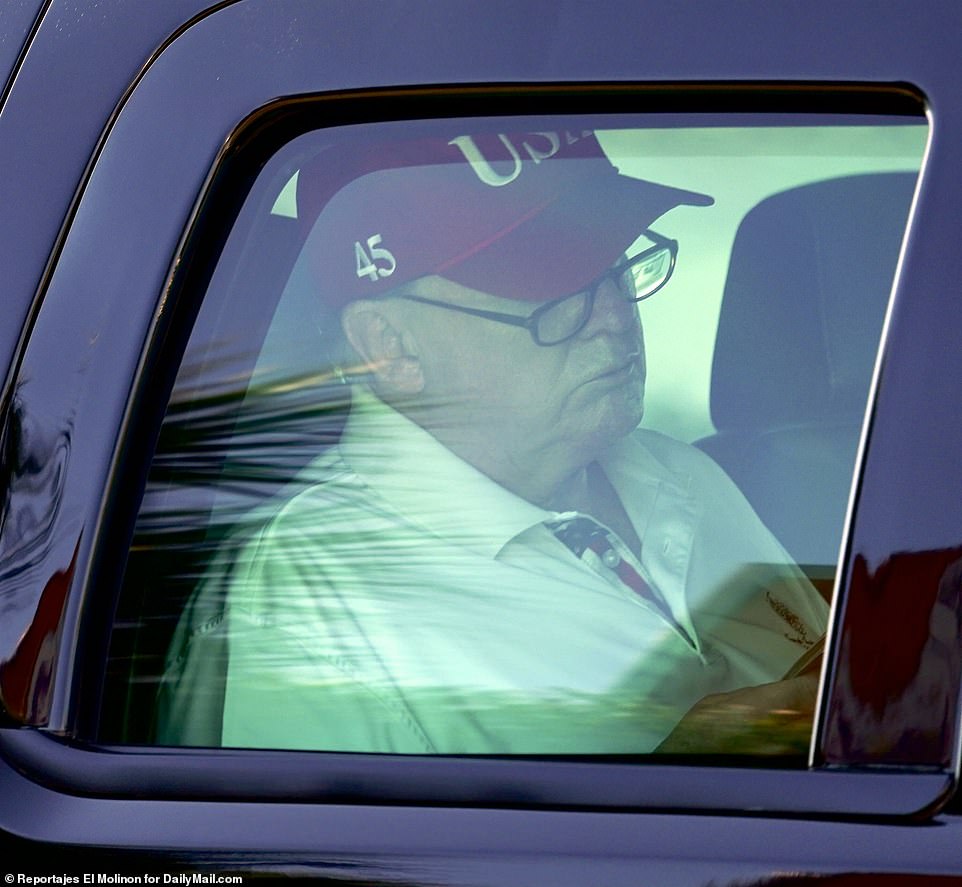 The president has remained uncharacteristically silent in the wake of the news, not tweeting once since word broke that Mueller had concluded his probe 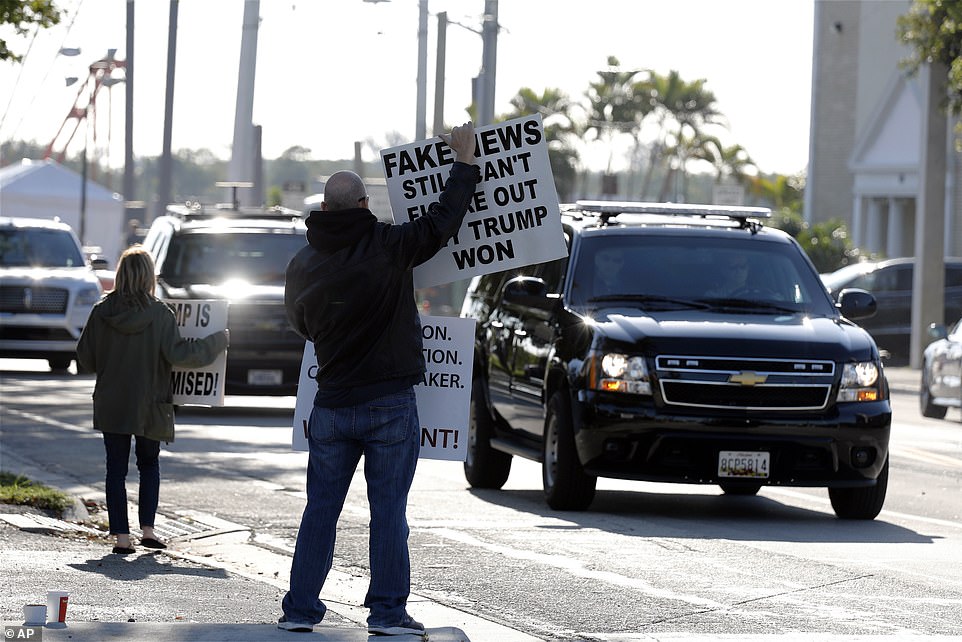 Trump had already arrived at his Florida retreat on Friday afternoon when Attorney General William Barr revealed that he had received the report.

The White House has not received a copy of the report or been briefed on it, according to Press Secretary Sarah Sanders.

‘The next steps are up to Attorney General Barr, and we look forward to the process taking its course,’ Sanders said in a statement.

Barr is expected to brief Congress on the key findings of the report as early as this weekend.

The president has remained uncharacteristically silent in the wake of the news, not tweeting once since word broke that Mueller had concluded his probe.

His silence has led some Trump critics to suspect that Mueller has uncovered incriminating information, but Trump’s supporters insist that the lack of new indictments is vindication for the president.

Trump’s motorcade on Saturday morning was the first public sighting of the president since word of the Mueller report broke.

On Friday afternoon, a few hours prior to the news, he appeared relaxed and smiling alongside First Lady Melania during a a photo opportunity with Caribbean leaders before a working meeting at Mar-a-lago. 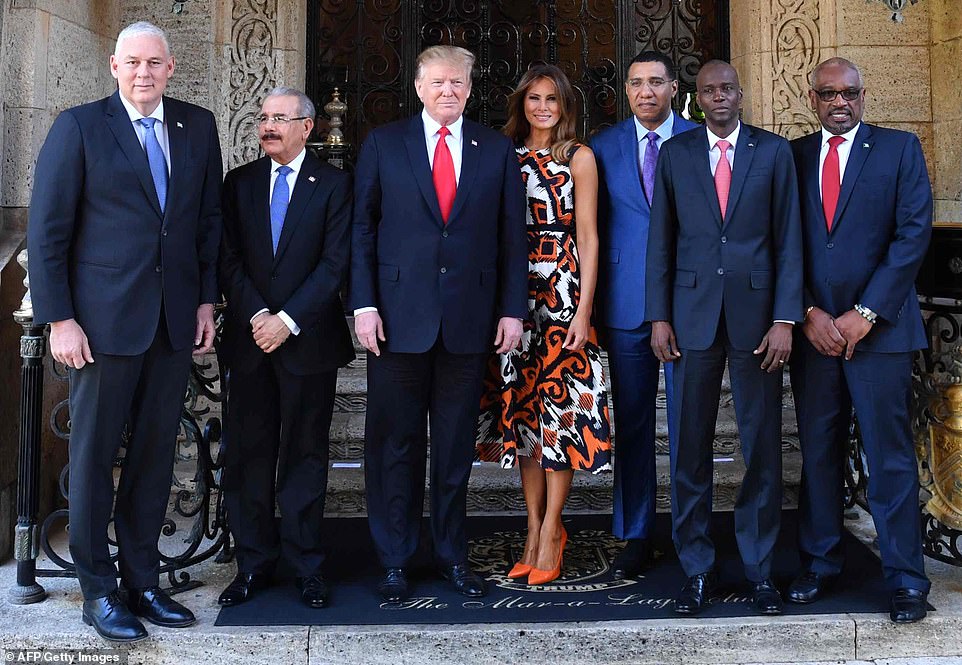 Melania and Donald Trump hosted Caribbean leaders at Mar-a-Lago, Florida on Friday, hours before word of the report 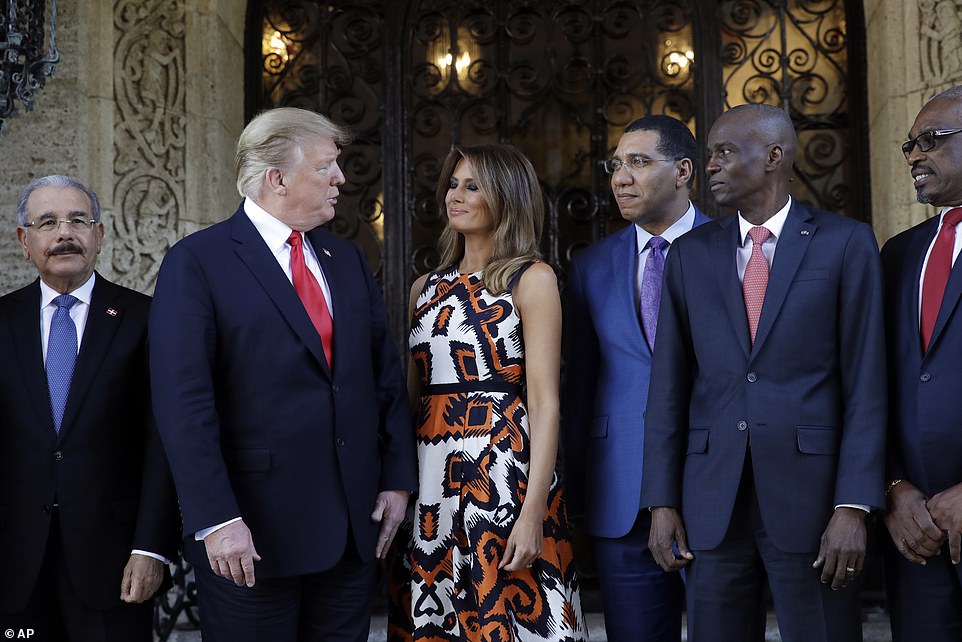 The cinched-in-at-the-waist ‘Andrea’ round-neck occasion dress is currently on sale for $282.50, down from $565. Melania paired the midi-length half price frock with Christian Louboutin heels.

Trump has no public events scheduled until he departs Mar-a-Lago to return to the White House on Sunday afternoon.

As the president relaxes in Florida, news of Mueller’s report has lit DC on fire, with political partisans from both sides trying to spin developments in their favor amid the gap in information about what the report contains.

The next step is up to Barr, who is charged with writing his own account of Mueller’s findings and sending it to Congress. In a letter to lawmakers, he declared he was committed to transparency and speed. He said he could provide details as soon as this weekend.

With no details released at this point, it’s not known whether Mueller’s report answers the core questions of his investigation: Did Trump’s campaign collude with the Kremlin to sway the 2016 presidential election in favor of the celebrity businessman? Also, did Trump take steps later, including by firing his FBI director, to obstruct the probe?

But the delivery of the report does mean the investigation has concluded without any public charges of a criminal conspiracy between the campaign and Russia, or of obstruction by the president. A Justice Department official confirmed that Mueller was not recommending any further indictments.

That person, who described the document as ‘comprehensive,’ was not authorized to discuss the probe and asked for anonymity. 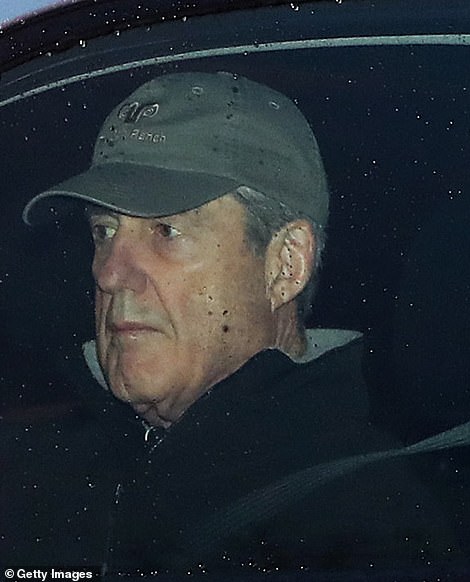 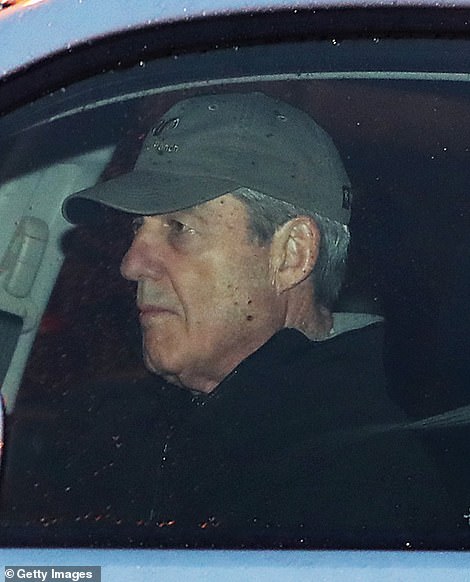 The Robert Mueller-led probe was over Friday. Mueller is pictured arriving at his Washington DC office Thursday night 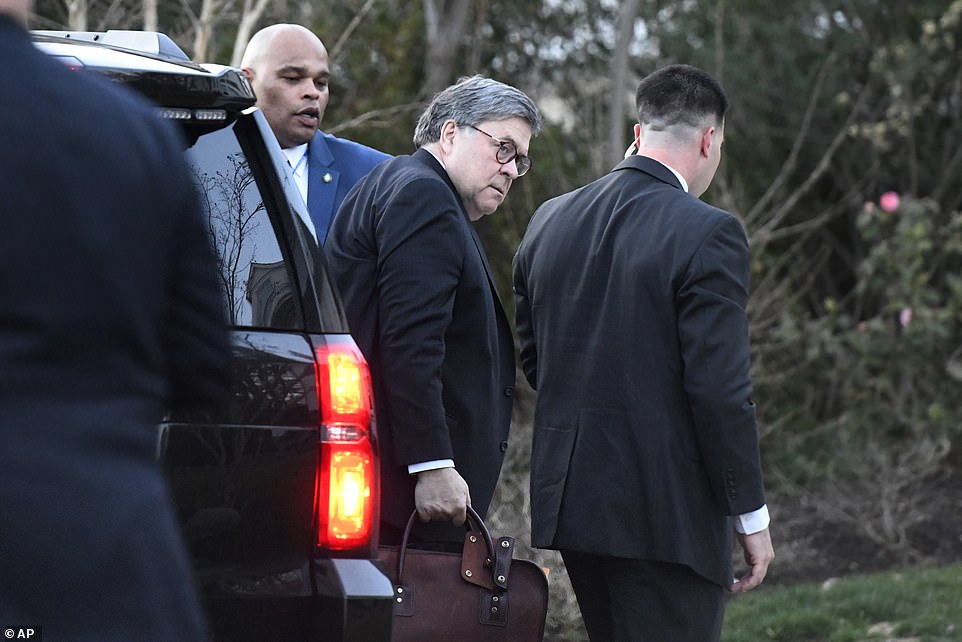 That’s good news for a handful of Trump associates and family members dogged by speculation of possible wrongdoing.

They include Donald Trump Jr., who had a role in arranging a Trump Tower meeting at the height of the 2016 election campaign with a Kremlin-linked lawyer, and Trump’s son-in-law, Jared Kushner, who was interviewed at least twice by Mueller’s prosecutors.

It wasn’t immediately clear whether Mueller might have referred additional investigations to the Justice Department.

Twenty-five Russians were indicted on charges related to election interference, accused either of hacking Democratic email accounts during the campaign or of orchestrating a social media campaign that spread disinformation on the internet.

Five Trump aides pleaded guilty and agreed to cooperate with Mueller and a sixth, longtime confidant Roger Stone, is awaiting trial on charges that he lied to Congress and engaged in witness tampering.

It’s unclear what steps Mueller might take if he uncovered what he believes to be criminal wrongdoing by Trump, in light of Justice Department legal opinions that have held that sitting presidents may not be indicted.

Boris Johnson looks set to split his £6.5million fortune with Marina
Olivia Buckland insists 'hurtful' former friend Cara De La Hoyde was the reason for their fall-out
Tyndall Air Force Base was devastated by Hurricane Michael
Teenager accused of 'water-board' attack is 'a Britain First supporter'
Friends of Ted Bundy's final victim remember the school girl, 12, who was last of his 30 victims
Two Britons are killed and one seriously injured in Malia car crash
European heatwave heads north with 95F temperatures in Sweden
You knew the Tory earthquake was off the Richter Scale when Tony Blair's seat went blue