A Boeing 737 MAX 8 being built for Oman Air took off from Renton, Washington and taxied past a Boeing hanger after landing in Seattle Friday, amid the air ban of the plane model.

Last week the US was the only nation to have not grounded the jets after a second plane crash in five months, this time in Ethiopia.

But President finally announced MAX flights would be grounded pending investigation into the similarities between that incident and one in last year, and now the planes are being tested on the West Coast. 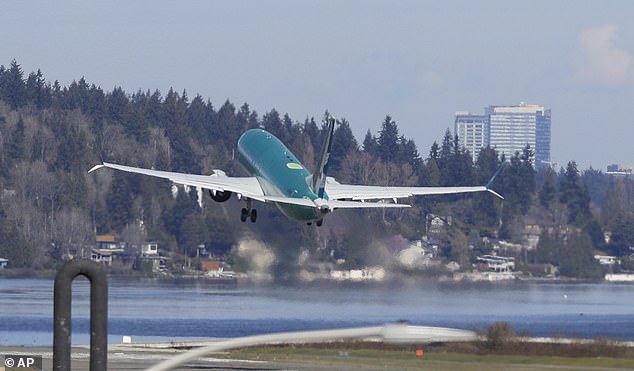 A Boeing 737 MAX 8 being built for Oman Air takes off from Renton Municipal Airport, Friday 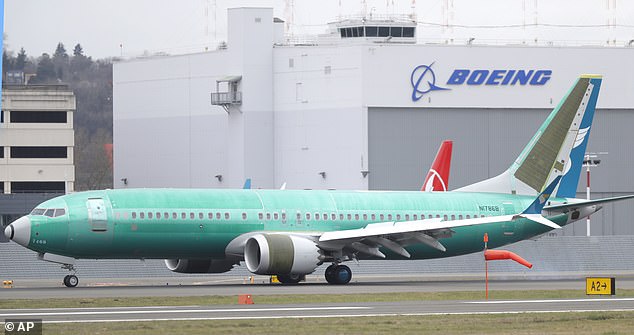 A Boeing 737 MAX 8 being built for Oman Air taxis past a Boeing hanger after landing at Boeing Field, Friday

Images showed the aircraft soaring into the sky at Renton Municipal Airport and landing at Boeing Field.

Oman Air operated five of the aircraft before the Ethiopia Airlines crash. It announced the arrival of its fleet last January when it said it ordered 30 of the model.

But the sultanate’s carrier said in a tweet earlier this month about their actions following the Addis Ababa crash that killed 157 people and the Lion Air crash that took the lives of 189: ‘Oman Air’s primary and overriding consideration is the safety and well-being of its staff and guests.’

As Oman Air planes tested out the 737 MAX 8s, Boeing said it is ‘still building airplanes’ and delivering the older 737 NG models.

A new automatic flight control system could be behind the planes nosediving to their dooms in October 2018 and March this year. 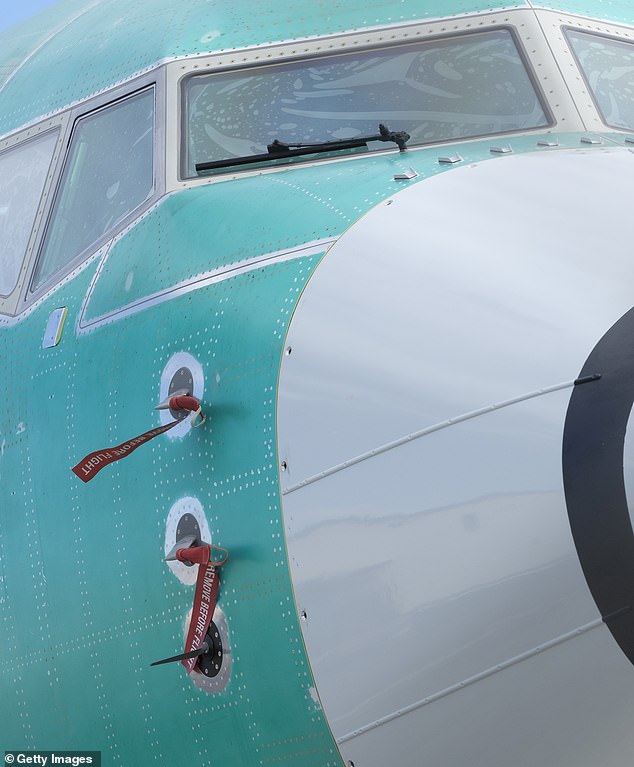 One of two sensors that measures the angle of attack is pictured at bottom on a Boeing 737 MAX 8 airplane outside the company’s factory on March 22, 2019 in Renton, Washington 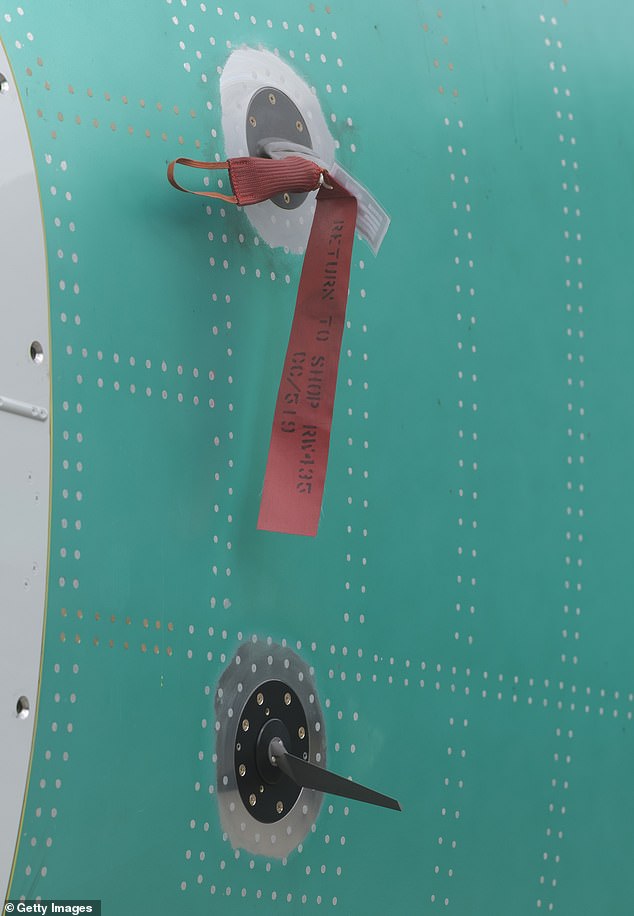 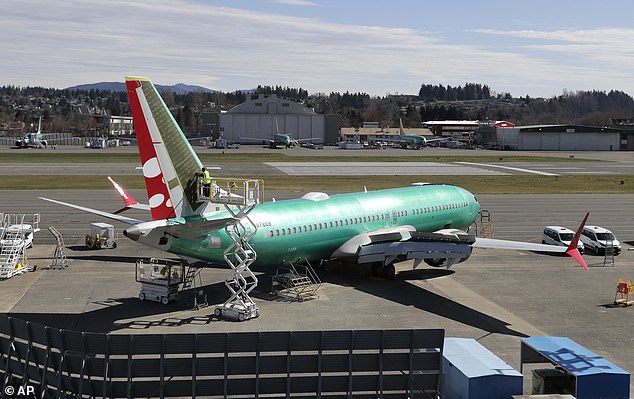 A worker on a lift works on a Boeing 737 Max 8 being built for SpiceJet at Renton Municipal Airport, Friday

Boeing plans to have a solution for the MCAs in April but the Federal Aviation Administration has allowed the jets to be from Renton to Boeing Field, Moses Lake or other locations to be stored while waiting for delivery or flight approval.

American Airlines pilots are to test Boeing Co’s 737 MAX software fix on simulators this weekend, the pilots’ union told Reuters on Thursday, a key step in restoring confidence in the jet after two fatal crashes.

American is the second-largest U.S. operator of the MAX in the United States with 24 jets, behind Southwest Airlines with 34.

Boeing has been working on a software upgrade for an anti-stall system and pilot displays on its fastest-selling jetliner in the wake of the deadly Lion Air crash in Indonesia in October.

Pilots will have to complete FAA-approved computer-based training on the changes, followed by a mandatory test, and some pilots have said more may be needed. 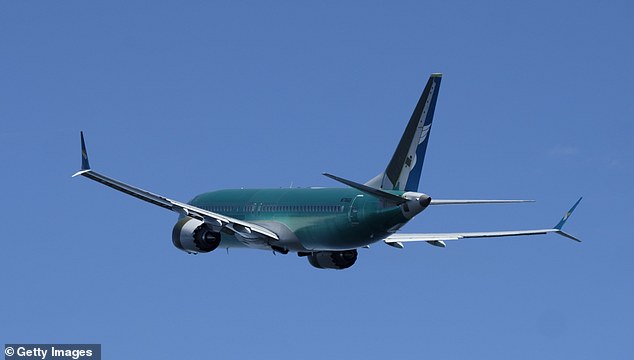 A Boeing 737 MAX 8 airliner takes off from Renton Municipal Airport near the company’s factory, on Friday

After Lion Air, American pilots met with Boeing executives in Fort Worth, Texas and demanded to know why the manufacturer had not told them about the new system, known as MCAS.

They also questioned whether a 56-minute iPad course on the MAX had been sufficient.

Meanwhile, Indonesia’s flag carrier is seeking the cancellation of a multibillion dollar order for 49 of the manufacturer’s 737 Max 8 jets, citing a loss of confidence after two crashes within five months.

It is the first announcement of a cancellation since Boeing’s new model aircraft were grounded following fatal crashes in Indonesia and Ethiopia.

PT Garuda Indonesia, which had ordered 50 Max 8 jets in 2014 and had received just one plane last year, sent a letter to Boeing last week requesting to cancel the order worth $4.9 billion, company spokesman Ikhsan Rosan said Friday. The carrier has so far paid Boeing about $26 million for the order. 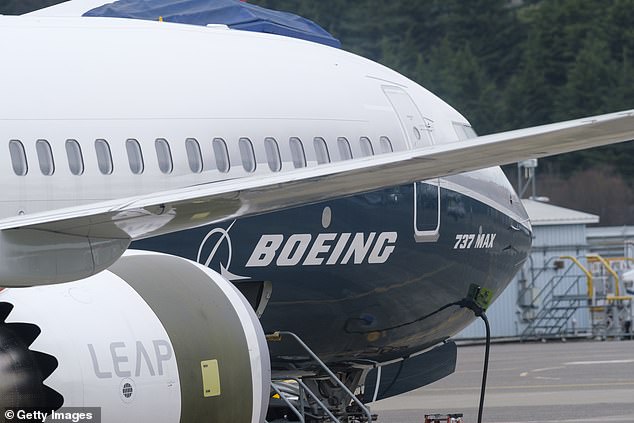 A Boeing 737 MAX 9 test plane is pictured at Boeing Field on Friday in Seattle, Washington

Boeing said it was stopping production of the planes for three days next week ‘to help us recover from the impact of the winter storms and supplier delays.’

But they said otherwise it would be business as usual.

‘The production lines will not pulse forward on those days, work will continue in every area inside and outside the factory.’

The Wall Street Journal reported late Friday that federal investigators are looking into whether Boeing gave U.S. regulators and the company’s customers incomplete or misleading information about the jets. The report cited people familiar with the matter who were not named.

Earlier this week, a person briefed on the matter told The Associated Press that U.S. prosecutors are looking into the development of the 737 Max jets. The Transportation Department’s inspector general is also investigating the FAA’s approval of jets, a U.S. official told AP.

Boeing Co. shares closed Friday down $10.53, or 2.8 percent, at $362.17 amid a broad stock market decline. Boeing shares have dropped 14 percent since the Ethiopia Airlines crash. 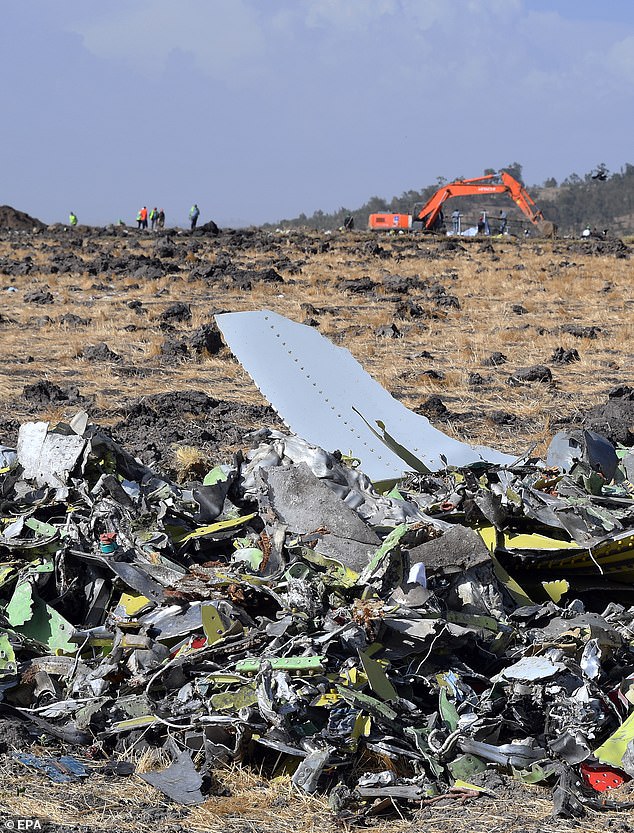 Pieces of the wreckage of an Ethiopia Airlines Boeing 737 Max 8 aircraft are piled at the crash site near Bishoftu, Ethiopia, 13 March 2019