will meet next week and try to convince her to pursue a softer as he left the door open to cancelling leaving the EU altogether.

36 hours after he stormed out of crunch talks because Chuka Umunna was invited the Labour leader said he is now willing to sit down with the PM.

Mr Corbyn says he will meet Mrs May on Monday – before she is due to put her ailing deal before MPs for a third time – and his main aim is to force her to abandon No Deal.

And he said that Labour would get behind her if she agreed to pursue a softer Brexit that includes Britain staying in a customs union with the EU. 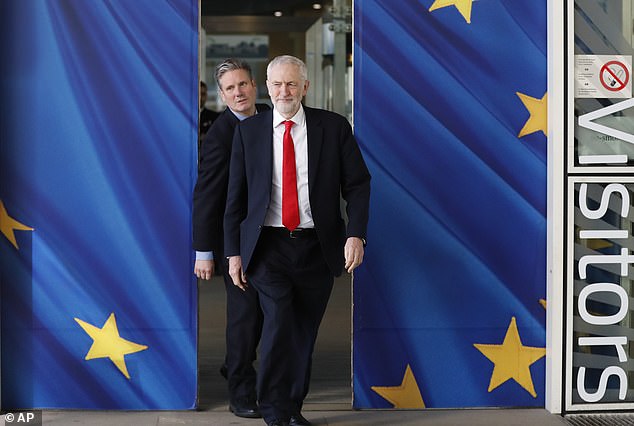 Labour Party leader Jeremy Corbyn, right, and Keir Starmer, Labour Shadow Brexit secretary, leave EU headquarters prior to an EU summit in Brussels where he said he would now sit down with the PM

He told ‘We’re the responsible party here. We’re not running down the clock, we’re looking for solutions.

‘If she could say she’s prepared to understand what we’re saying, the points we’re making about the future – customs union, dynamic relationship with Europe – then we will be able to talk to her about that. She’s got to move forward on how things can change’.

Earlier the Labour leader was twice asked if he might formally ask the Government to halt the process of leaving the EU if Britain was heading for No Deal.

He refused to rule it out both times, adding that a second referendum was also possible.

During ‘very constructive discussions’, he laid out his plan for a ‘softer’ Brexit which would lock us into a permanent customs union with the EU.

Before last night’s Brussels talks delivered two new possible dates for Brexit – April 12 or May 22 – Mr Corbyn was asked if Labour would ‘contemplate’ a longer Brexit delay if Mrs May’s deal is rejected again next week, or if it would support revoking Article 50.

He replied: ‘These are hypotheticals. So far as we’re concerned, we think there’s an urgency in constructing a majority for an agreeable solution and that’s what we’re concentrating on at the moment.’ 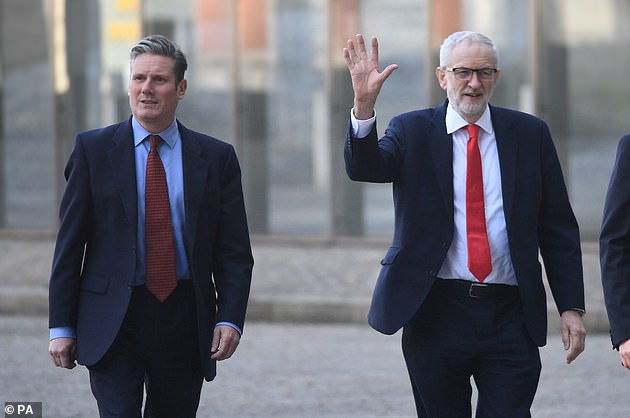 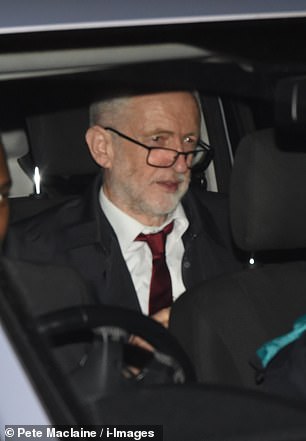 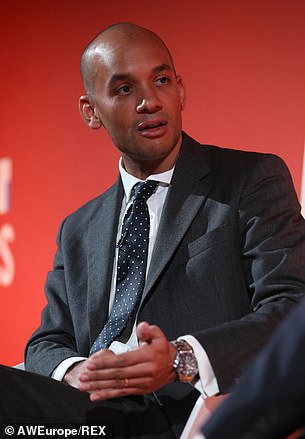 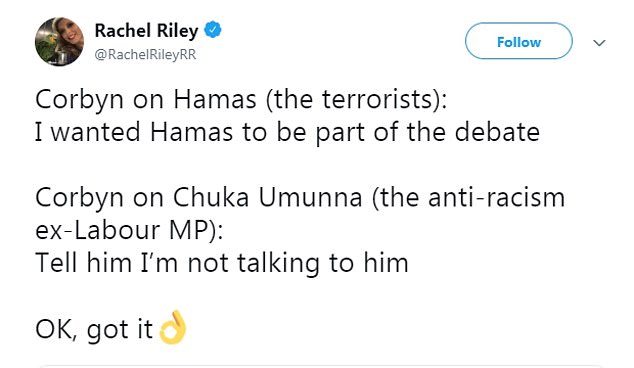 She wrote on Twitter: ‘Corbyn on Hamas (the terrorists): I wanted Hamas to be part of the debate. Corbyn on Chuka Umunna (the anti-racism ex-Labour MP): Tell him I’m not talking to him’

The Labour leader again dodged the question when asked directly if he would ‘rule out’ cancelling Brexit.

He said: ‘We think what we’re proposing can be achieved in Parliament, we do believe we can construct a majority that will prevent all the chaos that will come from crashing out.’

Mr Corbyn also hinted that he could back a bid for a second referendum.

He added: ‘Our determination is to prevent a No Deal exit from the EU.’

It comes following reports that cross-party talks for a softer Brexit with Remainer MPs are gaining ground.

Talks between Labour and Conservative MP Nick Boles for a Norway-style ‘Common Market 2.0’ – possibly with single market involvement or a permanent customs union – are nearing a deal, the BBC said.

Mr Corbyn also defended his behaviour after walking out of a crucial Brexit meeting with Mrs May on Wednesday because Labour defector Chuka Umunna was present.

A slew of critics accused of him ‘extraordinary, juvenile’ behaviour and pointed out that in the past he has been willing to sit with members of the terror group Hamas, as well as inviting IRA members to the Commons just days after the 1984 Brighton bombing.

But yesterday the Labour leader claimed there had been ‘confusion’ over the meeting.

‘We have done a great deal to listen carefully and try to construct a majority that can bring about a resolution.’