‘s new husband Chris Fischer is hardly the most romantic man on the planet — which suits her just fine.

In her new special, Amy Schumer: Growing, the 37-year-old gets real about her 30s, pregnancy, and her relationship, using her signature blunt honesty to tackle the not-so-glamorous aspects of real life.

One thing in her life that certainly wasn’t glamorous: Her marriage proposal from Chris, 39, whom she says tossed a ring box at her when she was still sleeping and then wondered aloud if she needed him to get down on one knee. 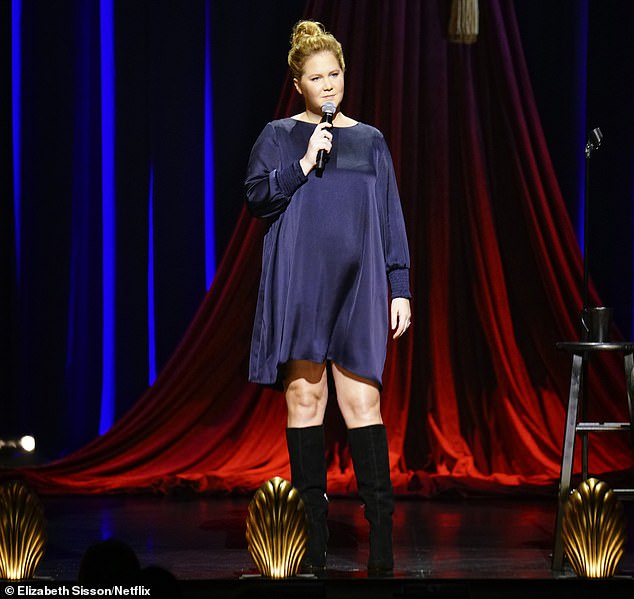 Making light: Amy Schumer shared the unromantic details of her proposal from now-husband Chris Fischer in her new Netflix special 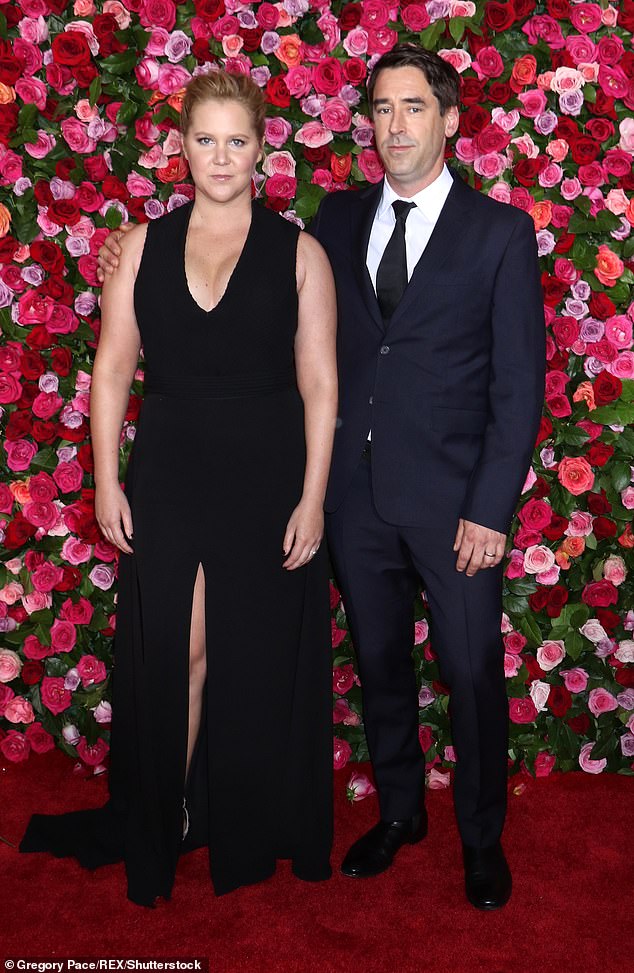 Straight to the point: She said she was still sleeping one morning when Chris woke her, tossed a ring box on the bed, and said, ‘I got you this’ 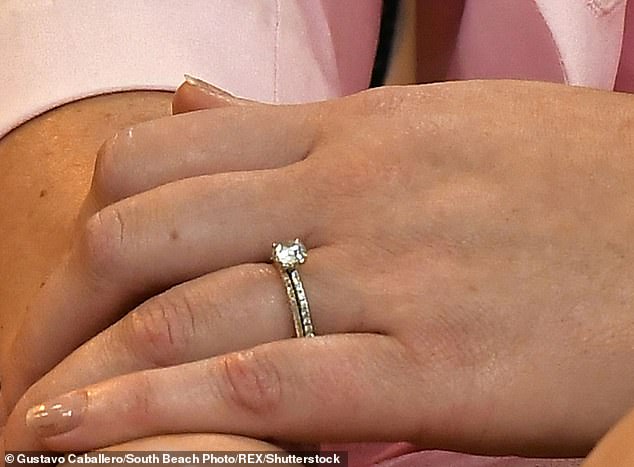 Super simple: ‘And I open it and he goes, “Do you want me to get down on one knee?” And I’m like,’ she paused, making a face like she’s thinking about it, ‘I guess not’

Amy and Chris married in February of 2018 and are now expecting their first child.

‘The proposal was whack,’ Amy said. ‘He proposed to me in the morning. That’s like when people in a nursing home get engaged. Not like at sunrise, like I was still asleep. I was sleeping.

‘And I sleep like I’m still in the womb: earplugs, eye mask, my mom’s legs around my shoulders.

‘So I’m in the womb, and he comes in and I just like took one ear plug out, I was like, eh?’ she said, making a face indicating she looked less than her best at the moment.

‘And he just kind of threw the ring box at me and he goes, “I got you this.”

‘And I open it and he goes, “Do you want me to get down on one knee?” And I’m like,’ she paused, making a face like she’s thinking about it, ‘I guess not.’

‘And then I went back to sleep. That’s the truth,’ she went on.

Amy opened up quite a bit about her relationship in the new special, including sharing the revelation that her husband is on the autism spectrum.

‘I knew from the beginning that my husband’s brain was a little different than mine,’ she said. ‘My husband was diagnosed with what used to be called Asperger’s. He has autism spectrum disorder. He’s on the spectrum. 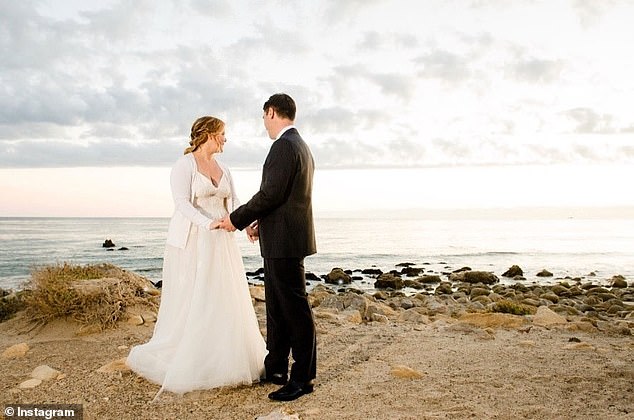 In love: She and Chris, a chef, got married last year and are now expecting their first child 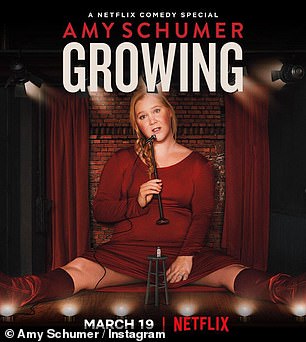 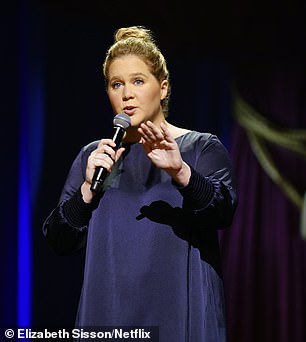 Candid: In her new Netflix special, Amy Schumer: Growing, the 37-year-old gets real about her 30s, pregnancy, and her relationship

She admitted that there were signs early on, recalling once, a year ago, when the couple went for a walk together.

Amy fell, and instead of stopping and going, ‘Oh my god, are you OK?’ her husband just stood there, frozen, ‘opening and closing his mouth.’

THE SIGNS AND SYMPTOMS OF AUTISM

According to the Centers for Disease Control and Prevention, people with autism have trouble with social, emotional and communication skills that usually develop before the age of three and last throughout a person’s life.

Specific signs of autism include:

‘And once he was diagnosed, it dawned on me how funny it was, because all of the characteristics that make it clear that he’s on the spectrum are all of the reasons that I fell madly in love with him. That’s the truth,’ she said.

According to the , people with autism spectrum disorder is a developmental condition which involves ‘persistent challenges in social interaction, speech and nonverbal communication, and restricted/repetitive behaviors.’

The severity can greatly vary, hence the use of term ‘spectrum.’ Asperger’s, which is now simply considered part of the spectrum, used to be the diagnosis for very high-function autism.

One of the biggest challenges for people with Asperger syndrome is understanding some social cues and following social norms — something Amy has observed in her husband.

‘He says whatever is on his mind. He keeps it so real,’ she said.

‘He doesn’t care about social norms or what you expect him to say or do.

He also ‘can’t lie,’ a trait she loves. The only things that’s problematic about that, she said, is that he doesn’t just not lie to her — he doesn’t like for her, either.

For instance, Amy recently feigned ignorance when a female friend said she found out her ex had a new girlfriend, but Chris blew her cover. 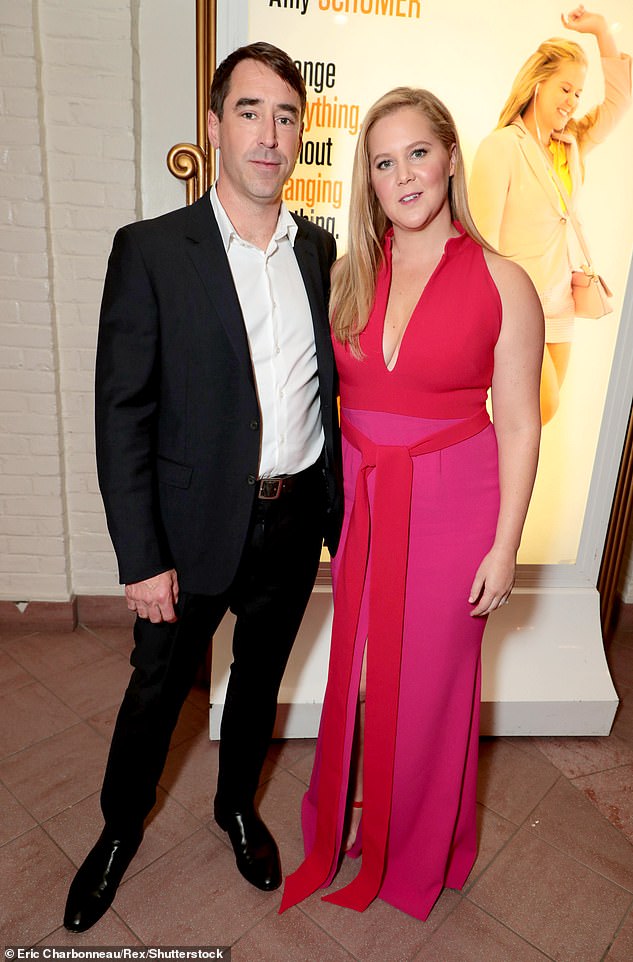 Revelation: She also shared that her husband is on the autism spectrum 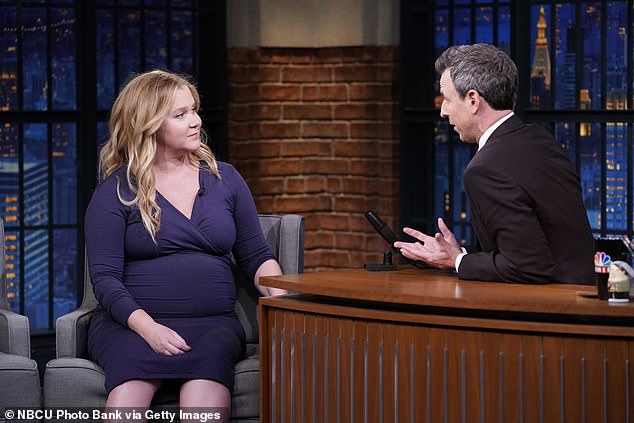 Real talk: Amy discussed why she chose to talk about her husband’s ASD on the Late Night with Seth Meyers this Wednesday

Amy already knew but pretended it was news to her — which didn’t work when Chris pointed out right in front of the friend that Amy had known for some time.

Chris, meanwhile, is supportive of Amy discussing is autism in her special.

On the Late Night with Seth Meyers this Wednesday, Amy discussed why she chose to talk about it in her comedy routine.

‘He was diagnosed as high functioning autism spectrum disorder,’ she said. ‘We both wanted to talk about it because it’s been totally positive.

‘I think a lot people resist getting diagnosed and even some of their children because of the stigma that comes along with it, but you’re not just diagnosed and then they throw you out.

‘The tools we’ve been given have made his life so much better and our marriage and our life much more manageable, and so, I just wanted to, you know, encourage people to not be afraid of that stigma.

‘I think there a lot of people with autism who go undiagnosed when I think their life could be better if they got those tools.

Couple who raised $400k for homeless man told to hand cash over
Kim Jong-un welcomes the South Korean president and his wife to Pyongyang
Saudi government dismisses sexual harassment reports as 'baseless'
Choreographer and dance team coach DENY saying a black student's skin was 'too dark' to perform
Trump says he wouldn't steer son Barron toward playing football in interview just before Super Bowl
National Enquirer says leaker of Jeff Bezos texts is 'well known' to him and mistress
Japan resumes commercial whaling after 31 years, despite criticism
The 1,000-bed Comfort has only accepted 20 patients despite crisis in New York City