Social media users couldn’t help but comment on Elizabeth Holmes voice after watching the Theranos CEO in HBO documentary The Inventor: Out for Blood in Silicon Valley Monday.

Viewers were shocked to hear the 35-year-old Washington DC woman spoke in a lower tone than expected, something that a former employee at her company, has claimed is fake.

Twitter users joked that her vocal tones were the only thing they could focus on as they watched the program that revisited tragic details of how an employee took his own life rather than expose the fact that the $9billion company was built around a machine that did not work. 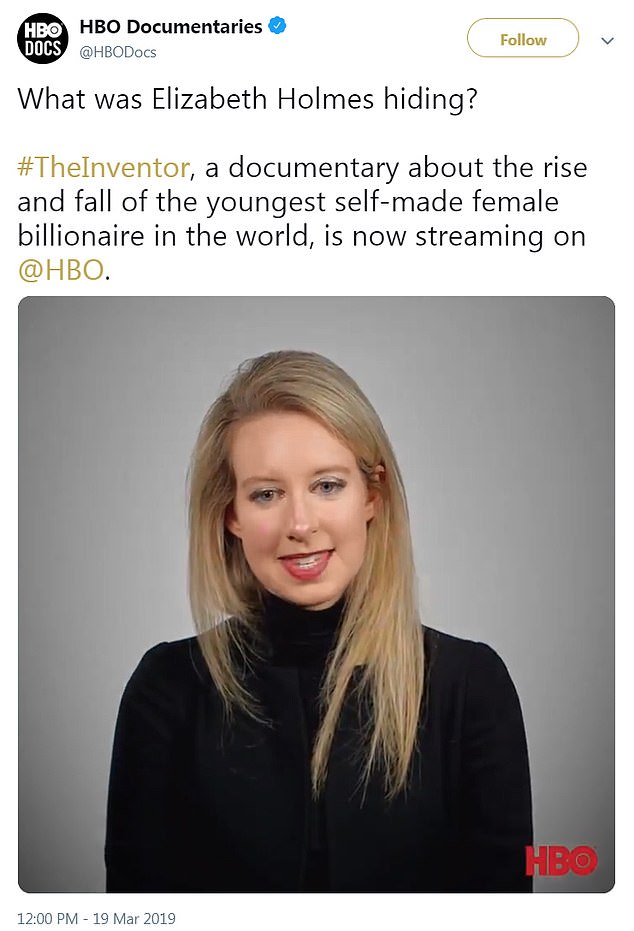 Social media users commented on Elizabeth Holmes voice after watching HBO documentary The Inventor: Out for Blood in Silicon Valley on Monday 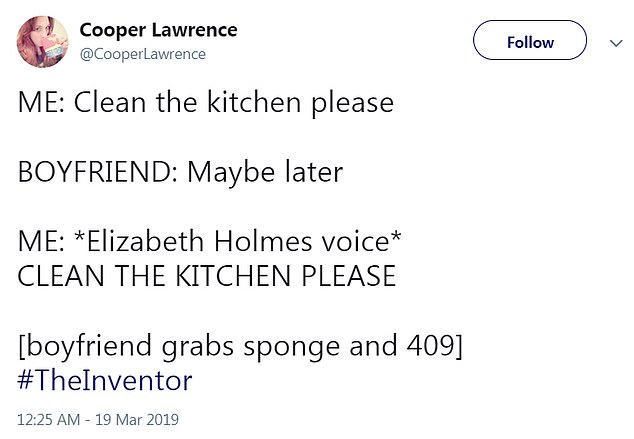 Another posted: ‘I’m worried I might start talking in an Elizabeth Holmes voice and never stop,’ to which HBO Documentaries replied: ‘*clears throat* Us, too,’ and HBO’s account commented: ‘I’ve already stopped blinking.’

In second comment, the network’s social media manager referred to a moment in their documentary where someone connected to Holmes said the first thing they noticed about her was that she ‘didn’t blink’.

But footage of Holmes in The Inventor had viewers more intent on listening than looking for her eyelids to close.

Speaking about the vocal cord vibration, caused by letting air pass between them to create a creaky sound, a tweeted joked: ‘have spent the better part of the evening trying to drop my voice and speak in a basso profundo a la Elizabeth Holmes and it’s possible I’ve damaged my vocal cords irreparably.’ 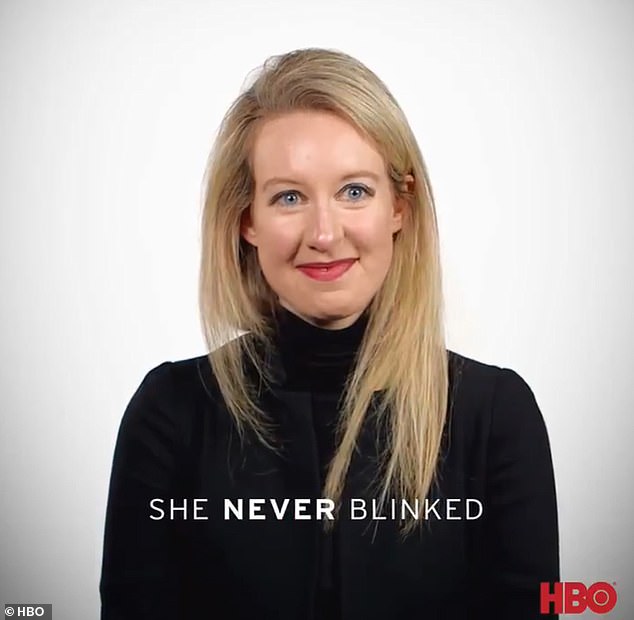 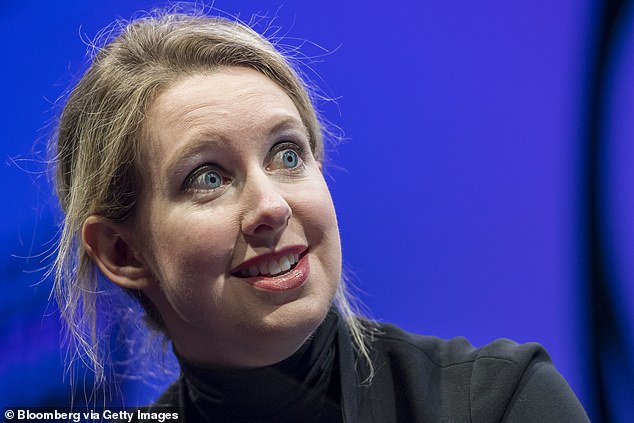 Users on the micro-blogging site declared Holmes’s voice was so powerful that they’d use it to deliver instructions or requests with more conviction.

Others said the deep and breathy sound synonymous with California Valley girls simply reminded them of trying to sound more mature.

It’s something Stanford professor Dr. Phyllis Gardner may agree with. She told ABC Radio’s podcast that Holmes’ voice was higher pitched when they first met.

When she came to me she didn’t have a low voice,’ Gardner said. ‘When I next saw her again was at the Harvard Medical School board meeting where she was being introduced. She says with this low voice and I’m like, ‘Oh my god.’ It was quite off.’

As well as claiming that Holmes modeled her fashion after Steve Jobs in turtlenecks, former employee, Ana Arriola, claimed that staff caught her out at one point.

‘It was maybe at one of the company parties, and maybe she had too much to drink or what not, but she fell out of character and exposed that that was not necessarily her true voice,’ Arriola said in the podcast. ‘Maybe she needed to be more convincing to project a persona within a room among male [venture capitalists], I’m not really quite sure.’ 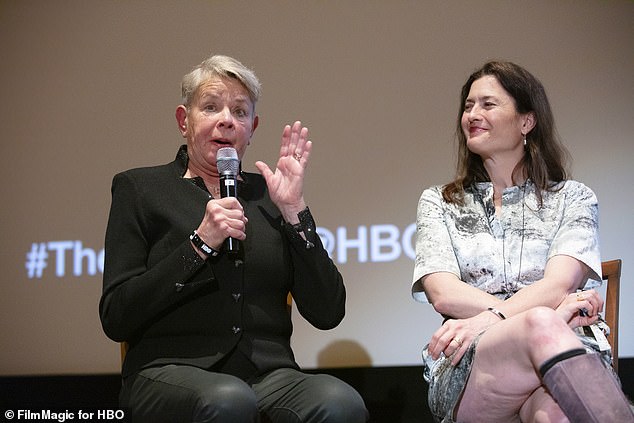 The much anticipated documentary revisited how Theranos biochemist Ian Gibbons was found close to death in his bathroom after taking an overdose of pills on the morning of May 17, 2013, the same day he was to be deposed in a patent lawsuit filed against Theranos by a competitor.

He died in the hospital one week later, at which point his widow called the Theranos office to inform Holmes of the devastating news.

Holmes, who is currently awaiting a date being set for her fraud trial, did not call back however, and instead Gibbons’ grieving wife was sent an email demanding she turn over her husband’s computer and any other confidential Theranos documents.

Gibbons was the first experienced scientist hired by Theranos and an expert in the field of blood testing, having patented a mechanism for mixing and diluting blood that was a crucial part of the company’s technology.

He began working at Theranos in 2005, and the Cambridge-educated biochemist shared the rights to a number of patents with Holmes.

It is believed by most people that it was Gibbons who did all the work to obtain these patents, to which Holmes would simply attach her name. 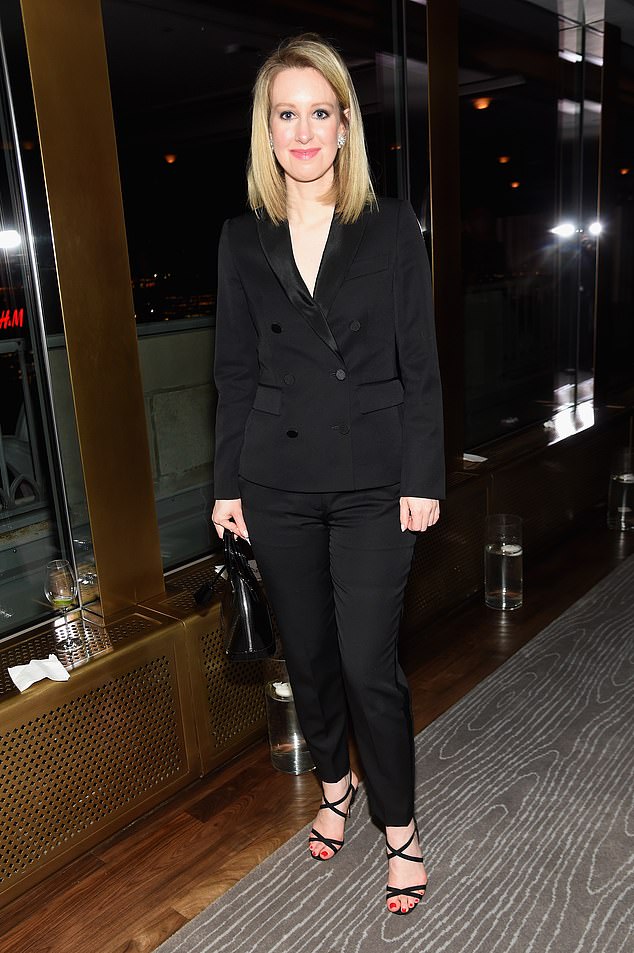 Deadly ambition: Theranos founder Holmes (above in 2015) is accused of using a fake voice 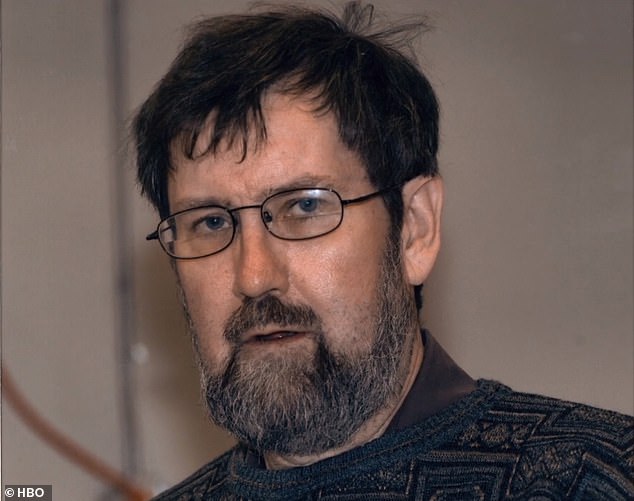 Logic: In the months leading up to his deposition, Ian Gibbons, who took his own life in 2013 became increasingly ostracized at Theranos, and vocal about the problems with the Edison 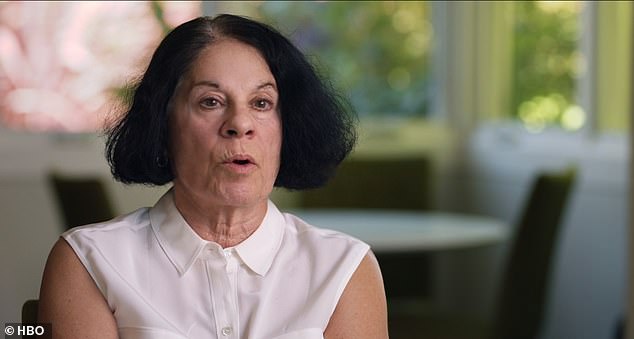 Devastated: His widow Rochelle (above) said that the night before he was to be deposed he asked her if she believed he was going to lose his job, and she said yes

Gibbons began to notice over time however that Edison, the machine that Holmes had claimed would revolutionize the medical industry, did not work.

That situation was further complicated by Holmes’ business model, which forced each department in her company to operate independently and not share any information.

Former co-workers describe him as a ‘wealth of knowledge’, but by 2012 he had been ostracized to the point that he did not even have an office at the company headquarters.

In early 2013, Theranos was hit with a patent lawsuit, and did everything in its power to keep Gibbons from testifying.

The belief at the time was that this was because he might reveal that the Edison did not function, thus shattering the groundwork on which the company had been built.

A former Theranos employee said that he had been told Gibbons was asked to stay home by Holmes due to the fact that he continually pointed out things that were not working with the company’s inventions.

‘Ian asked me if I thought he was going to be fired. And I told him yes, unfortunately,’ said Rochelle. ‘And that was the night he killed himself.’

She went to explain how ‘distraught’ her husband was at the time about the patent case and his fears over what he was going to do with the rest of his life once he was fired from the company where he had spent the past eight years of his life.

When asked if she has ever once heard from Holmes in the six years since her husband took his life, Rochelle said: ‘No.’

They are next due in court in April for a status hearing ahead of a trial date being set and could face up to 20 years behind bars if convicted.