The two Boeing 737 Max 8 jets that crashed in Ethiopia and Indonesia lacked two safety features in their cockpits that the aircraft manufacturer charges extra for but could have helped pilot detect erroneous readings.

The optional safety features – an angle of attack (AoA) indicator and a disagree light – are not mandated by the Federal Aviation Administration and are currently only installed if the airline pays for the add-ons.

Lion Air Flight 610 and Ethiopian Airlines Flight 302 were not equipped with either safety feature, officials told the .

An angle of attack indicator determines how much the aircraft’s nose is tilted up or down, while the disagree light activates if the attack readings do not match and give contradictory signals. The light tells pilots if two key sensors in the plane’s software do not agree. 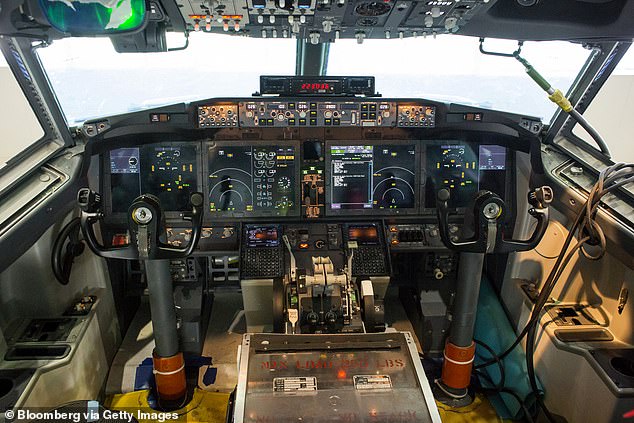 The two Boeing 737 Max 8 jets that crashed in Ethiopia and Indonesia lacked two safety features in their cockpits that the aircraft manufacturer charges extra for. Pictured above is the cockpit of one of the 737 Max 8 jets being built in Washington

Boeing will now make the disagree light free of charge as part of a forthcoming software update to the 737 MAX fleet in the wake of the two fatal crashes, officials briefed on the matter said on Thursday.

The manufacturer will also retrofit older planes with the light that did not initially receive it.

The angle of attack indicator will remain a feature that airlines can add on, officials said.

Boeing has not commented about the safety features.

The entire 737 MAX fleet has been grounded following the deadly crashes in Ethiopia and Indonesia that occurred just five months apart.

As investigators look into the crashes, attention has turned to a new software in the jets that can push their nose down in some circumstances, for example when the sensors suggest the plane may be stalling.

Faulty angle of attack sensors were blamed, in part, for the Indonesia disaster last October that killed 189 people. The sensors have also been at the center of initial investigations into this month’s Ethiopia crash in which 157 died.

While the two features missing from those two planes are not required by regulators, experts said they were key to safety.

‘They’re critical, and cost almost nothing for the airlines to install,’ Bjorn Fehrm, an analyst at the aviation consultancy Leeham, told the New York Times.

‘Boeing charges for them because it can. But they’re vital for safety.’

The feature is sold at an extra cost, which means some budget airlines like Lion Air have chosen not to fit them. 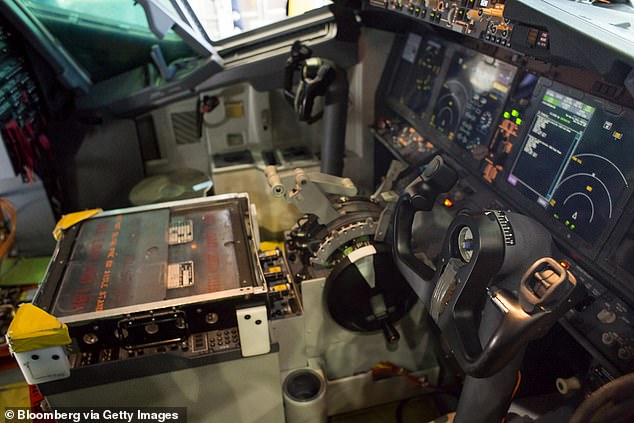 The cockpit of a Boeing Co. 737 MAX 9 jetliner is seen during production at the company’s manufacturing facility in Renton, Washington. Boeing will now make the disagree light free of charge as part of a forthcoming software update to the 737 MAX fleet 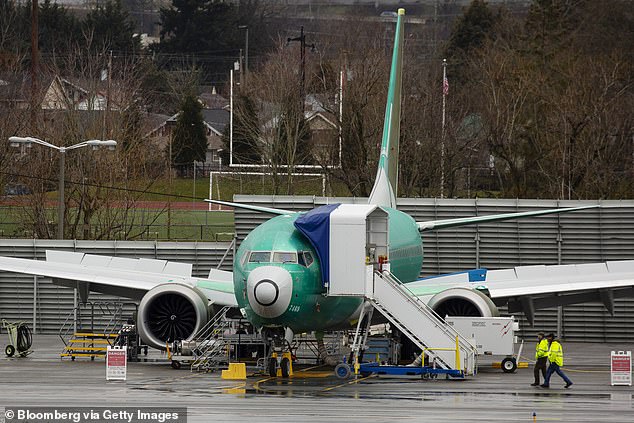 Boeing will now make the disagree light free of charge as part of a forthcoming software update to the 737 MAX fleet in the wake of the two fatal crashes. Pictured is a Boeing 737 MAX 8 plane at the company’s manufacturing facility

The March 10 Ethiopian Airlines crash has set off one of the widest inquiries in aviation history and cast a shadow over the Boeing 737 MAX model intended to be a standard for decades.

Initial investigations show similarities between the Ethiopian crash and the Indonesian accident in October that killed all 189 crew and passengers.

Reuters reported on Wednesday that the Lion Air pilots scrambled through a handbook to understand why the jet was lurching downwards in the final minutes before it hit the water.

WHAT IS AN ANGLE OF ATTACK INDICATOR?

An angle of attack indicator determines how much the aircraft’s nose is tilted up or down.

It is the angle between a plane’s wing and the oncoming air, according to the FAA.

If the angle of attack becomes too great, the wing can stall and lose lift.

If a pilot fails to recognize and correct the situation, a stall could lead to loss of control of the aircraft and an abrupt loss of altitude.

The indicator can alert pilots of low airspeed conditions before a aerodynamic stall occurs, especially during takeoff and landing. Such stalls can send the plane downwards in an uncontrolled way.

A final report on the Lion Air crash, which has taken on new urgency since the Ethiopian one, is expected in August. The first report from Ethiopia’s inquiry is expected within a month.

While no direct link has been proven between the two crashes, investigators are focusing on an automated flight-control system, MCAS (Maneuvering Characteristics Augmentation System), that came into service with the MAX two years ago.

The software is designed to prevent a loss of lift which can cause an aerodynamic stall, sending the plane downwards in an uncontrolled way. In the Lion Air crash, it may have been erroneously activated by a faulty sensor, investigators believe.

Angle of attack sensors would tell MCAS to point the nose of a plane down if it was in danger of stalling.

According to the flight data recorder, the pilots of Lion Air Flight 610 struggled to control the aircraft as the automated MCAS system repeatedly pushed the plane’s nose down following take-off.

The pilots of the Ethiopian Airlines plane reported similar difficulty before the aircraft plunged into the ground near Addis Ababa on March 10.

AoA is the angle of the wing relative to oncoming air stream, a measure that indicates if a plane is likely to stall.

After the Lion Air crash U.S. aviation officials had issued a warning that pilots of Boeing 737-8 and 737-9 planes ‘could have difficulty controlling the airplane’.

A faulty sensor could cause ‘excessive nose-down attitude, significant altitude loss, and possible impact with terrain’, the Federal Aviation Administration had warned.

Indonesia has denied that it had leaked details from the Lion Air jet’s cockpit voice recorders. Officials disputed reports describing conversations as the pilots panicked just before their Boeing jet plunged into the Java Sea on October 29.

The chairman of the National Transportation Safety Committee told reporters that data from the cockpit voice recorder did not match reports detailing how the pilot and co-pilot struggled to regain control of the plane.

Investigators say they are still analyzing conversations from the cockpit voice recorder, which was only recovered from the seabed in January. 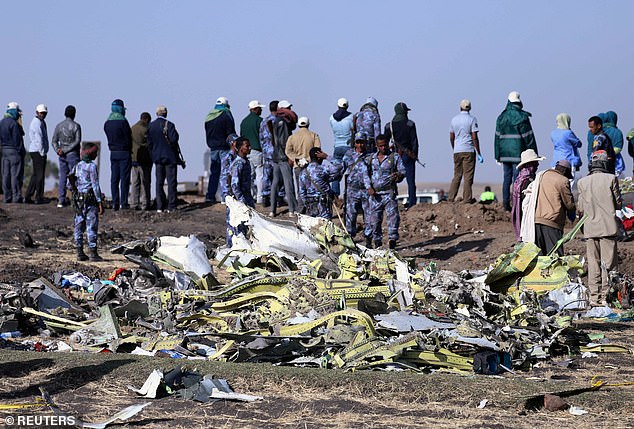 Ethiopian emergency services work at the scene of the crash near Addis Ababa on March 10. The crash has set off one of the widest inquiries in aviation history and cast a shadow over the Boeing 737 MAX model intended to be a standard for decades 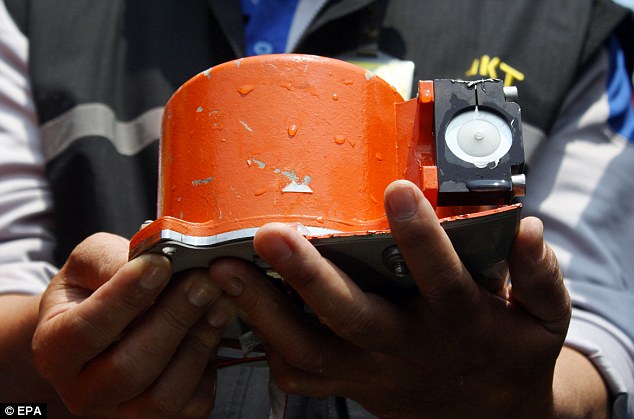 Under unprecedented scrutiny and with its MAX fleet grounded worldwide, the world’s largest planemaker has said airlines were given guidance on how to respond to the activation of MCAS software. It is also promising a swift update to the system.

A Boeing spokeswoman said training on the software update would be provided by the manufacturer, but declined to disclose further details. 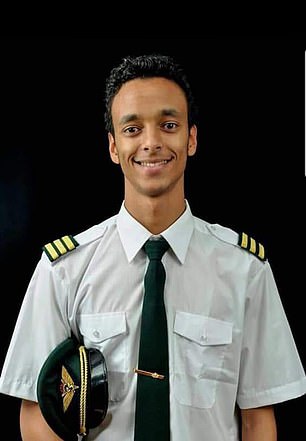 Simulators for the Boeing 737 MAX are now being manufactured but they have yet to be delivered to most airlines that have ordered them. Ethiopian Airlines has a simulator but the captain of the doomed flight, Yared Getachew, had no chance to practice on it before the fatal crash, a pilot colleague said

Simulators for the Boeing 737 MAX are now being manufactured but they have yet to be delivered to most airlines that have ordered them. They have not formed part of the required conversion training for existing 737 pilots and are not designed to replicate the MCAS system problems, Ethiopian Airlines said.

It is among the few that do have such a simulator but the captain of the doomed flight had no chance to practice on it before the fatal crash, a pilot colleague said.

Yared Getachew, 29, was due for refresher training at the end of March, his colleague said, two months after Ethiopian Airlines had received one of the first such simulators being distributed.

‘Boeing did not send manuals on MCAS,’ his fellow Ethiopian Airlines pilot said. ‘Actually we know more about the MCAS system from the media than from Boeing.’

The Federal Bureau of Investigation has joined a criminal probe into the certification of the 737 MAX, the Seattle Times reported, while the Pentagon Inspector General will investigate whether acting Secretary of Defense Patrick Shanahan, a former Boeing executive, violated ethical rules by allegedly promoting the company when in office.

Boeing will also be summoned to a U.S. Senate panel hearing for questioning over the crashes, and the panel will separately question FAA officials.

Regulators in Europe and Canada have said they will seek their own guarantees of the MAX’s safety.