The razor wire barriers installed under President at the Mexican border fence are reportedly being stolen and used for home security in Tijuana.

Officials there say a surge in crime in the city has seen up to 20 people arrested for removing the concertina wire overnight before selling it on.

It is the same galvanized steel wire installed in November along the border by the Department of Homeland Security, reports.

Some of the stolen fencing has already been replaced by contractors who were seen Monday on the U.S. side of the border fence.

Tijuana was named the most violent city in the world in 2018. The Citizens’ Council for Public Security and Criminal Justice reports it saw an average of seven killings per day as gangs battle over drugs. 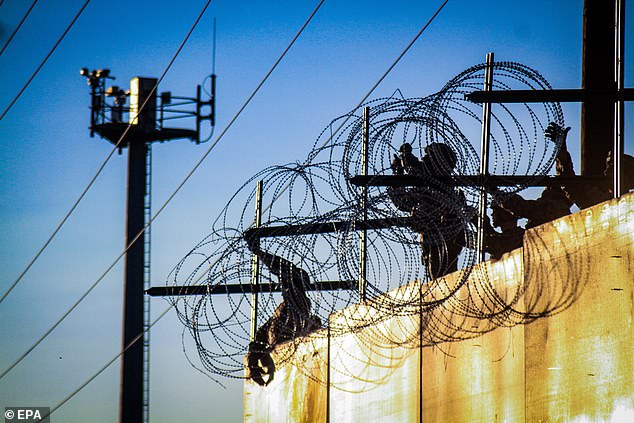 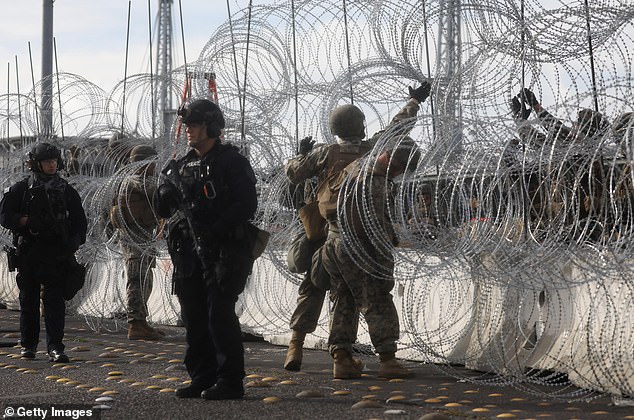 U.S. Customs and Border Protection agents stand watch as troops handle concertina wire. Officials say a surge in crime in Tijuana has seen up to 20 people arrested stealing the wire

Marco Antonio Sotomayor Amezcua, the secretary of public safety in Tijuana, said the wire being stolen is distinctive from any sold in shops in the area.

He added: ‘We have detected that the barbed wire that was installed in the border area is no longer there.

‘We know about the stealing of the concertina (wire) from United States authorities who have asked us for help through the liaison staff.’

The San Diego Union Tribune reports how homes in the area appear to already have the extra security in place.

One anonymous homeowner said: ‘I don’t actually live here in this house, so I have no idea how that wire got here.’

A statement from the U.S. Customs and Border Protection in November said the wire was installed ‘to prepare for the potential arrival of thousands of people migrating in a caravan heading towards the border of the United States’.

Trump tweeted an image of the wall covered in the wire, writing: ‘The Fake News is showing old footage of people climbing over our Ocean Area Fence. This is what it really looks like – no climbers anymore under our Administration!’

Director Reynaldo González Mora said: ‘The people arrested were mainly Mexican and most were people who have been deported from the United States, and people who have problems with drug addiction and live mostly on the street.’

Photos of people climbing the fence and sitting on top of the wall lead to Border officials adding razor wire to the top and bottom of the fence that divides San Diego from Tijuana. 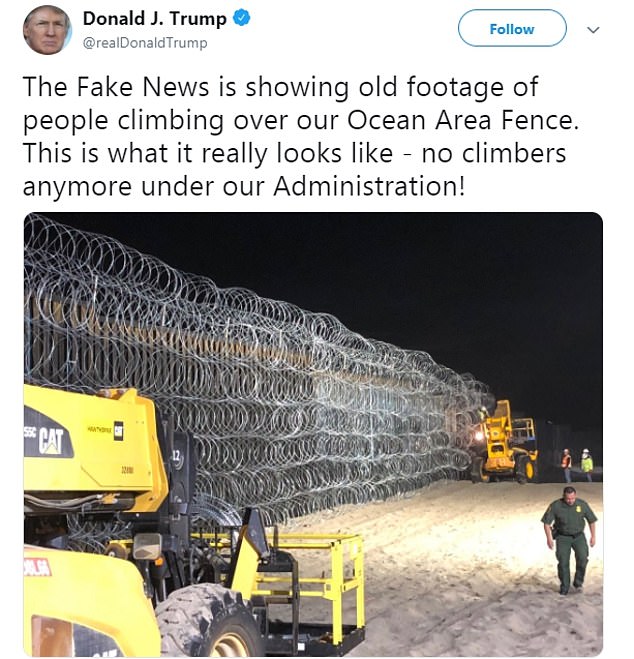 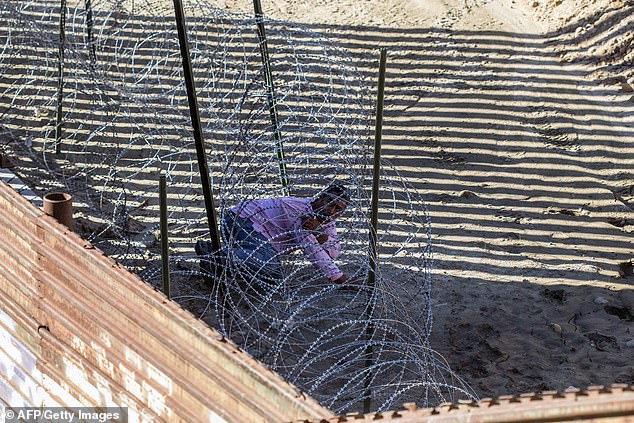 A Mexican migrant tries to make his way through a concertina wire, shortly after crossing the US-Mexico border fence from Tijuana to San Diego County in the US

A U.S. Customs and Border Protection spokesman told the DailyMail.com: ‘A 14-mile wall construction project began in June 2018 in San Diego. The old eight to 10-foot high Vietnam era landing mat wall is being removed, and new 18-foot high bollard-style wall with anti-climb plate is being built. The project is near completion.

‘During construction, gaps were temporarily created in order to make way for the new wall. Concertina wire was used to fill these gaps, making it susceptible to damage and theft from the south side of the border.

‘Because of increased border incursions, concertina wire was temporarily used to enhance the old wall until the new wall could be constructed. Some concertina wire was stolen, but was later recovered by Mexican law enforcement partners and returned to the Border Patrol.

‘We are grateful for this partnership, as it enhances border security efforts for both countries. San Diego Sector cannot confirm reports that the stolen material is being used to provide security around homes in Tijuana.’

Man accused of tightening rope around pregnant woman's neck while his girlfriend cut out her baby
Ozone layer will be completely HEALED by the 2060s
Trump says Democrats won't fund his border wall because they have their 'eye on 2020'
Lecturer who likened abortion to necrophilia says free speech is gone in academia
Mom and son who were bludgeoned to death will have to be cremated as you 'can't see their faces'
Student project places one person's face on another to thwart facial recognition software.
Police arrested an innocent man for murder using Google location data
Dow plunges another 700 points as markets sound alarm bells of a possible global RECESSION