Meghan McCain’s fellow conservative co-host on The View is rallying to her side and attacking – even though her father is the president’s ambassador to .

Abby Huntsman, who like McCain worked at Fox News before she joined ABC’s popular daytime talk show, implicitly slammed Trump on Monday for once again criticizing Meghan’s dad, the late Senator John McCain, over the weekend.

Huntsman tweeted: ‘Proud of my good friend @MeghanMcCain for staying so composed through this nonsense.

‘The McCain family doesn’t deserve it and neither does this great country. 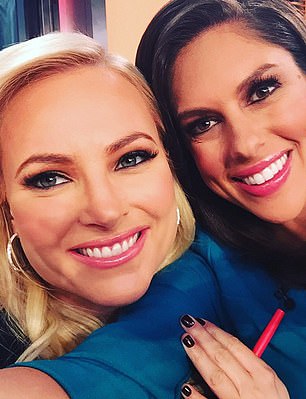 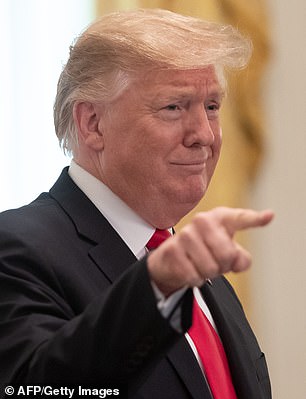 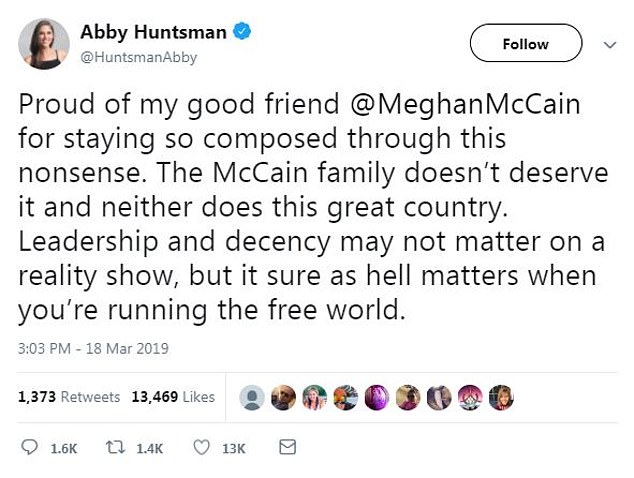 Huntsman tweeted: ‘Proud of my good friend @MeghanMcCain for staying so composed through this nonsense. The McCain family doesn’t deserve it and neither does this great country’ 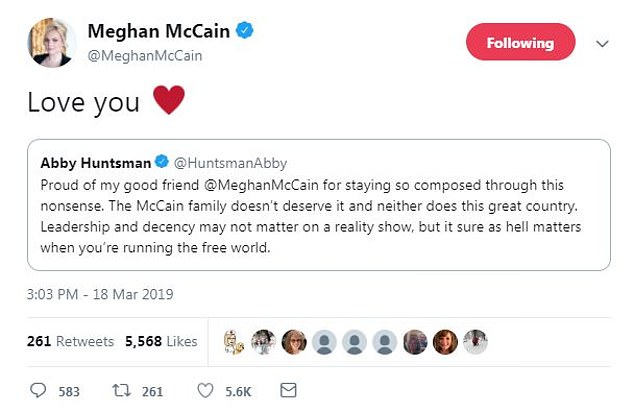 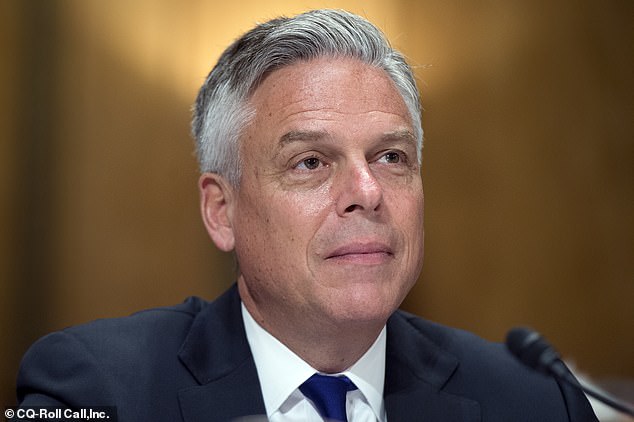 Abby Huntsman is the daughter of Jon Huntsman (above), who was appointed by Trump to be the United States ambassador to Russia

‘Leadership and decency may not matter on a reality show, but it sure as hell matters when you’re running the free world.’

While John McCain and his family never hid their distaste for Trump, the Huntsman family’s predicament is a bit more complicated.

Abby’s father, Jon Huntsman, was appointed by Trump to be the United States ambassador to Russia.

Before his Moscow posting, Huntsman served as Barack Obama’s ambassador to China. He had previously served a term as governor of Utah.

Earlier on Monday, McCain blasted Trump on The View for having a ‘pathetic life’ for spending his weekend tweeting criticism of her father.

‘He spends his weekend obsessing over great men, because he knows it, and I know it, and all of you know it, he will never be a great man,’ McCain said on the show. 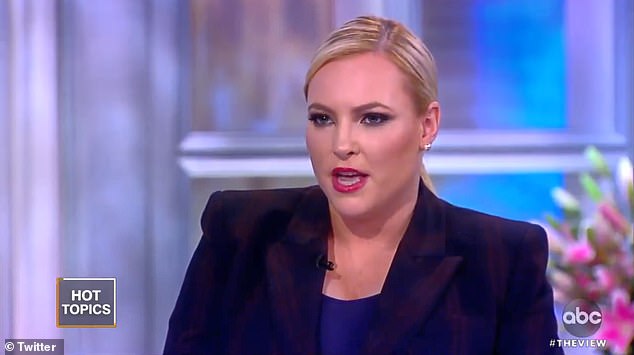 Meghan McCain escalated her response to President Trump’s criticism of her late father, saying the president has a ‘pathetic life’ 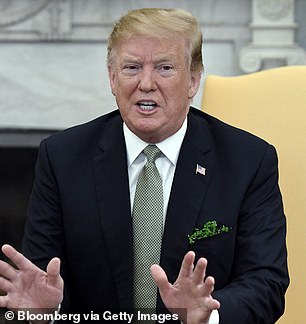 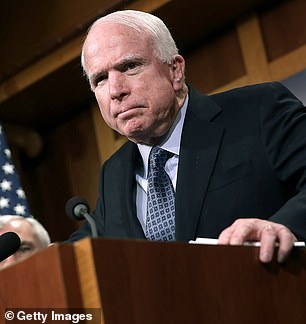 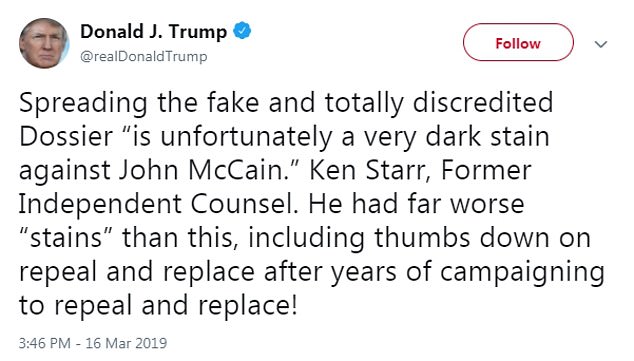 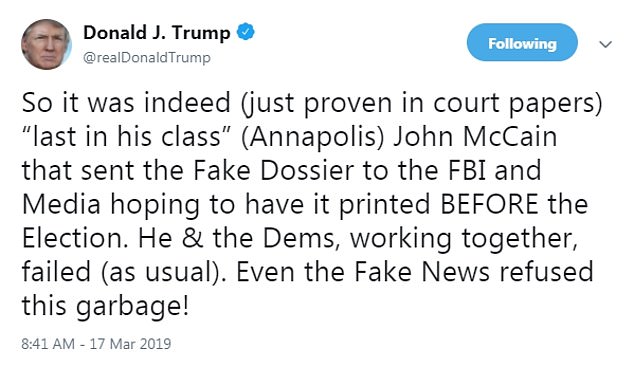 McCain said when she saw the president’s tweets she thought that ‘your life is spent on your weekends not with your family, not with your friends, but obsessing, obsessing over great men you could never live up to.’

‘That tells you everything you need to know about his pathetic life right now,’ she added.

‘I genuinely feel bad for his family. I can’t imagine having a father that does this on the weekends.’

Trump attacked the late senator twice this weekend on Twitter, focusing on McCain’s ties to the infamous Steele dossier that contains the unverified allegations the Russians have blackmail material on the president.

‘So it was indeed (just proven in court papers) ‘last in his class’ (Annapolis) John McCain that sent the Fake Dossier to the FBI and Media hoping to have it printed BEFORE the Election. He & the Dems, working together, failed (as usual). Even the Fake News refused this garbage!’ the president wrote on Sunday.

McCain was actually fifth from the bottom of his class at the Naval Academy.

On Saturday, Trump said McCain leaking the ‘dirty dossier’ was ‘dark stain’ on his legacy.

McCain’s ‘no’ vote on the GOP effort to take down Obama’s signature law stopped the effort in its tracks. 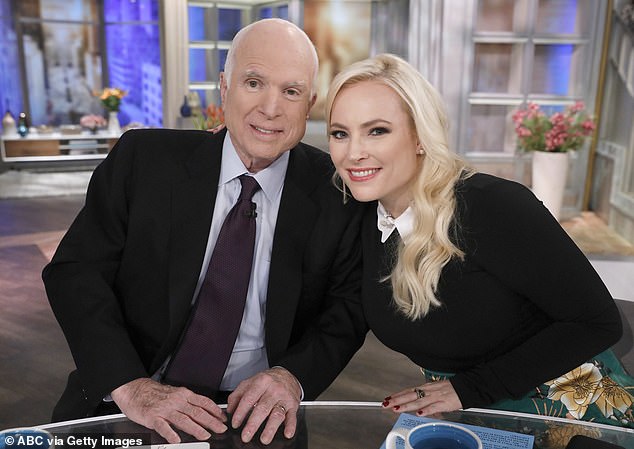 Meghan McCain poses with her father, Senator John McCain on The View in October 2017

The president and McCain had a testy relationship when the senator was alive leading to McCain not inviting Trump to his funeral, where the former Presidents Obama and George W. Bush gave the eulogies.

In regards to Trump’s allegations, there is no evidence that McCain shared the Steele dossier before the election.

The late senator did hand-deliver a copy of it to then-FBI Director James Comey in December of 2016, after the election, as McCain wrote in his book ‘The Restless Wave.’

‘The allegations were disturbing, but I had no idea which if any were true. I could not independently verify any of it, and so I did what any American who cares about our nation’s security should have done,’ McCain wrote. ‘I did what duty demanded I do.’

Meghan McCain also slapped back at the president on Saturday, saying he will never be loved.

‘No one will ever love you the way they loved my father…. I wish I had been given more Saturday’s with him. Maybe spend yours with your family instead of on  obsessing over mine?’ she tweeted on Saturday.

On Sunday, Trump retweeted a tweet from a supporter who wrote that ‘millions of Americans truly LOVE President Trump, not McCain.’

John McCain died at the age of 81 after battling brain cancer. He made explicit his desire that President Trump not attend his funeral, and also dis-invited his 2008 running mate, former Alaska governor Sarah Palin.

His beef with President Trump dates at least back to the 2016 presidential campaign, when Trump criticized him for being taken prisoner in Vietnam.

‘He’s not a war hero,’ Trump said in July 2015, sarcastically quipping: ‘He’s a war hero because he was captured.’

Then, he added, ‘I like people that weren’t captured.’

Lady 'deliberate terrorist assault on Atlanta hospital because of remedy they gave her and mom'
Female Harvard student is ordered to move out of apartment after MAGA hat made roommates suspicious
Girl, 17, covers eyes while driving and crashes pickup truck while attempting 'Bird Box Challenge'
Teens who spend more time on social media suffer worse depression
Anti-virus pioneer John McAfee holes up in London just days after Caribbean authorities arrested him
Ohio teenager, 18, who 'supported mass shootings' arrested at a home filled with guns and ammo
Moment a Brazilian singer is forced to stop her show after losing her balance and falling backwards
Fotis Dulos's family want his trial to continue despite him being dead