A shoplifter who broke the back of a supermarket worker before her getaway car rammed through an angry mob has been jailed for more than three years.

Lucy Turner, 32, sent Danielle Wood rolling over the bonnet of the car, into the passenger wing mirror and onto the ground, fracturing her third vertebrae.

Footage went viral of the blue Citroen C3, which was by then being driven by a male accomplice, as it rammed its way out of Tesco in Rickmansworth just before .

Lucy Turner, 32, (right) sent Danielle Wood (left) rolling over the bonnet of the car, into the passenger wing mirror and onto the ground, fracturing her third vertebrae

The shocking video showed members of the public trying to stop the hire car, shouting: ‘Stop’ and ‘Get out. Get out of the car.’

But the driver sped and swerved his way out of the car park.

St Albans crown court heard Turner’s accomplices, a man and a woman who are both on the run, had tried to steal £174 worth of alcohol.

They were stopped and the Tesco store manager pushed shopping trolleys to block the car’s exit.

Tesco worker Ms Wood, 26, was assisting in the road block when she saw the car, travelling at speed towards her colleague.

She shouted to him and moved onto the walk way towards parked cars, but was struck.

Ms Wood said: ‘I was petrified I thought I would be wiped out. I was in agony. I knew I had broken my back. I was screaming ‘My back, my back!’

She was taken to Watford General Hospital and, nearly 3 months after being hit, still wears a brace.

In a victim personal statement, Ms Wood, who has a 5-year-old son, said: ‘It happened two days before Christmas. It ruined Christmas for me and my family. I was released from hospital on Boxing Day.’

She said she has not had surgery as doctors are waiting to see if the break will heal naturally. At this stage, she does not know how long she will be in the brace, which she has to wear when out of the house. 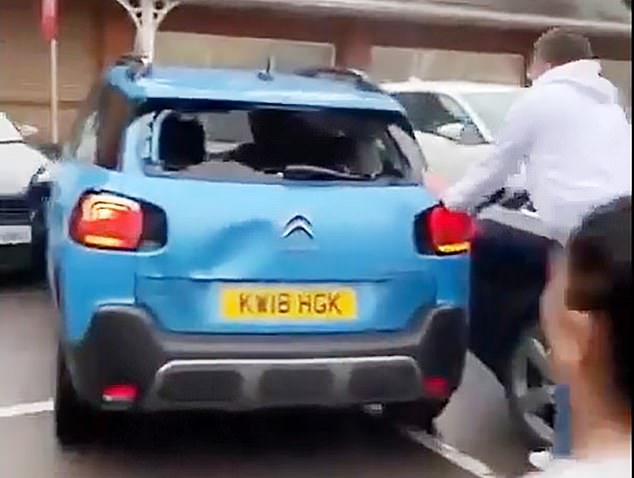 Footage went viral of the blue Citroen C3, (pictured) which was by then being driven by a male accomplice, as it rammed its way out of Tesco in Rickmansworth just before Christmas

Ms Wood said she had been hoping to start training as a manager at the store, but had now lost the ability to bend and do basic tasks. ‘I fear I will always have pain. It hurts emotionally and physically.’

She said she and her partner had stopped planning their wedding.

Turner, of Borehamwood, appeared for sentence having earlier pleaded guilty to two charges of theft, attempted theft, causing serious injury by dangerous driving, using a vehicle without insurance, driving while disqualified, being the driver of a vehicle that failed to stop and failing to report a collision.

Prosecutor Richard Jones said: ‘On 23 December Ms Turner and two others set out to steal from shops. She was the getaway driver.

‘The modus operandi was to seize goods of high value and get out through the emergency exit.’ 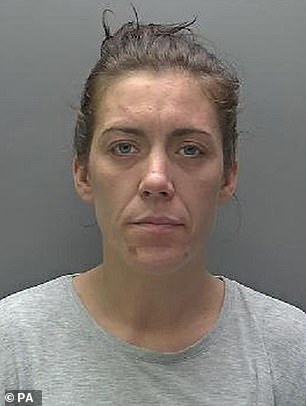 Turner (pictured) had previous convictions for driving while disqualified, shoplifting and common assault

They first went to the Tesco store in Pinner, Middlesex and stole £600 of alcohol. The accomplices escaped through the emergency exit and got into the car, driven by Turner.

The man and the woman tried to steal the alcohol from the Rickmansworth store but could not get out through the emergency exit. They left by the main entrance where they were intercepted by staff, said Mr Jones.

One witness heard the noise of a car revving loudly as if its tyres were stuck in mud. It drove the wrong way down the one way system at an estimated speed of 35 to 40 mph, hitting Ms Wood. At that stage the man was seated in the back.

Turner hit a grey Toyota MPV and then swapped positions with the man, who rammed their way out of the car park.

The next day, December 24, Turner stole two packets of baby formula from the Co-op in Borehamwood.

Chantelle Stocks, defending, said Turner developed a drug addiction after the death of her son in 2008. She said she had met the other two involved in a crack den.

Turner, who had sobbed in the dock as Ms Wood read out her impact statement, had written a letter of remorse to the judge.

She had previous convictions for driving while disqualified, shoplifting and common assault.

Jailing her, Judge Caroline Wigin said: ‘You were driving in a supermarket car park crammed with shoppers in the pre-Christmas period.’

She said Turner had a long-standing addiction to cocaine and heroin and had caused serious injury to Ms Wood ‘in the furtherance of crime.’

Referring to the victim, the judge said: ‘Every aspect of her life has been affected.’

In addition, Turner was banned from driving for 4 years 6 months.

Britain's smallest baby who weighed the same as a COKE CAN survives against the odds
This Morning viewers 'heartbroken' over woman left with brain damage after allergic reaction
Britons are warned against all but essential travel to Sri Lanka by Foreign Office
Prince William kicks off day two of his New Zealand tour visiting Christchurch massacre sites
BoJo's charm offensive: Would-be PM launches his bid for the top job by meeting 200 fellow Tory MPs
British traveller has 'bits of a stingray' removed from her foot
White House staff 'restricted access to records of Trump's calls with Putin and Saudi Crown Prince'
Everton star Andre Gomes speaks for the first time since horror injury in clash with Tottenham