is not due to become a father until next month – but yesterday his cousin Zara Tindall showed her faith in his parenting abilities.

She made him godfather to her baby Lena at her christening at St Nicholas Church in Cherington, Gloucestershire.

Harry was joined at the low-key ceremony by his wife, Meghan, who is expecting their first child in late April and whose growing baby bump was covered under a fashionable vintage-style buttoned coat. 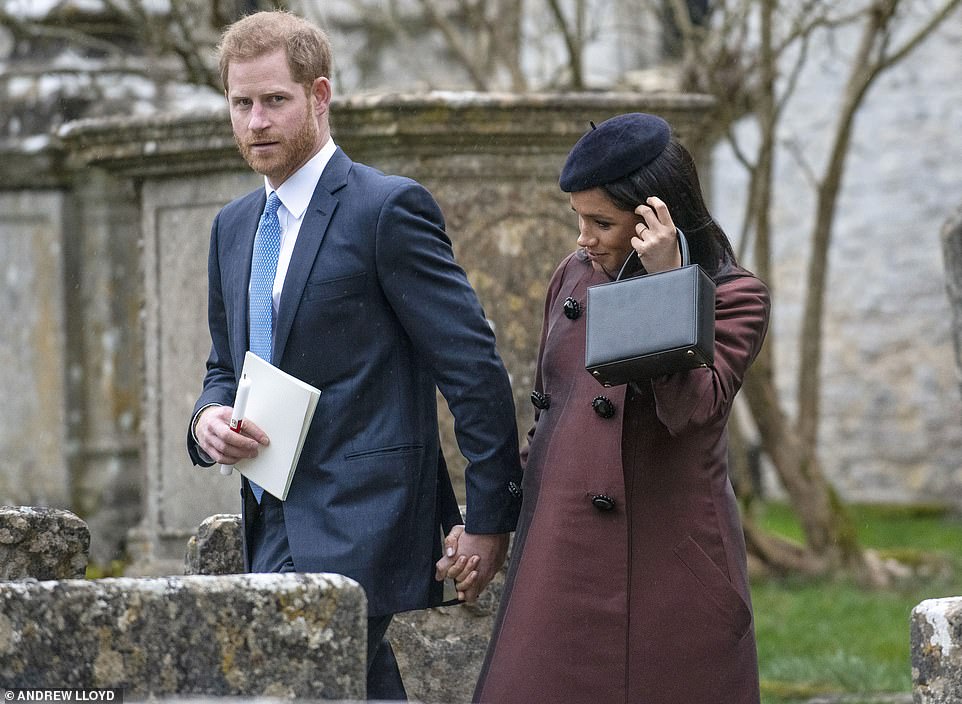 Prince Harry and a heavily-pregnant Meghan attended the christening of ten-month-old Lena Tindall at St Nicholas Church in Cherington, Gloucestershire 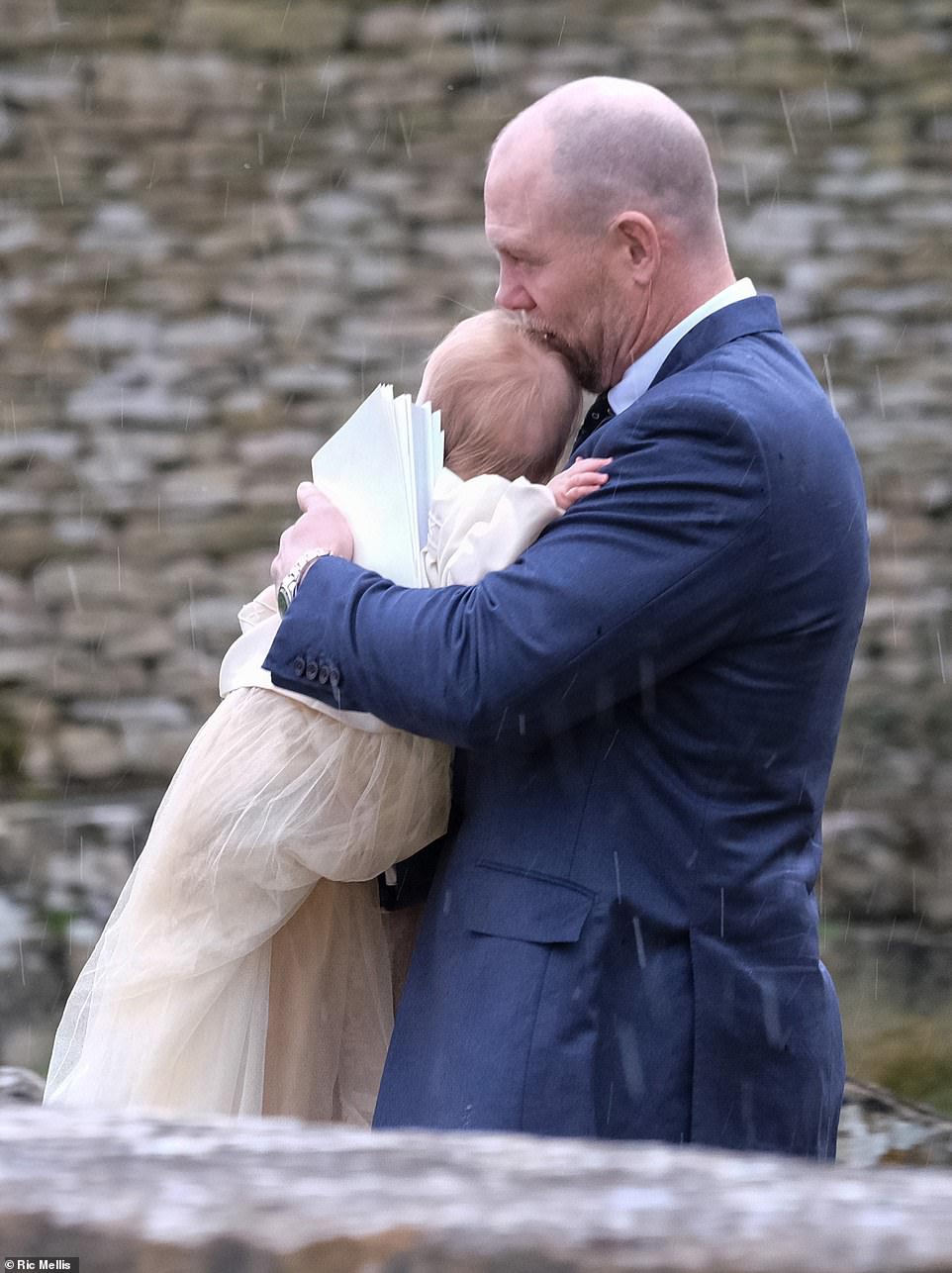 Safe in Daddy’s arms: Mike Tindall carries Lena from the church in spring showers after the low-key service 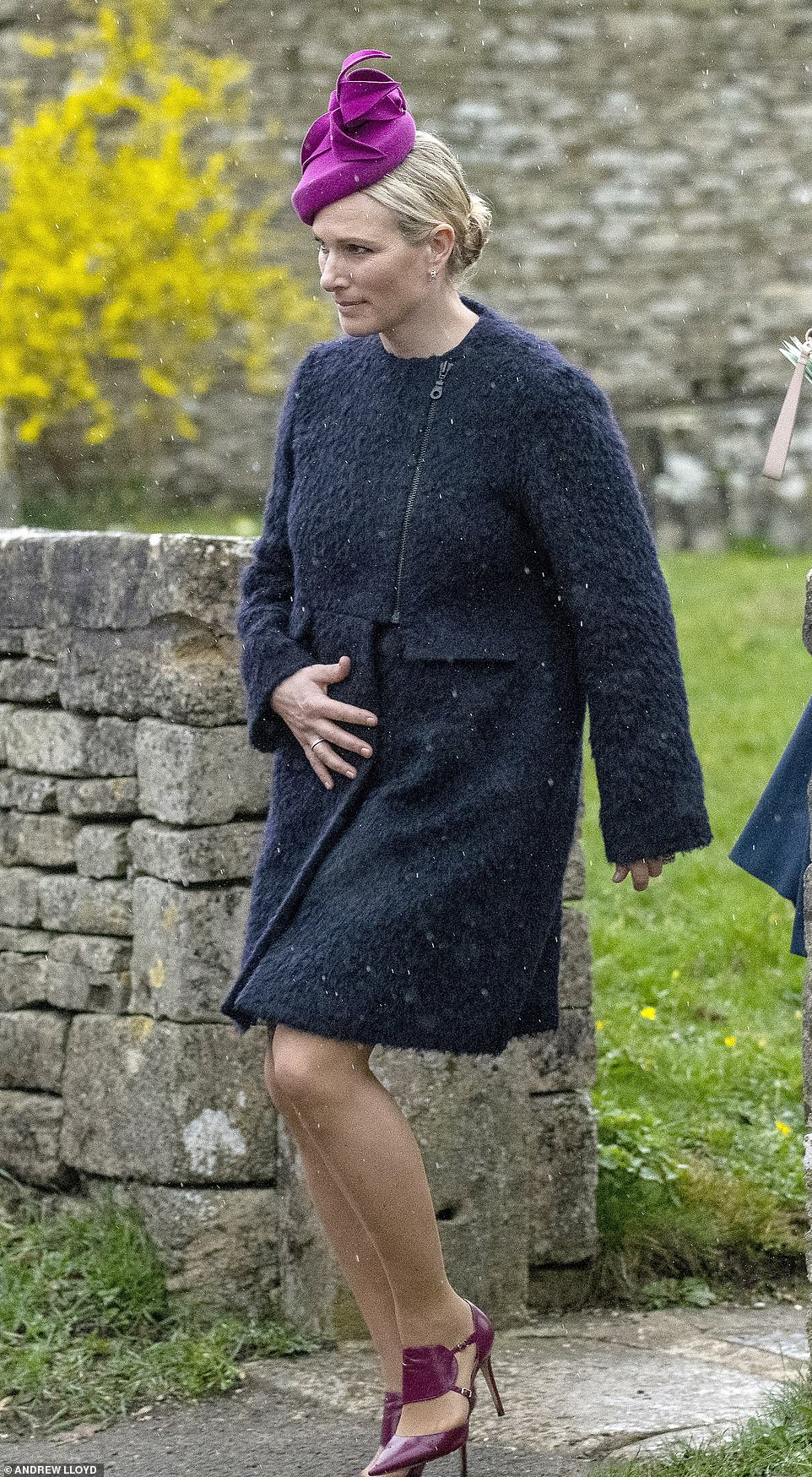 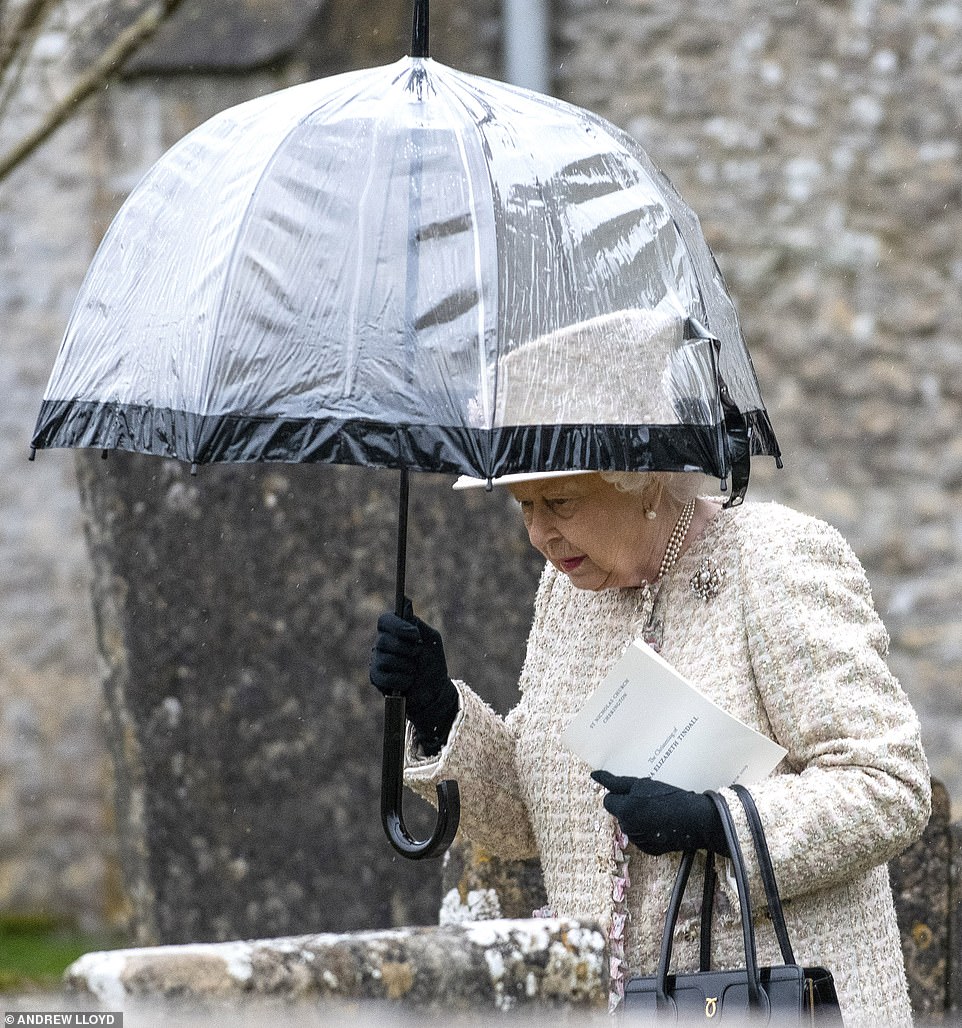 The Queen, the great-grandmother of Lena, carried her umbrella from the church as she braved the Gloucestershire weather

The event was also attended by the Queen, whose presence will have surprised some royal-watchers because she did not attend the christening of the Duke and Duchess of Cambridge’s third child, Prince Louis.

The Queen held her own umbrella as she left the Grade-I listed church during a spring shower.

Nine-month-old Lena, her youngest great-grandchild, was christened at the same church where her sister Mia and cousin Isla Phillips were blessed previously.

She was carried from the service in her christening gown by her father, former England rugby player Mike Tindall. Zara’s parents Princess Anne and Captain Mark Phillips, who divorced in 1992, were also there but there was no sign of Prince Philip or the Duke and Duchess of Cambridge. 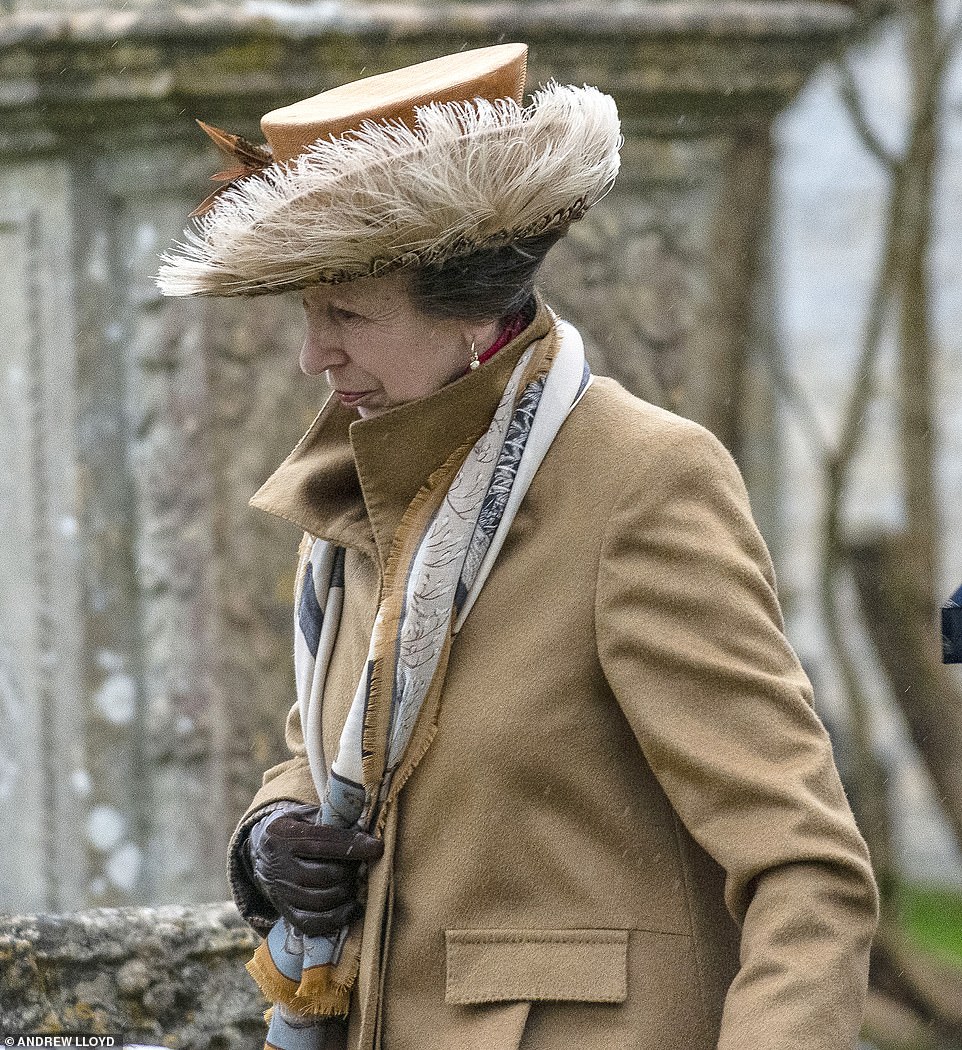 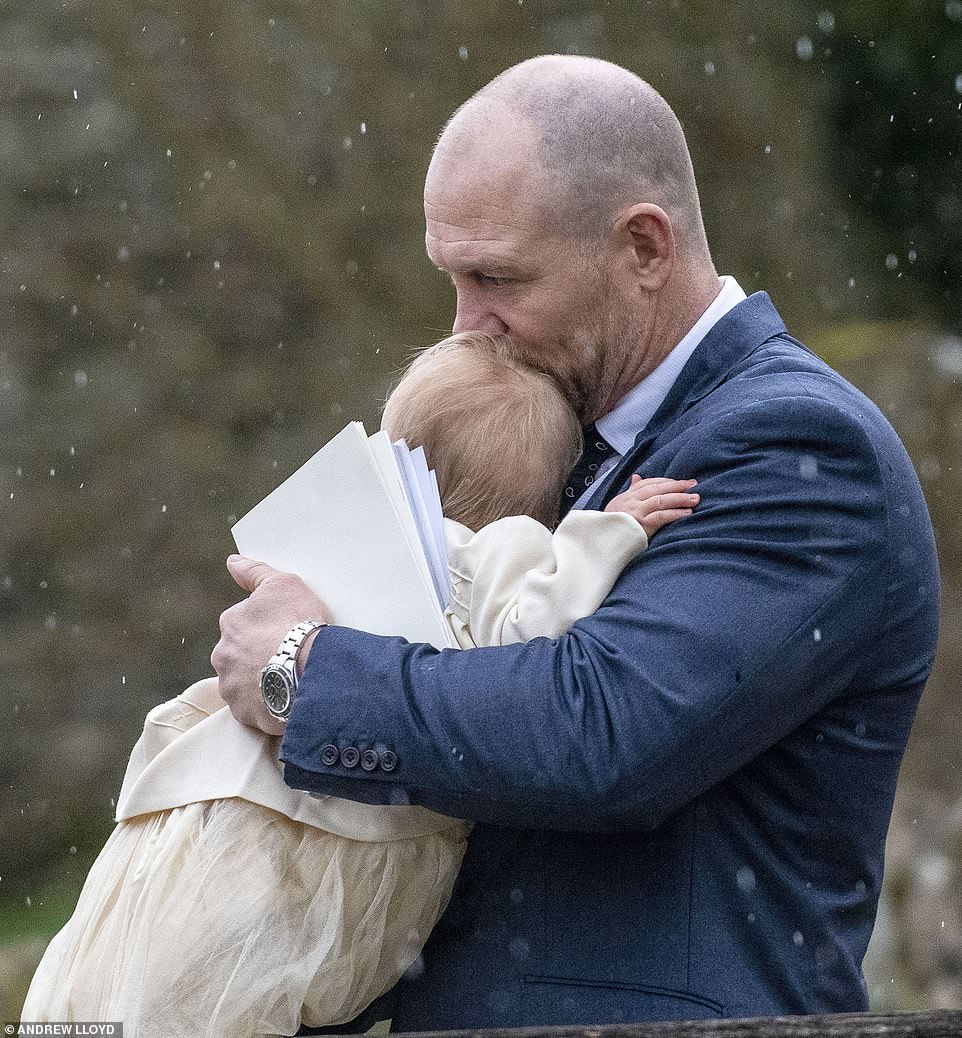 Lena was carried out of the service in her christening gown by her devoted father, the former England rugby international Mike Tindall 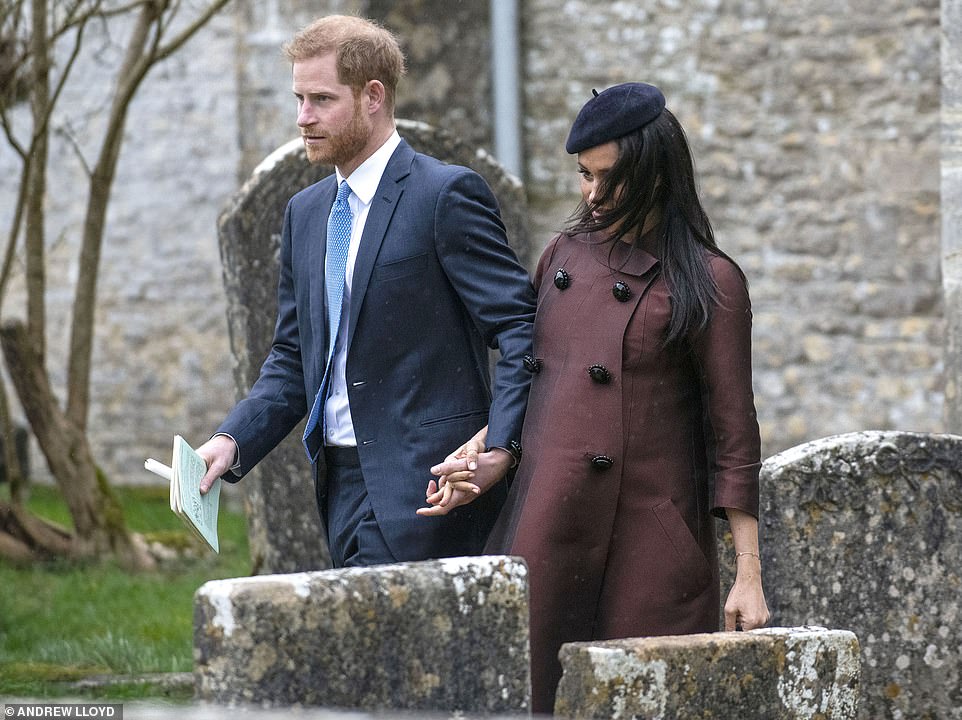 Meghan, who is expecting her first child in late April, covered her bump under a vintage-style buttoned burgundy coat 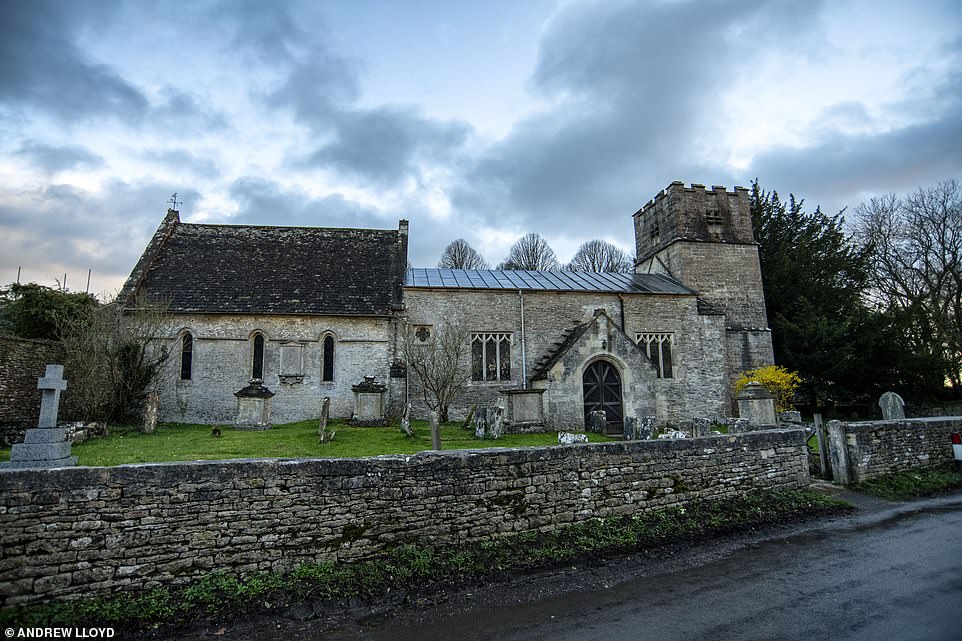 The Rev Dr Gerald South, the priest in charge, said the service at St Nicholas Church was ‘lovely’ but declined to comment further

The Rev Dr Gerald South, the priest in charge, said the service was ‘lovely’ but declined to comment further.

An onlooker said: ‘There were between seven and ten police cars discreetly parked in a farmyard on the edge of the village, and we saw a few bobbies dotted around the village. But considering the number of royals in attendance, it was a surprisingly low-key event.’

Parish councillor Kate Gegg said she had attended morning service at the church and had no idea the royals were about to arrive. ‘The vicar didn’t say anything about it,’ she added.

Florida woman attacked by a HIPPO protecting her calf on dream Zimbabwe vacation
Michael Avenatti dodged tax for a DECADE - splashing hundreds of thousands of dollars, IRS say
These long-suffering wives came home to cheeky notes left by their husbands
Friends are aghast over The View exposé that depicts ailing Barbara Walters as a cutthroat
Skydiver plunges 2,600ft to his death when BOTH his parachutes failed to open
Video shows jailed son of ex-Real Housewives star attacked by an inmate wielding razor blades
Alabama cops help a disabled Gulf War veteran who was WALKING nearly 100 miles to his doctor
Prince Andrew at Ascot races with Ghislaine Maxwell and Jeffrey Epstein in never-before-seen photos