Jeremy Corbyn has indicated he could launch a fresh bid to oust Theresa May if her Brexit deal is rejected by MPs for a third time.

The Labour leader said it would be ‘appropriate’ to table another confidence motion in the Government at that point.

Mr Corbyn also indicated that his party could back an amendment calling for a referendum on a Brexit deal, although he would not set out which side he would be on in another public vote. 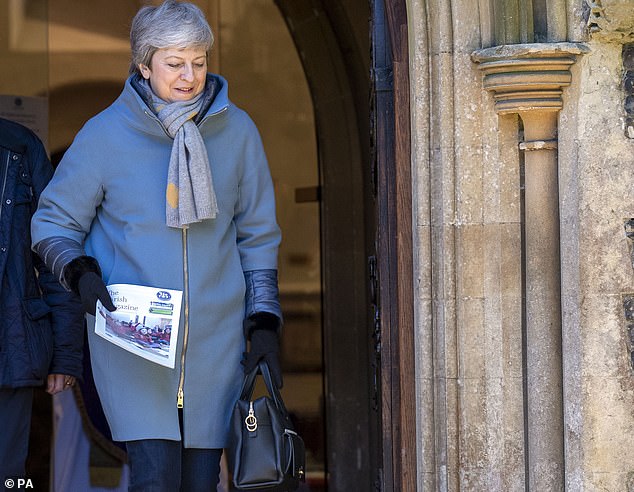 The Labour leader said Theresa May’s Brexit deal would cause ‘enormous’ economic harm to the UK. Mrs May is seen at church in her constituency today

Appearing on Sky News’ Sophy Ridge On Sunday, he said: ‘The Government is apparently going to bring its proposals once again to Parliament this week. I suspect they will be defeated again.

‘The whole process they are doing is running down the clock. 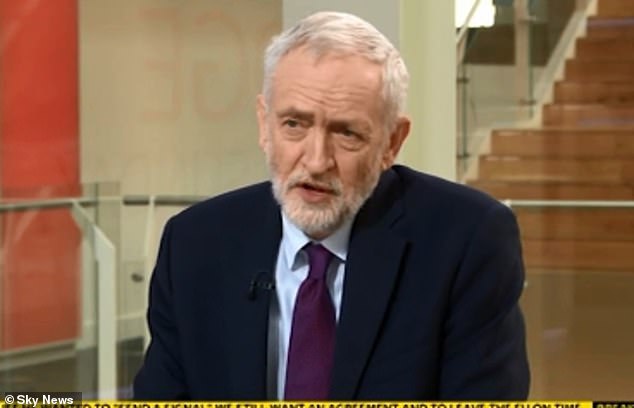 Mr Corbyn told Sophy Ridge on Sunday: ‘We are not supporting Theresa May’s deal at all because we think it’s a blindfold Brexit which will actually do enormous damage to our economy’

‘I think at that point a confidence motion will be appropriate. At that point we should say there has to be a general election so the people of this country can decide ‘do they want a Labour government investing in people’s communities, dealing with inequality, injustice and having a relationship with Europe that protects jobs and guarantees our trade for the future?”

Brexit: What happens next?

MPs twice rejected Theresa May’s Brexit deal. They also voted against leaving with no deal, and now voted in favour of a delay.

What will happen next?

MPs have supported a delay, so May will have to request an extension to Article 50 from the EU.

Could Brexit be delayed?

If other member states agree to it, Brexit will be postponed, but May has said that this should be for no longer than three months.

If, however, MPs do not support her deal, she warned that the extension could be far longer.

Could Brexit be stopped?

May has warned this is a possibility. While she will not revoke Article 50 herself, she has warned political chaos could see the Government replaced by Jeremy Corbyn or another pro-Remain administration.

Will the Prime Minister face a motion of no confidence?

It is possible. Labour leader Jeremy Corbyn has insisted he will only call another vote of no confidence if he has a chance of winning – but in January Mrs May precipitated one herself.

Will May just resign after a second defeat?

Unlikely but not impossible. Defeat would be another monumental blow to the PM’s political authority.

Will there be a general election?

There are mounting calls for one. Tory MP Charles Walker said yesterday if the House could not pass the deal, the current Parliament probably needs to be replaced so a new Government can be formed to tackle Brexit.

One of the advantages of an election is it would be much quicker to organise and resolve than a second referendum.

Could there be a second referendum on Brexit?

There are mounting demands for a new public vote – but probably not currently a majority in the Commons for it.

A new referendum would take at least six months to organise and run. This could be optimistic as there is no consensus over what the question might be.

Pressed on whether a defeat on the third meaningful vote would be the trigger to launch a motion he said: ‘We will obviously decide the exact moment.’

Mr Corbyn stressed that Labour was ‘not supporting Theresa May’s deal at all because we think it’s a blindfold Brexit which will actually do enormous damage to our economy’.

But he indicated that the party could officially back an amendment tabled by backbenchers Peter Kyle and Phil Wilson who have put forward a plan to support the deal on the condition it is put to a referendum.

‘We have obviously got to see the wording of it,’ Mr Corbyn said.

Asked if he was ‘enthusiastic’ about a referendum, Mr Corbyn said: ‘I’m enthusiastic about getting a deal with Europe which guarantees our future trading relationship and protects job and industries in this country.

‘I do think people should have a choice on that.’

Challenged on whether he would vote Remain in a referendum, Mr Corbyn said: ‘It depends what the choice is in front of us.

‘If we have got a good deal in which we can have a dynamic relationship with Europe, which is all the trading relationship and so on, then that might be a good way forward that unites the country.’

Repeatedly challenged on whether he wanted to leave the EU Mr Corbyn said: ‘We want to have a relationship with the EU of the type I set out and people will have a choice on that.

‘But there will be a credible choice in any referendum that Labour proposes.’

Mr Corbyn has written to MPs backing soft Brexit plans as well as supporters of a second referendum, inviting them for talks to find a cross-party compromise.

The Labour leader called for urgent meetings to find a ‘solution that ends the needless uncertainty and worry’ caused by Mrs May’s ‘failed’ Brexit negotiations.

He said Labour’s ‘credible’ plans would form the starting point for any discussions, but he was keen to find ‘common ground’ with supporters of other plans. 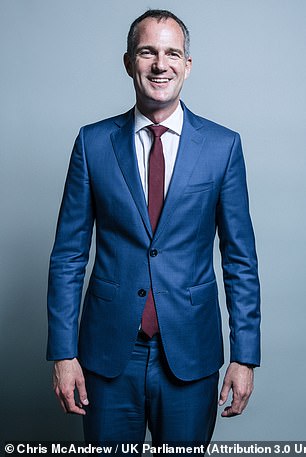 He indicated Labour could back an amendment pushed by backbench MPs Peter Kyle (pictured) and Phil Wilson which could allow a deal to pass the Commons, on the condition it is put to a referendum

Mr Corbyn said: ‘Labour has set out credible options as to how we propose to break the deadlock and avoid a disastrous no-deal.

‘This includes putting forward an alternative Brexit plan with a permanent customs union, single market deal and dynamic alignment on rights and protections.

‘We have also said that we would support a public vote to prevent damaging Brexit proposals being forced on the country.

‘We would obviously use that position as a starting point for any discussions, but we would like to hear about the plans you are advocating, and we are keen to see if there is scope to find common ground between our respective proposals and to work together to break the impasse.’

Labour’s Baroness Chakrabarti offered her support to Mr Corbyn during an appearance on the Andrew Marr Show, claiming he had shown more leadership over Brexit than Mrs May.

Former Royal navy officer's 230-year-old home goes on sale for £120,000
What happens to the body when you drink more than one glass of wine a day
Fans’ fears for Johnny Vegas as the comic ‘drunkenly collapses on stage'
Google's 3,600 staff in the UK earned an average of £226,000 EACH in bumper payout last year
Britain awaits EU election results as it's revealed turnout was up to 38%
Aristocrat 'does a Prince Harry' by marrying US actress who even starred in the same show as Meghan
Jair Bolsonaro says Europe has 'nothing to teach' Brazil about protecting the environment
One of Prince Louis's first words was 'Mary Berry'