Since then Courtney Love has continued to make music, forged an acting career in Hollywood and launched a clothing line.

And on Sunday night, the 54-year-old was among the celebrities who attended The Daily Front Row Fashion Awards in Beverly Hills. 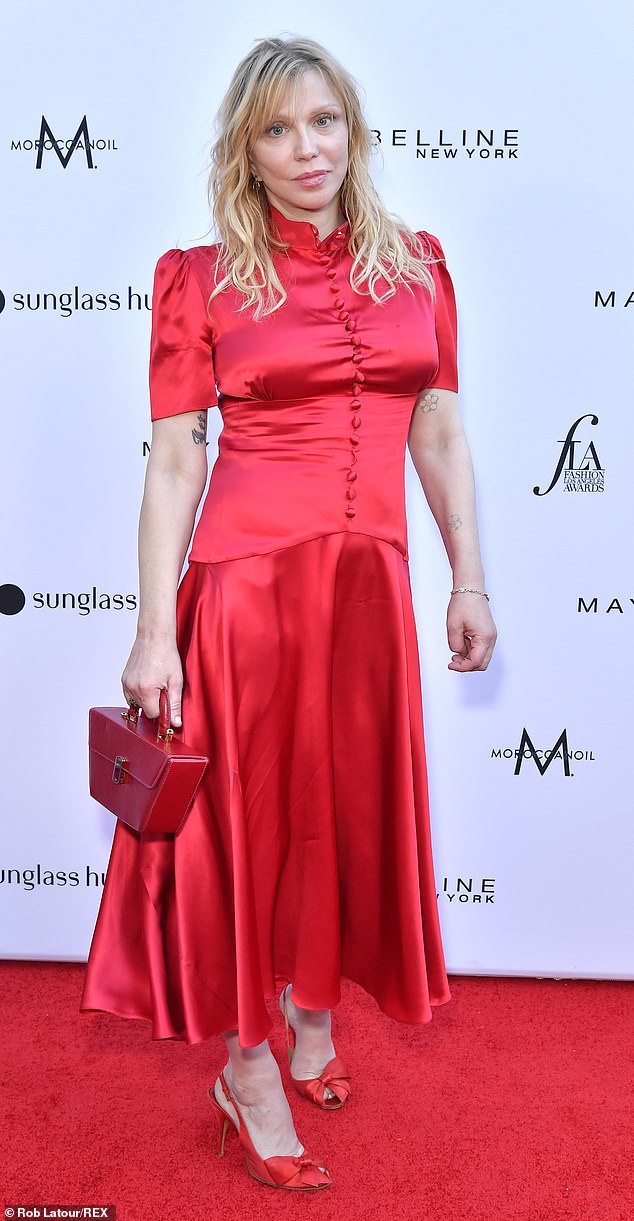 Courtney opted to match the red carpet in a red dress with a mandarin collar and buttons down the front of the bodice.

The number had short sleeves and an ankle-length skirt.

She added red sandal heels with bows on the toe and carried a red purse.

The Hole frontwoman left her shoulder-length blonde hair loose and wore it in a tousled style. 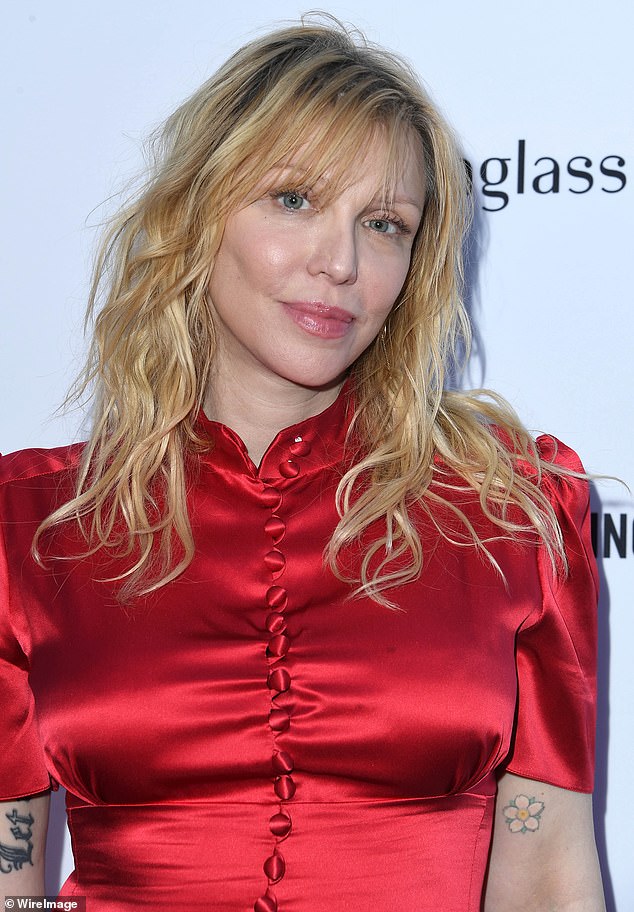 Celebrity: The 54-year-old musician and actress left her shoulder-length blonde hair loose and wore it in a tousled style

Coordinated look: Courtney wore a red dress with a mandarin collar and buttons down the front of the bodice. The number had short sleeves and an ankle-length skirt 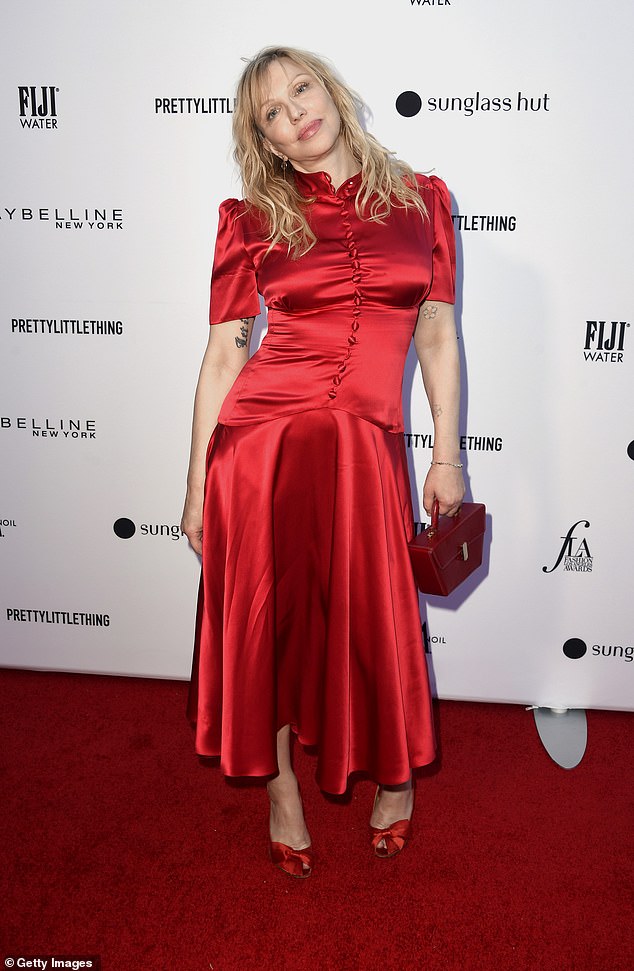 Looking good: She added red sandal heels with bows on the toe and carried a red purse

We love the flattering length and sleeves on this dress, which features a high neck, button detailing down the front and an almost corset-style waist panel. Bravo to her stylist Anatascia Walker!

It’s available to buy now at MATCHESFASHION.COM so click (right) to add it to your basket if you want to stand out from the crowd of LBDs at your next big event.

Or copy Courtney for less with the help of our edit below. This dress by Forever New at Asos will do the trick!

Also on the VIP guest list for the event was Kate Hudson, who starred with Courtney in the 1999 comedy movie 200 Cigarettes.

Not only did the two enjoy a reunion; they also mirrored each other in style.

Kate, 39, had opted for a figure-hugging long-sleeved red gown and also left her blonde hair loose.

The actress daughter of Goldie Hawn was honored at the event by the fashion publication as Kate Hudson as Fashion Entrepreneur. 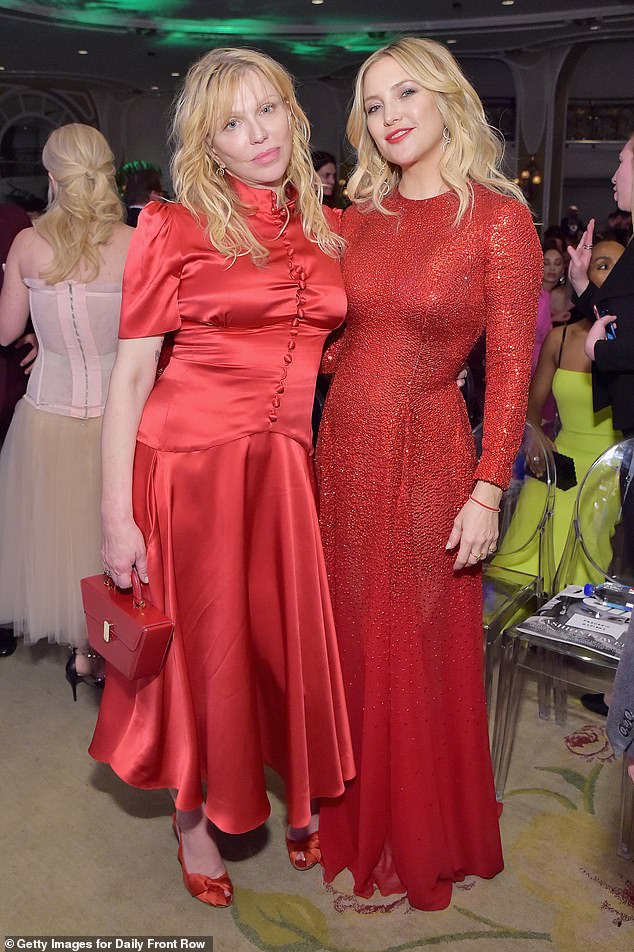 Snap: Courtney had a reunion at the event with Kate Hudson, with whom she starred in the 1999 comedy 200 Cigarettes. Kate, 39, also opted for red, choosing a long-sleeved gown 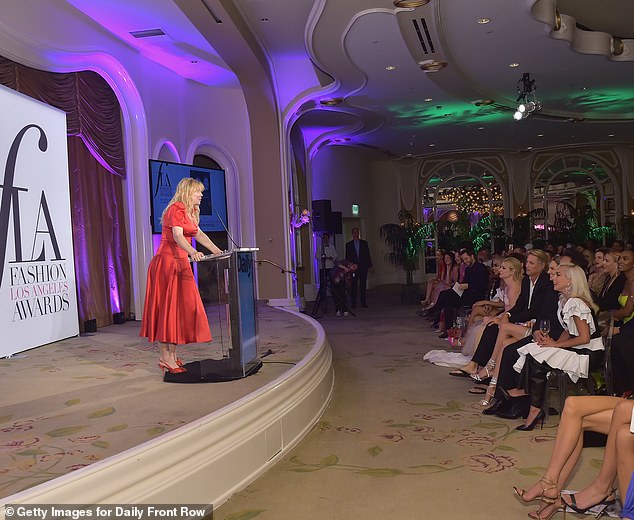 During the show, Courtney took to the stage to make some remarks as guests including Lady Gaga looked on 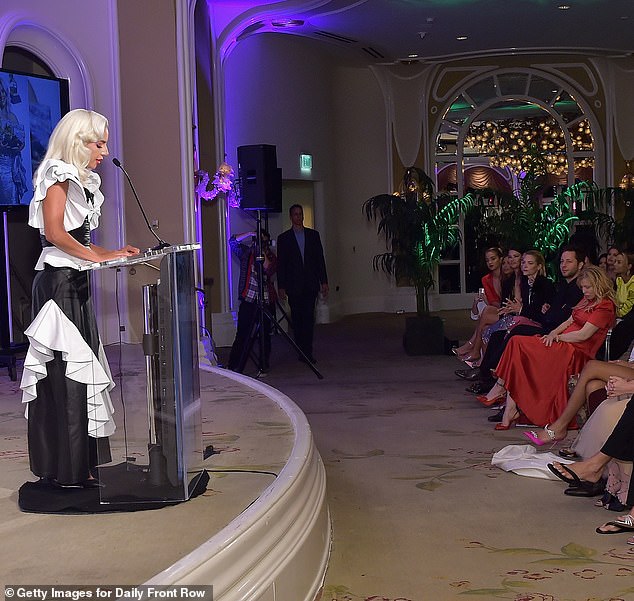 Gaga’s turn: The singer took to the stage while Courtney sat front row

Mark Wright teaches Khloe Kardashian tips on how to speak in an Essex accent
Sharon Osbourne confesses that she DRUGGED husband Ozzy
Caroline Flack shares first glimpse of her Love Island wardrobe
Brittany Cartwright flaunts cleavage in denim romper at Stagecoach with fiancé Jax Taylor
Love Island: Molly-Mae exclaims 'it's f***ing huge' as she gets steamy in the sheets with Tommy
Princess Beatrice dances along to Celine Dion with sister Eugenie
Kim Kardashian reveals she got pee 'all over herself' as she struggled while wearing shapewear
Katie Price shares family photo after ex's 'cocaine romp' claims