They look like something from a horror movie: full-grown trees creepily encased in artificial netting — a macabre symbol of mankind’s shameful attitude towards nature.

But these huge plastic draperies are very much a reality.

They are designed to deprive birds of nesting sites — and in the process speed the building of new houses and flats.

Such plastic netting on trees and hedgerows is the latest depressing example of humans prioritising their needs over those of wildlife. Birds’ habitats are being cynically reduced so that greedy developers, cashing in on the country’s shortage of housing, outflank a law that makes it an offence to destroy or disturb nesting sites of wild birds. 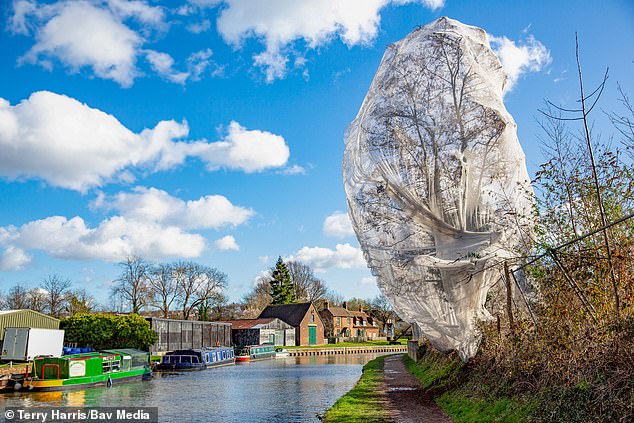 If they hope to avoid work on a new housing estate being delayed until the end of the nesting season, birds must be deterred from nesting there in the first place. Hence these great swathes of plastic netting hung over trees and hedgerows earmarked for felling to make room for new developments.

Is there any more horrible symbol of man’s treatment of his fellow creatures?

While we quite rightly are appalled that people in Mediterranean countries net thousands of songbirds, leading to the near- absence of many nesting species of migratory birds, a version of this evil custom is happening across Britain.

At this time of year, before the nesting season begins, developers are busy swaddling trees in large sheets of plastic netting — even on sites for which planning permission has yet to be granted.

Troublingly, this netting can sometimes have the opposite of the intended effect. Instead of protecting birds by stopping them from using soon-to-be axed trees as homes, poor anchoring or tearing caused by high winds allows birds to get trapped inside these vast cocoons.

Last week, Alan Stuart, a retired car worker, was furious about the sight that greeted him near to his home at the entrance to a proposed housing development near Choppington in Northumberland. ‘There were seven trees wrapped in this stuff and a dead bird [thought to be a blue tit] was caught in one,’ he says. ‘I also saw a sparrow and wood pigeon caught inside — though luckily they managed to escape. A hedge about 20 metres long had also been covered. 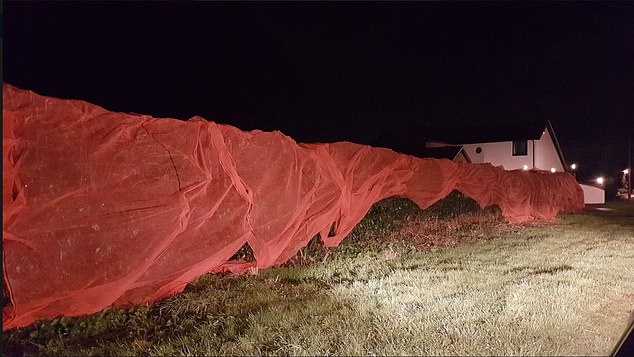 Birds’ habitats are being cynically reduced so that greedy developers, cashing in on the country’s shortage of housing, outflank a law that makes it an offence to destroy or disturb nesting sites of wild birds

‘It is absolutely disgusting. Even if they have planning permission, the developers could easily start work and avoid the trees by using another access route. It’s a pointless exercise that ends up killing birds, rather than protecting them. It’s the first time I’ve seen it in this area, and I hope the last.’

Conservationist Chris Packham, co-presenter of the BBC’s Springwatch series, has joined the battle against this plastic invasion of the landscape.

After seeing the cocooning of a hedgerow by developers building 40 homes near Winterton in north Lincolnshire, he took to Twitter, describing it as a ‘shameful indictment of mismanagement and a brutal ignorance of how to look after the countryside’.

The hedgerow is normally inhabited by endangered hedgehogs and bats, as well as nesting birds. Packham went on: ‘It’s so utterly abhorrent that I feel sick. What has become of the agencies who should protect life from this? Is everything spent? If I were there, I would rip those nets down.’

Councillor Paul McCartan, of Winterton Town Council, said the netting had been used to ensure that building work could start without delay if a planning application in the pipeline was passed by North Lincolnshire Council. Otherwise, work would have to be put off until the autumn. 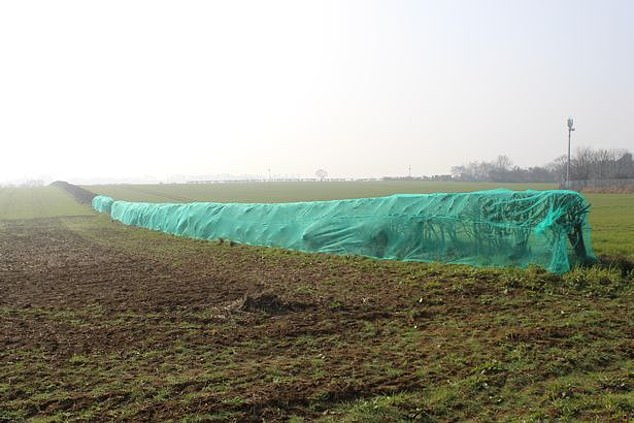 After seeing the cocooning of a hedgerow by developers building 40 homes near Winterton in north Lincolnshire, Springwatch’s Chris Packham took to Twitter, describing it as a ‘shameful indictment of mismanagement and a brutal ignorance of how to look after the countryside’

Cllr McCartan added: ‘This shows a high level of arrogance because before a final decision has even been made, the developers have gone in thinking they are going to win and consequently put up the netting. It’s an example of developers riding roughshod over local communities.’

The same is happening across the country and comes at a time when, for other reasons, trees are being wantonly chopped down by councils. An estimated 110,000 have been felled in just three years. Sheffield has axed 10 per cent of the trees it is supposed to look after. Councils argue that they were either dangerous, dying or had roots that were damaging pavements and roads.

In Chester, the encasing of hedgerows destined for uprooting as part of a new development has this week sparked more criticism.

Redrow Homes and Taylor Wimpey have put up the netting at their joint site on Wrexham Road where they have been granted permission to build 1,270 homes on former Green Belt land. 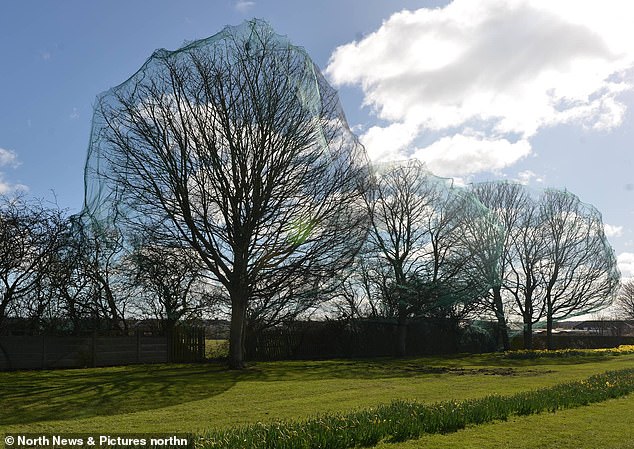 Alan Stuart, a retired car worker, was furious about the sight that greeted him near to his home at the entrance to a proposed housing development near Choppington in Northumberland. ‘There were seven trees wrapped in this stuff and a dead bird [thought to be a blue tit] was caught in one’

Environmental campaigner Andy Scargill, a critic of the scheme, says: ‘At a time when there are growing concerns in the UK over the numbers of birds, small mammals and invertebrates, the developers are destroying their habitats on this site. This is utter madness.’

In Ely, Cambridgeshire, nets have been put over trees in the grounds of Highfield Academy school pending building work.

Sometimes, developers draw back under pressure.

The writer Sir Philip Pullman was among those who reacted to the ‘gift-wrapping’ of trees on a site for new student accommodation near the River Wey in Guildford, Surrey. The author of His Dark Materials described the surreal scene created by the netting as ‘ugly, wicked and destructive’.

Developer Sladen Estates relented and stripped off the netting after 48 hours when it was pointed out that building work was not scheduled to start until December and that no harm would be done by allowing birds to nest as normal.

The novelist and nature writer Melissa Harrison, who publicised Sladen’s actions, said: ‘People in the UK are fast waking up to the stark reality of species loss and plummeting natural abundance. 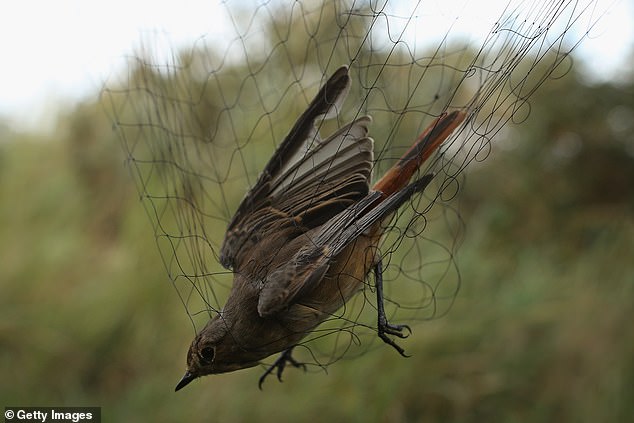 Under the Wildlife and Countryside Act 1981, it is an offence to ‘take, damage or destroy’ the nest of any wild bird

‘The law rightly protects nesting birds; to stop them building nests in the first place is part of an old-fashioned, exploitative attitude to nature.’

Under the Wildlife and Countryside Act 1981, it is an offence to ‘take, damage or destroy’ the nest of any wild bird.

Gareth Cunningham, the RSPB’s head of nature policy, says: ‘We cannot keep trying to squeeze nature into smaller and smaller spaces, or demanding it fits in with our plans.’

He says the charity is talking to the Government as part of an assessment of what needs to happen over the next 25 years to stop the country’s wildlife from continuing to vanish at an alarming rate.

‘In the UK, we have lost more than 40 million birds in the past 50 years. So, we are looking to the Government to not just ask planners and developers to think about whether it is necessary to remove the trees and hedgerows that are vital for supporting our wildlife, but to ensure that developers replace what they take away.

‘If the work is necessary, then the use of netting could be avoided by tree and hedge removal being completed outside of nesting season.’ 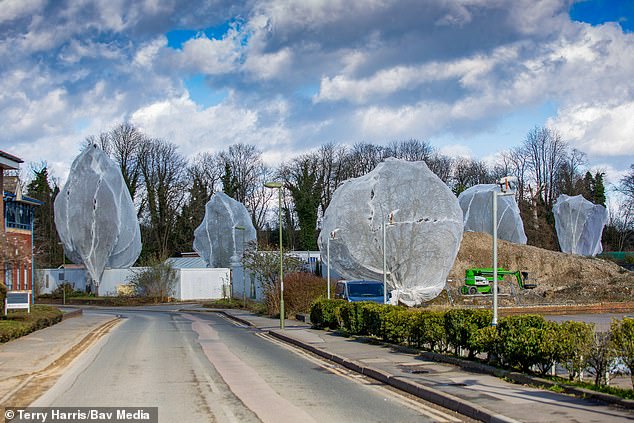 Nets beside the Wey Navigation canal. Gareth Cunningham, the RSPB’s head of nature policy, says: ‘We cannot keep trying to squeeze nature into smaller and smaller spaces, or demanding it fits in with our plans’

For its part, the RSPCA receives about 2,600 calls every year about animals caught in netting, though many of these relate to sports netting, which can easily ensnare foxes. There are also examples of birds being trapped by netting on buildings designed to deter nesting and prevent them from blocking gutters.

Last summer, damaged netting on the Exchange Buildings in Newcastle had to be replaced after the deaths of endangered kittiwakes which had become entangled in what Chris Packham describes as ‘wildlife traps’. The RSPCA warns that it is impossible to secure a hedge completely, allowing birds to nest behind it. In fact, netting may be appealing to nesting birds as it can stop predators reaching the nest.

A spokesman says: ‘Adult birds may be savvy enough to avoid the net, but juveniles may not. If the netting comes down to ground level, it could also catch small mammals, including hedgehogs.’

House-builders argue they are not the villains in this story, and that netting is meant to save birds by deterring them from nesting in places that are earmarked for destruction. They say they compensate for damage by planting more trees and shrubs than are lost during building work.

‘As we build the homes the country needs, the industry is committed to bio-diversity, acting to protect birds and providing an increase in the number of trees.’

Partner Construction, which is responsible for the Winterton housing development in Lincolnshire, criticised in Mr Packham’s tweet, says it cloaked the hedge because planning permission was imminent, and it wanted to minimise disruption to nesting birds if it had to be torn up. The covers, it says, were installed by expert ecologists who checked to ensure it was free of nests.

A spokesman explains: ‘Rather than rip out the hedge, which was an option, we took the environmentally responsible decision to net it. This means that if the scheme doesn’t receive approval, the hedge can be returned to its natural use.’ The company says that following controversy over the hedge, which it describes as of ‘low ecological value’, the netting was damaged by persons unknown. The resulting tears placed birds and other animals at more risk.

Regarding the Chester site, Redrow and Taylor Wimpey, says: ‘We take our wildlife responsibilities very seriously and this action has been taken to prevent any birds from nesting in hedges that are scheduled for removal, thereby protecting the birds.

‘The nets have been properly installed by a specialist contractor and will be regularly checked by a qualified ecologist to ensure no birds or other wildlife are trapped.’

For bird-lovers such as Alan Stuart, however, the damage caused to the countryside by ugly, and sometimes lethal, plastic netting is too great to justify its widespread use. Man must sometimes put himself second to the environment, whatever the inconvenience caused to developers.