The toddler never stood a chance.

As his father and older brother played dead inside the Al Noor mosque, three-year-old Mucad Ibrahim got up and ran – straight into the path of white supremacist Brenton Tarrant, who squeezed the trigger of his military assault rifle.

Instantly cut down, Mucad died in his Somalian father’s arms. Heartbroken, his brother spoke of the little boy’s energy and playfulness, and how he ‘liked to smile and laugh a lot’.

Last night the death toll from the attacks had risen to 50, authorities said. A further 50 people suffered injuries in the mass shootings. 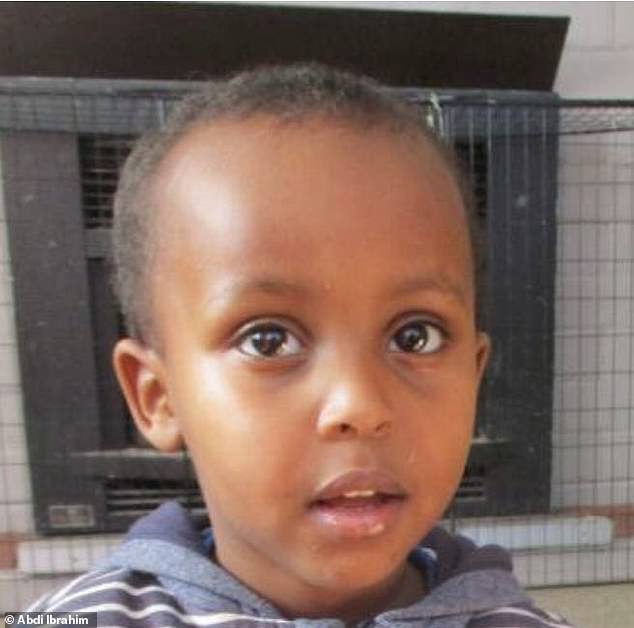 As his father and older brother played dead inside the Al Noor mosque, three-year-old Mucad Ibrahim (pictured) got up and ran – straight into the path of a murderous white supremacist 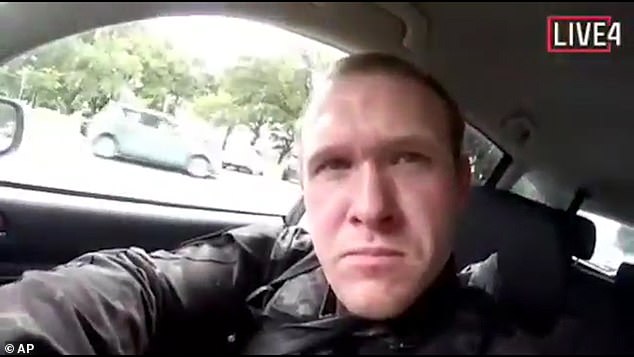 He was met by Brenton Tarrant, who squeezed the trigger of his military assault rifle and killed the youngster

It was, as everyone kept saying, the day New Zealand lost its innocence. But amid the soul-searing horror visited upon Christchurch on Friday, stories of extraordinary courage and self-sacrifice emerged, all recounted with characteristic Kiwi modesty. Save for the actions of one man, who brought the carnage to an end by chasing Tarrant out of a second mosque and attacking his car with a rifle, the death toll might well have been higher. Another man, 71, died in a burst of bullets as he flung himself over others to protect them.

Last night, after an image of the dramatic moment when Tarrant was apprehended by police appeared online, further details of the country’s worst ever mass killing emerged as:

– Tarrant, 28, smirked and made a ‘white power’ gesture in the dock as he was charged with murder;

– Two others remain in custody, including an unidentified woman;

– Doctors are battling to save the life of critically injured children, including a four-year-old girl who was shot in the head;

– Tarrant emailed his hate-filled ‘manifesto’ naming the mosques he was to attack to New Zealand’s Prime Minister shortly before his rampage began;

– It was reported that the mosque shooter may have stayed for ‘a few weeks’ in Britain during a visit to Europe two years ago. He also visited France, Portugal, Spain and Eastern Europe, where he went to Crusades battle sites;

– A man from Oldham who posted comments on social media supporting the massacre was arrested by Greater Manchester Police. 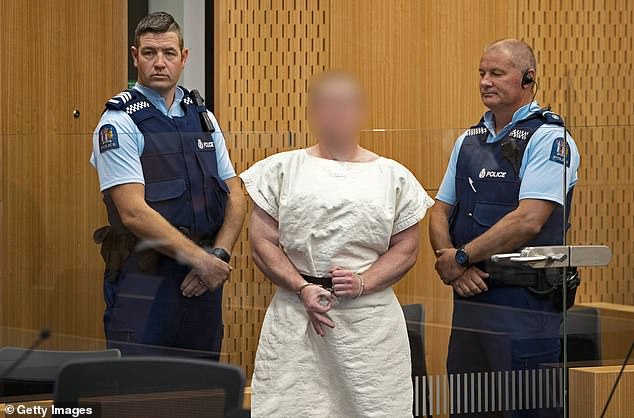 Using a helmet camera, Tarrant, an Australian, streamed live video of the killings on Facebook. Before firing his first shot at 1.40pm, he filmed his car journey, during which he listened to the British Grenadiers marching song.

Then casually walking towards the mosque, he was greeted with the words ‘Hello, brother’ by a worshipper.

From that moment Tarrant swung his weapon from side to side, firing wildly ‘as though playing a video game’. Less than six minutes later, 41 people lay dead. One man, Waseem Daraghmeh, 33, who was shot four times, cradled his critically injured four-year-old daughter, Elin, pleading for help.

Yesterday Mr Daraghmeh posted a video on Facebook from his hospital bed. ‘Please pray for my son, for me and for my daughter,’ he said softly. Mr Daraghmeh’s brother Sabri Daraghmeh said Elin remained ‘in the danger phase’. He explained that the family had moved to New Zealand from Jordan five years ago and that his brother had described it as the ‘safest place one could ever live in’.

The same sentiment was expressed over and over again among survivors yesterday.

Retired engineer Haji-Daoud Nabi, 71, who escaped the Russian invasion of Afghanistan and brought his family to New Zealand in the 1980s, was shot and killed as he tried to shield others.

His son Omar Nabi said: ‘He jumped in the firing line to save somebody else’s life and he has passed away. Your time is up but you’re helping someone else to live because they’re younger – their life has to go on.’

By 1.46pm, Tarrant was back in his car and on the move again, this time heading for the Linwood mosque across the city. Seven more people were killed there – an eighth died later in hospital. Many more would have died but for the bravery of 48-year-old father Abdul Aziz, who chased Tarrant outside when he returned to his car, apparently seeking more ammunition.

As his two youngest sons – aged 11 and five – beseeched him to come back, Mr Aziz threw a credit-card machine at the gunman, who fired in his direction.

Mr Aziz said he dodged between parked cars to avoid being shot. He then spotted a gun the attacker had dropped and picked it up. He pointed it and squeezed the trigger but it was empty. 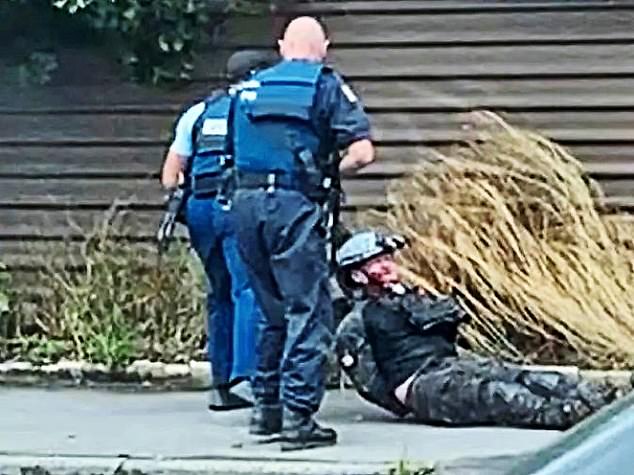 The moment the gunman was taken down: With weapons drawn, armed officers surround Tarrant moments after he was dragged from his car at the end of the rampage

Still, he pursued the killer. Mr Aziz, originally from the Afghan capital Kabul, said: ‘He gets into his car and I just got the gun and threw it… like an arrow and blasted his window,’ he said.

‘The windshield shattered, that’s why he got scared.’

He said the gunman was cursing at him, yelling that he was going to kill them all.

But he drove away and Mr Aziz said he chased the car down the street to a red light before it sped away.

Minutes later, police managed to force the gold Subaru from the road and drag Tarrant out at gunpoint. It was 36 minutes after the first shot was fired. 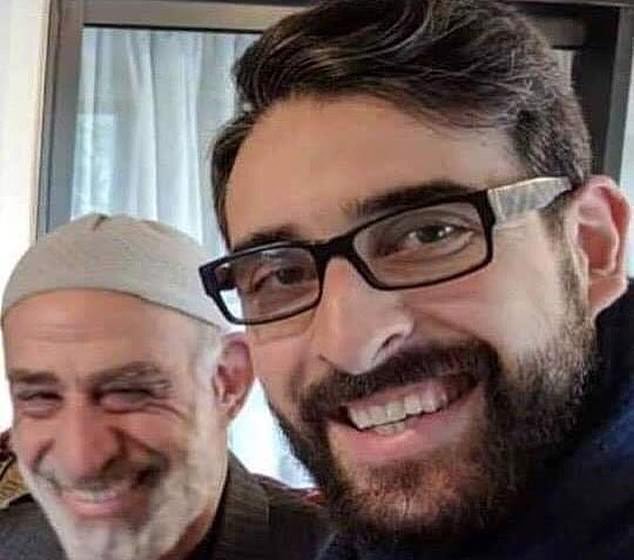 National-level futsal player Atta Elayyan (right) was among those killed on Friday. He is being remembered as an ‘inspiration’

Officers found two explosives in the car, which were disabled by a bomb disposal unit.

Latef Alabi, the Linwood mosque’s acting imam, said of Mr Aziz: ‘He went after him, and he managed to overpower him, and that’s how we were saved.’

In the hours that followed what Prime Minister Jacinda Ardern called ‘one of New Zealand’s darkest days’, locals began to move slowly through the city to lay flowers outside both places of worship.

Families of the victims knelt and cried before teddy bears and burning candles as hearse after hearse drove slowly by to carry away the bodies of victims. Police cordoned off a large area around the two mosques as forensic experts lined the streets in navy uniforms, searching the ground for evidence.

Mounds of bouquets – thousands in all – quickly formed, accompanied by handwritten cards bearing messages of solidarity and strength. Posters, paper birds and red love hearts hung on trees. Words of support for the Muslim community appeared on pavements, written in multi-coloured chalk. 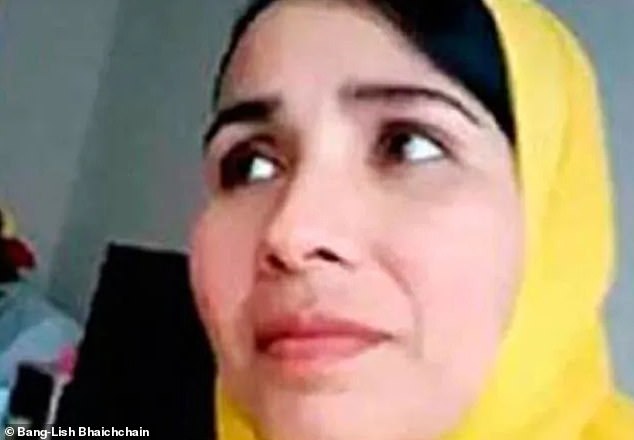 Also killed in the attack was Husna Ara Parvin (pictured), who was reportedly gunned down as she tried to save her quadriplegic husband from the shooter

By all accounts, Tarrant, who describes himself as the son of a ‘working-class, low-income family’, never expected to survive the day. He planned to go on killing until he was himself cut down.

Instead, he was hauled before a court yesterday, handcuffed and wearing a white police-issue tunic, and was charged with murder.

The judge, Paul Kellar, said it was ‘reasonable to assume’ that Tarrant, a short, broad-shouldered man, would face further murder charges. The judge allowed photographs to be taken inside court on the condition that Tarrant’s features were obscured.

However, that allowed the accused to present to the cameras a form of the ‘OK’ hand signal that has been associated with white supremacists. Silent throughout the proceedings, Tarrant glanced several times at journalists before being remanded in custody without plea until April 5.

The horrific video of the mosque massacre was still available to be viewed on the internet yesterday, more than 36 hours after the attack.

While Facebook had successfully blocked the footage from being shared after it was live-streamed by killer Brenton Tarrant, it remained available on at least one website.

Clicking on the link opened up the video showing the graphic horror of the attack at the Al Noor mosque. Last night, Twitter said it had removed the video highlighted by The Mail on Sunday and shut down the account.

Meanwhile, the extremist message board where Tarrant posted his hate-filled manifesto has been taken down.

Police were forced to clear crowds who had gathered outside. Some had lost relatives and friends. Armed police patrolled the building as a police helicopter circled overhead.

One member of the public, who was denied entry to the court, said he wanted to get in and ‘knife’ the accused and brandished a weapon he had brought.

Meanwhile, police in Dunedin, a city 220 miles south-west of Christchurch, sent a bomb-disposal robot into the house where Tarrant is believed to have planned the deadly attack.

Last night, Turkish authorities released a CCTV image of Tarrant during a visit to the country in 2016. Officials in Ankara said Tarrant had made two trips to the country and they were investigating who he may have met.

They released a photo of him walking through the airport in March 2016.

Tarrant is said to have set off on a journey around the world in 2011, following the death of his father Rodney, and his warped views crystallised on his travels, reinforced by extreme material he perused on the internet.

The Bulgarian government has also said it was investigating Tarrant, who apparently visited the country late last year.

Last night, troubling allegations surfaced that members of the gun club that Tarrant belonged to had openly discussed taking part in mass shootings.

Pete Breidahl, 40, a former member of the New Zealand Defence Force, said he had warned police in 2017 that the Bruce Rifle Club in South Otago was the ‘perfect breeding ground’ for a mass shooter.

Tarrant joined the club after he successfully applied for a gun licence in 2017.

Mr Breidahl said he had visited the club three times in recent years and had overheard members talking about mass shootings.

He said: ‘The conversations I had and the people I met literally terrified me to my core and I left early.’

He added: ‘The place just stunk of inadequacy compensated through use and ownership of semi-automatic firearms.’

He said he went to the local police station not long after and lodged a formal complaint with officers, but that his concerns were not acted upon.

Last night, 36 of the injured victims remained in hospital, 11 of whom are in intensive care fighting for life. A further 60 people remain on the official missing persons list, raising fears that the death toll could rise significantly.

Fifteen of Tarrant’s 50 victims have been identified by family members, including Palestinian surgeon Dr Amjad Hamid, 57, who had moved to New Zealand with his wife for a better life, and Kuwaiti Atta Elayyan, 33, who had recently become a father.

Last night, amid fears of a jihadi backlash, protests were held in Pakistan against the shooting and many mourners gathered to comfort the father of Syed Areeb Ahmed, a Pakistani victim of the massacre.

Protests were also being held in Istanbul, which condemned the violent attack. People could be seen burning flags which had been printed with the face of Tarrant.

In New Zealand, Daniel John Burrough, 18, was charged with ‘exciting hostility or ill-will’ in relation to the attack.

'Bravo!' Crowd breaks into applause in Strasbourg to thank terror cops
The star sign most likely to cheat on their partner in 2019 - and the ones who will remain faithful
Yes, you really CAN beat heart disease:
‘Chicken’ Theresa May has ‘completely bottled’ Brexit says Boris
Desperate search for British hiker, 49, lost in New Zealand mountains
1,250-mile road approved through Russia linking Europe to China
British Red Cross worker who helped at Grenfell was depressed
First Premier League game is called off due to coronavirus