It dates from the time of William the Conqueror and has become an enduring symbol of timeless tradition.

But now Windsor Castle is being dragged into the 21st Century – with the addition of two charging points for electric cars.

The Royal Household has applied for planning permission for the pillars to be installed on the cobbled streets within mews that were originally built as a horse-riding base for Queen Victoria. 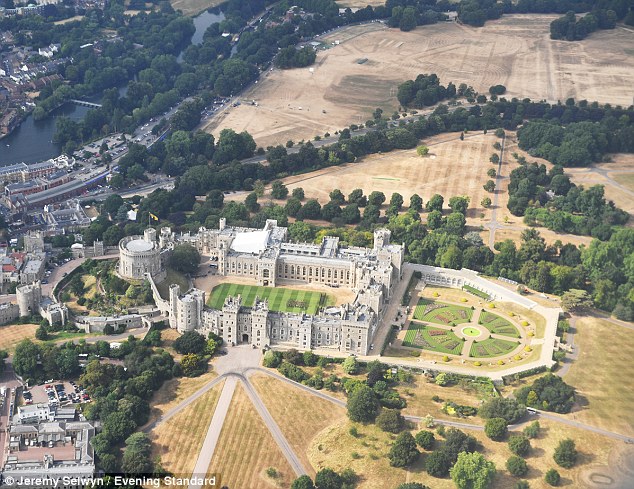 Royals have increasingly embraced electric technology, with Harry and Meghan last year driving from the castle to their wedding reception in a £350,000 silver blue Jaguar-E Type Concept Zero – an electric version of the 1968 British classic.

Prince Philip drove one of the first prototype electric vehicles in the 1970s, and Prince Charles reportedly got an electric car last October for his London engagements.

The Queen has also voiced concerns about the environment and global warming – but it is not known if she owns electric vehicles.

The application for two new charging points – in a part of the castle out of bounds to the public – has been lodged with the Royal Borough of Windsor and Maidenhead.

Amber Heard dazzles in plunging sea green gown and intricate headwear at Aquaman premiere in London
Toddler found alive in Fiji where five family members were dead as Kiwi witch doctor is questioned
The Arnhem flower girl who is still devoted to the hero who helped liberate her Dutch village
Doctor Kylie Moore-Gilbert named as Melbourne University lecturer held in Iran's Evin prison
Prince Andrew should talk to the FBI under oath about friendship with Jeffrey Epstein, lawyer says
Tarzan actor Ron Ely's wife was stabbed to death by their SON
Former SDP leader Lord Robert Maclennan who led party in merger to form Lib Dems dies aged 83
Taming of the Hound of Hounslow: He's the brilliant 'savant' who cheated Wall Street from a bedroom