showed her support for Red Nose Day as she donned a charity T-shirt and dark skinny jeans as she made her way into to do her part for the television extravaganza on Friday.

The I’m A Celebrity winner, 28, was spotted at Durham train station as she prepared to catch a train to join a legion of stars at the annual fundraising event.

The TV personality looked happy and confident in a black and white Mickey Mouse t-shirt, which was layered under a stylish black blazer. 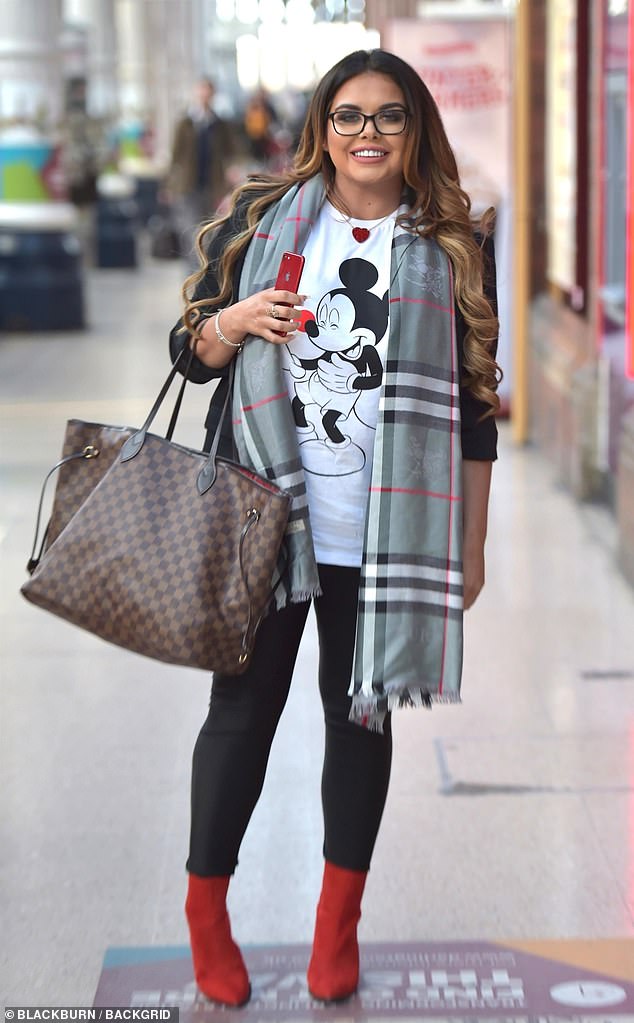 Charity: Scarlett Moffatt, 28, was spotted at Durham train station on Friday as she prepared to catch a train to join a legion of stars at the annual Comic Relief fundraising event

Scarlett showed off her figure in a pair of tight-fitting black jeans, while adding a pop of colour in a pair of red, suede ankle boots.

The star accessorised her chic look with an over-sized brown Louis Vuitton handbag, a large grey chequered scarf and a pair of black glasses.

She completed her outfit by adding a cute red heart necklace and delicate silver jewellery.

Clutching her red mobile phone, Scarlett beamed to the camera as her highlighted tresses tumbled over her shoulders in loose curls. 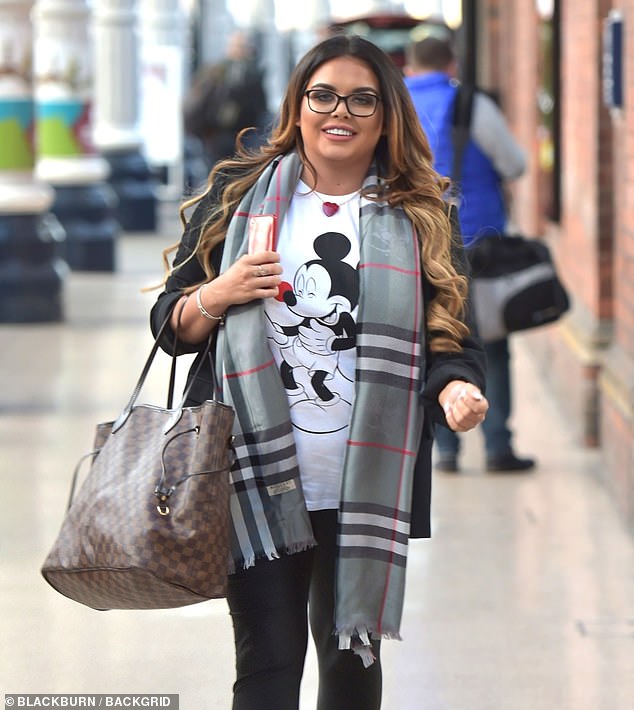 Support: The I’m A Celebrity winner showed her support for Red Nose Day as she donned a charity t-shirt and dark jeans as she made her way into London to do her part for the campaign

Earlier in the day, she kept her fans informed about her upcoming evening, sharing a selfie of herself on Instagram alongside the caption: ‘Off to London to support the amazing charity @comicrelief.

‘Hope everybody has a lovely Red Nose Day And does their little bit to help vulnerable people. Tune in to BBC tonight (you may even see my little face) #comicrelief#rednoseday #charity #love.’

Scarlett will join a host of famous faces on the phones as they accept donations for the Comic Relief charity. 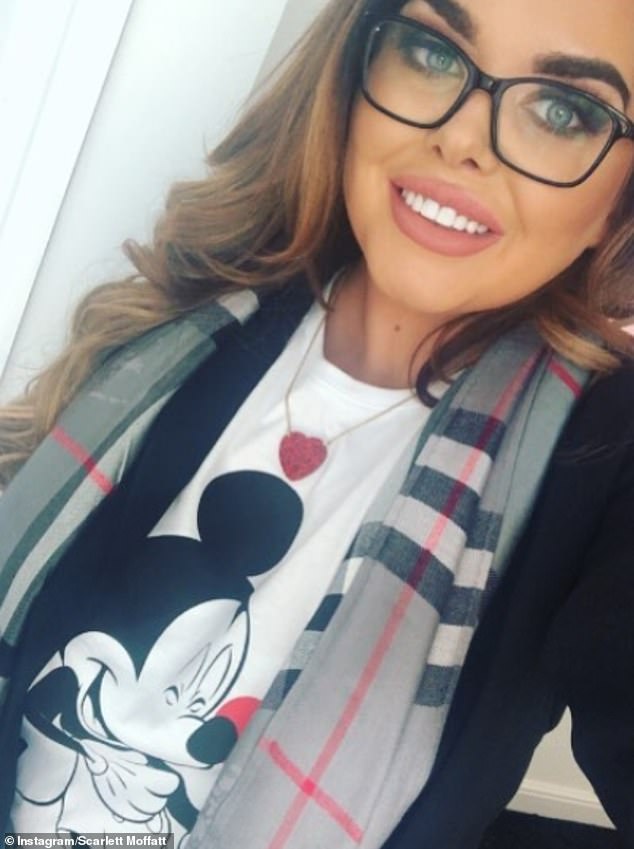 Chic: The TV personality looked happy and confident in a black and white Mickey Mouse r-shirt, which was layered under a stylish black blazer

Scarlett’s confident outing comes after she revealed at the National Television Awards in January that she’s embraced her figure.

Touching on her newfound confidence, the former Gogglebox star star said: ‘I’ve learned to embrace my curves, this is me. I was going to hide away under a suit and I thought, no, why should I, so I wore this dress instead that shows off everything.

‘I’ve accepted my body and I’m happy with curves, and I love my boobs. I’m representing the curvy girls and that’s great.’ 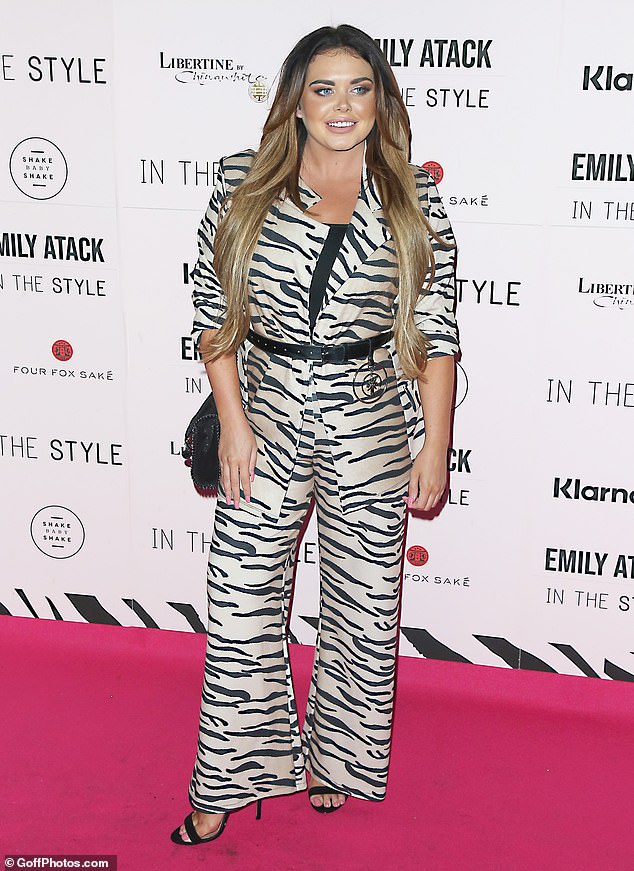 Stylish: Scarlett will join a host of famous faces on the phones as they accept donations for the Comic Relief charity

A host of famous faces flocked to the In The Style x Emily Atack launch party in London.

And we’re not surprised to see so many in support of the new collection; it’s packed with printed co-ords, sexy knitwear and slinky dresses. To be honest, we want it all!

Scarlett Moffatt’s tiger print suit is a prime example. While the high street is awash with leopard, this two-piece offers a refreshing take on the animal print trend. When combined, the belted jacket and wide leg trousers pack a punch when it comes to making a statement!

Think you can pull it off? Click (right) to buy it now.

Or see what the virtual high street has to offer in the carousel below. SHEIN’s trouser suit costs just £19.99!

Scarlett’s interview proves the TV personality has come a long way with her body confidence, after admitting she hated being thin after losing three stone last year.

Speaking at the Glamour Beauty Festival in March, the brunette shared: ‘When I first came out of the [I’m A Celebrity] jungle I went through a stage where I felt like I had to try and look a certain way.

‘I wanted to try and get out of the stereotypical Geordie girl so I stopped wearing fake tan and wore WAG dresses.’

‘I was really miserable,’ she continued. ‘I like being orange and having eyelashes that go up to my forehead.’