Beto O’Rourke has apologized for joking that his wife raises their three children practically on her own, for his white privilege, and for his troubling teenage fantasy fiction about killing kids that has come back to haunt him.

The former Congressman addressed the fiery criticism thrown his way following his 2020 Democratic presidential bid announcement on Thursday, hoping to clear the air before heading on the campaign trail.

Speaking on the podcast Political Party LIVE! in Cedar Rapids on Friday he admitted he was wrong for joking that his wife raised the family only ‘sometimes with my help’, which had sparked outrage among female politicians and activists. 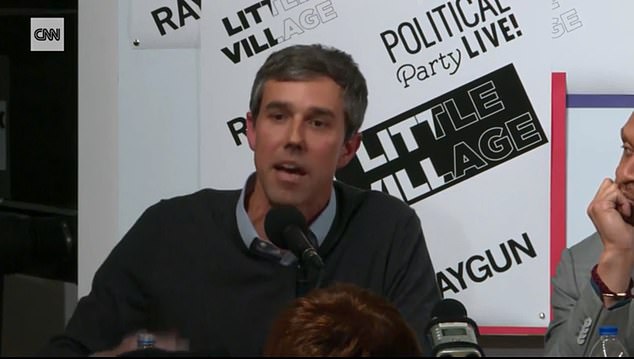 Beto O’Rourke apologized for joking that his wife Amy raises the kids on her own, his white privilege, and his jarring teenage fiction writing during an interview with the podcast Political Party LIVE! in Cedar Rapids, Iowa on Friday 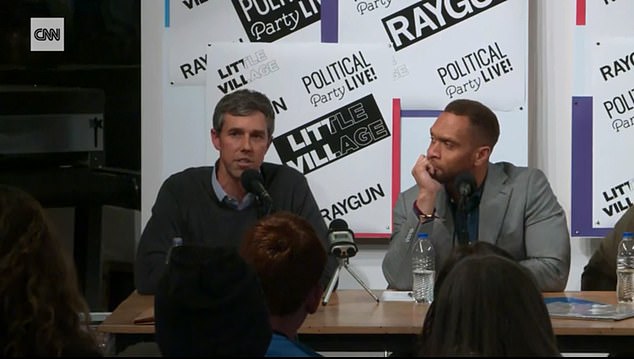 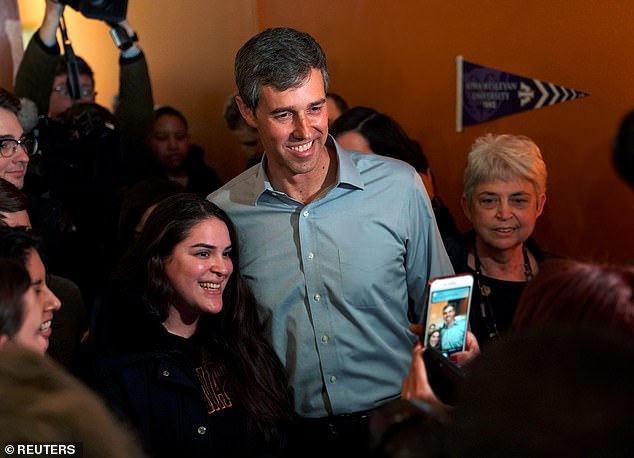 The 46-year-old launched his presidential campaign with a three day road trip across Iowa. Pictured above Friday in Mount Pleasant

‘Not only will I not say that again, but I’ll be more thoughtful going forward in the way that I talk about our marriage, and also the way in which I acknowledge the truth of the criticism that I have enjoyed white privilege,’ the 46-year-old said.

He acknowledged that the ‘criticism is right on’ and said his controversial statement was his ‘ham-handed attempt to highlight the fact that Amy has the lion’s share of the burden in our family’.

He and Amy married in 2005 after meeting on a blind date and have two sons and a daughter tougher.

Then he went on to apologize for his jarring poetry and fiction written as a teenager while he was a member of a group of activist computer hacking group Cult of the Dead Cow, which included fantasizing about killing young children and a suggestive ode to a cow. 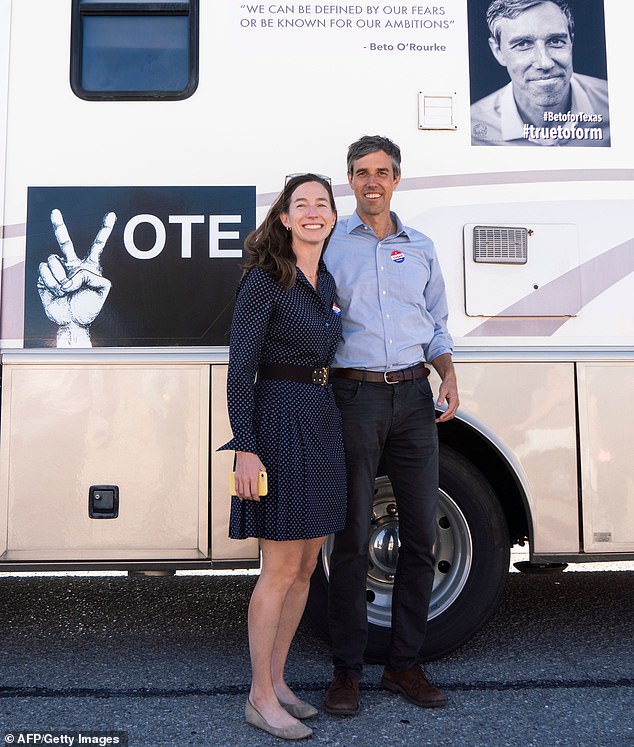 On Friday he admitted he was wrong for joking that his wife raised the family only ‘sometimes with my help’, which had sparked outrage among female politicians and activists. Pictured above with wife Amy Hoovers Sanders 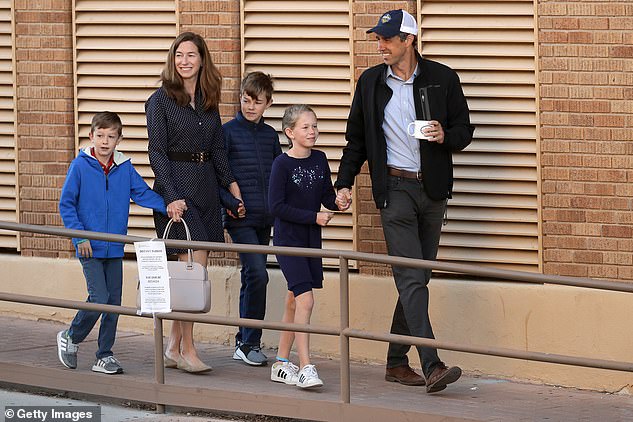 Beto and Amy share three children together Henry, Ulysses and Molly pictured together in 2018

The presidential candidate said he was ‘mortified’ that his teenage musings under the pseudonym ‘Psychedelic Warlord’ have resurfaced.

At the age of 15 O’Rourke published a shocking fiction piece about a driver who ran over and killed children with their car because they were ‘happy’, according to a Reuters report on his hacking history published a day after he announced his White House bid.

He wrote that after running over the kids, ‘I was so fascinated for a moment, that when after I had stopped my vehicle, I just sat in a daze, sweet visions filling my head.’

His writings become even more disturbing in his poetry, particularly one piece fashioned as very suggestive ode to a cow.

Lines in the piece entitled The Song of the Cow saying ‘Thrust your hooves up my analytic passage, Enjoy my fruits’ and ‘Buff my balls, Love the Cow’. 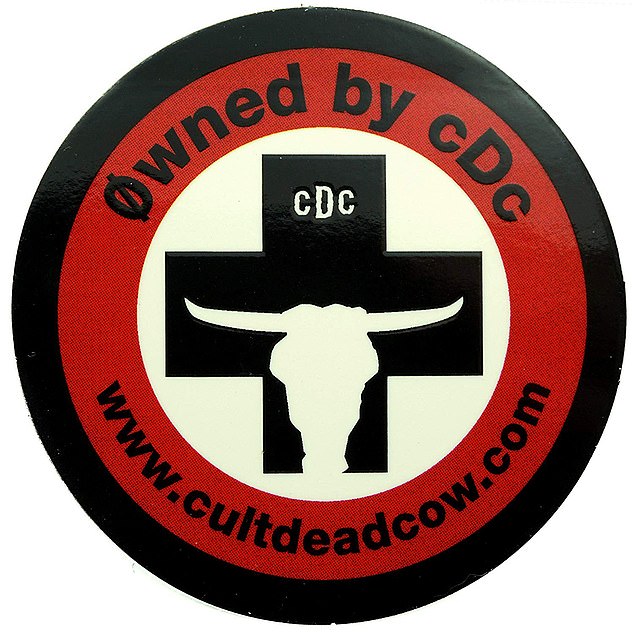 On Friday, a day after his White House bid announcement, it was revealed he was a part of computer hacking activist group Cult of the Dead Cow as a teenager 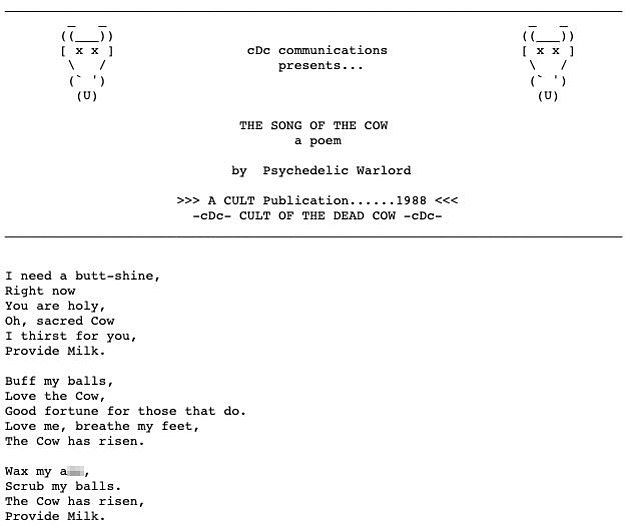 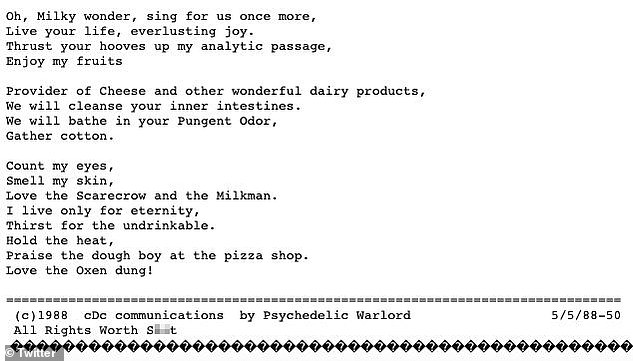 Teenage kicks: Pre-punk, Beto O’Rourke wrote this poem which was apparently in praise of the dead cow referred to in the hacker group’s name

He apologized for his writing saying: ‘There was a report that came out today that shared things that I had written as a teenager. Really hateful. Really bad stuff.’

‘I’m mortified to read it now, incredibly embarrassed, but I have to take ownership of my words.

‘Whatever my intention was as a teenager doesn’t matter, I have to look long and hard at my actions, at the language I have used, and I have to constantly try to do better,’ he added.

The liberal El Paso native also talked about white privilege and how he’s benefited from it, citing how he walked away from two arrests while he was still a young man without serious consequences.

‘I have been arrested twice in my life. Once for attempted criminal trespass and another more braver offense of driving while intoxicated,’ he said during the Friday talk.

‘Those offenses didn’t end up defining me or narrowing my options in life and it’s not because I’m a great person…a lot of it has to do with the fact that I’m a white man.

‘I’ve understood better from the experiences of others how this criminal justice system works and how it doesn’t work in this country,’ he added.

O’Rourke announced his White House bid on Thursday after months of speculation with a three-minute video where his wife Amy sits supportively at his side clinging onto his arm.

However, he’s faced backlash already in his running, with critics like President Donald Trump mocking him as crazy for his excessive hand movements and Dr. Drew Pinsky, the host of The Celebrity Rehab, saying ‘there’s something not right’ about O’Rourke.