The FBI was taking no chances when it came for Felicity Huffman.

Its agents were waiting with their guns drawn and handcuffs ready when the actress and star of the long-running TV comedy-drama Desperate Housewives opened the door to her smart Los Angeles home at 6am on Tuesday morning.

The agents may have been right to take such precautions, given that rich Americans will apparently do almost anything to get their children into the country’s best universities.

‘Desperate’ wouldn’t begin to describe the lengths to which Huffman, fellow actress Lori Loughlin and more than 30 other members of America’s richest families have allegedly gone in bribery, trickery and shameless fraud. 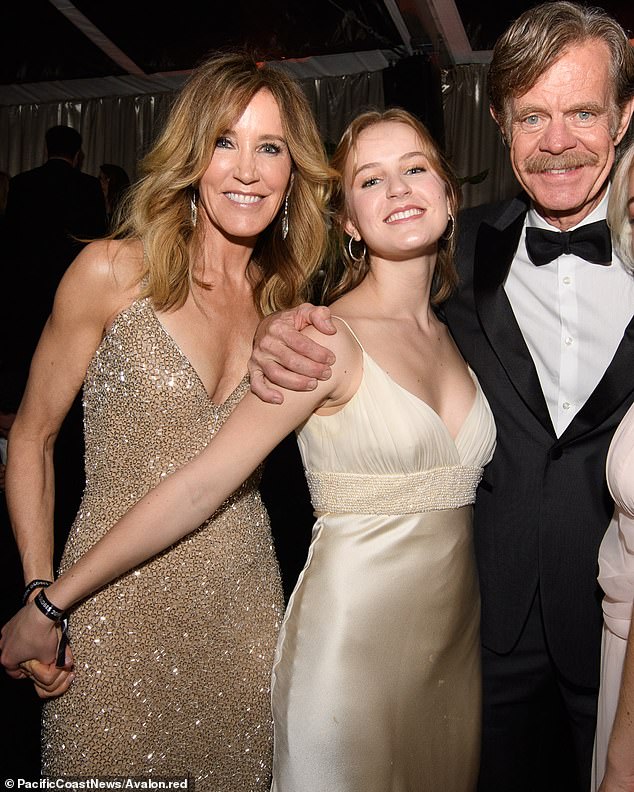 Pushy parents? Felicity Huffman and William H Macy are alleged to have paid $15,000 to help get daughter Sofia into a top university

The court papers present allegations about the deviousness allegedly employed by some 50 people charged so far by prosecutors.

Designers were employed to Photoshop university applicants’ faces onto photos of athletes’ bodies so the students could secure sporting scholarships, often for sports they had never played. One father went so far as to buy water-polo equipment from Amazon to make the photos of his son more authentic.

Crooked invigilators allegedly made a mockery of exams, sitting next to students and helping them or correcting their answers.

The invigilators would also turn a blind eye when a grown man sometimes turned up to take the exam in a student’s place, say prosecutors. Parents would occasionally submit their child’s handwriting in advance to make the exam forgery more convincing.

America has reacted with a mixture of stunned horror and contempt to a huge admissions scandal that has revealed once again how much everything in the country boils down to money. Prosecutors say parents paid up to seven figures per child to William Singer, a crooked university-entrance adviser who worked with corrupt college staff and exam invigilators to ‘guarantee’ their pampered — but intellectually under-powered — offspring places at sought-after universities. 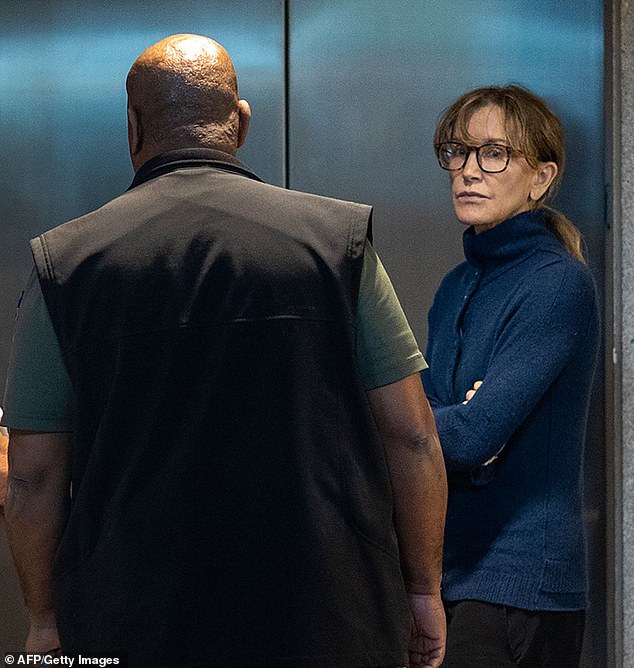 Felicity Huffman (pictured leaving court on Tuesday) has been released on $250,000 bond after she was charged in a massive college admissions bribery scandal

The nationwide cheating scheme is estimated to have raked in $25 million (£19 million) since it allegedly started in 2011.

Prosecutors say parents paid ‘anywhere between $200,000 and $6.5 million’ for Singer’s services. In most cases, the parents paid between $250,000 and $400,000 per student to secure their children’s place at the top of the country’s fiercely competitive university system.

A total of 33 parents — including a New York lawyer, a vineyard owner in Napa Valley, California, and a self-help guru whose books include ‘The Modern Girl’s Guide To Sticky Situations’ — have been charged. Prosecutors warned more are likely to follow.

Others already charged include exam invigilators and college sports coaches, including a tennis instructor who taught Barack Obama’s family when they lived in the White House.

For those who know how university entrance works in supposedly egalitarian America, the revelations are depressing — but not surprising.

Critics say the elaborate fraud would never have lasted so long if the flawed system were not skewed towards the wealthy.

Oxford and Cambridge colleges may still be packed to the gargoyles with privately-educated undergraduates, but if you thought Britain’s university system was a bastion of embedded privilege that favours affluent parents who work the rules, it has nothing on its equivalent across the Atlantic.

Top American universities not only more or less guarantee places to the children of people who make large donations: they also give a shameful leg-up to the offspring of their alumni in a process quaintly called the ‘legacy’ system. 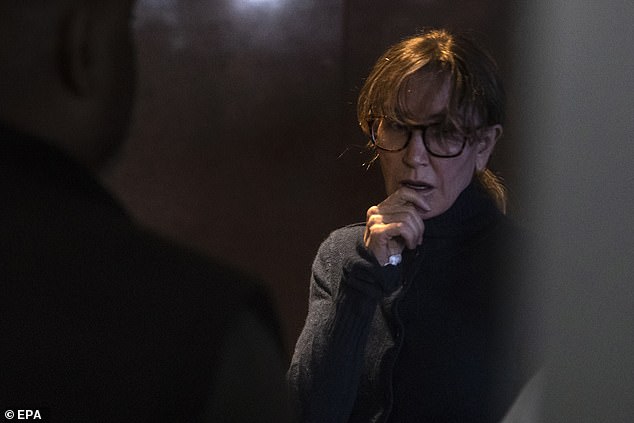 Perhaps the entitled parents in the new criminal case — including financiers, successful businessmen, a fashion designer and even the head of a large law firm — felt they were only sending their spoilt offspring, with a little help, to where they truly belonged.

Although prosecutors say the parents identified in the ‘Operation Varsity Blues’ investigation were the ‘prime movers of the fraud’, it was allegedly masterminded by William Singer, founder of a California-based university coaching business known as The Key.

Mr Singer offered two basic ruses to provide what he called a ‘side door’ into universities that included Yale, Stanford, UCLA, Georgetown and the University of Texas (none of the universities were directly implicated in court papers).

Using corrupt exam invigilators in Los Angeles and Houston, Texas, he could ensure students’ entrance test scores were bumped up. If that were not enough, they could also be repackaged as athletics stars.

U.S. universities put high prices on the prowess of their sports teams and are thus prepared to relax academic requirements for applicants who show talent in anything from American football and athletics to squash and sailing.

Singer, who is cooperating with prosecutors after admitting charges that include racketeering conspiracy and money-laundering conspiracy, has outlined how students’ results in the relevant exams — namely the SAT (which tests writing, critical reading and maths) or ACT (which includes science) — could be upped to whatever mark was required.

The student then took the exams either in Los Angeles or Houston where Mr Singer had bribed invigilators. (Singer told parents to use an excuse such as a wedding to explain why they had to take exams in those cities.)

Invigilators would generally correct the exams afterwards so students would usually not even know they were cheating. Much of the cheating was allegedly done by Mark Riddell, a Harvard graduate and head of university entry at a private school. Prosecutors say Riddell, 36, would take exams in place of the children, give them answers they needed while invigilating their exams and correct wrong answers afterwards.

Allegedly paid $10,000 for each fraudulent exam, he is due to plead guilty to conspiracy charges next month. 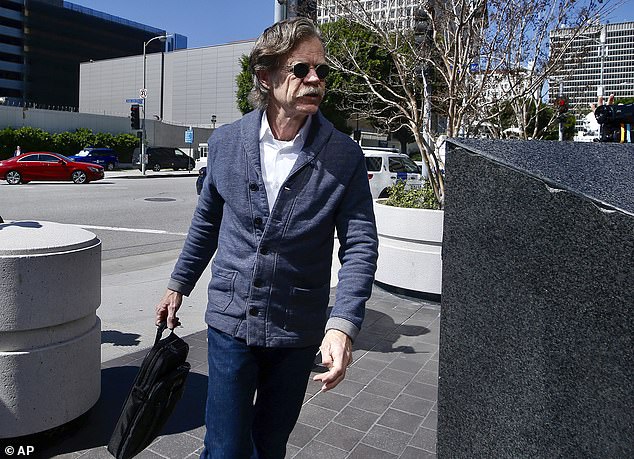 Macy was in Los Angeles federal court on Tuesday to support his wife. Authorities have not disclosed why he was not implicated in the scandal

According to court papers, Singer also coached parents on inventing medical conditions or learning difficulties for their children so they would sit exams alone or in cities where he had bribed invigilators.

Some parents had no illusions about the challenge of getting their children into good universities.

Marketing and self-help expert Jane Buckingham told Singer she equated getting her son into the University of Southern California with curing cancer and bringing peace to the Middle East, according to a conversation detailed in court papers.

She said she was worried about his handwriting when one of the alleged fraudsters offered to sit the exam and fake it. She sent him a sample of his spidery scrawl, along with a note saying ‘Good luck with this’.

It was a very lucrative operation, the allegations make clear. Parents allegedly paid Singer between $15,000 and $75,000 for each exam he fixed, the money being funnelled through a charity he ran that purportedly provides education programmes for ‘disadvantaged youth’.

In a final irony, because of rules on charitable donations, the parents could reclaim the money they paid Singer as income tax deductions.

Felicity Huffman and her husband, the Oscar-nominated actor William H. Macy, were both secretly recorded in phone calls with Singer and allegedly visited him at his LA home, but only Ms Huffman was charged over allegedly paying $15,000 to boost a SAT score for their daughter Sofia Grace, 18. 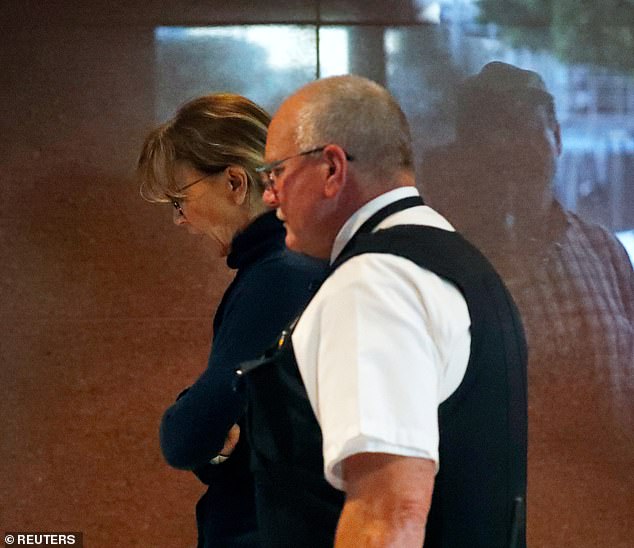 Huffman had to surrender her passport to the court on Tuesday. Her next court date is set for March 29 in Boston

When Macy, star of the film Fargo and the U.S. version of Channel 4 comedy Shameless, visited a prospective university with his daughter, his wife tweeted an affectionate photo of them, saying it made her ‘nostalgic’.

Behind the scenes, say prosecutors, she was plotting with Singer. Their plans hit a snag when her daughter’s school said it wanted to provide its own invigilator, say court papers. However, Singer and Huffman then told school officials Sofia Grace wanted to take the exams at the weekend so she wouldn’t miss any school.

She was allowed to take the exams outside her school in West Hollywood, where she was invigilated by Mark Riddell.

She achieved a score of 1,420, 400 more than she managed in a mock SAT she had sat a year earlier without Riddell, say prosecutors.

Huffman, who won an Emmy playing harassed mother-of-four Lynette Scavo in Desperate Housewives, has been released on $250,000 bail after surrendering her passport. Her husband sat with his head down staring at the floor during her court appearance.

Also arrested yesterday was fellow actress Lori Loughlin, whose fashion designer husband, Mossimo Giannulli, has been implicated as well. Like Huffman, Loughlin, the star of U.S. sitcom Full House, reportedly faces charges of conspiracy to commit mail and other frauds.

Loughlin and her husband allegedly arranged to pay a $500,000 (£378,000) bribe to have their two children designated as recruits to a University of Southern California (USC) rowing crew. But the children barely knew one end of an oar from the other, according to prosecutors.

The Loughlins allegedly staged a photo of older daughter Isabella on a rowing machine. The strategy worked and they used it again, complete with rowing-machine, with younger daughter Olivia. University officials apparently didn’t spot that both students claimed to be coxes, who don’t need to row.

A Federal judge allowed Loughlin to be released from custody after she posted $1million bail Wednesday.

Daughter Olivia is a social-media star with 1.3 million Instagram followers. She recently boasted to her followers that she didn’t ‘really care about school’ and wanted the ‘experience’ of ‘partying’ while at USC. 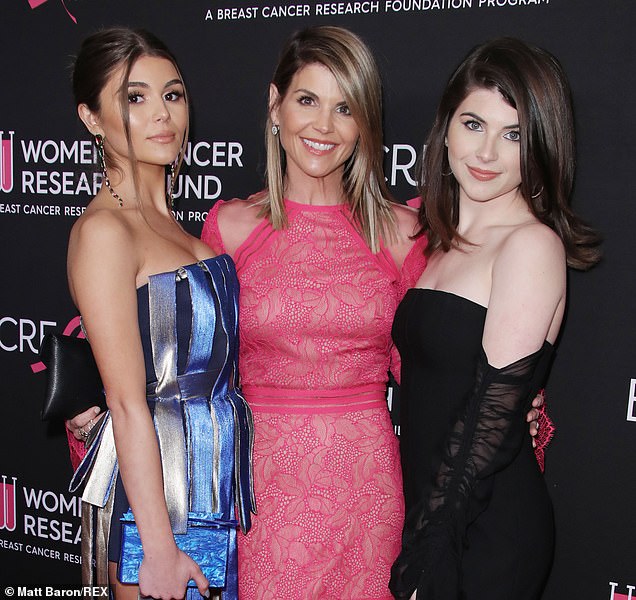 The Loughlins were far from alone in falsely claiming sporting excellence. University coaches in sports as varied as football (the British kind), tennis, volleyball and sailing colluded in the conspiracy, say prosecutors.

Some have since been sacked and some have cooperated with the investigation.

A wealthy California media executive, Elizabeth Kimmel, allegedly claimed her son was ‘an elite high school pole-vaulter’ in his application for USC, even though he’d never done any athletics at high school.

His application was accompanied by a doctored photo of a real pole-vaulter clearing a 14ft bar.

The Kimmels, who reportedly also used the scheme to secure their daughter’s university place as a tennis star, allegedly paid $475,000 (£358,000) to Singer’s foundation.

None of the students themselves have yet been charged and prosecutors say their parents often went to elaborate lengths to keep them in the dark about the subterfuge.

Singer allegedly reassured Gordon Caplan, chairman of an international law firm and accused of paying $75,000 (£57,000) for the fraudster’s help, that his daughter ‘won’t even know that it happened . . . she will think that she’s really super-smart’.

According to prosecutors, Isabelle Henriquez, whose father runs a California hedge fund, couldn’t help but notice something was going on as the invigilator sat next to her as she took her SAT exam last October and corrected her answers as she went. Her parents, who allegedly stumped up $425,000 to earn Isabelle a place at Georgetown University, had paid for the invigilator to fly in for her exam, which she sat at her private girls’ school.

Afterwards, the pair ‘gloated’ about their scam, according to court papers. Isabelle’s father, Manuel, resigned as boss of his firm after the scandal sent the value of its shares plunging.

Critics say money already counts for far too much in America’s universities, with its deeply unfair ‘legacy system’ that favours the children of former students and which is happily exploited by even the most avowedly liberal parents.

The tradition was originally introduced to keep Jews out of the elite Ivy League universities but survives now chiefly because it is a handy fundraising tool.

America prides itself on being the world’s greatest meritocracy — but gets a big F when it comes to its top universities.