Lacey Turner has revealed that she refused to believe that she was pregnant after suffering two miscarriages previously.

The star, 30, spoke on Wednesday’s edition of This Morning about her past heartache but also the blessing of her current pregnancy, with the actress expecting to welcome her first child in July.

Lacey admitted it was ‘heartbreaking’ to lose her unborn children, as she explained her ‘whole world crumbled’ and she blamed herself for the loss. 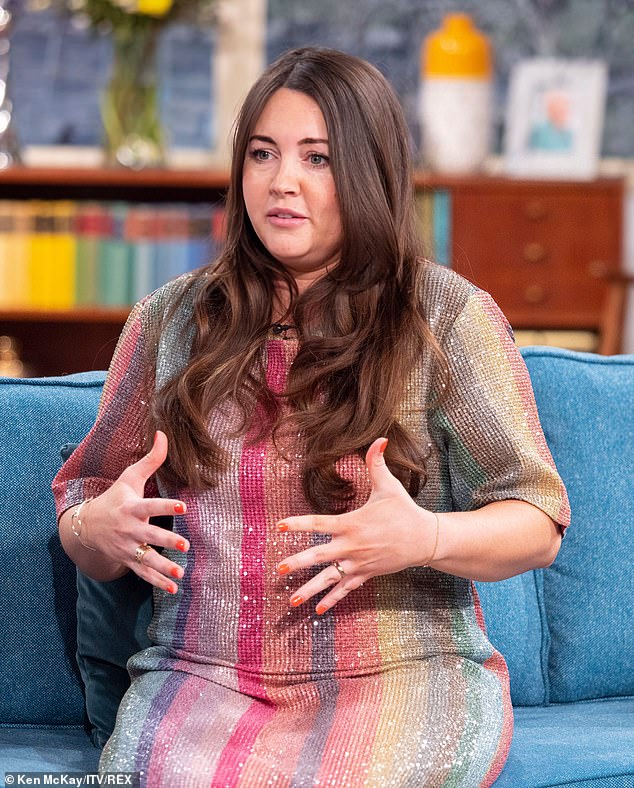 Heartbreaking: Lacey Turner admitted on Wednesday’s Loose Women that she believed she would never have a baby after suffering two miscarriages with husband Matt Kay

She explained: ‘Matt [Kay, her husband]  and I have been together half our lives so I just thought, I’ll get married when I’m 20-something, then I’ll have a baby… and then I realised it doesn’t work like that, not for everybody.’

Recalling their first pregnancy, she said: ‘We couldn’t believe it, we got a positive pregnancy test, you start thinking about names, and then we got to seven weeks and sadly lost it.

‘It was heartbreaking, my whole world crumbled, I couldn’t understand it.’

Lacey continued: ‘I didn’t know anybody who had been through something like this. I couldn’t understand why I was so sad at something I had never met.’

Admitting that she blamed herself for the tragedy, she added: ‘It is really confusing. I thought, “what did I do? Was my steak not cooked properly?” You drive yourself insane’. 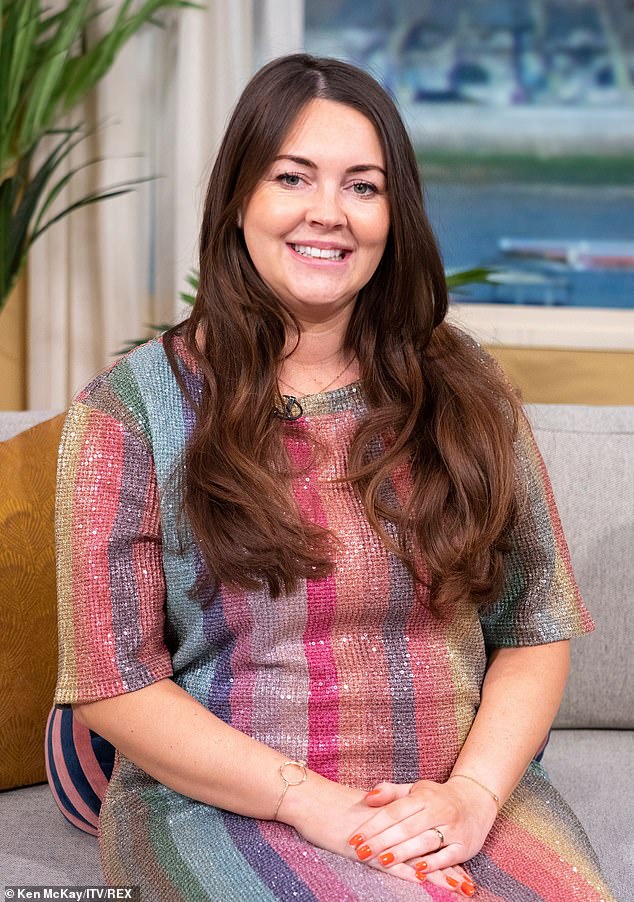 Mother-to-be: The EastEnders star, 30, spoke on Wednesday’s edition of This Morning about her past heartache but also the blessing of her current pregnancy 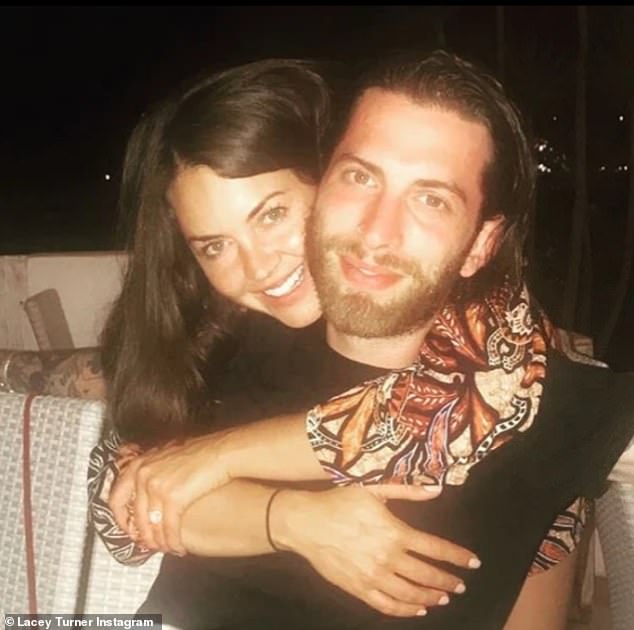 Great news: Lacy and her husband Matt Kay are expecting to welcome their first child in July

Lacey and Matt were also ‘frustrated’ to see that doctors could find no medical reason to why she had suffered a miscarriage, admitting that only served in making her blame herself.

Thankfully, Lacey – who plays Stacey Slater on EastEnders – was able to fall pregnant again 18 months after her second miscarriage, yet the soap star admitted that she refused to believe she was expecting.

Recalling the moment she told Matt about the positive test, she revealed: ‘I said “oh don’t get excited” and then I ignored it until I was about ten weeks. Then I thought, maybe this will work.

‘My family would say it’s OK, but I would say to my mum don’t talk about it. It wasn’t until I got to 20 weeks I thought oh!’ 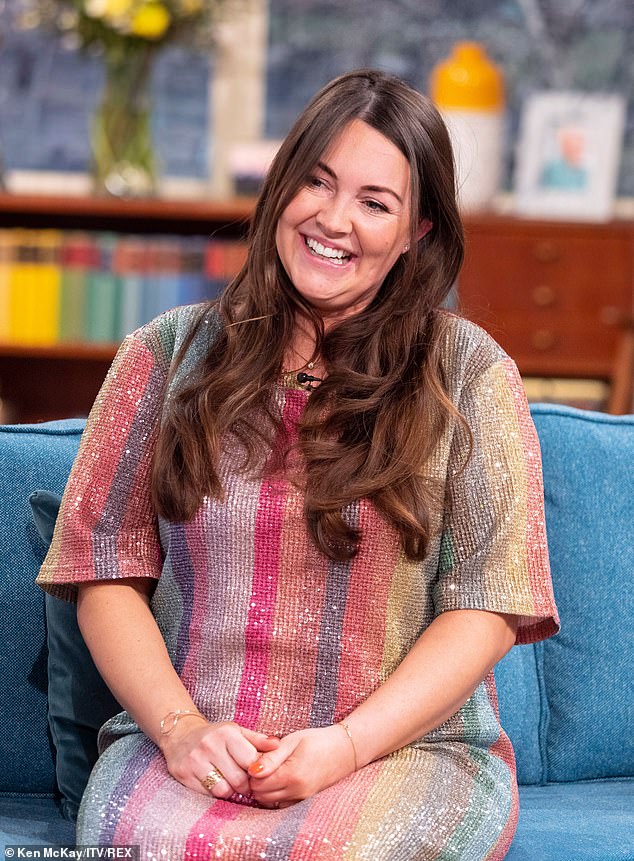 Baby joy: Thankfully, Lacey was able to fall pregnant again 18 months after her second miscarriage, yet the soap star admitted that she refused to believe she was expecting

She continued: ‘Luckily I got to seven weeks this time and the similar things started happening, I recognised the signs.

‘I just sat on the couch and cried, I thought I will go and see the scan man, I went and it had a heartbeat.’

Revealing why she chose to speak publicly about her heartbreaking losses, she explained: ‘I thought if Matt and I shared our story we would be able to help another couple.

‘We have been overwhelmed by the messages and people coming out and saying I have been through the same thing. 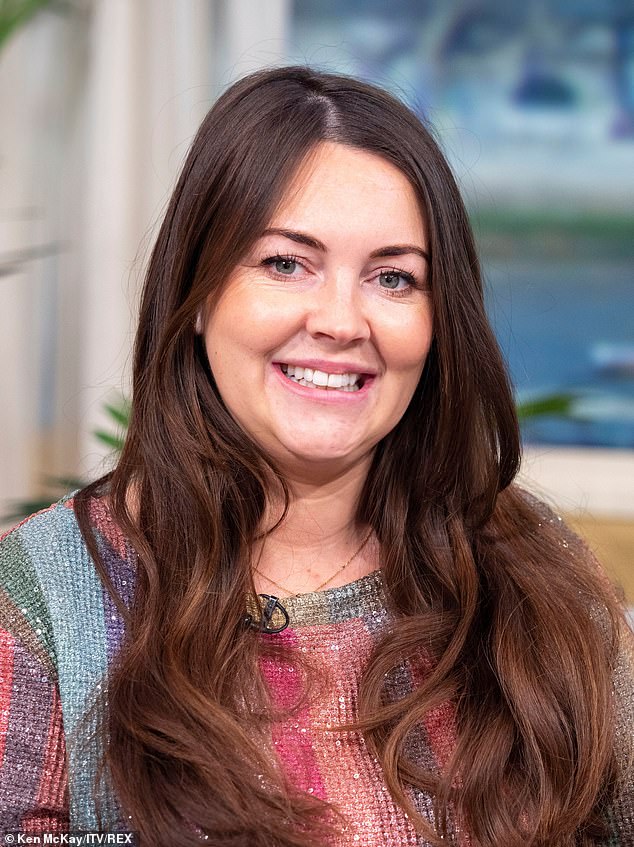 Cautious: Recalling the moment she told Matt about the positive test, she revealed: ‘I said “oh don’t get excited” and then I ignored it until I was about ten weeks’ 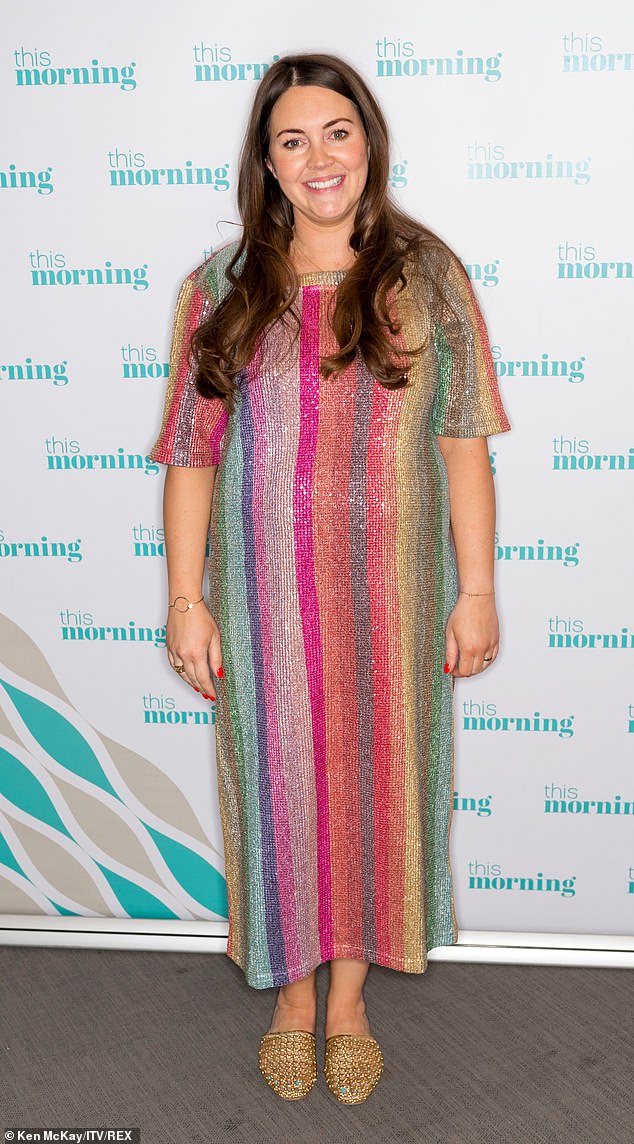 Helping: Revealing why she chose to speak publicly about her heartbreaking losses, she explained: ‘I thought if Matt and I shared our story we would be able to help another couple’

Lacey revealed her pregnancy news to OK! Magazine, last month as she confessed that she’s ‘dreamed of having a family for so long’.

The actress suffered two devastating miscarriages previously, meaning they have been closely monitored for this pregnancy, as she explained: ‘When you’ve lost babies all you care about is the heartbeat – we’ve had about 12 scans’.

Discussing the devastating impact of losing a child, she admitted: ‘it felt like my whole world had fallen to pieces’, adding ‘There’s nothing you can do apart from try and put it back together.’

She continued: ‘I blamed myself thinking that I’d done something wrong. I’d think, why me? What did I do? But, of course, I hadn’t done anything wrong – it’s all down to chromosomes and luck, really. ‘

‘Speaking to other people about it helped me. Women shouldn’t feel ashamed to talk about it as it happens to so many women.’ 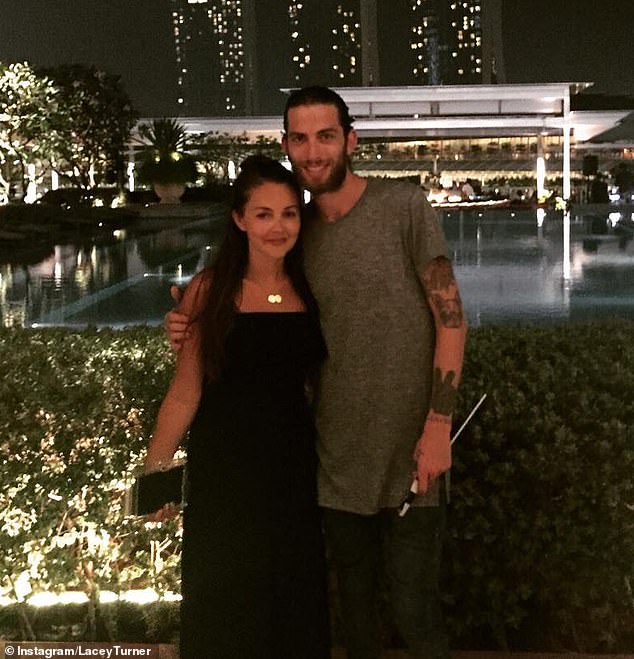 Cute couple: Lacey and Matt married in 2017 with a wild ceremony in Ibiza, with the partying continuing until 5am. The couple have been together since they were both 15

Lacey and Matt married in 2017 with a wild ceremony in Ibiza, with the partying continuing until 5am.

Speaking to OK! magazine at the time, she revealed: ‘The whole day was amazing. And we felt so much love. It’s incredible; it’s something you’ve never felt before.’

Of her pre-wedding nerves, Lacey confessed: ‘I had a few tiny moments when I panicked, but on the day I couldn’t wait to get down the aisle and marry Matt.’

The couple have been together since they were both 15, with the romantic proposal taking place in September 2016 during a break in Venice.

For support with the loss of a child contact The Miscarriage Association on 01924 200 799 or www.the-ma.org.uk

What causes a miscarriage?

It is highly unlikely that you will ever know the actual cause of a one-off miscarriage, but most are due to the following problems:

The most common cause of miscarriages in the first couple of months is a one-off abnormal development in the fetus, often due to chromosome anomalies. ‘It’s not as though the baby is fine one minute and suddenly dies the next,’ says Professor James Walker, Professor of Obstetrics and Gynaecology at the University of Leeds.

‘These pregnancies fail from the outset and were never destined to succeed.’ Most miscarriages like this happen by eight weeks, although bleeding may not start until three or four weeks later, which is worth remembering in subsequent pregnancies. ‘If a scan at eight weeks shows a healthy heart beat, you have a 95 per cent chance of a successful pregnancy,’ says Professor Walker.

A hormonal blip could cause a sporadic miscarriage and never be a problem again. However, a small number of women who have long cycles and irregular periods may suffer recurrent miscarriages because the lining of the uterus is too thin, making implantation difficult.

‘There used to be a trend for progesterone treatment, but trials show this really doesn’t work,’ warns Professor Walker. ‘There is some evidence that injections of HCG (human chorionic gonadotrophin, a hormone released in early pregnancy) can help, but it’s not the answer for everyone.’ The treatment must be started as soon as the pregnancy is confirmed, at around four or five weeks.

Around 20 per cent of recurrent miscarriers suffer from lupus or a similar auto-immune disorder that causes blood clots to form in the developing placenta.

A simple blood test, which may need to be repeated several times, can reveal whether or not this is the problem.’One negative test does not mean that a women is okay,’ warns Mr Roy Farquharson, consultant gynaecologist who runs an early pregnancy unit at the Liverpool Women’s Hospital.

Often pregnancy can be a trigger for these disorders, so a test should be done as soon as possible,’ he adds.But it can easily be treated with low dose aspirin or heparin injections, which help to thin the blood and prevent blood clots forming – a recent trial also showed that women do equally well on either. ”We have a 70 per cent live birth rate in women treated for these disorders,’ says Dr Farquharson, ‘which is excellent.’

While uterine abnormalities, such as fibroids, can cause a miscarriage, many women have no problems carrying a pregnancy to term. An incompetent cervix can also cause miscarriage at around 20 weeks.

While this can be treated by a special stitch in the cervix, trials suggest it is not particularly successful, although it may delay labour by a few weeks.Gene and chromosomal abnormalities, which can be detected by blood tests, may also cause recurrent miscarriages in a small number of couples.

A procedure known as preimplantation genetic diagnosis can help. After in-vitro fertilisation (IVF), a single cell is taken from the developing embryo and tested for the gene defect. Only healthy embryos are then replaced in the womb.

It is an expensive and stressful procedure – and pregnancy rates tend to be quite low – but for some this is preferable to repeated miscarriages or a genetically abnormal baby.

Jennifer Garner is a princess in tulle as she honors former co-star Bradley Cooper at presentation
BAZ BAMIGBOYE: Matt's the One to join the kings and queens of panto at the Palladium
I'm A Celebrity 2019: Ant McPartlin and Declan Donnelly reunite in Australia with their partners
Lisa Faulkner shows off her stunning frame with husband John Torode on their Mauritius honeymoon
Kourtney Kardashian is all business in brown leather suit as she leaves studio in LA
Sarah Michelle Gellar wishes her 'handsome man' Freddie Prinze Jr. a happy 44th birthday
Little Mix EXC: Jade Thirlwall discusses the impact of Jesy Nelson's trolling documentary
Charli XCX reveals she's taken up painting to ease 'frustration' as COVID-19 lockdown keeps her home