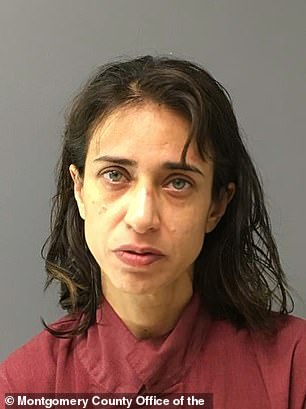 A mother-of-one has been charged with the brutal murder of two elderly women, including her former landlord, in front of her six-year-old son.

Police responded to a wellness check on Frost and, after accessing the residence from via a rear door, found Sami and her son hiding beneath a bed near the bodies, Montgomery County District Attorney Kevin Steele said.

Investigations revealed Sami had driven with her son to the residence on Thursday in search of help from Frost who had been her landlord some 20 years previous, Steele said.

Sami entered the apartment through an unlocked door and found no one home. When Gigliello vistited her friend Frost, Sami answered the door and allegedly murdered the woman as she tried to call 911.

Frost arrived home at a similar time, authorities say, and was murdered herself. Sami tried to clean the home of evidence using bleach but was found with blood on her

‘They were murdered by a former renter, who had lived at the property 20 years ago and had returned because the landlord, Ms. Frost, had offered to help her if she ever needed anything,’ Steele said in a statement.

‘Naseema Sami then murdered Ms. Frost and Ms. Gigliello, who was just visiting her friend. Our hearts go out to the families of these two victims and pledge to them that we will seek justice for their murders.’

Autopsies determined that Frost died of multiple injuries, while Gigliello succumbed to head trauma. The manner of death for both victims was homicide, Steele said.

Police say Sami admitted returning to Frost because she needed a ‘safe place to go’ having rented an upstairs apartment from her some decades prior.

‘She was worried, concerned about something,’ Steele said. ‘And she decided to go to a kindhearted person who years before had offered her help.’

Sami’s son, meanwhile, who witnessed both killings, watched as his mother tried to clean up the alleged crime scene with as many as 10 bottles of bleach, Steele told reporters.

Fears for Venezuelan 'twin' of collapsed Italian viaduct after a fireplace broke out on it simply fi...
JANET STREET-PORTER: Gwyneth Paltrow is an overpriced sextoy-peddling nutcase
SEBASTIAN SHAKESPEARE: Friends and family toast raffish royal restaurateur
Snow and rain will hit Britain today just hours after killer Storm Erik claimed third victim
How a brave British spy protected the man she loved by ensuring the Nazis tortured her instead
Cliff jumper's backward somersault off a 50ft cliff ends with him painfully smashing into the water
Jacob Rees-Mogg wades into row over Oxford 'no platforming' of Amber Rudd
Meghan Markle and Jessica Mulroney 'no longer friends'