The campaign, organised by Keep Britain Tidy and backed by the Daily Mail, will take place between March 22 and April 23.

With less than two weeks to go until it starts, 218,191 people have volunteered their time for organised litter pick-ups around the country. 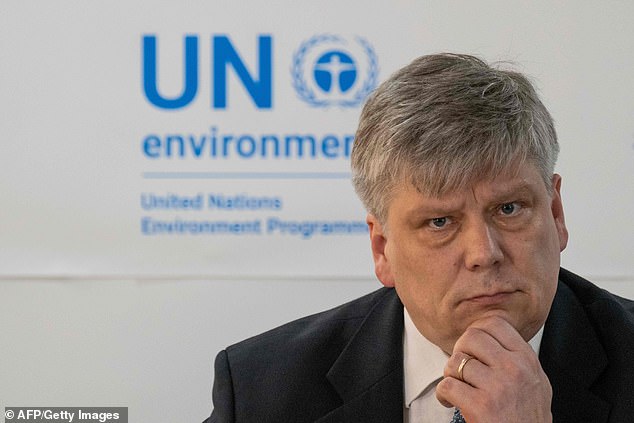 Mr Kiisler, speaking at the international gathering in Kenya dedicated to ridding the world of pollution, said cleaning up towns, cities, beaches and the countryside was a vital way to raise awareness about how we should all dispose of waste.

One of the aims of the Environment Assembly – being held this week in the capital Nairobi – is to get the 193 members of the UN to commit to ‘significantly’ reducing single-use plastics by 2030.

While government action was necessary to stop an estimated eight million tons of plastic rubbish being dumped in the sea every year, Mr Kiisler said it was important that citizens told companies they do not want to buy single-use plastic items.

A key way to send this message is to go out and clean up litter, whether plastic or otherwise.

He told a press conference at the UN Environment Assembly: ‘I believe the most important thing is the message given by people who go out and pick up trash, which somebody has just thrown out of their car window, and other waste in the environment.

‘They see that their friend, neighbour or colleague from work or member of their family went out and with their own bare hands picked up some trash because there is no other way to collect it. If they see their friends doing it they will probably think twice before doing it [dropping litter] again.’ 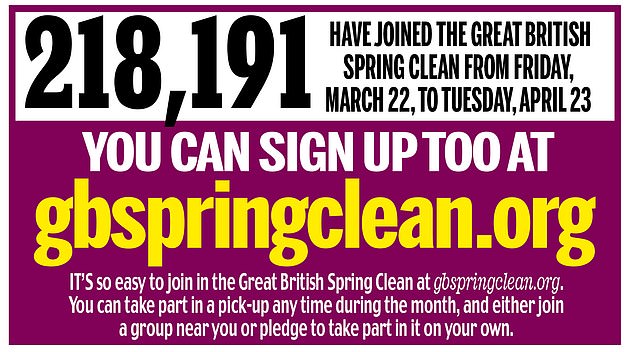 He made his comments after being told about the nationwide British clean-up promoted by the Mail. Mr Kiisler, who is the environment minister of Estonia, added: ‘This is the strongest message to give.’

It is hoped that half a million people will take part in the Great British Spring Clean, making it Britain’s biggest ever mass environmental action. Mr Kiisler said he was proud to have been involved in a similar event to the Great British Spring Clean in Estonia, called ‘Let’s Do It’, which began in 2008. He also took part in World Clean-up Day, an event in September.

Mr Kiisler’s endorsement of the British event is similar to when his senior UN colleague Erik Solheim praised the Daily Mail’s Turn The Tide On Plastic campaign at a global summit in 2017.

Earlier yesterday, Mr Kiisler led one minute’s silence for the 22 UN officials who died in the Ethiopian Airlines plane crash as they flew to Nairobi.

Delegates from the Environment Assembly sobbed as they remembered the victims of the air disaster, some of whom were on their way to the event.

They are used to performing their flawless routine in pristine pools.

But these teenage synchronised swimming champions volunteered to attempt it amid the kind of plastic rubbish that litters the world’s oceans – to raise awareness of the plight of marine animals.

Kate Shortman, 17, and 18-year-old Isabelle Thorpe performed twirls, kicks and half-somersaults surrounded by plastic bottles, containers, carrier bags and toiletries. A video of them struggling through the plastic at a pool in Bristol is available online. 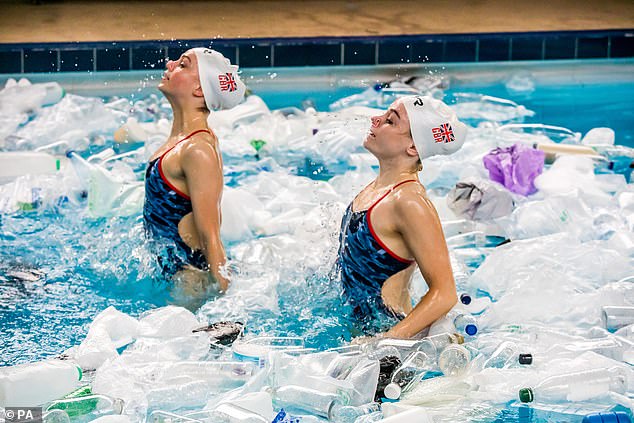 The British international pair were challenged to perform their world championship routine by the Big Bang Fair to highlight young people’s efforts to tackle the scourge of plastic pollution. Isabelle said: ‘Trying to do our routine in a pool full of plastic was really hard. We kept getting our legs stuck in the bags and bopping our heads on bottles.

‘It really hit home how awful it must be for the poor turtles and other sea life that go through that every day, so to hear so many people our age are using science and technology to come up with solutions to help this situation for the future is really great.’

The Big Bang Fair aims to get youngsters to use their scientific and engineering skills. It is free and takes place at the NEC in Birmingham from tomorrow until Saturday. 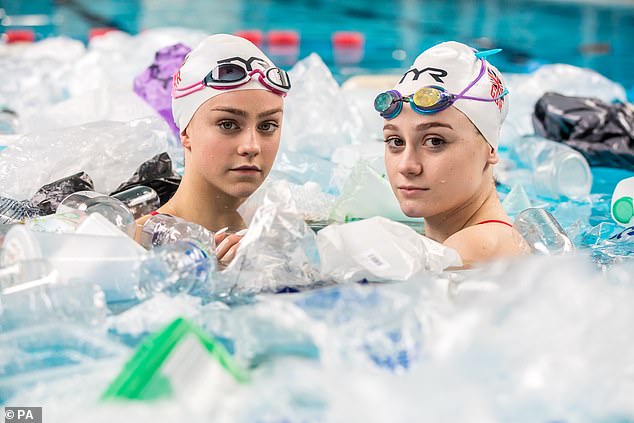 Libs staring at Wentworth defeat
How could a second referendum on Brexit happen?
Princess Anne named hardest working royal for at least third year in a row
‘Drunk halfwit’ attacks new Banksy mural painted on garage wall in south Wales
DOMINIC SANDBROOK: What family who pay £500k a DAY in tax could teach Corbyn about helping the poor
British Airways ADMITS it has delayed or misplaced 150,000 bags this year
Turkish military incursion in Syria is giving jihadists a chance to regroup
Hero police officer reveals how terrorist slashed him with knife