Neil Acourt, one of five men suspected of the racist murder of Stephen Lawrence in 1993, is set to walk free from prison next week.

Acourt, 43, will be released on Monday after serving less than half of the six-year sentence imposed on him in February 2017 for his role in a £4m cannabis smuggling ring.

Stephen Lawrence was stabbed to death by a gang of racist thugs while waiting for a bus in Eltham, south-east , in 1993.

The bungled initial investigation into his death was beset by claims of racism, corruption and incompetence.

It took nearly 20 years for two of his five or six killers finally to be brought to justice, after double-jeopardy rules were amended to allow new evidence to be presented at a later trail. 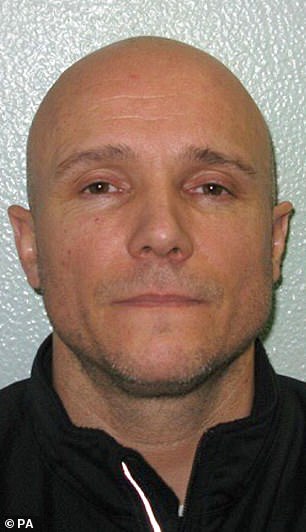 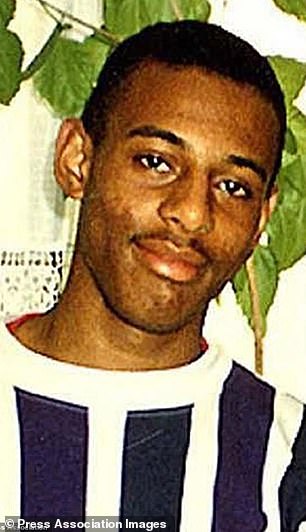 Neil Acourt (police mugshot left), one of five men suspected of the racist murder of Stephen Lawrence in 1993 (pictured right), is set to walk free from prison next week 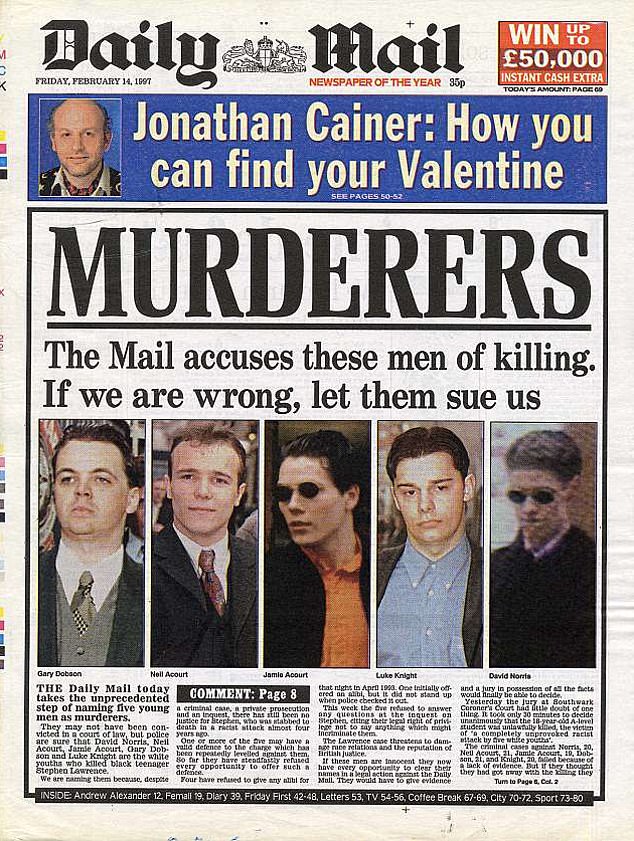 In 1997 after his inquest, the Daily Mail ran a dramatic front-page publicly accusing five men of his murder – including Acourt and his brother Jamie, who was jailed in December 2018 for nine years on drugs charges.

Now with Britain in the grip of a knife-crime epidemic which has taken 27 lives already this year, Neil Acourt – who was once filmed threatening to ‘chop up n***ers’ while miming a stabbing action with a kitchen knife – will walk free from jail.

He spent a year on remand before his trial, and is being freed on lic­ence after two years of his sentence. 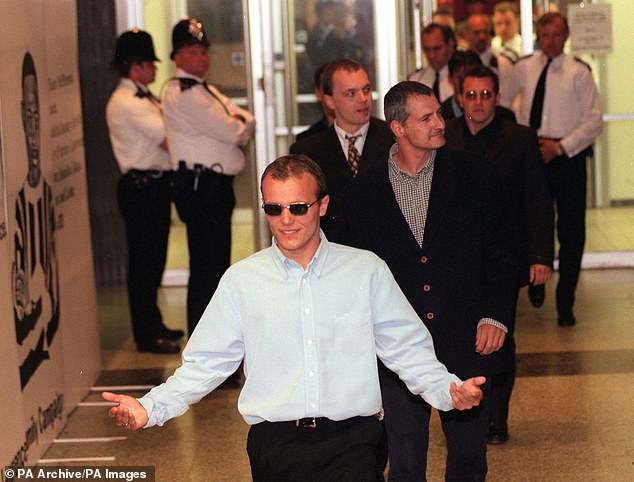 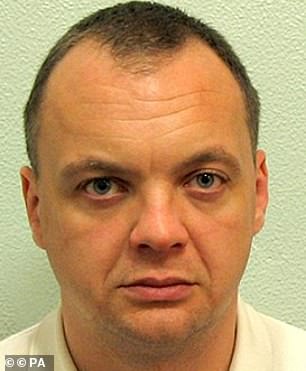 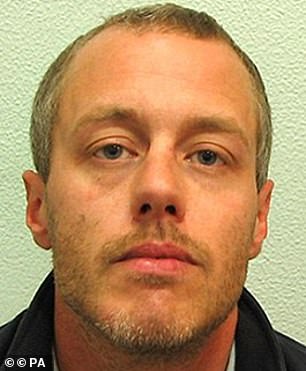 It took reform of the UK’s double jeopardy law for Gary Dobson, 41, left, to be convicted of Stephen’s murder. David Norris, right, was jailed for 14 years for the murder

A timeline of the Stephen Lawrence murder case

April 22, 1993: Stephen is stabbed to death in an unprovoked racist attack in Eltham, South-East London. Within days Neil and Jamie Acourt, Gary Dobson, Luke Knight and David Norris are identified as prime suspects.

July 1993: Prosecutors drop a case against Neil Acourt and Luke Knight. Months later an inquest is halted amid claims of ‘dramatic’ new evidence.

February 1997: An inquest jury finds Stephen was ‘unlawfully killed by five white youths’. The next day this newspaper accuses all five men under the front page headline ‘Murderers’.

February 1999: The Macpherson report finds police guilty of an appalling catalogue of mistakes and ‘institutional racism’.

April 2005: The double jeopardy principle, preventing suspects being tried twice for the same crime, is scrapped for certain offences when there is compelling new evidence.

May 2011: The Court of Appeal agrees Dobson’s 1996 acquittal for the murder can be quashed and he can be put on trial again.

January 2012: Dobson and Norris are found guilty of Stephen’s murder.

September 2016: Police announce they have received ‘significant information’ after a fresh appeal to identify a woman whose DNA was found on a bag strap left at the murder scene.

April 2018: Scotland Yard admits it has no new lines of inquiry in the investigation into Stephen’s murder and was preparing to shelve it.

reported today Acourt is currently working as a cook in a canteen at a conference centre open to the public, preparing food four days a week while on day release from jail.

The unnamed centre recently hosted a ‘Black History Month’ event to ‘celebrate the achievements of Black and Ethnic minority groups’.

Photos show him stirring a pot on a stove and serving food, although sources claimed his duties were mainly limited to ‘food presentation’.

He works closely with at least one other colleague in the open kitchen and was understood to use his mother’s maiden name, Stuart, to disguise his identity. It was unclear if ‘colleagues’ know his real name.

A source told the paper: ‘You’ve got people dying from knife crime all over the country and suddenly one of the Stephen Lawrence stab gang is released back on to the streets.’

Father-of-one Acourt is being held at Hollesley Bay open jail near Woodbridge, Suffolk, ahead of his release. He was accused of Stephen’s murder but charges were dropped because of lack of evidence in 1993.

He was filmed saying: ‘I reckon every n***er should be chopped up, mate, and should be left with nothing but f****** stumps.’

Within days of the crime, Gary Dobson, David Norris, Neil and Jamie Acourt and Luke Knight were identified by police as prime suspects.

In 2012 Gary Dobson and David Norris were convicted and jailed for life for the murder after new forensic evidence tied them to the crime.

The Met admitted last year that it had no new leads in the investigation into Stephen’s murder, but the Commissioner said this year ‘a small handful’ of officers remain working on the case.

The inquiry into the Met’s handling of the case, led by high court judge William Macpherson, accused the force of ‘institutional racism’.

It made 70 recommendations including greater oversight of the police, greater powers to discipline officers, and the definition of a racist incident to be extended to ‘any incident which is perceived to be racist by the victim or any other person’. 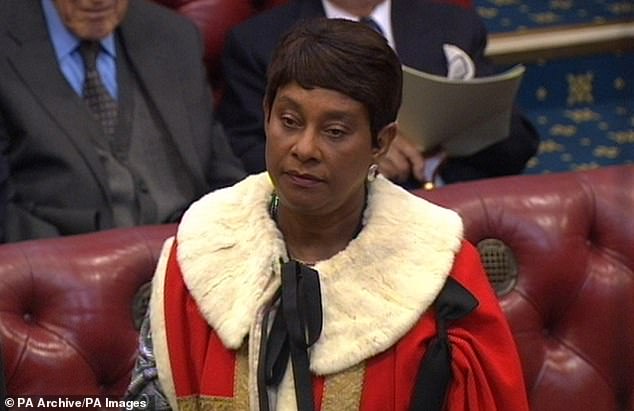 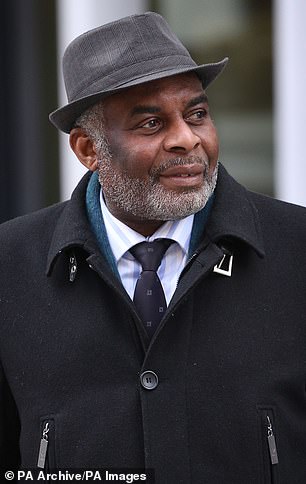 Fifty Eurosceptic Tory MPs discuss how to oust Theresa May
Michelle Obama's mother's hilarious response to Grammys appearance
Provisional IRA founding member Billy McKee's funeral is held
British tourist from London Isabella Brazier-Jones banned from USA for 10 years for taking cocaine
Dina Asher-Smith WINS 200m World Athletics gold for Britain in front of another sparse crowd in Doha
Samantha Markle lashes out over Meghan and Prince Harry's announcement
Shoppers blast Budgens for selling toilet roll for £4 that they can buy elsewhere for £2.50
Film lovers will have more than 450 films to choose from when cinemas reopen