A map showing global ‘hotspots’ for wildlife species under threat is aiming to help the work of conservationists.

The risk to 5,457 species across the world were mapped by scientists and showed a darkening colour gradient moving from the north to the south pole.

Exceptions include Australia and parts of South America, which remain yellow despite being in the southern hemisphere. 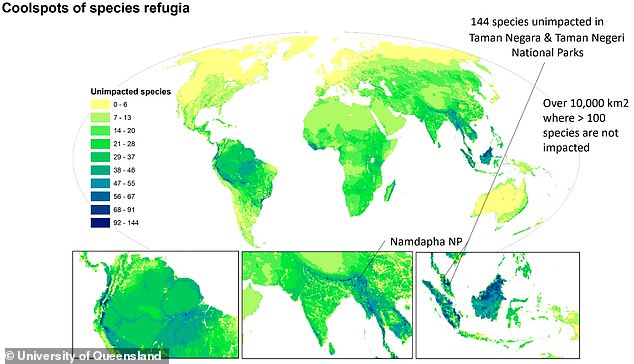 The risk to 5,457 species around the world were mapped by scientists in Australia and showed a darkening colour gradient from the north pole to the south pole that indicates increasing threat to the natural habitat of species living in those regions as a result of human activity

Cool spots include the Amazon rainforest, Andes Mountains, the tundra and boreal forests of Russia and North America.

These are notably yellow and light green in colour, and represent thriving habitats.

Areas of Southeast Asia where wildlife-rich tropical forests are increasingly threatened by expanding human impacts show up as dark green to blue.

Human impact has eaten into 84 per cent of the Earth’s terrestrial surface, and many species including lions and elephants have experienced human impact in the vast majority of habitats.

Lead author of the mapping project, Professor James Allan of the University of Queensland, said: ‘Nearly a quarter of the species assessed are threatened across nearly 90 percent of their distribution.

‘Most distressingly, 395 species are impacted throughout their entire range and will almost certainly face extinction without action to remove the threats.’ 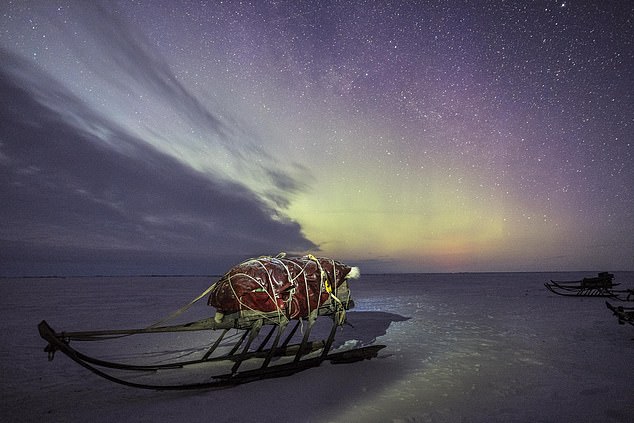 The snow-covered landscape of the tundra, meaning ‘treeless plain’ in Finnish, is the natural habitat of the Nenets people. Its extremely low temperatures means that its species are some of the least threatened on Earth and human activity is having minimal impact on the area

Professor James Watson of the University of Queensland added: ‘It is obvious that the vast majority of imperiled species that are not extinct yet, will be if we don’t take pre-emptive action.

‘We still have time to adjust and improve, but we need to use the results of this study to focus on saving those areas that as strongholds for these species.’

Professor Watson and his co-authors say that the framework presented in the paper could be used by countries striving to meet ambitious development targets such as the UN Sustainable Development Goals.

The full report of the mapping is published in the international journal PLOS Biology.

WHAT IS THE STATE OF THE EARTH’S SPECIES?

– Two species of vertebrate, animals with a backbone, have gone extinct every year, on average, for the past century.

– Currently around 41 per cent of amphibian species and more than a quarter of mammals are threatened with extinction.

– There are an estimated 8.7 million plant and animal species on our planet and about 86 percent of land species and 91 percent of sea species remain undiscovered.