is demanding an additional $8.6 billion wall for his border wall in the annual budget the White House will release later this morning.

The request in the budget that’s six times more than what he secured through his national emergency is essentially dead on arrival.

Still, the White House is highlighting Trump’s desire to build 722 miles of barriers along the border as a way to combat drugs and crime with the allocation in the mandatory document outlining his preferred fiscal year 2020 spending.

‘As you know this is an area where we’re tired of being right,’ said acting Office of Management and Budget director Russ Vought on CNBC on Monday morning.

‘The border situation is deteriorating by the day. When we started the conversation throughout last year, Democrats were saying there’s no national emergency. They’re still saying that,’ he said. ‘But I don’t know how you can continue to make that assertion.’

The White House’s fiscal year 2020 budget proposes a five percent increase in defense, taking military spending up to $750 billion, up from $716 in the current fiscal year. 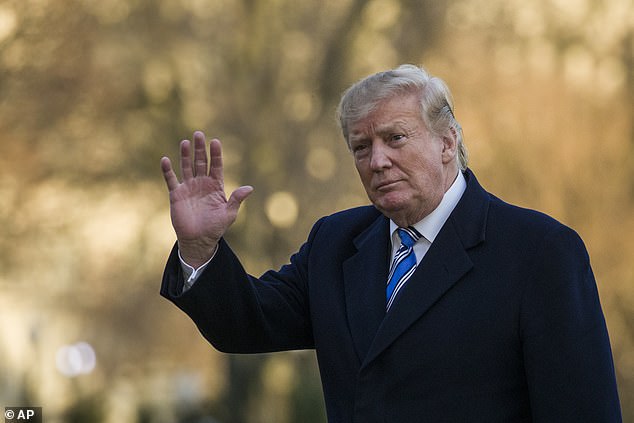 President Trump is demanding an additional $8.6 billion wall for his border wall in the annual budget the White House will release later this morning.

‘We think it’s important to continue to rebuild the military from the years of the Obama administration,’ he said.

Vought claimed in advance of the release that the budget ’embodies fiscal responsibility, and takes aim at Washington’s waste, fraud, and abuse’ by shaving $2.7 trillion, or five percent, off the previous fiscal year’s nondefense, discretionary spending.

‘We hope they have an interest in maintaining and getting rid of the deficit,’ Vought said on CNBC.

The administration projects that it would be able to end deficit spending in 15 years at this rate.

Fiscal conservatives within the Republican Party have typically aspired to balance the budget in 10 years in their opening bids to Congress. 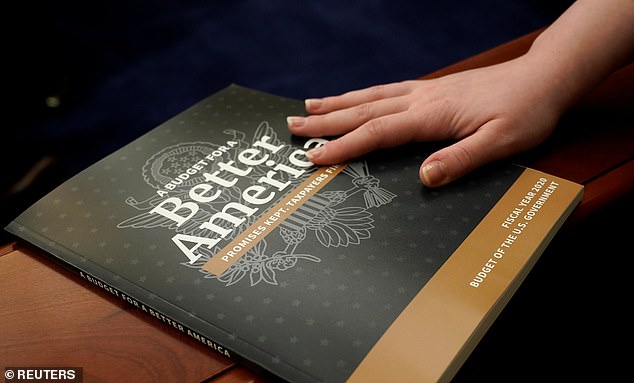 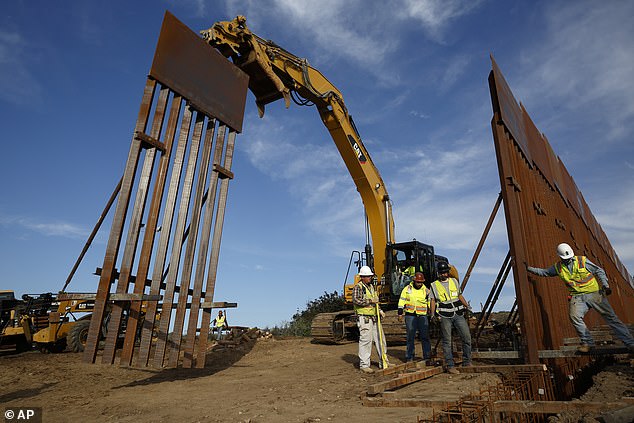 Trump’s proposed increase in military spending and his commitment to leaving entitlement programs like Social Security and Medicare out the equation had White House economists admitting that it would take significantly longer to meet that goal.

‘Long term policy projections indicate that the proposals in this Budget would put us on track to reach balance by 2034,’ the White House said in its talking points. ‘This is a clear roadmap for a more fiscally responsible future if Congress chooses to follow it.’

One of his top priorities is border security. The White House claims that the ‘crisis at our southern border has strained Federal resources and overwhelmed agencies charged with border security and immigration enforcement.

‘The Federal Government must employ all lawful means to enforce the immigration laws of the United States and reduce the flow of illegal aliens and illegal drugs into the country,’ it says. ‘The Budget requests the resources necessary to continue constructing physical barriers on the border, increases the manpower of ICE and CBP, and proposes policy changes to end sanctuary cities.’

Trump’s defense plan reiterates his national security strategy’s aims of achieving  ‘peace through strength’ and restoring America’s competitive advantage by investing in capabilities such as space, artificial intelligence, and hypersonics.

Other highlighted areas include money to combat the opioid epidemic, higher education reforms, resources for veterans IT modernization within the federal government.

The administration proposes to put  $80 billion toward healthcare for vets – which is roughly a 10 percent increase from the current fiscal year – for ‘veteran rehabilitation services, education and employment assistance, and suicide prevention.’