‘Earthy’ resembles our planet with the addition of arms and legs and was sent up in the capsule to measure the gravitational force at work inside.

It has since been kept hostage by astronauts on the International Space Station (ISS).

Three astronauts on board have been ‘going crazy’ for the toy since its arrival, posting pictures of it on their accounts.

It arrived in the capsule along with a dummy called Ripely, named after the lead character from the ‘Alien’ movie franchise.

They finally ‘kidnapped’ the toy and did not allow it to return it to Earth in the capsule with the rest of the original cargo. 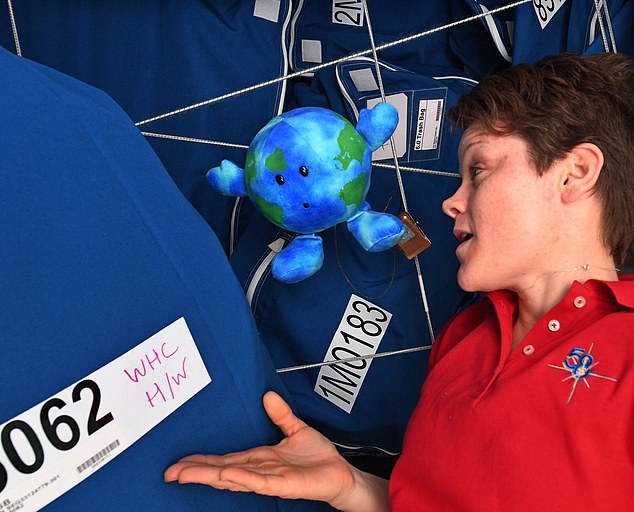 SpaceX’s capsule ‘Crew Dragon’ successfully returned to Earth on Friday, fully-intact but with one item missing: a soft toy called ‘Earthy’ (pictured) which has seemingly been adopted as the the ‘forth’ member of the team. It has been spotted on social media alongside the astronauts

Unlike Earthy, Ripley, a mannequin which was sent up to the ISS to take a range of measurements, arrived back on Earth in the capsule she left in.

Earthy has seemingly been adopted as the the ‘forth’ member of the team, and has  been dressed up with various ‘accessories’ that the astronauts themselves put on.

Ms Marie, who appears somewhat obsessed with the toy on social media, has featured him in nearly all of her Twitter posts since the capsule arrived on Sunday March 3.

Earthy has appeared in 16 of astronaut Anne McCain’s photographs on Twitter.

It has been spotted in various guises inside the International Space Station, including in a 3M face mask pictured alongside Ms McCain.

Earthy has also been seen wearing a data measuring headband and connected up to a laptop while accompanying Ms Marie on the treadmill during her morning ‘exercises’.

The toy also featured prominently in a video broadcast by the three astronauts on . 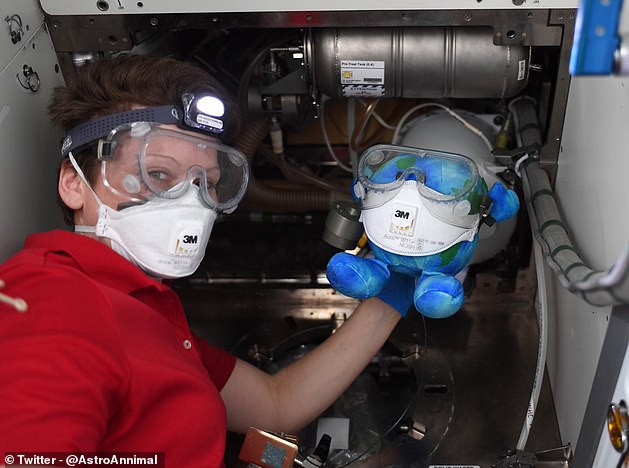 He has been spotted in various guises on the Space Station, including in a 3M face mask alongside astronaut Ann McCain. Earthy arrived in the capsule ‘Dragon Crew’ over a week ago but has not returned alongside the rest of its contents, which included a dummy astronaut 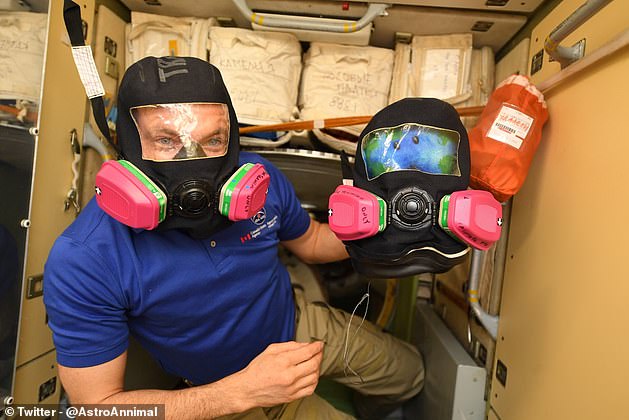 David Saint-Jacques, one of the three astronauts on the Space station, has also taken a liking to the toy, which was seen donning an ’emergency mask’ alongside him 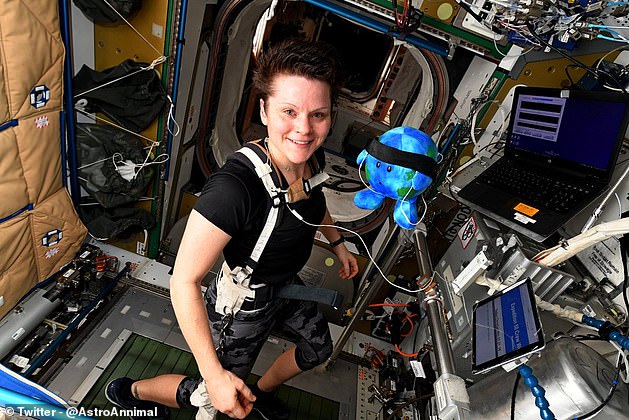 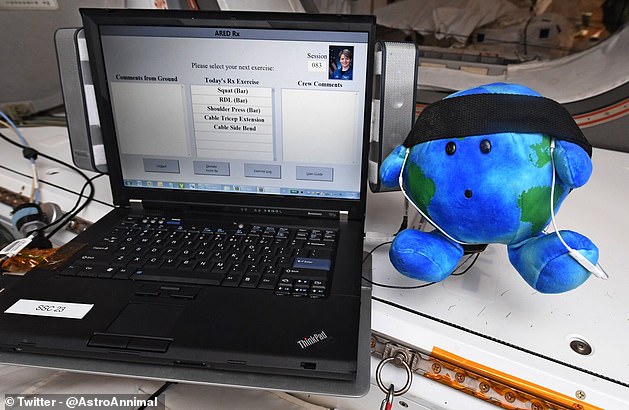 David Saint-Jacques, one of the three astronauts on the Space station, has also taken a liking to the toy, which was seen donning an ’emergency mask’  alongside him.

The picture was posted by Ms McCain, alongside a picture of the toy drinking coffee through a special straw.

The Twitter post said: ‘Earth’s second day on @Space_Station started early, but he was happy to learn that even in space, the day starts off with coffee. Then it was emergency mask donning practice with – if there’s an (unlikely) ammonia leak, we have just seconds to protect ourselves.’

The soft toy was also spotted with another ‘toy’ member of the crew, in what Ms McCain called a ‘candle light dinner’ that featured a packet of prawns.

Her post read: ‘…then a favorite of the crew, group dinner! The candlelight dinner was also attended by Paxi, who is from @esa’. 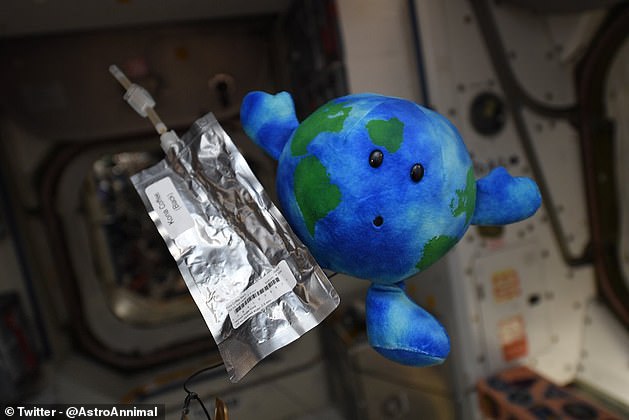 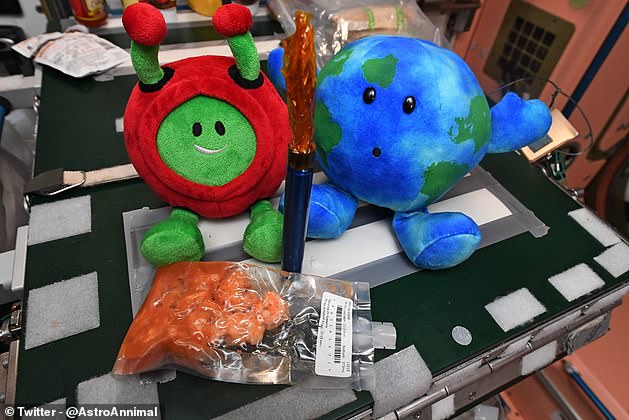 Another picture of Earthy with food, alongside ‘Paxi’ from the European Space Agency (ESA), wrote Ms McCain on a Twitter post, during a ‘candlelit dinner’ that featured a packet of prawns

SpaceX’s Dragon capsule completed its ground-breaking mission to the International Space Station (ISS) with a picture-perfect landing in the Atlantic Ocean on Friday .

The blackened but otherwise perfectly intact capsule was lowered into the water by four red and white parachutes that deployed from within the nose of the spacecraft.

It descended from the heavens perfectly on schedule, reaching Earth’s surface at exactly 13:45 GMT (8:45 ET).

NASA marked the moment with a tweet, reading: ‘Successful splashdown of the #CrewDragon right on time at 8:45 a.m. ET.’ 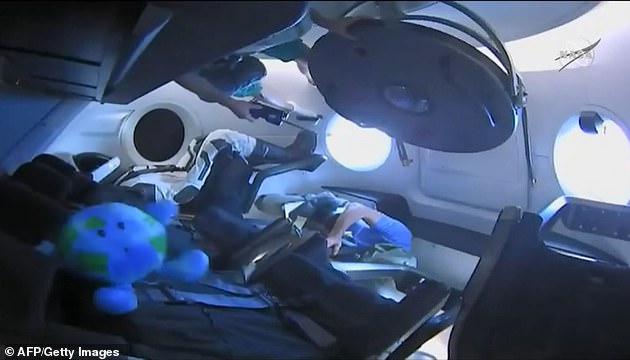 The mission included a dummy named Ripley (pictured), outfitted with sensors on its head, neck, and spine to monitor how a flight would feel for a human, seen here inside the Crew Dragon after the opening of the hatch during the Demo-1 mission together with Earthy (left)

The first-of-its-kind mission, ahead of SpaceX’s crewed test flight slated for June, it brought 400 pounds of test equipment to the space station.

A SpaceX rocket had launched the 16-foot-tall (4.8 metre) capsule from the Kennedy Space Center in Florida.

The capsule’s approach as seen on the Earth’s horizon from the station represented ‘the dawn of a new era in human spaceflight,’ McClain tweeted when the capsule arrived.

The mission marks the first time a private company has ever been to the ISS and the lack of drama during its hyper-sonic re-entry through Earth’s atmosphere to a pre-determined point 280 miles (450 km) off the coast of Florida.

Quick response vessels scrambled to the capsule as a recovery boat, dubbed GO searcher, was tasked with stabilising the spacecraft and bringing it to solid land. 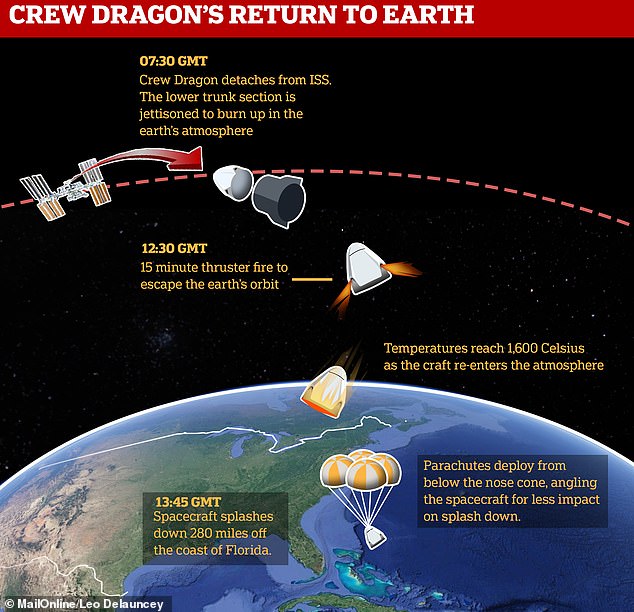 Re-entry and successful landing was the final hurdle of the six-day test flight which has so far gone without a hitch following a perfect launch and docking. All three major stages of the mission – launch, docking, undocking and landing – all went smoothly 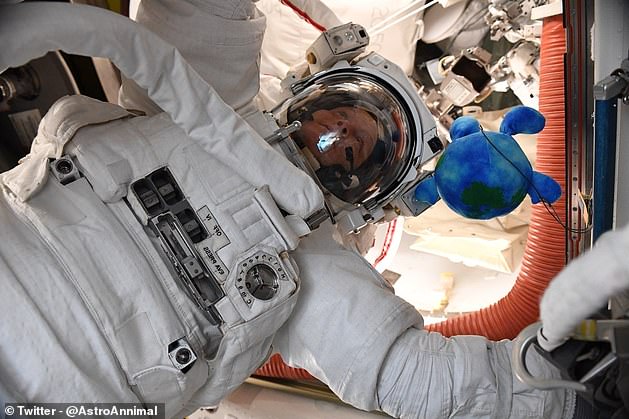 Unlike Earthy who was ‘kidnapped’ by the International Space Station crew, ‘Ripley’ named after the astronaut from the film ‘Alien’ made it back to Earth on board the capsule 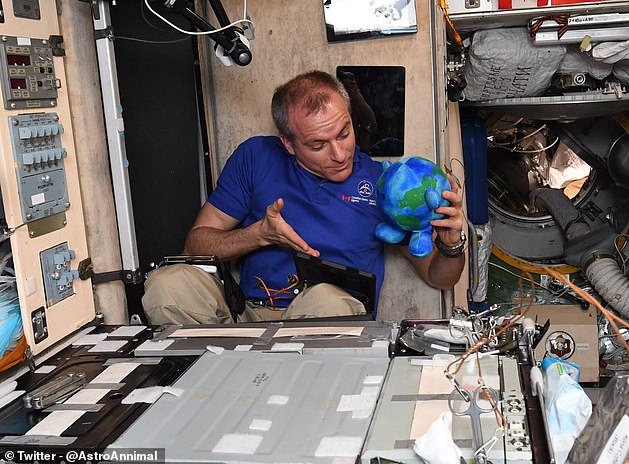 Meghan Markle at the British Fashion Awards
Duchess of Cornwall at Lord Carrington's memorial service
Australian man found unconscious on Everest after ten climbers died on mountain in just nine days
Bercow spends £13,000 on three-day Canada trip and £113 a month on Sky
Tory Brexiteers accuse John Bercow of trying to 'game the system' over who will replace him
Mercury in Retrograde is on its way meaning three weeks of chaos
Real-life Rapunzel reveals fans of her 6ft-long locks ask if they can SNIFF it
Birmingham is hit by new lockdown as people are banned from mixing with ANYONE outside their house