Happy Birthday Barbie! The iconic doll turns 60 today, and despite decades of complaints from feminist activists about her figure, her hair, her skin colour, her Zeppelin breasts and her potentially negative impact on the minds of impressionable little girls, she is still going strong.

More than 58 million Barbies are sold each year in more than 150 countries, and manufacturer Mattel has bent over backwards — just like Yoga Barbie — to make the original more compelling, inclusive, racially diverse and friendly.

Horrifying to think that Bus Pass Barbie may now only be a few years away from collecting her Barbie Pension, but at least she has moved with the times. 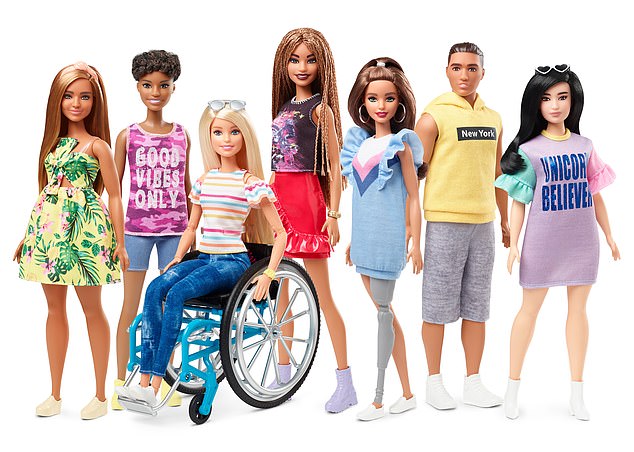 More than 58 million Barbies are sold each year in more than 150 countries. Manufacturers Mattel claim that over the doll’s production history they have tried to make the toy more inclusive, racially diverse and friendly

These days, Barbie comes in a wide variety of sizes, colours and shapes to combat the age-old complaints that the original blonde, plastic doll conveyed an idealised and unrealistic body image.

But she still wouldn’t be able to walk if she was human, insist her detractors.

Yet the likes of Kim Kardashian and Kylie Jenner, who seem to be little more than millennial Barbies made flesh, seem to manage just fine.

And with their diamonds, nude selfies and lavishly lazy lifestyles, some might argue that they are a far more pernicious influence than Barbie on impressionable young minds. And she doesn’t just loll about putting on lipgloss while waiting for Kanye to come home.

With more than 40 pets, swimming pools, stables and a three-storey house to look after, Barbie is super-crazy busy.

She has more than 200 pastimes, such as bee-keeping, snorkelling and baking to keep her occupied and relevant between careers, plus, Barbie Pony’s pink mane is not going to plait itself, is it?

Our girl has no shortage of transport choices to whisk her between these exciting appointments, including a helicopter, a pink sports car and her very own ambulance, complete with bandages, plaster casts and what the Amazon website accidentally calls ‘a pair of crotches’.

It is an easy mistake to make!

Critics looked at the prototype Barbie, launched at the American International Toy Fair in New York on this day in 1959, and saw a highly-sexualised beauty contestant, wearing a black-and-white strapless bathing suit and high heels.

To them, Barbie was not an innocent doll, but a turbo-chested playgirl with the kind of blank-eyed expression that suggested she belonged to a cult.

From then on it was war between those of us who adored her obvious virtue and goodness, versus her detractors, who saw bad influences in her every curve. Even now, it’s still hard to know which horse to back in the great Barbie derby — is she a feminist icon or a sexual fantasy freak?

Sometimes the opprobrium levelled against poor old Barbie gets exhausting. After all, generations of us happily played with our Barbies without becoming anorexics or growing up warped and sad because we didn’t have tippy-toe feet, glossy hair and a wasp waist.

We realised she was a plaything, a cipher, a gateway into an inspiring world of make-believe.

Before Barbie, dolls were mostly replicas of babies, such as the hugely popular Tiny Tears. This limited role-playing to the maternal; you were either mummy or nursie, and that was your lot. No wonder that kid was always crying. In contrast, Barbie was a career girl at a time when that was still unusual, or, at least, in the minority.

She had a boyfriend called Ken, who came along two years later, but this dull boy was always the least interesting thing about her.

For Barbie was independent, she led an exciting life, she let the prepubescent imagination soar and she encouraged ambition. Stultifying dreams was the last thing on her tiny mind.

In 1965, the world was her oyster-coloured spacesuit when Astronaut Barbie was launched to the delight of millions of little girls. That decade also saw the emergence of Surgeon Barbie (admittedly in miniskirt scrubs), Olympic Medallist Barbie, Executive Barbie and University Graduate Barbie. What is not to love?

Undeniably, there were times when she did nothing more than sit in front of her Barbie mirror, combing her Barbie hair with her Barbie brush. But that was fine, too. We have all been there. (Kim is, indeed, still there, but we have moved on.)

Today, there is a bigger variety of Barbies than ever before.

In 2016, Mattel launched the Fashionista line, a more nuanced range which offered three new body types — tall, curvy and petite — plus an expanded choice of skin tones, hair textures and face shapes. No matter what colour or shape, it is good to see that 60‑year-old Barbie is just as ambitious as ever.

Entrepreneur Barbie could have come straight from The Apprentice boardroom. ‘If you can dream it, you can be it,’ is her slogan, in an effort to encourage pre-teens to break the plastic ceiling.

Over the years she has been a doctor, a vet, a palaeontologist, a nuclear physicist, an air hostess a firefighter, a pop singer, a teacher, a film star and a supermodel. She has even been a presidential candidate, but she took time out to still be interested in animals, food, her appearance and the world around her.

There has been a Masai Barbie, a Princess of Ireland Barbie and India Barbie, who carries a monkey around with her rather than a handbag.

There is a Political Candidate Barbie in a Chanel jacket who looks amazingly like Amal Clooney and a Barbie Princess Doll who comes complete with her own castle, throne and pink tea set — remind you of anyone?

There is already a Barbie Merman, complete with pearl-escent tail, and it can only a matter of time before Gender Fluid Barbie hits the shelves — and when they do, we’ll love them just as much.

In the meantime, happy birthday, doll!