Celebrity Apprentice fans were left in utter hysterics during Friday’s special, as they spotted the receptionist watching cat videos during the tense boardroom scenes.

Taking to in droves, viewers joked that the employee should be ‘fired’ by Lord Sugar for her negligence, as she also played Solitaire and Pac-Man as part of the running gag.

The show’s conclusion saw the Girls team come out on top after earning more money with their charity cabaret, while the Boys loss saw Omid Djalili fired. 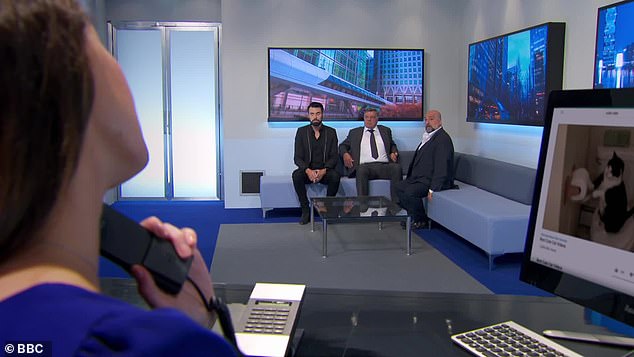 Hilarious: Celebrity Apprentice fans were left in hysterics during Friday’s Comic Relief special, as they spotted the receptionist watching cat videos during the tense boardroom scenes

During the show, both teams were left on tenterhooks as they waited to meet Lord Sugar in the boardroom after both the Girls and Boys hosted their cabaret showcases.

As the receptionist said they could enter the boardroom, many fans spotted that she was playing solitaire on her computer.

But this proved far from just an on-screen blunder, as later scenes also saw the receptionist playing Pac-Man, and in the final scenes she was watching a cat video. 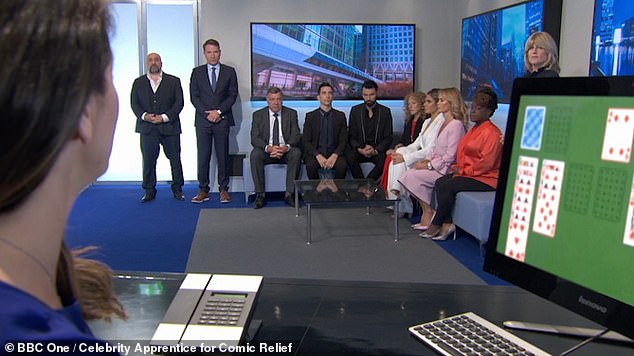 Oops! Eagle-eyed viewers spotted that the receptionist outside the boardroom was far from hard at work, as she first played solitaire on her computer 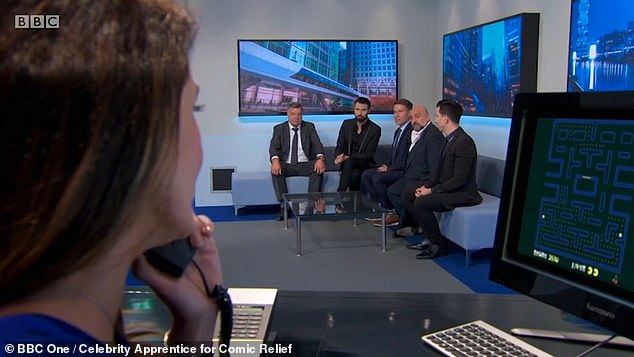 Awkward! When the receptionist was seen again, she was instead enjoying a game of Pac-Man

Many viewers took to social media to point out the playful gag, with a divided Twitter suggested she should be both hired and fired.

A third posted: ‘LOOOL THE RECEPTIONIST.’ 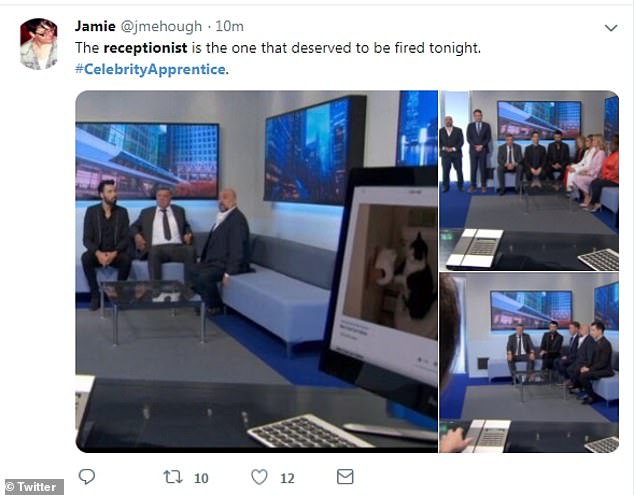 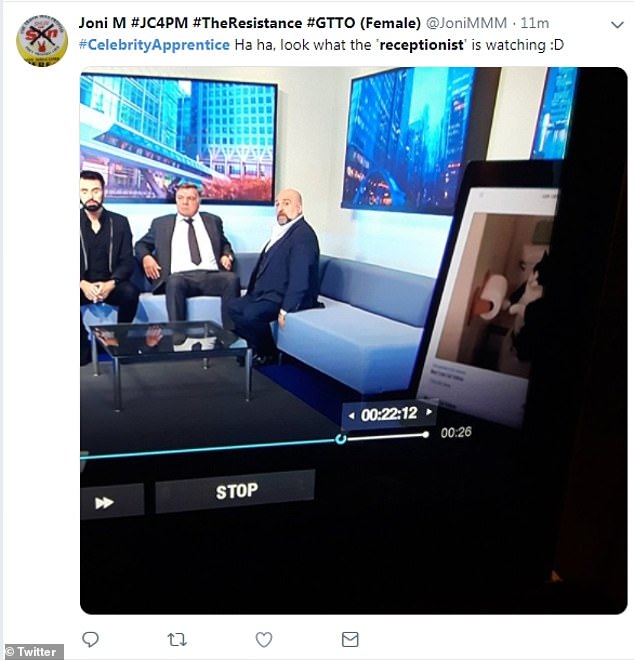 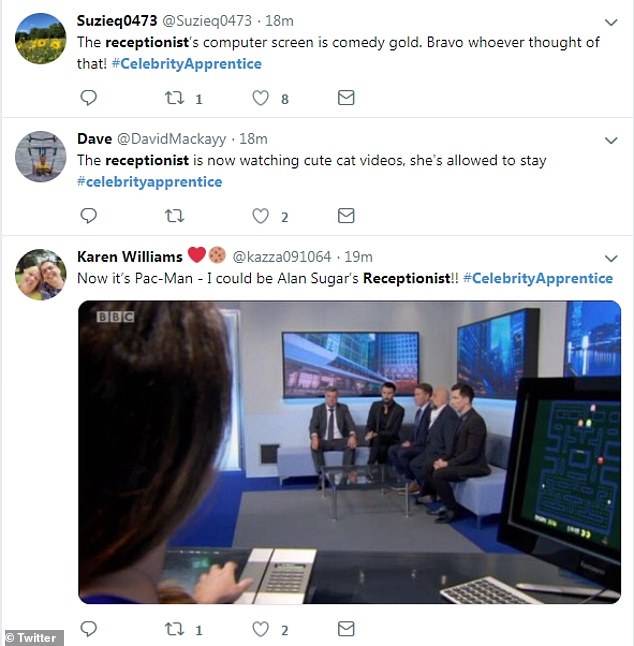 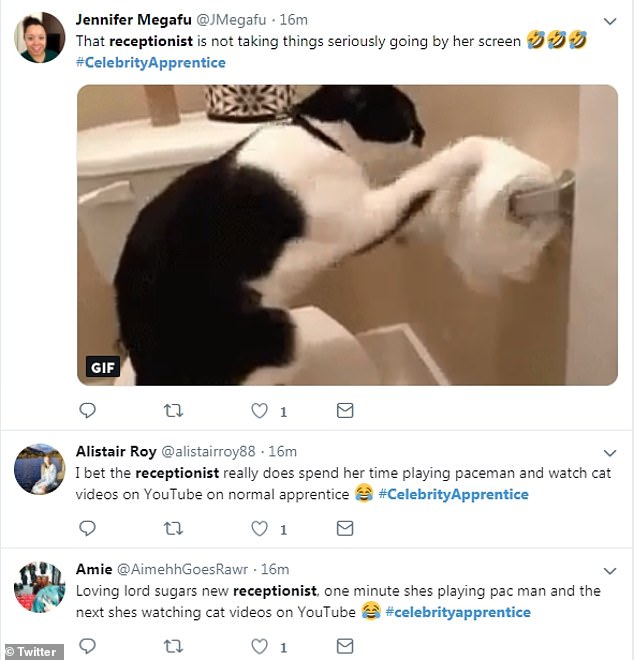 Funny: Many viewers joked that the receptionist should be both hired and fired, as she was also seen playing Pac-Man and Solitaire 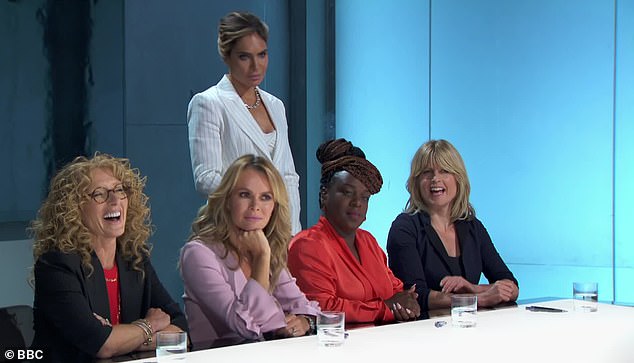 Success! Celebrity Apprentice came to a dramatic conclusion on Friday, as the Girls came out on top after raising the most money for Comic Relief with their cabaret show 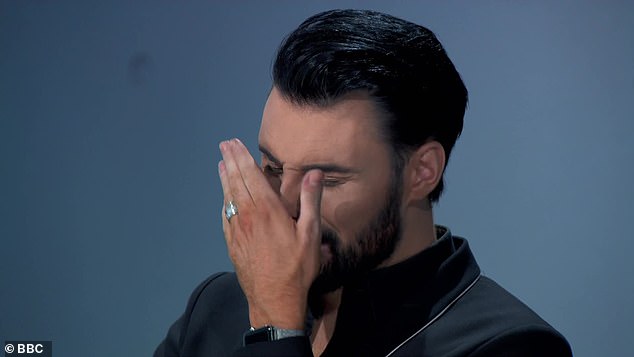 Shock: As project manager of the Boys team, Rylan Clark-Neal was left in the firing line, but narrowly avoided Lord Sugar’s most famous line

Celebrity Apprentice came to a dramatic conclusion on Friday, as the Girls came out on top after raising the most money for Comic Relief with their cabaret show.

Sadly this left the boys – and project manager Rylan Clark-Neal – in the firing line, as he brought in Omid and Sam Allardyce for the final boardroom assessment.

Lord Sugar eventually decided that Omid was to blame for their poor returns, after failing to deliver on a promise to book Cher for the cabaret.

The comedian did not take the news well and shouted at Lord Sugar that HE was fired, before storming out of the boardroom.

Comic Relief airs on Friday 5th March on BBC One and Two. 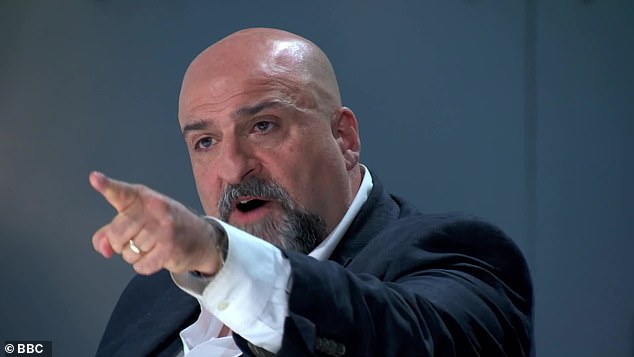 Raging: Comedian Omid Djalili was left fuming after being fired, having failed to deliver his promise to book Cher for the cabaret show