A meningitis survivor has revealed she sacrificed her lower leg in a bid to accomplish her dream of becoming a paralympic snowboarder.

It came thirteen years after she nearly lost her life, aged 13, to bacterial meningitis, spending eight months in hospital and needing over 20 surgeries.

Now, with renewed confidence and a year of recovery, the mother-of-two believes snowboarding is her therapy and hopes to compete internationally. 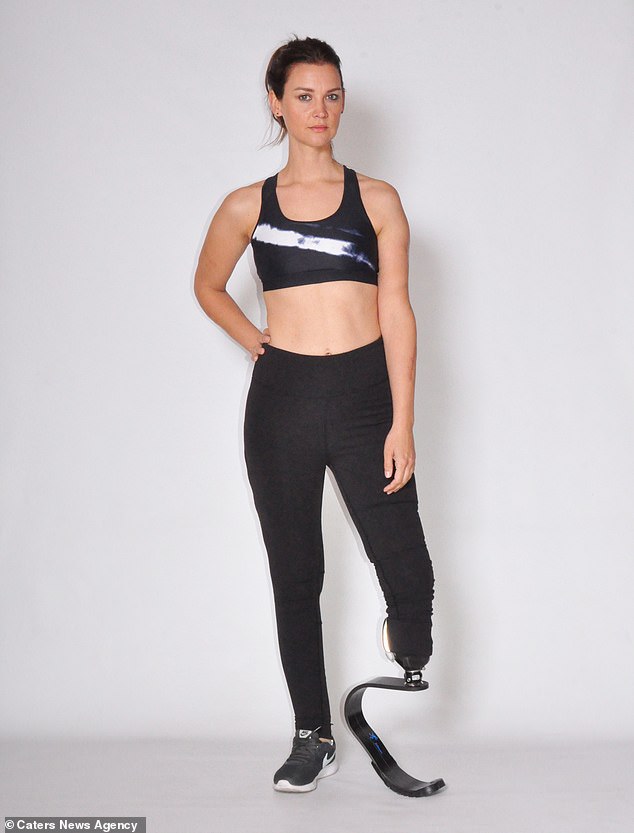 Substitute: After years of pain and mobility issues, Marleen Verbeek decided to have her lower leg removed and now walks with the aid of a prosthetic limb 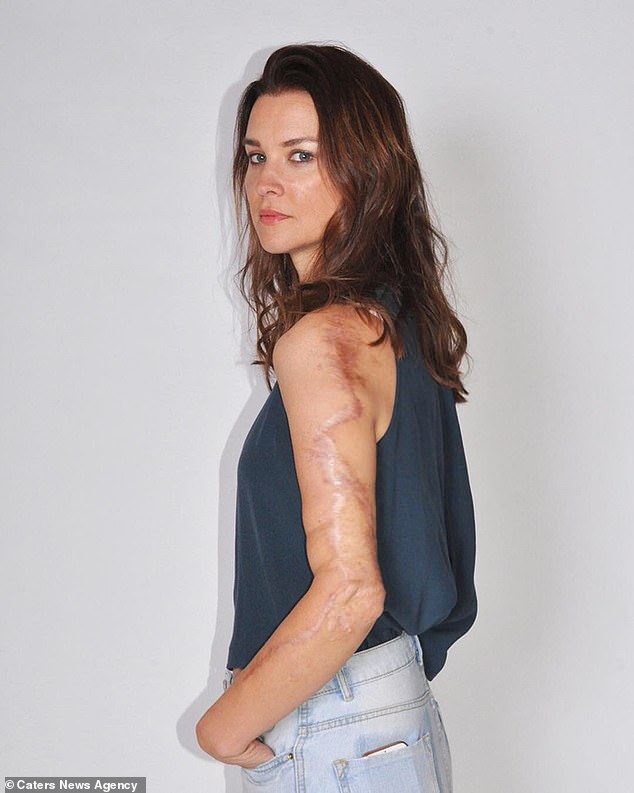 Survivor: Ms Verbeek, 39, from Madrid, Spain, opted for the dramatic surgery in 2016 after falling victim to bacterial meningitis when she was just 13

The deadly infection damaged 35 per cent of her skin, causing injuries similar to a burn mainly to her legs and feet, but also her arms and face.

Surgeons were forced to remove sections of her ‘partly black’ and ‘half dead’ feet, her ankle and calf muscle.

In 2006, after years of pain and mobility issues, Ms Verbeek would later go onto have muscle from her upper right leg transferred to her left foot.

But after the pain worsened again, she chose to amputate her lower left limb nearly three-years-ago.

Ms Verbeek, an e-coms sales manager, said: ‘I wanted to be able to play ports, snowboard, dance and after seeing Paralympians I thought I have more leg than they do but can do less.

‘It was really important to be able to snowboard, I felt it was my therapy.

‘I knew if I could do that, I could give my body back some confidence and beat it somehow.’ 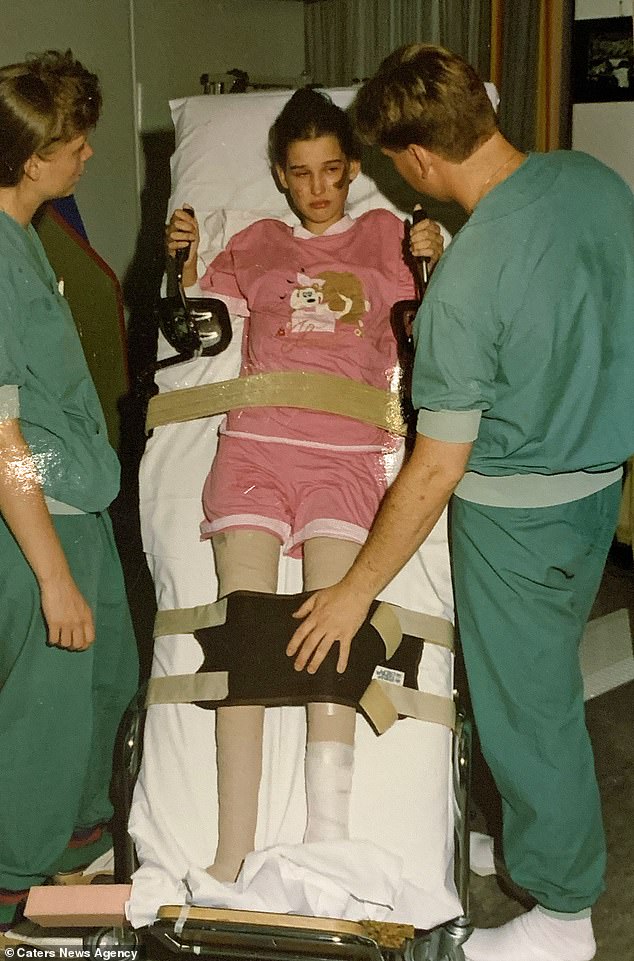 Trauma: The deadly infection damaged 35 per cent of her skin, causing injuries similar to a burn mainly to her legs and feet, but also her arms and face

She added: ‘It was super hard, I’ve been doing it for over a year, the first time I went on a snowboard, I was in so much pain, but I kept going and eventually learned.

‘I’ve also recently got a running blade to be able to run and dance, I do it a lot and have achieved a lot in snowboarding too.

‘When I snowboard, I’m so concentrated and in the moment that I forget about everything and just feel so powerful and liberated, it really makes me happy. It’s my therapy to help me deal with frustration and pain, I feel exhilarated.

‘Now I want to go faster, looked cooler doing it, and train for the Paralympics.’

Ms Verbeek, who grew up in Roosendaal, The Netherlands, was thought to be suffering with the flu in the build up to her birthday.

But after blue spots began to erupt over her body a doctor was called for by her mother.

‘Once the doctor saw my legs, he knew what it was and an ambulance came to my house, by this point my toenails were already black.’ 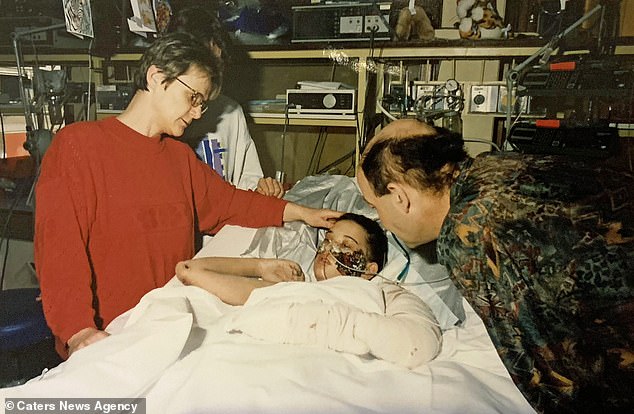 Scary: Marleen with her parents in 1993 after being taken into hospital when suspicious blue spots appeared on her body following flu symptoms 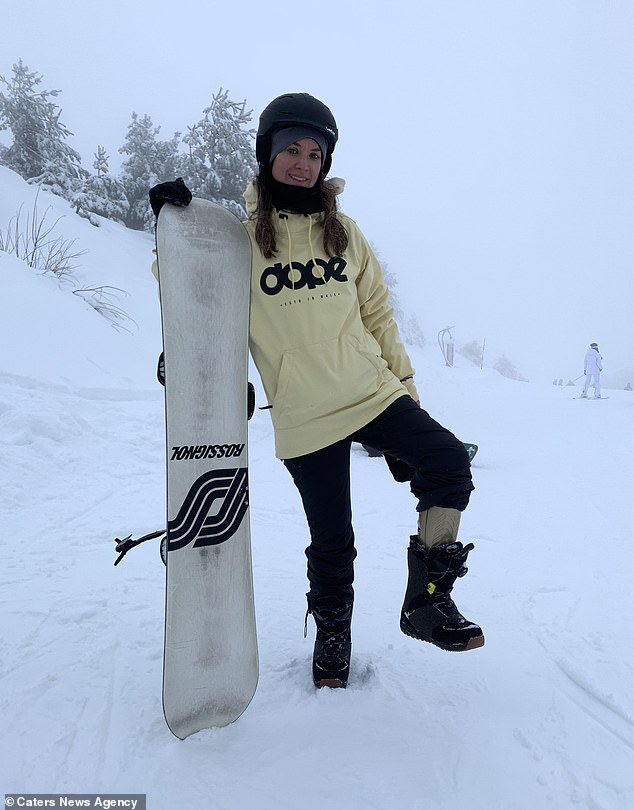 On the slopes: Ms Verbeek has  detailed how snowboarding has become an unlikely form of therapy for her life after the illness ravaged her body

‘In hospital the doctor came in and told me he was going to put me to sleep for a little while. I wasn’t scared at all, as I didn’t really understand what was going on, until my father told me, ‘Marleen, you have to fight for your life’.

‘My father is a very sentimental person and would cry often, I remember promising him that I wasn’t going to die.’

The deadly form of meningitis severely damaged her body and skin, requiring regular surgery during the first couple of weeks at her worst points.

‘It affected everywhere but mostly my feet which were black and half-dead, I had damage to 37 per cent of my legs, my left, arm and feet, that were like third degree burns,’ she added.

‘My feet were black and half dead, doctors decided to amputate part of both of my feet.’

Ms Verbeek would relearn to walk but explains how the scarring from extensive skin grafts, left her battling self-confidence issues.

‘I used to hide everything, feel ashamed and didn’t want to be different, so I would wear long sleeves and long pants.’

But after deciding to amputate her lower leg in 2016, the mum has a new-found hope and feels less embarrassed by her scarring. 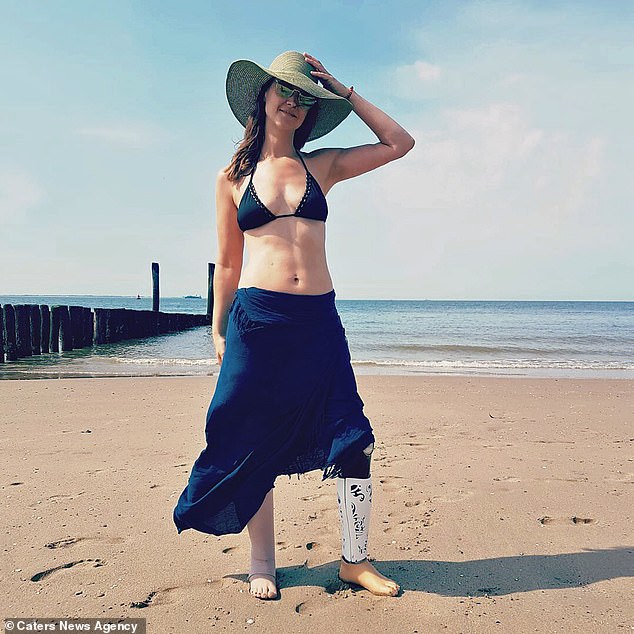 Image-conscious: Ms Verbeek would relearn to walk but explains how the scarring from extensive skin grafts, left her battling self-confidence issues 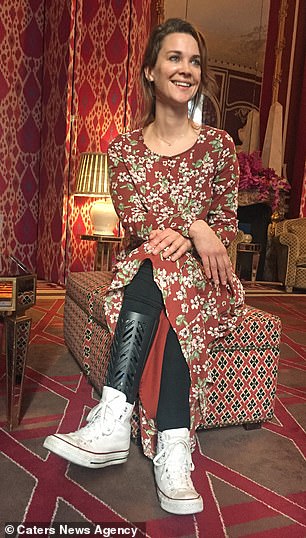 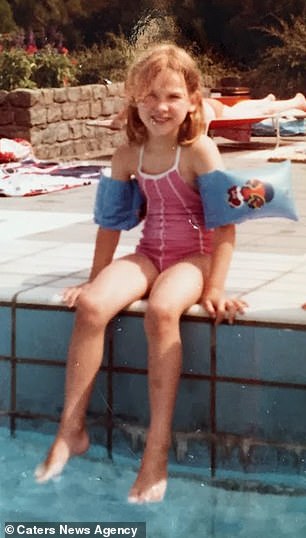 After deciding to amputate her lower leg in 2016, the mum (pictured left) has a new-found hope and feels less embarrassed by her scarring. Right, as a young girl.

She attributes this to being able to partake in sport, as well as since joining Models of Diversity who have helped her to land modelling gigs.

Angel Sinclair, found of Models of Diversity, said: ‘It’s important that models with disabilities are given equal opportunities as abled bodied models in fashion.’

Ms Verbeek added: ‘I think doing sports have given me more confidence and since the amputation I feel I’ve been able to show others it’s ok to be different.

‘When I see myself in the mirror, I notice the scars on my legs every time, but now I know they are there to show the struggle and war my body has gone through.

‘I could have died, so my scars are a sign that I survived and strength, instead of weakness.’

Last year, the mum has landed modelling opportunities including in a Mercedes commercial. ‘Modelling and snowboarding have been my therapy, they have helped by putting me in scary positions I never thought I would be able to do.

‘We should embrace our differences and not be scared of them or hide them.’ 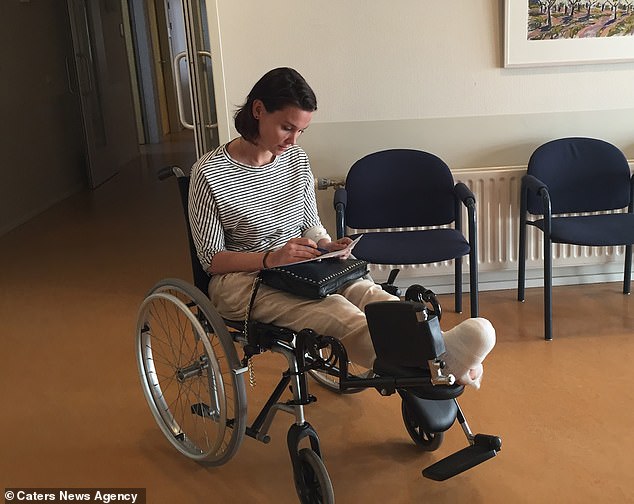 Stoic: ‘I could have died, so my scars are a sign that I survived and strength, instead of weakness,’ the 39-year-old says philosophically about her ordeal

Meningitis is inflammation of the membranes that surround and protect the brain and spinal cord.

Anyone can be affected but at-risk people include those aged under five, 15-to-24 and over 45.

People exposed to passive smoking or with suppressed immune systems, such as patients undergoing chemotherapy, are also more at risk.

The most common forms of meningitis are bacterial and viral.

Symptoms for both include:

Headache is one of the main symptoms

Some 10 per cent of bacterial cases are fatal.

Of those who survive, one in three suffer complications, including brain damage and hearing loss.

Limb amputation is a potential side effect if septicaemia (blood poisoning) occurs.

Vaccines are available against certain strains of bacteria that cause meningitis, such as tuberculosis.

Viral is rarely life-threatening but can cause long-lasting effects, such as headaches, fatigue and memory problems.

Thousands of people suffer from viral meningitis every year in the UK.

Although ineffective, antibiotics may be given when patients arrive at hospital just in case they are suffering from the bacterial form of the disease.