Hours after Taylor Swift’s accused stalker broke into the singer’s New York apartment, he appeared in court with his face downcast.

Roger Alvarado, 22, appeared in Manhattan Criminal Courthouse on Thursday afternoon where he kept his head down and nervously bit his nails.

Alvarado was arrested for allegedly breaking into the second-floor patio door of Swift’s Tribeca home around 2.20am Thursday morning. The singer was not home at the time.

This is the second time in less than a year Alvarado has broken into the Shake It Off singer’s apartment. 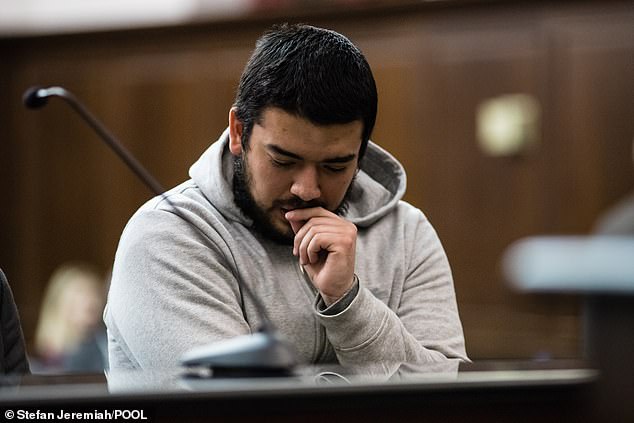 Roger Alvarado, 22, appeared at his arraignment at the Criminal Courthouse in Manhattan on Thursday hours after he allegedly broke into Taylor Swift’s New York apartment 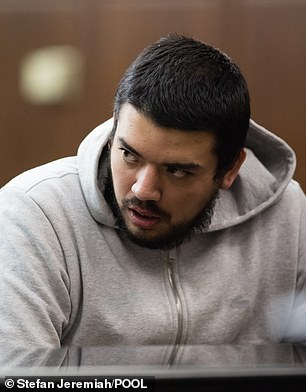 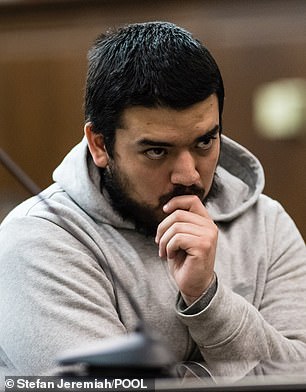 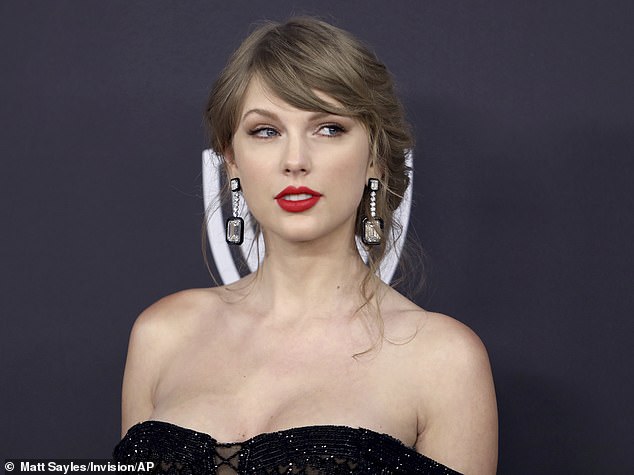 Just 30 days after he was released from a Florida jail, Alvarado broke into Taylor Swift’s Tribeca apartment at 2.20am

Cops were called to the scene and police officers found the door open in the home and said Alvarado had allegedly ‘ransacked the place’.

Alvarado had climbed a ladder to a second-floor patio and smashed a glass door with a concrete block to get inside. He had also left a computer tower near the door.

Alvarado has been charged with stalking, burglary and criminal mischief.

It’s at least the third time he’s been found at Swift’s home.

Police were seen escorting Alvarado out of the 1st Precinct located at 16 Ericsson Place Thursday afternoon. 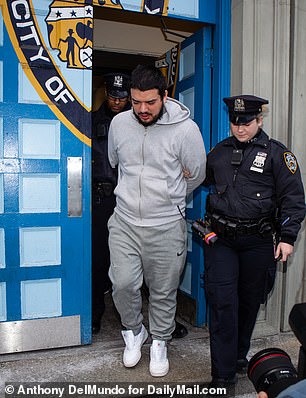 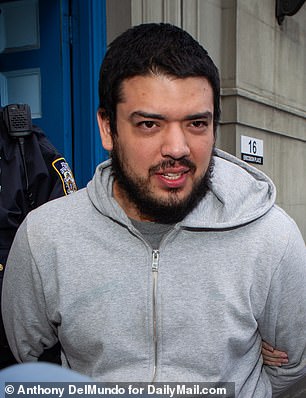 New York City police have arrested Taylor Swift’s accused stalker, Roger Alvarado (left and right) for breaking into her home again. Police escorted him out of the 1st Precinct later on Thursday 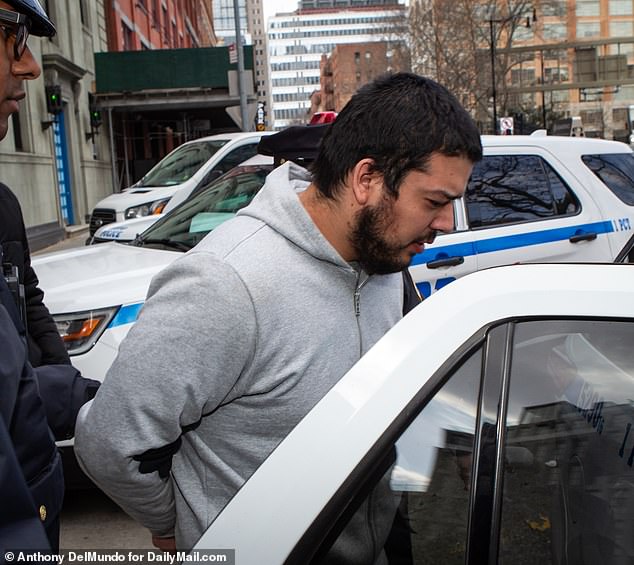 Holding his head down, Alvarado was then put in the back of a patrol car 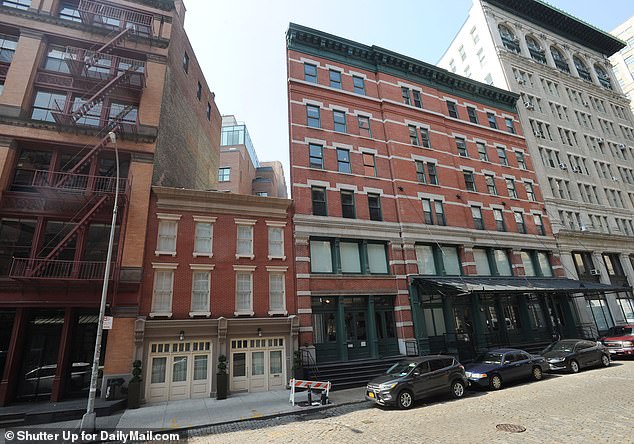 At the time, Alvarado was spotted climbing a ladder and smashing a window of the apartment building (above the garage, center), which is connected to the building she actually lives in, with his hand to gain access before he made himself at home and hopped in the shower

Holding his head down, Alvarado was then put in the back of a patrol car.

He was sentenced to six months in jail for breaking into the pop star’s home in April 2018 when officers found him taking a nap.

At the time, Alvarado was spotted climbing a ladder and smashing a window with his hand to gain access before he made himself at home and hopped in the shower.  Swift, 29, was also not home during the first break-in.

Alvarado is supposed to be serving five years probation in Florida and also undergoing a mental heath treatment.

His latest arrest is in violation of his probation. 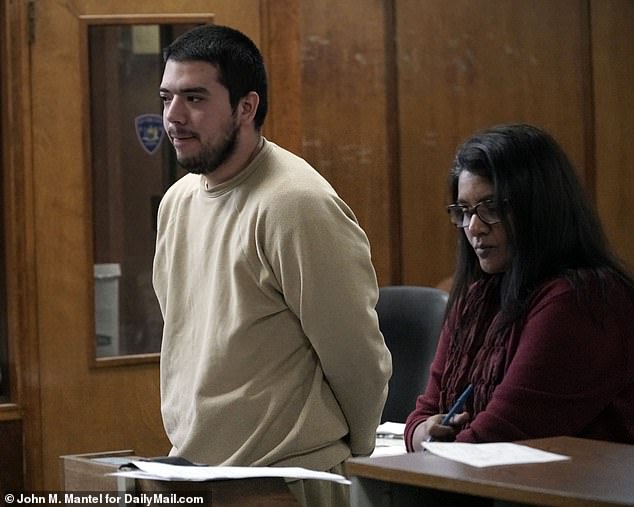 Last month, Alvarado (pictured in December 2018), 22, of Homestead, Florida, pleaded guilty to criminal contempt and attempted burglary. He was sentenced to six months in jail for breaking into the pop star’s home in April 2018 when officers found him taking a nap

Alvarado was also arrested in February 2018 on charges of breaking the front door with a shovel.

A message requesting comment was emailed to Swift’s representative.

This incident comes after Swift recently revealed that she was so shaken by the deadly suicide bomb attack at Ariana Grande’s Manchester concert, that she increased her security at shows and carried gun wound bandages with her wherever she went.

Swift is also no stranger to stalkers, which has prompted her to up her security measures.

In September 2018, she was granted a restraining order on stalker of two years, 26-year-old Eric Swarbrick who had been sending the star letters since 2016.

In one he declared: ‘I want to rape Taylor Swift. This is why I hate Taylor herself … This is how I know I am Taylor’s soulmate.’

He said: ‘I will not hesitate to kill her … and there’s nothing you, your lawyers, or the law will be about to do about it. Remember who I am.’

In April 2018, Julius Alexander Sandrock, was arrested for felony stalking for trying to break into her home, wearing a mask and rubber gloves was a knife, live ammunition, and black rope.

The 38-year-old told police he had driven across several states to meet the star, who was not home at the time of the incident.

Economists reveal it was low-cost and accessible GUNS that drove the violent homicide increase of th...
NFL's TV ratings improve across nearly every network as the controversy over player protests abates
Diet drinks could raise risk of DYING young and increases the chance of stroke 'by nearly a third'
Prince Harry cancels his trip to The Netherlands as wait for Baby Sussex goes on
New Coke, the worst marketing blunder in Coca Cola's history, makes a comeback
Michael Douglas and Catherine Zeta-Jones dine with FOUR generations
Mark Allen dies 10 years after being shot in Afghanistan looking for Bowe Bergdahl
Woman whacks a man over the head with a bouquet of flowers during a brawl at Rosehill Gardens