rebuffed chief constables’ demands for more cash to tackle rising knife crime and told them to use resources they already have to deal with the outbreak of violence.

The Chancellor said instead of asking for money, police forces should transfer staff from ‘lower priority’ crimes.

His comments were seen as a sharp slap-down of Home Secretary Sajid Javid, who this week said Ministers ‘have to listen’ to chief constables ‘when they talk about resources’, while police union leaders called the remarks an ‘insult’. 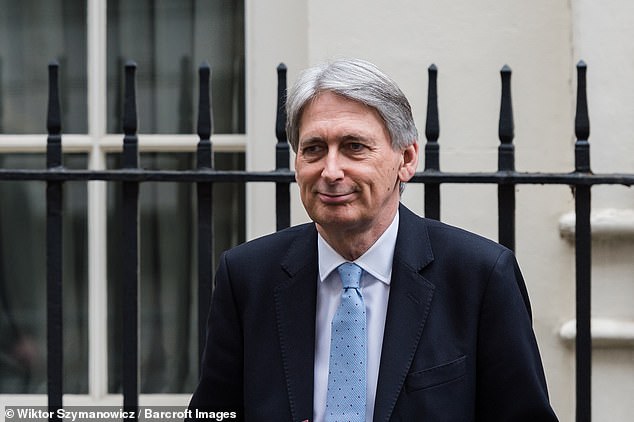 Mr Hammond hinted that uncertainty over Brexit was holding back any boost to spending. He told the BBC’s Today programme: ‘We’ve got adequate fiscal reserves now because the public finances have improved very significantly over the past couple of years, but we’ve been holding those in reserve because of the possibility that the UK would leave the EU without a deal and we would need a pot of money to support the economy through the inevitable disruption that that would cause.

‘Now, if that money is spent on dealing with the disruption of a No Deal exit it can’t be spent on policing, on social care, on schools, on defence and all the things that people want to see money directed to.’

He added: ‘Recruiting and training more officers takes time. What you have to do is redirect resources, change your priorities, to deal with the immediate priority issue.’

John Apter, chairman of the Police Federation, which represents rank-and-file officers, said: ‘It is an insult to my colleagues, and it shows a shocking lack of awareness or understanding of the reality of the crisis happening right now in towns and cities across the country.’

The police have received an extra £460million this year, and will see budgets boosted by nearly £1billion from April. But Downing Street left open the door to coming up with more cash. A spokesman said: ‘There are additional resources but we will always listen to the case made by the police.’

London mayor Sadiq Khan was accused of ‘playing party political games’ last night after he blamed Conservative education policies for the rise in knife crime. Mr Khan told Sky News he had done ‘as much as I am allowed to do under the law’ and blamed the expansion of academies and free schools for leaving councils with little oversight of pupils drawn into violence.

Robbie Williams reveals daughter Teddy, six, wants to 'feed and cuddle' baby Coco 'all the time'
Declan Donnelly poses for sweet family snap with wife Ali Astall and baby daughter Isla
Ulrika Jonsson reveals she had sex ONCE in eight years during her marriage to third husband
Alton Towers Smiler victim who lost her leg in the crash is seen wedding shopping
Jeremy Corbyn is the biggest global threat to Jews, warns world's leading Nazi-hunting organisation
Nacho Figueras heaps praise on 'real' Prince Harry and says he is 'serious' about helping others
Coronavirus UK: Supermarkets limit purchases amid panic-buying
Hundreds across country answer Trump's call to 'liberate' states from lockdown as they protest