R. Kelly accused the parents of the two young women he is accused of holding against their will of ‘selling’ them to him when they were underage in an explosive interview where he yelled, cried and protested his innocence on child rape charges.

Kelly, whose real name is Robert, shouted, screamed and at times spoke directly to the camera while being interviewed by Gayle King for CBS News.

At one point in their interview, the 52-year-old had to be restrained by his publicist and he cried several times. He agreed to speak out to tell ‘the truth’ in light of his recent indictment on child sexual abuse charges which came after a docu-series laid bare the turmoil of the families of the two women he still lives with.

Kelly described Azriel Clary, 21, and Joycelyn Savage, 23, as his ‘girlfriends’ despite both women’s families claiming he brainwashed them after meeting them at concerts when they 17.

The women were interviewed separately in an emotional segment with King that will air on Friday. 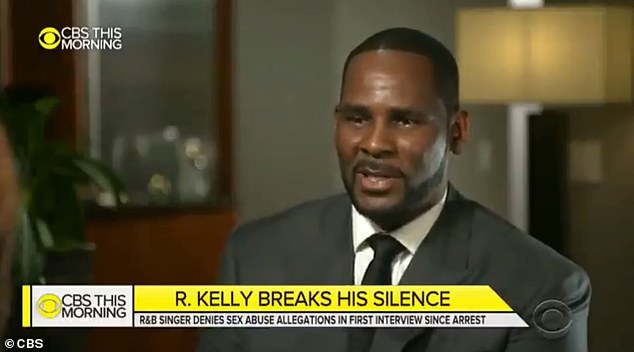 R. Kelly claimed in an explosive interview on CBS on Wednesday that his much younger girlfriends’ parents ‘sold’ them to him but insisted their relationship was above board and claimed to have never had sex with them when they were underage

WATCH: R. Kelly addressed his current relationship with the two young women who live with him at his home in Chicago, 23-year-old Joycelyn Savage and 21-year-old Azriel Clary. Their parents believe Kelly has brainwashed their daughters. 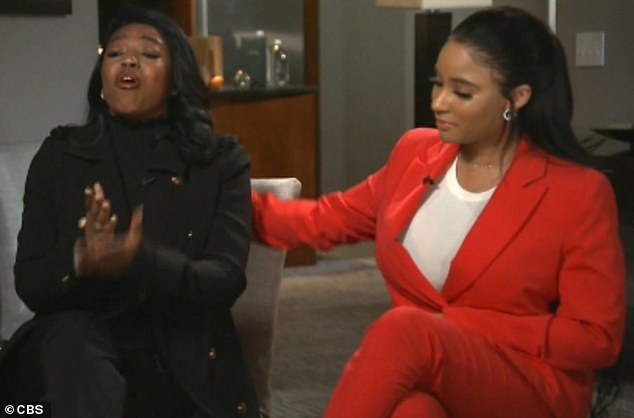 Azriel Clary, 21, (left) and Joycelyn Savage, 23, (right) also gave an interview that will air on Friday where they defend the singer and say their parents, who have been publicly fighting for them to come home, are lying. Their parents and others who know Kelly say they have been brainwashed 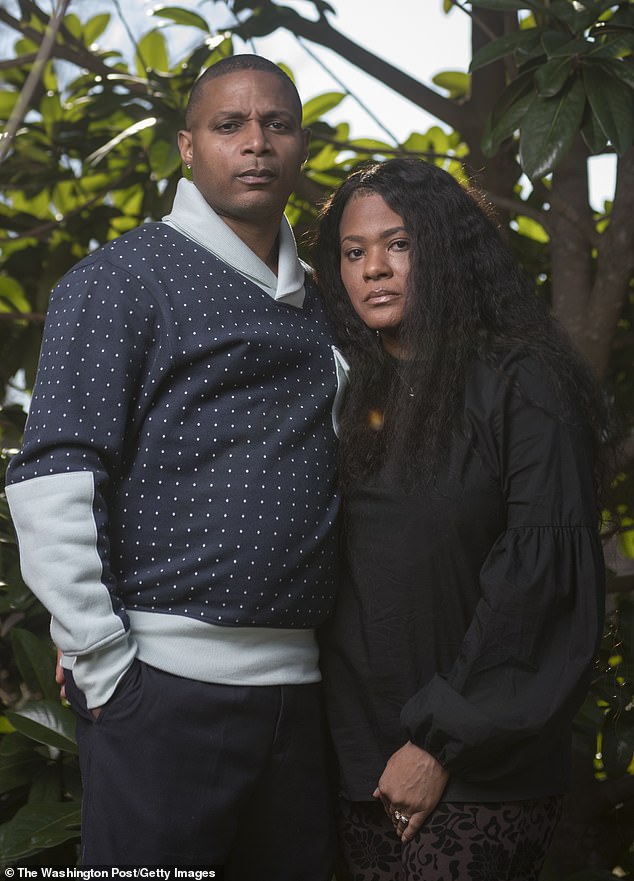 Joycelyn’s parents, Jonjelyn and Tim are shown above. They have been publicly campaigning for years for the singer to be brought to justice and for their daughter to come back to them

King asked him: ‘What kind of love is it that keeps these young women away from their families?’

He gave the shocking answer: ‘I’m going answer your question — what kind of father, what kind of mother would sell their daughter to a man?’

Stunned, King asked: ‘How come it was okay for me to see them until they wasn’t getting no money from me?

‘Why would you take your daughter — if I were going to take my daughter and she’s 19 years old to a 49-year-old icon whatever, celebrity, R. Kelly concert, whoever it is, I’m not going to put her on the stage and leave her.

‘I’m going to take her to the concert. Their father is more into my music and knew about my music than they do,’ he said.

King pushed on: ‘You’re saying the parents handed their daughters, Azriel and Jocelyn, over you to? That’s what you’re saying?’

He replied: ‘Absolutely. Are the cameras still going? Absolutely.’

Elsewhere in the interview, Kelly denied having sex with underage girls and said he never focused on how much younger than him his girlfriends are, just that they are ‘legal’. 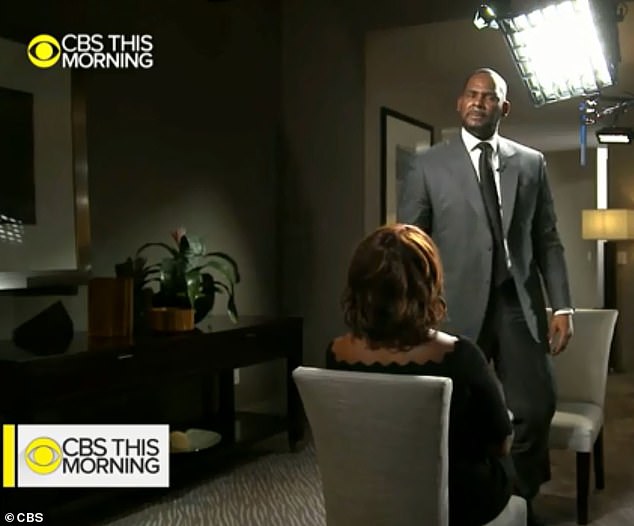 Kelly lost his composure elsewhere during the interview and stood up in a fit of emotion, towering over Gayle King 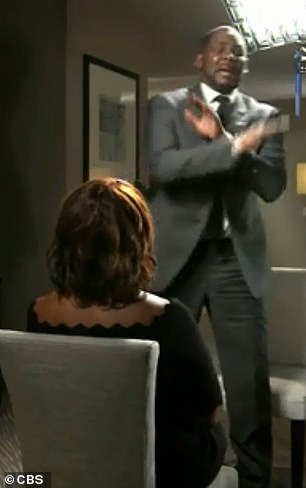 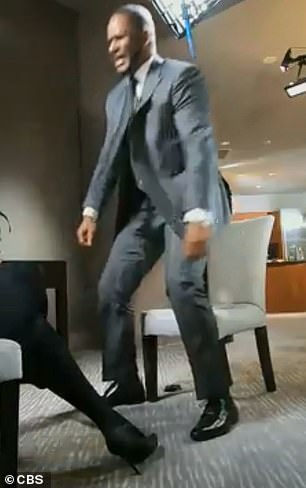 The singer  said he was trying to save his relationship with his children which had been destroyed by the allegations against him. He claims all of the dozens of people who have spoken out against him are lying because they want money from him 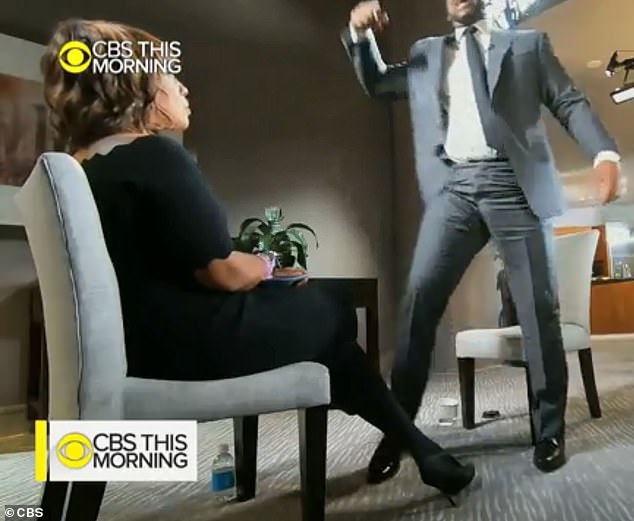 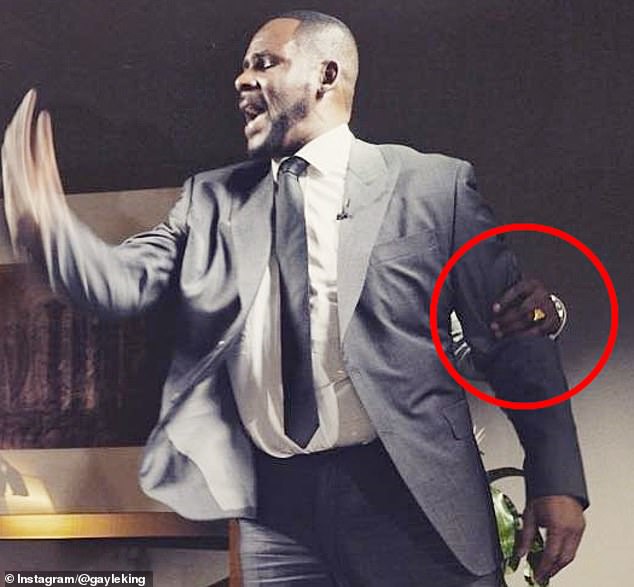 At one stage in the interview, he had to be restrained by his publicist and then take a break 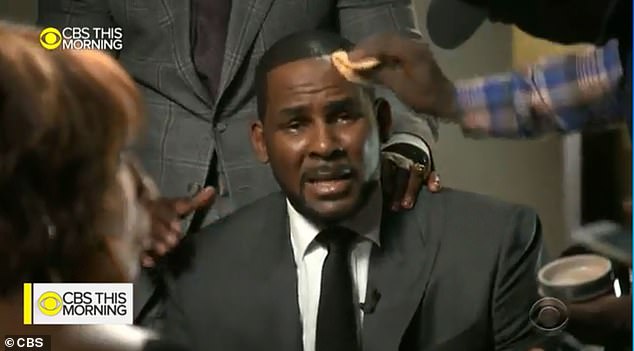 Once back in his chair, Kelly continued to rant into the camera but was redirected by King who told him: ‘We have to have a conversation. I do not want you ranting into the camera, Robert.’

‘I am an older man who loves all women,’ he said.

Kelly’s stance is that all of his accusers and their parents are lying.

‘They’re lying on me…You can start a rumor about a guy like me or a celebrity just like that.

‘If you get any traction from that, if you are able to write a book from that, if you can get a reality show then any girl that I had a relationship with in the past that it just didn’t work out, she can come and say the same exact thing.

‘I’m talking about the power of social media,’ he said.

He believes that they are financially motivated and that their stories have been fed by social media.

He also thinks prosecutors are eager to put him behind bars after failing to convict him on child pornography charges in 2008.

‘That’s stupid! Use your common sense. Forget the blogs, forget how you feel about me.

‘How stupid would it be for me, with my crazy past and what I’ve been through – oh right now I just think I need to be a monster and hold girls against their will, chain them up in my basement, and don’t let them eat, don’t let them out, unless they need some shoes down the street from their uncle!’ he said. 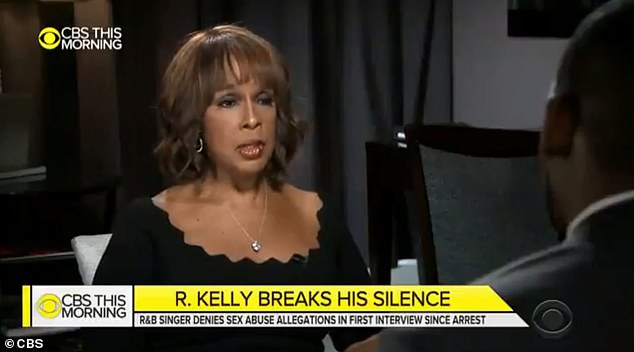 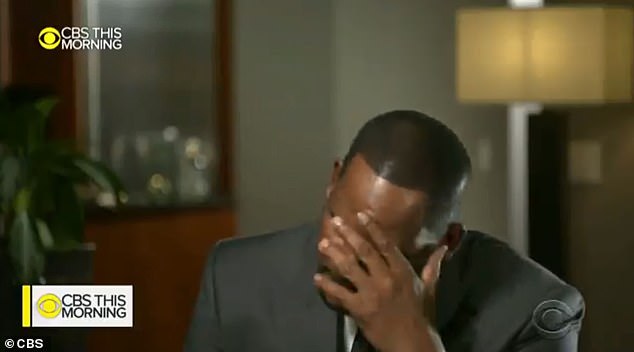 The 52-year-old wept into his hands, said he had been ‘assassinated’ and insisted he was telling the truth

He said he is no longer fighting for his career (but still wants people to buy his music) and is now desperate to salvage his relationship with his children.

In an unhinged monologue to the camera where he stood up, screamed and had to be restrained, he said: ‘Quit playing, I didn’t do this stuff.

King, who has been applauded for his composed demeanor and tough line of questioning during his outburst and throughout the interview, remained seated, encouraging him to calm down.

After a brief pause, he continued back in his chair: ‘This is not true! It doesn’t even make sense! Why would I hold all these women! Their mothers and fathers told me, “We’re going to destroy your career.” 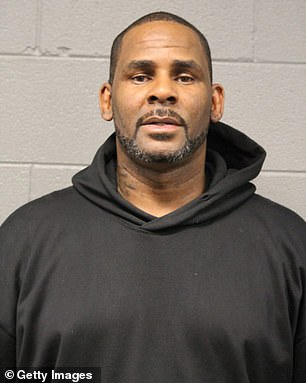 Prosecutors say Kelly’s alleged victims include a teenager he met when she sought an autograph during his 2008 trial on child pornography charges, another he met at her 16th-birthday party and his hairdresser, who was then 24. Kelly’s Feb. 22 mug shot is seen above

‘And they can’t get out and they ending up buried,’ he said.

King, trying to redirecting him, said she was not going to allow him to ‘rant into the camera.’

‘I came here for them to hear me talk!’ he protested, adding: ‘I need help.

‘I need somebody to help me not have such a big heart. Because my heart is so big people betray me and I keep forgiving em,’ he cried.

King, without missing a beat, told him he sounded like he was ‘playing the victim.’

He cried into his hands in response and said: ‘I’m just telling the truth! And the reason I’m emotional is because this is the first time I was able to say something. I have said nothing!’

Kelly also said that he had been ‘assassinated’ and ‘buried alive’, adding proudly: ‘But I’m still alive.’

King also interviewed Savage and Clary, the two girls whose families say are being held against their will.

Azriel was overcome with emotion as she defended Kelly and screamed at King: ‘I am crying because you guys don’t know the truth and you guys believe in some f*****g facade that our parents are saying for money.

‘If you can’t see that then you’re ignorant and you’re stupid!’ She had to be comforted by Savage who said nothing in the teaser. 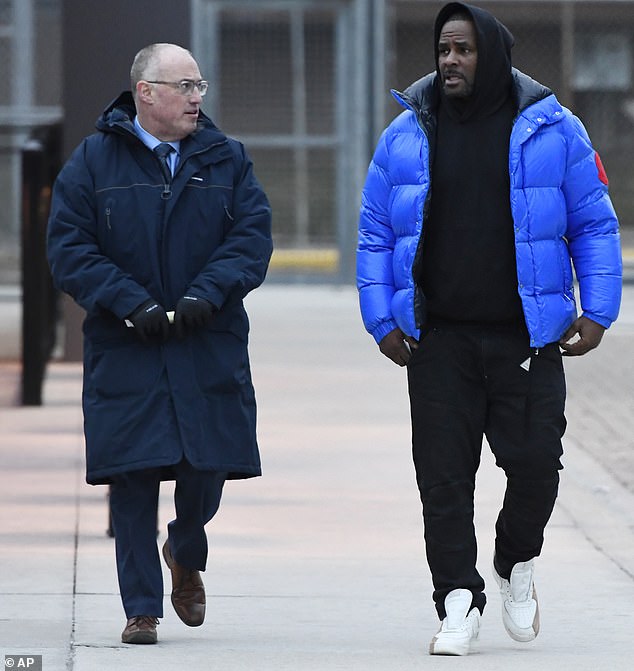 Singer R. Kelly leaves Cook County Jail with his defense attorney, Steve Greenberg, on February 25. He spent three days in jail before he was released on $100,000 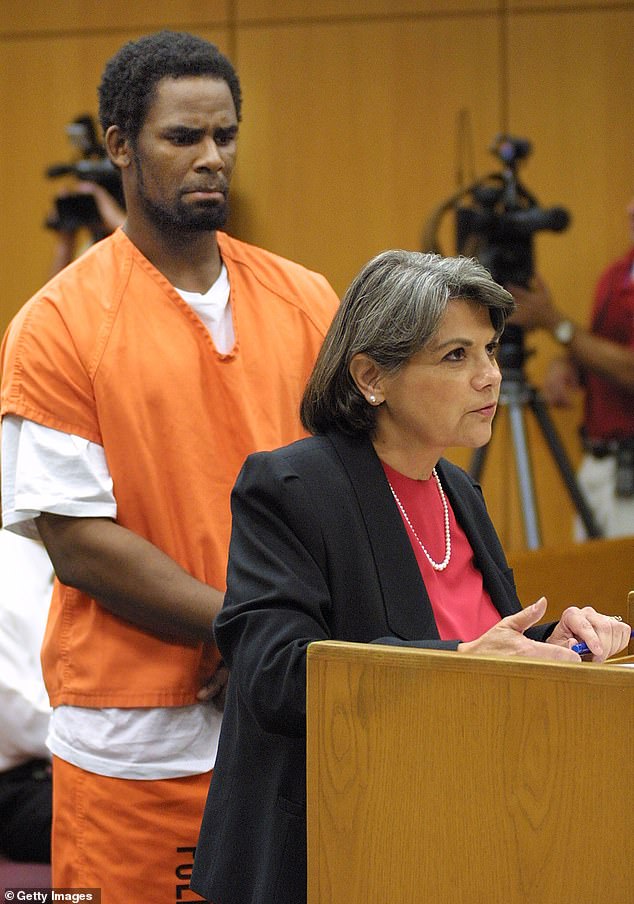 Kelly was indicted in a Florida courtroom in 2002 for filming sex acts between him and a 14-year-old girl, but was ultimately acquitted

Among the evidence against Kelly are videos which allegedly show him having sex with underage girls.

The indictment applies to four women, three of whom were underage when he allegedly had sex with them.

None have been named.

There are dozens more who have accused him of similar crimes and general misconduct against women in the public sphere and in lawsuits.

Kelly was indicted on February 22 in a Chicago courtroom on 10 counts of aggravated criminal sexual abuse against four victims, three of whom were underage at the time the alleged crimes were committed.

If convicted, he could face a maximum prison sentence of 70 years – 7 years for each count.

The singer has pleaded not guilty to all counts

In 2008, R. Kelly, then 41, was acquitted of child pornography charges. He is seen above waving to supporters as he leaves the Cook County Criminal Courts Building in Chicago on June 13, 2008

ADHD consultants say extra youngsters with situation ought to be given medication as just one in ten...
Sandra Bullock's new movies inspires the #BirdBoxChallenge
Insider claims Queen HALTED plans for Frogmore Cottage to be 'independent'
Girl, 12, is 'gang-raped by her uncle and brothers before being strangled and beheaded in India
Trump's FBI director says white supremacy is a 'persistent, pervasive threat' to Americans' security
Shocking moment an 18-wheel truck crashes into a kids daycare center
Joe Biden's son Hunter secretly marries a South African woman last month
Is #PayUp the next movement to hit Hollywood? Assistants demand better pay and better treatment