First lady  challenged the media to give the opioid crisis ‘the same amount of coverage that you do to idle gossip or trivial stories’ at her town hall meeting on Tuesday.

‘I’d also like to take a moment to challenge the media to cover this very real issue as often as possible,’ she said at the International Theater at Westgate Las Vegas.

‘In 2017, we lost at least 72,000 Americans to overdoses – that’s 197 lost American lives per day – more than 8 lost lives per hour. I challenge the press to devote as much time to the lives lost – and the potential lives that could be saved – by dedicating the same amount of coverage that you do to idle gossip or trivial stories,’ she said.

Melania Trump has often expressed frustration with the media’s coverage of her clothing, a common complaint among first ladies.

Overdose deaths from opioids have quadrupled in the last two decades and combating the issue is one of the pillars of the first lady’s signature Be Best campaign. 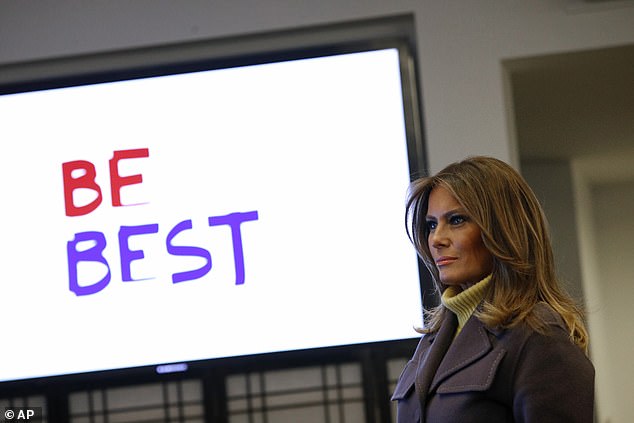 Melania Trump wrapped up her two-day, three-state tour promoting her Be Best campaign with a town hall on the opioid crisis in Las Vegas 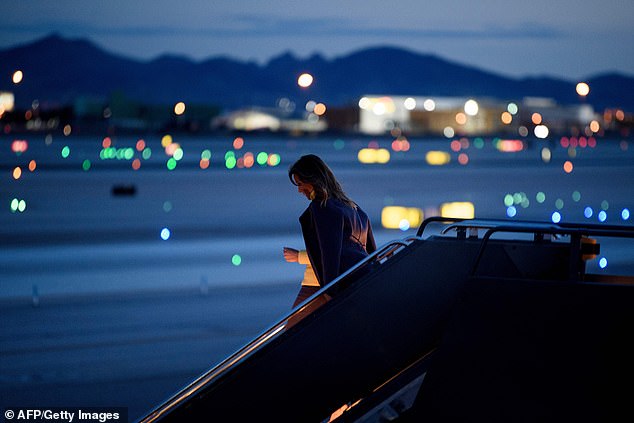 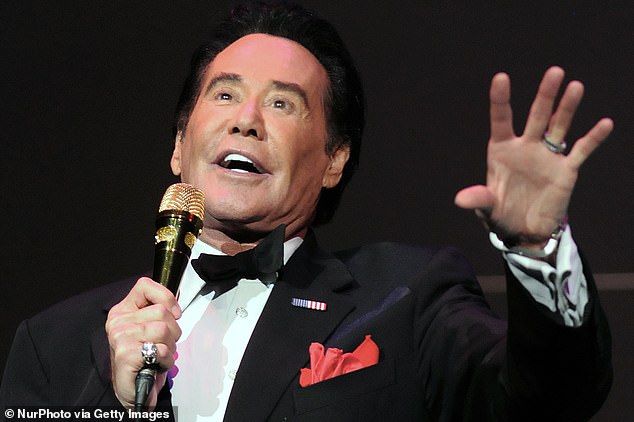 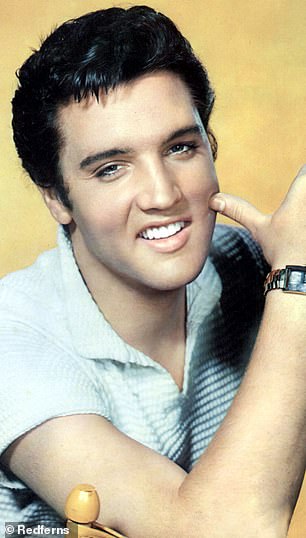 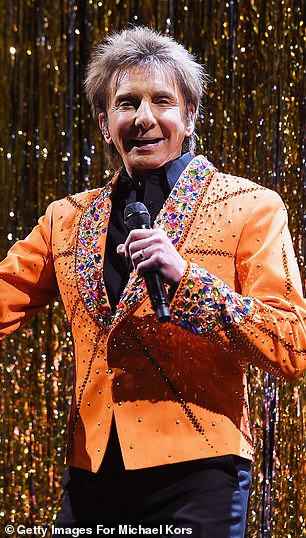 The town hall in Las Vegas is the last stop for the first lady in her first over night domestic tour promoting her signature initiative.

The International Theater at Westgate Las Vegas appeared to be about half full.

It also marked the first time during the two-day, three-state tour where the focus will be her.

She gave remarks and answered questions at town hall unlike her previous stops where she met with students and tech officials and they did most of the talking.

Westgate Resorts founder, president and CEO, David Siegel and his wife Jackie Siegel joined the town hall meeting later to discuss their daughter Victoria ‘Rikki’ Siegel, who died in 2015 from a drug overdose when she was 18.

The couple will discuss their new book on her life: ‘Victoria’s Voice: Our Daughter’s Dying Wish to Share Her Diary and Save Lives.’

The Siegel family gained national attention when they were featured in the 2012 documentary ‘Queen of Versailles.’

Newton and the Siegels arrived to the town hall early to check out the venue. They took their seats in the front row.

The Rev. Jerry Falwell, the founder if Liberty University, also attended. As did an Elvis impersonator.

The first lady’s town hall, part of her signature Be Best initiative, was held on a stage full of local music history: the International Theater at Westgate Las Vegas.

Since 2018, the theater has hosted Barry Manilow’s residency show, The Hits Come Home.

The Westgate Las Vegas was previously known as the Las Vegas Hilton, until Westgate Resorts purchased it in 2014.

It was the largest in the world during the 1980s and its 1,700 seat theater was opened with a performance by Barbra Streisand in 1969.

The town hall meeting was the last event of Melania Trump’s two-day, three-state tour promoting her signature Be Best campaign and its three pillars: the well-being of children, online safety, and opioid abuse.

The venues combined her campaign issues with visits to organizations that have partnered with her Be Best campaign.

Bolling has courted the White House on the opioid issue, which he has become a national voice on in the wake of his son’s death. The first lady met with Microsoft executives at its Innovation and Policy Center in Washington D.C. in July.

Her first stop focused on children, who she designed the Be Best campaign to benefit.

At the Dove School of Discovery in Tulsa, Okla., on Monday the first lady reminded children of the importance of being kind and doing their homework.

She visited with school kids who were learning about team work and over coming obstacles in addition to the typical school lessons of math, science, reading and writing. 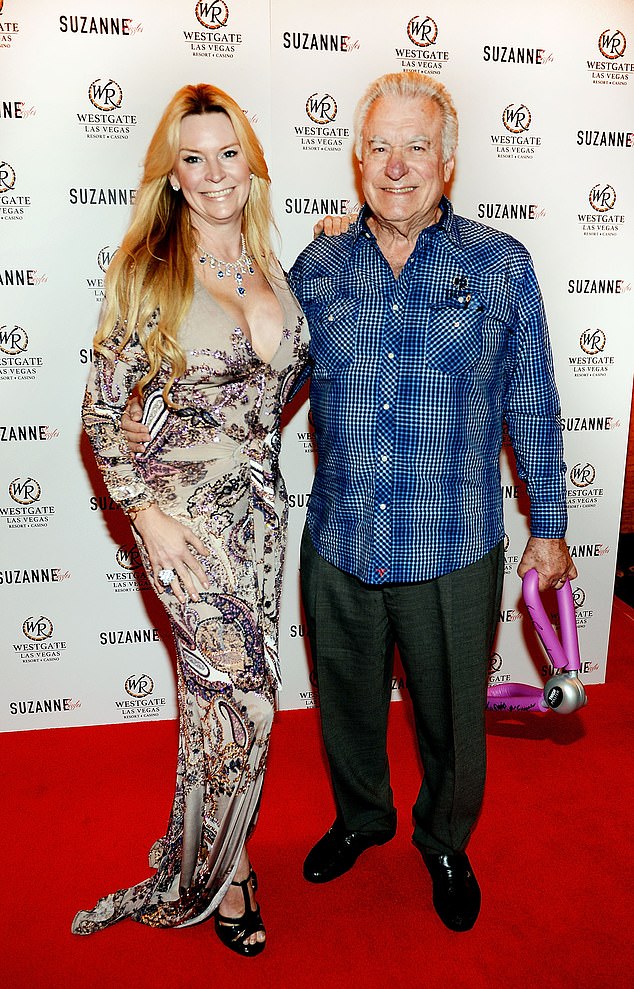 Westgate Resorts founder, president and CEO, David Siegel and his wife Jackie Siegel were at the town hall to talk about their daughter’s death from a drug overdose 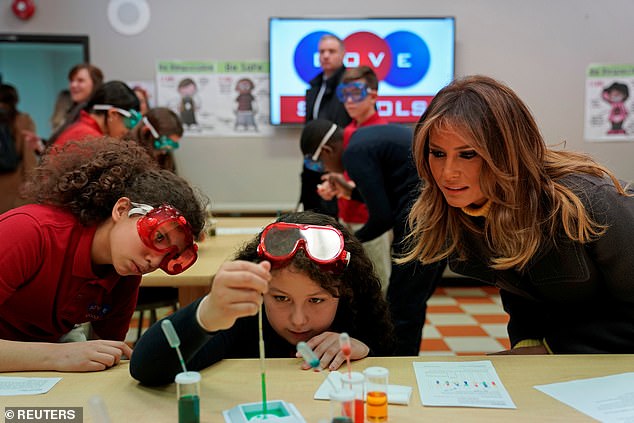 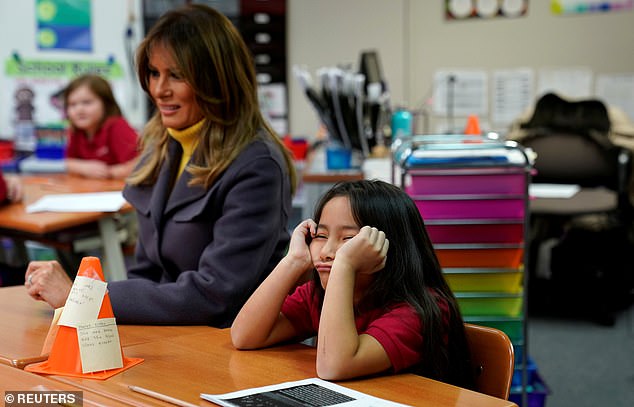 ‘We always need to be kind and show love, correct?’ she said a group of second graders.

And when one young girl noted she was not a fan of homework, the first lady told her: ‘You wished you didn’t have homework? Well everyone wished that but it’s important.’

She reminded the kids homework helped them get smarter.

Her second stop of the day was with the tech giant Microsoft, at its main campus in Redmond, Washington, where she learned about online safety and parental controls.

Dave McCarthy, the General Manager of Microsoft Games, showed the first lady the control options available for parents for their children’s X-box.

He mentioned that his daughter’s Xbox name has the name the princess in it and she’d love that he told the first lady that.

‘The whole world knows,’ Melania Trump laughed when he gave the online moniker.

She also learned about a devise that allows those with disabilities to use computers and play games easier.

‘Children can play, everyone can play together,’ the first lady said.

Her Monday and Tuesday trip marked the first over night domestic trip for Melania Trump where the focus was on her Be Best campaign and not an event with her husband. 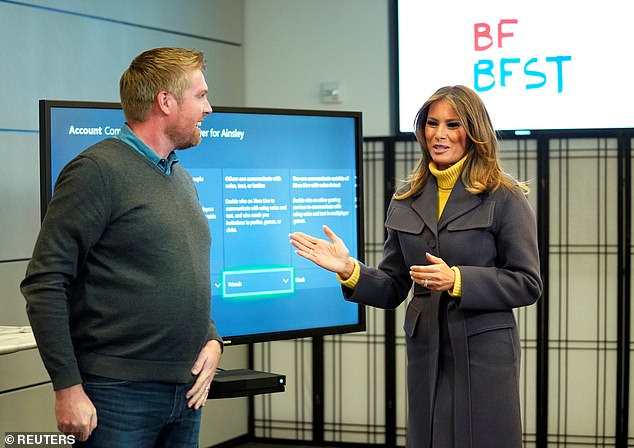 Dave McCarthy, the General Manager of Microsoft Games, showed the first lady the control options available for parents for their children’s X-box 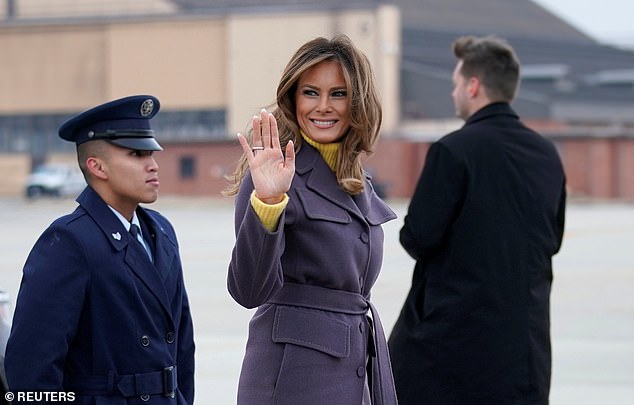 Melania boarded a government jet on Monday at Joint Base Andrews in Maryland en route to Tulsa, Okla., to begin a two-day, three-state swing to promote her Be Best campaign

Melania Trump has promoted her Be Best campaign in the Washington D.C. area and on day trips including an October trip to a children’s hospital in Philadelphia. She has also made day trips to the U.S.-Mexico border to visit migrant children separated from their parents under her husband’s immigration policy.

She also made a four-day trip to Africa last year, her first solo overnight trip as first lady.

This is the first lady’s second town hall with Bolling on the opioid crisis.

At that event, shedefended her controversial red  trees at the White House as ‘fantastic’ and says son Barron is not on social media yet.

Melania Trump was asked by Bolling about what she talks about with her 12-year-old son Barron when it comes to drug addiction.

‘I always tell him drugs can be very dangerous and mess up your mind and body,’ she said. ‘And to love yourself more than you love drugs.’ 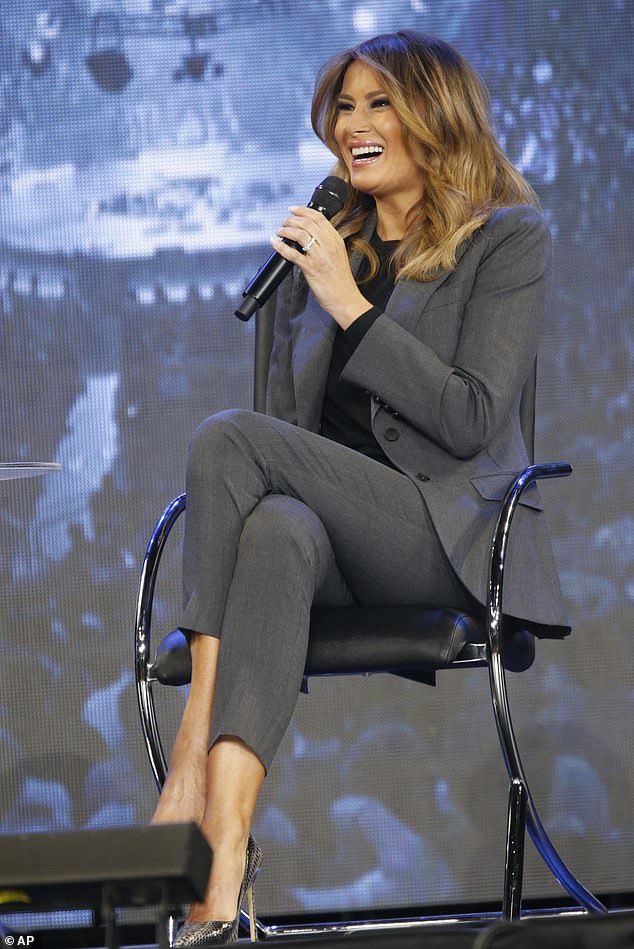 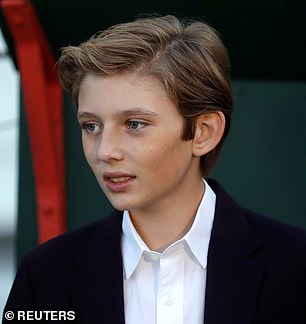 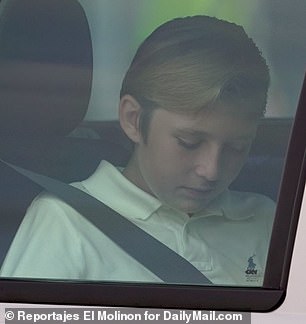 12-year-old Barron has previously been spotted using a cellphone, however Melania said in November he doesn’t have social media, because he’s currently too interested in sports

She also said her son, who was spotted carrying his mobile phone onto Air Force One when he left Mar-a-Lago with his parents at the end of his Thanksgiving break, has no social media accounts.

‘He doesn’t have a social media yet. He’s not interested in it. He’s all into sports. He’s a great athlete,’ she said.

‘I teach him to be responsible and treat all people with respect and kindness,’ she added. ‘That is very important to me.’

Melania also said she knew she would be criticized when she made anti-bullying one of her initiatives with some critics pointing out one of the biggest offenders is her husband.

‘I knew that I would be criticized but I would do what is right for the next generation,’ the first lady said.

‘Sometimes you need to fight back, I’m sorry,’ she added.

Amal Clooney exudes magnificence in a yellow maxi gown on dinner date with husband George in Lake Co...
John Roberts to decide case of 'mystery state-owned foreign company' refusing to comply with Mueller
Denmark rail crash may have been caused by beer crates, police say
Horrific moment mother beats her disabled 10-year-old son
Michael Jackson accusers reveal how he 'raped them at Neverland'
R Kelly trial judge to decide whether cameras will be allowed in court as star faces sex abuse trial
NYC Mayor Bill de Blasio demands more body storage, predicts school is out until the end of the year
CNN host Erin Burnett breaks down during interview with widow whose husband died from coronavirus