An arsonist killed a fire safety officer when he set a hotel ablaze in the middle of the night after hiding the fire extinguisher.

Damion Harris, 31, had been out drinking before he arrived back at the Ty Belgrave House in the early hours of the morning during the height of tourist season.

A court heard that all 16 guests at the sold-out boutique hotel in Aberystwyth, West Wales, were asleep when thick smoke began to fill the building after Harris started a fire in its basement.

Men, women and children were forced to climb to the hotel’s roof and some even jumped from balconies to escape the flames in the early hours of July 25 last year.

Richard Simnett fell from the hotel’s steep slate roof and suffered a number of serious injuries after he helped his partner and two sons aged five and four out of a window. 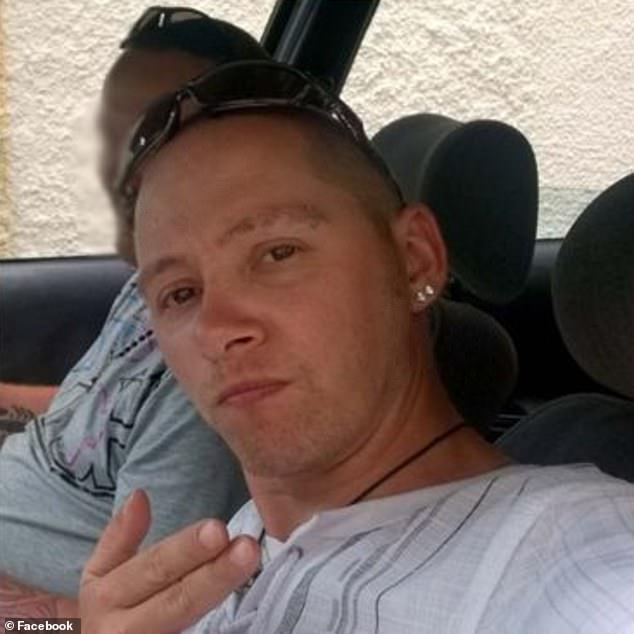 Damion Harris, pictured, killed a fire safety officer when he set a hotel ablaze in the middle of the night after hiding the fire extinguisher 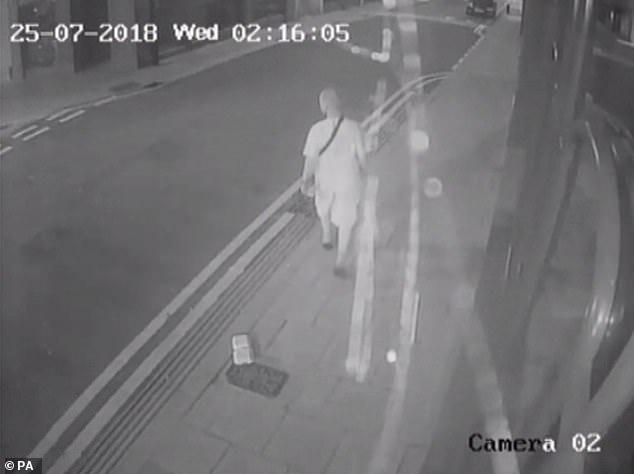 Juozas Tunaitis, 48, who was staying at the hotel while working as a fire safety contractor at Aberystwyth University, was the only guest who failed to escape and his remains were found underneath the collapsed building nearly two months later.

On Tuesday, Swansea Crown Court heard Harris used a cigarette lighter to set fire to a cupboard full of towels and sheets after he sneaked into the hotel around 2am after drinking in a pub and a nightclub.

Prosecutor Michael Jones said: ‘It was a hotel on the seafront during the summer at the height of tourist season.

‘He must have known there were a large number of guests at the hotel at the time and were asleep.

‘He carried out a clearly deliberate and obviously dangerous act. It was likely to result in serious injury or death, and that is indeed is what occurred.’

Harris was caught on CCTV removing a fire extinguisher from a wall in the reception area and hiding it on an upper level before returning downstairs to set a pair of net curtains on fire.

The flames on the curtains self extinguished but Harris entered the hotel’s basement and then set fire to a cupboard containing linen before making his escape.

The court heard the the fire spread upwards and thick smoke woke up a number of the guests, including Mr Simnett, 42, who was on a family holiday with partner Caroline Latham and their two young boys.

The family escaped to the roof after Miss Latham made a 999 call to the fire service which was played in court.

Miss Latham said: ‘Two children, four and five. We’ve tried to get down the stairs but we can’t. There’s thick smoke.’

Miss Latham is heard telling her son’s ‘Hold hands, boys, stay together’ after they were lifted by their father to the hotel roof, and then instructed them to recite their five times table to distract them after their father slipped and fell.

Mr Simnett landed on a handrail which broke his fall some 12 to 14 feet above ground level, and he survived with fractures to his vertebrae, his collar bone, his sternum, seven broken ribs and suffered a broken right arm which has left him without sensation in some fingers. 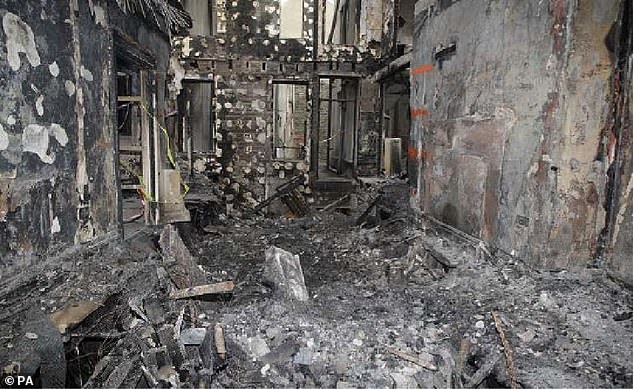 Men, women and children were forced to climb to the hotel’s roof and some even jumped from balconies to escape the flames 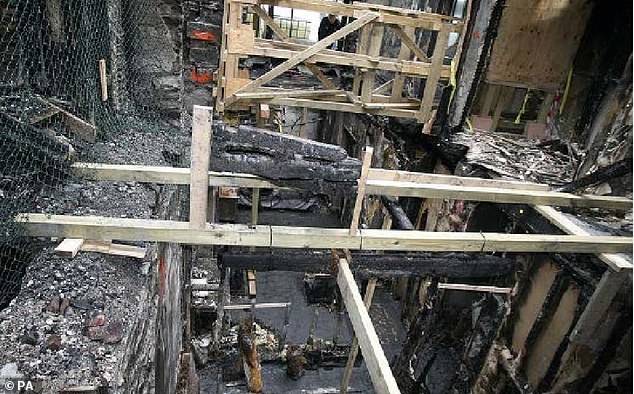 Juozas Tunaitis, 48, was the only guest who failed to escape and his remains were found underneath the collapsed building nearly two months later

Miss Latham and her two children were helped down from the roof by firefighters who used a cherry picker.

Mr Tunaitis, the only person to die in the fire, was seen poking his head from his room’s window on the second floor by his three colleagues after they managed to escape their own rooms into the street.

Fellow contractor Zydruna Sedys said he tried to wake up Mr Tunaitis but failed to get him out before he was forced to escape the building by sliding down a white support structure from a balcony. 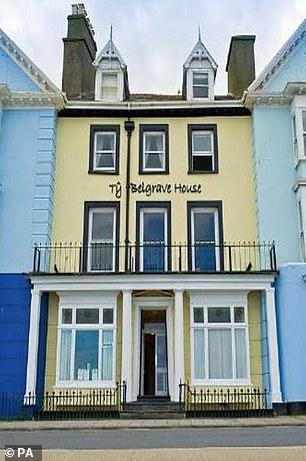 He told police he shouted to Mr Tunaitis in Lithuanian to jump down from a balcony, but never saw him again after police moved him and others away from the scene.

Mr Tunaitis was found on September 10 by a forensic archaeologist, but his remains were so badly damaged he could not be identified until 16 weeks later on November 15.

A post-mortem examination could not determine whether he died from smoke inhalation or directly from the fire.

Shortly after the fire, Harris was found by a policeman slumped in the street with his t-shirt over his head and was described as ‘heavily intoxicated’ before he walked home.

Harris was later identified using CCTV and was arrested on suspicion of arson, denying to police ever entering the hotel, before saying he been threatened by an unknown man to set the hotel on fire or else his family would be harmed.

On Monday, Harris, from Llanbadarn, Aberystwyth, pleaded guilty to manslaughter, arson and inflicting grievous bodily harm with intent on the day his trial was due to begin.

He was originally charged with the murder of Mr Tunaitis, but his guilty plea to the alternative charge of manslaughter was accepted by prosecutors.

Alec Baldwin resurfaces in Hamptons wearing same clothes for third day after assault, Hilaria in NYC
Norovirus found in fruit and vegetables in British supermarkets
More misery for passengers as rail workers plot a fresh round of strikes
People trapped in blazing tower block 'jump to their death trying to escape' in Bangladesh
David Gower and Sir Ian Botham sign off after final Ashes Test on Sky by clinking wine glasses
Taxpayers foot legal aid bill for one in six extremists who appeal against citizenship deprivation
Anthea Turner reveals she's postponed her wedding due to COVID-19 crisis
Parents back headmistress of £40,000-a-year Kent girls' boarding school in racism row